Gladys Berejiklian will lift the curfew in Sydney’s local government areas of concern at midnight as New South Wales records 1259 cases new cases of coronavirus and 12 deaths on Wednesday.

The premier announced the curfew on the 12 LGAs of concern will be lifted from midnight as the state looks to move towards unlocking its residents after hitting 80 per cent first-dose vaccination rates.

She said the ‘stabilisation and decline’ in the areas of concern led to the decision but urged Sydneysiders to remain vigilant as the state approaches the end of lockdown.

‘We’ve seen a stabilisation in the last few days and we don’t want to see that trend go the wrong way,’ she said.

Among the 12 deaths reported on Wednesday included a woman aged in her 30s. A man aged in his 90s who was double vaccinated also died.

The premier also confirmed that a health order will be released mandating only vaccinated people will be able to attend the businesses listed in the state’s roadmap, with unvaccinated residents to be locked out of hospitality and retail venues. 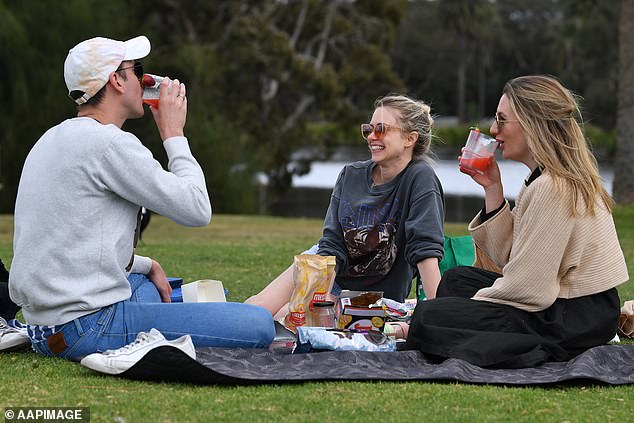 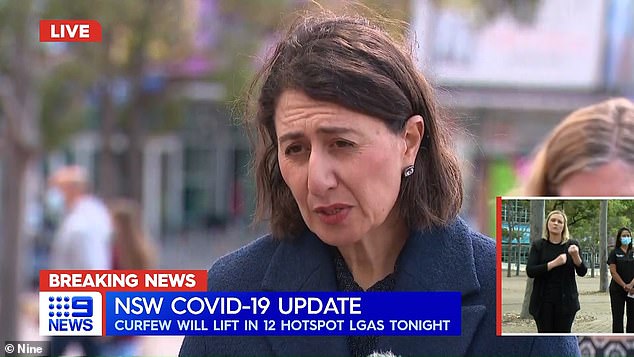 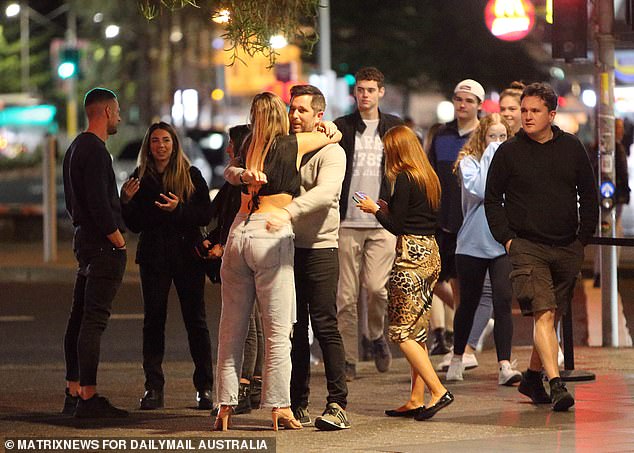 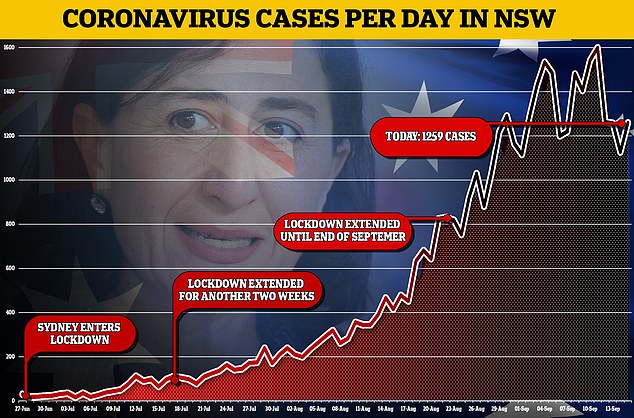 ‘We’ll have the vaccination passport in New South Wales when we hit 70% double dose. You’ll be able to check in with your QR code and see whether or not you’re vaccinated and that’s really important,’ she said.

‘All of us are looking forward to that time but we’re all in uncharted territory. The government will need to seek legal advice ourselves.

‘This is uncharted territory but we’re providing as much certainty as possible, as much as we know exists at 70% double dose and in good time, with plenty of notice, we’ll be giving everybody a road map as to what 80% double dose looks like.’

She said the lifting of curfew in the 12 LGAs of concern was a ‘token of our appreciation’ after the state broke the 80 per cent first dose barrier.

‘Please remember that even in our community we have roughly 2.2 million people in those areas of concern,’ the premier said.

‘Even having 20% of them not vaccinated is about 400,000 people. That’s a lot of people. When the virus is still circulating in high numbers. So we have to be aware of that at all times.’

Ms Berejiklian was asked about low rates of vaccination in Byron Bay, saying it was their right not to get the jab but they would be disadvantaged as far as restrictions go.

‘Some communities like Byron have a larger percentage of people who choose not to be vaccinated. That’s their choice but they won’t be able to participate in the activities vaccinated people will,’ she said.

Sydney’s Covid outbreak prompted a huge increase in jabs with the 70 per cent double-dose threshold needed to lift lockdown predicted in just 27 days.

Pubs, restaurants and retail are set to open from mid-October, with people allowed to have five fully vaccinated friends over indoors and gatherings of up to 20 outside. 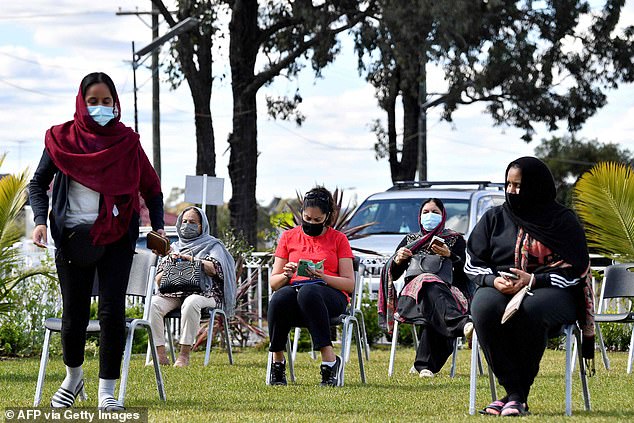 ‘I cannot stress enough how important it is for people to get vaccinated – if you have not had both doses of the vaccine by the time we hit the 70 per cent milestone, you will not be able to take advantage of these freedoms,’ Ms Berejiklian said 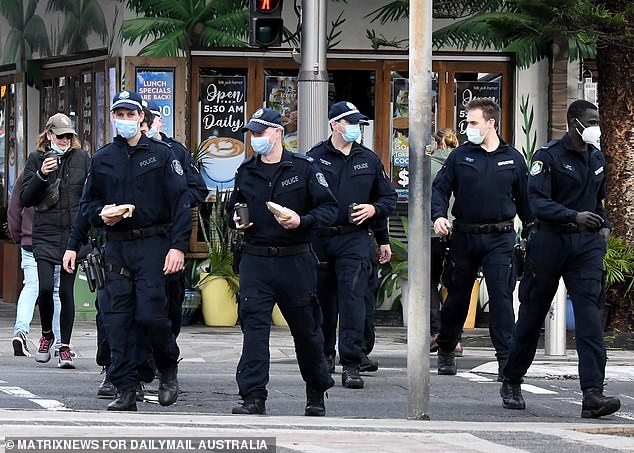 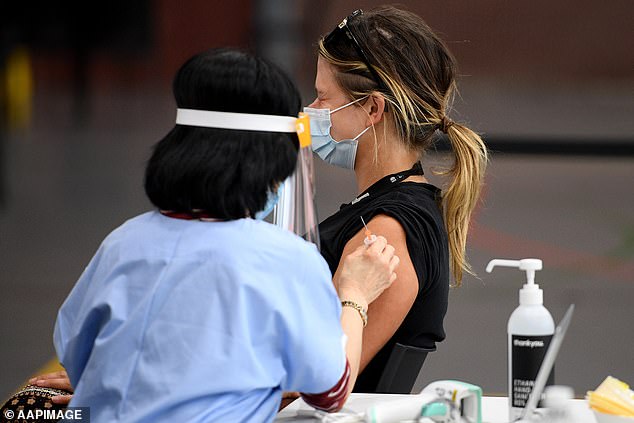 NSW will hit 70 per cent double vaccinated in 27 days on October 11, which should see the lifting of the lockdown which has been in place since June 25 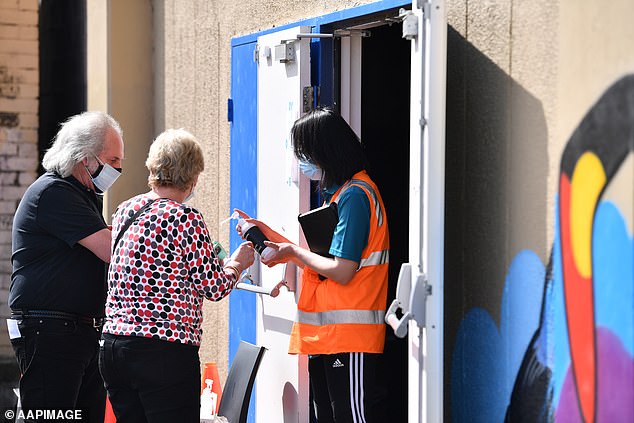 The only other state or territory in the 70s for first vaccines is the ACT, which has handed out jabs to 75.9 per cent of its population.

Based on the current seven-day averages, the ACT will be the first to hit 70 per cent double dose, which should fall in 24 days if the same trend continues.

NSW will hit 70 per cent double vaccinate in 27 days on October 11, which will see the lifting of the lockdown that has been in place since June 25.

That milestone will see up to five fully vaccinated visitors allowed into homes where all adults are immunised, and 20 allowed to meet outside.

Hospitality and retail will be allowed to open under the one person per four square metre rule, with bars and restaurants permitted to have one person per two sqm outside.

Gyms and indoor recreation facilities will also reopen at 70 per cent, as will hairdressers and salons. They will all fall under the one person per 4sqm category.

NSW should then hit 80 per cent double vaccinated 12 days later on October 23, where restrictions will ease further and sport stadiums will reopen. 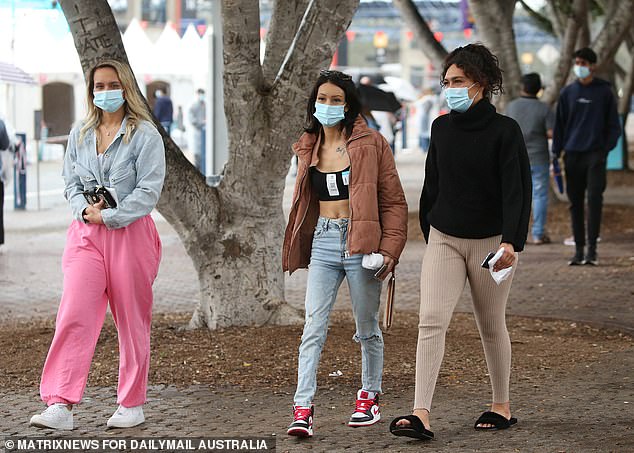 Hospitality and retail venues will be allowed to enter under the one person per four square metre rule, with bars and restaurants permitted to have one person per 2sqm outside 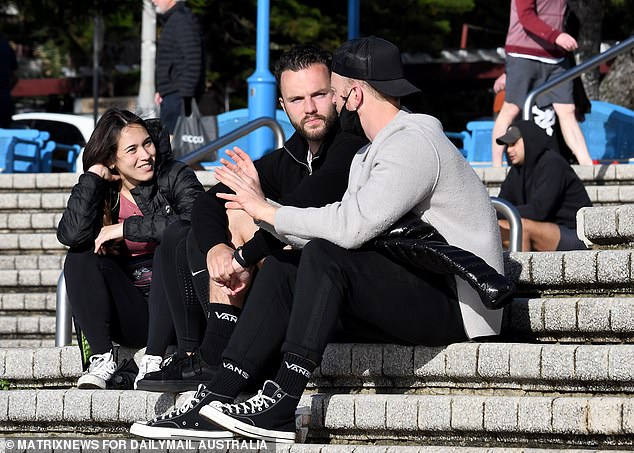 The 70 per cent milestone will see up to five double vaccinated visitors allowed into homes where all adults are vaccinated, with 20 double vaxxed allowed to meet outside

Victoria is the next-best jabbed state with 67.6 per cent of the population having received their first jab, with its end of lockdown target of 70 per cent falling on November 17.

That date should come forward as a large shipment of Pfizer vaccines is sent to the Garden State from the federal government as announced on Sunday.

Queensland has the lowest vaccination rate in the country at just 57.1 per cent of its population with a single dose, but seven-day averages will see them hit 70 per cent double dose before Victoria on November 14.

Western Australia has the second lowest vaccination rate at 57.6 per cent, with national criticism being directed at Premier Mark McGowan who refuses to co-operate with other leaders and open his state to the rest of the country.