‘Don’t come in’: Top cop warns protesters will be met by 1,000 police officers if they try to storm Sydney’s CBD this weekend – and they’re easily able to quell uprisings in other suburbs

NSW Police Commissioner Mick Fuller warned any anti-lockdown protest in the Sydney CBD this weekend would be met by 1000 police officers.

‘Please don’t come into Sydney tomorrow to protest,’ he said at the NSW Covid update on Friday morning.

‘If you do, you will be met by up to 1000 police who will be ready to deal with you, whether that be via the health orders or other laws.’

‘This is such an important time for New South Wales in terms of winning the battle against the virus and coming into town to protest is not the answer.’ 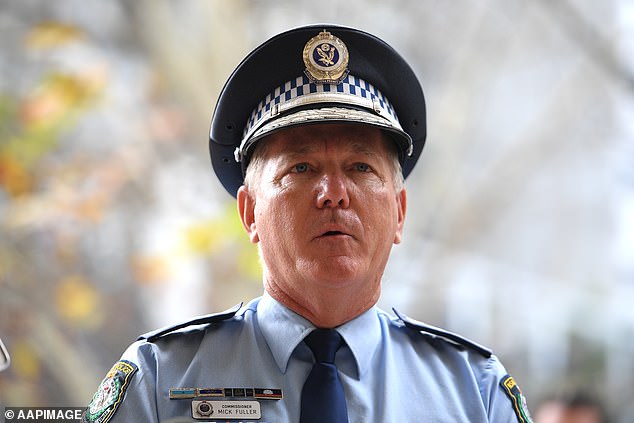 ‘If you [protest], you will be met by up to 1000 police who will be ready to deal with you, whether that be via the health orders or other laws,’ NSW Police Commissioner Mick Fuller said at Friday’s Covid update

Commissioner Fuller said that any protest in another area of Sydney would also be met with force by NSW police.

‘[Our] force will be mobile and will be waiting to you,’ he said.

‘You have been given plenty of warnings.

‘The strike force from last week is locked up over 60 individuals and issued over 200 infringements and that will continue. ‘

‘If you turn up, you can expect the same sense of force.’ 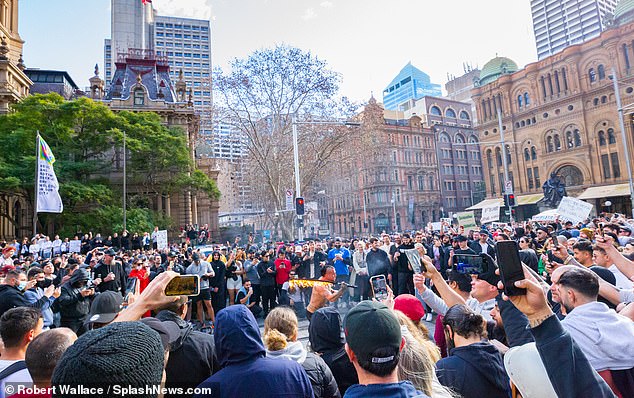 Around 3,500 protestors turned up to a ‘freedom’ rally in the Sydney CBD last weekend 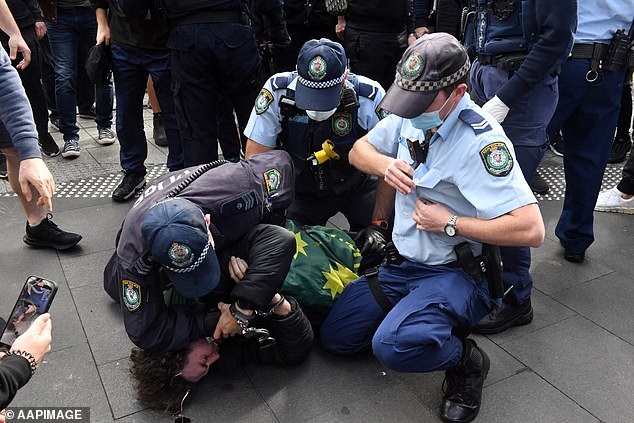 The Commissioner said intelligence suggested police should expect a protest in Sydney this Saturday.

‘Protesters are using chats and other forums so it has been more complex to work out numbers,’ he said.

‘From our perspective we have to expect it will be a protest. It appears it will not be in the same numbers but it can be a small group of people and can still look untidy and can still be violent.’

Asked whether all offenders from last weekend’s rally in the Sydney CBD had been identified, Commissioner Fuller said police were still looking for some offenders.

‘There are still three individuals that exhibited violence,’ he said.

Chief health officer Kerry Chant said NSW Health had not seen any new cases of Covid related to last weekend’s protest as yet, but were concerned about one person who had tried to attend the protest and had since tested positive to Covid.

‘We are following up one person to ascertain whether they actually had made it to the protest,’ she said.

‘Police did turn that person away and issued an infringement to them.

‘We are currently working with police operationally to locate that person and determine whether they actually did subsequently attend the protest.’

‘You have to be crackers to go to that demonstration tomorrow because there will be a lot of people potentially that a deadly weapon, Delta virus,’ he said.