Scottish government faces backlash after tweeting that 55,000 pregnant ‘people’ had received Covid jab instead of women

By Katie Feehan For Mailonline

The Scottish Government is facing a backlash after sharing a post on social media that said 55,000 ‘people’ had been vaccinated instead of using the word women.

The post was shared in a bid to offer reassurance that the Covid vaccine is safe to be used during pregnancy and was shared on Twitter and Facebook.

It reads: ‘Over 55,000 pregnant people in England & Scotland have had the #coronavirus vaccine.

‘It’s the best way to protect you and your baby from the risks of the virus during pregnancy.

‘Know how to find the right information. Speak to your healthcare professional or go to NHS Inform.’

But the post quickly attracted a wave of criticism from social media users who took issue with the use of the word ‘people’. 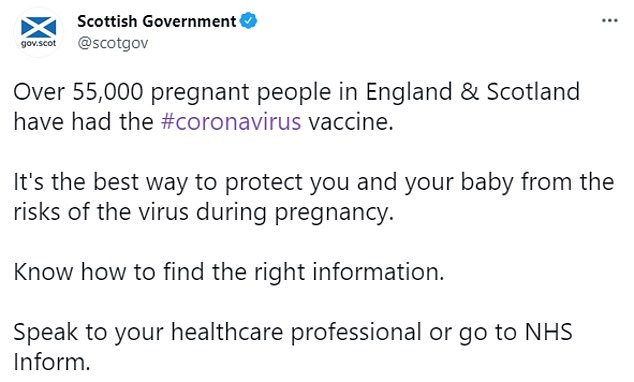 GB News presenter Colin Brazier added: ‘The Scottish Government should worry about having a record low (and the UK’s lowest) birth rate, rather than whether “people” get pregnant, not “women”.’

A midwife on social media said: ‘The word you were searching for is WOMEN. I can assure you, after almost 30 years as a midwife, it is only WOMEN who can get pregnant.’

Another added: ‘I believe there is a typo in this article….As far as I believe it’s only WOMEN who get pregnant so therefore it should read Pregnant Women NOT pregnant people……please amend.

‘Is my government now trying to erase the word Woman???’

A third social media user wrote: ‘Sorry, but what are ‘pregnant people’? All my life, the word pregnant has been applied to women only. 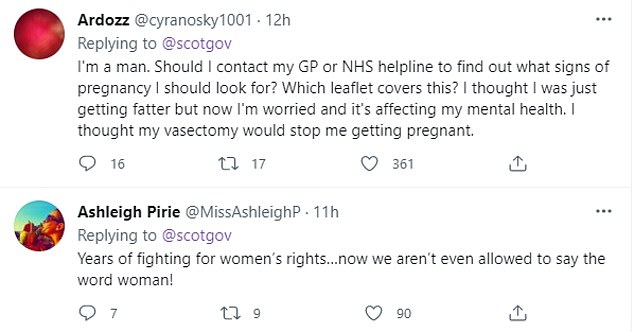 ‘What has changed *in anyone’s biology and physiology* to change that? Nothing.

‘You mean ‘pregnant women’, and that is what you should say.’

However, some social media users welcomed the use of the word people and branded it as inclusive.

One wrote: ‘Replies to this are awful. Thank you for using inclusive language, and I hope that those people realise that a) trans people should be included for health reasons and b) trans people aren’t the only situation where someone who prefers a term other than “woman” may get pregnant.’

Another added: ‘Not everyone who has a baby identifies as a woman. That may be difficult for lots of you to understand but it should not spark rage.

‘Including them does not exclude you. Try some compassion.’ 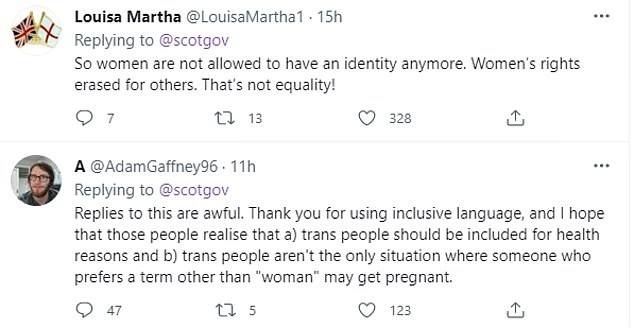 A third user wrote: ‘The replies to this are toxic but inclusive language is appreciated by a lot of people.

‘My friend would have hated to be called a woman when going through her pregnancy; the little things make a world of difference.’

The post was intended to assure people that the Covid vaccine is safe during pregnancy.

It includes a link to the NHS Inform website which offers all the information surrounding vaccination on pregnancy and repeatedly uses the term ‘pregnant women’.

The site reads: ‘The Joint Committee on Vaccination and Immunisation (JCVI) has advised that all pregnant women should be offered the coronavirus vaccine at the same time as people of the same age or risk group. 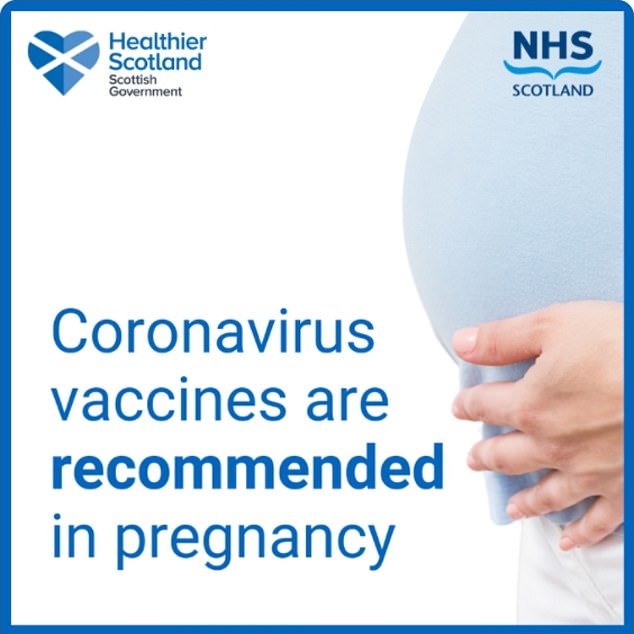 ‘This means you could be invited to have the coronavirus vaccine at any stage of your pregnancy, depending on when you become eligible.

‘The coronavirus vaccine can be given at any stage during pregnancy.’

It goes on to say that the Pfizer BioNTech and Moderna coronavirus vaccines are the preferred vaccines for ‘pregnant women’ of any age, because of more extensive use in pregnancy.

It adds: ‘Pregnant women who received a first dose of the AstraZeneca coronavirus vaccine are advised to complete the course with the same vaccine.’