A killer posed his girlfriend’s body on her bed and used nail varnish to daub the words: ‘It was me!’ on her skin after he strangled and stabbed her to death in a sickening ritualistic murder.

Daniel Smith, 41, left the macabre boast on the right leg of Imogen Bohayczuk, 29, after laying out her corpse and arranging her arms and legs like an ‘exhibition’ before going on a spending spree with her bank card.

Police who arrived at Miss Bohayczuk’s home in supported accommodation in the Bardsley area of Oldham, Greater Manchester, found that her arms were crossed and she appeared to be clutching a bottle of perfume.

A soft children’s toy had been left by Miss Bohayczuk’s neck and her legs were crossed at the ankle, while attempts had been made to clean the scene before detectives got there in March.

Prosecutors said the posing of the body had been ‘arranged as though she were a spectacle’ – and Smith said: ‘I did what I felt was right. It was her favourite bottle of perfume, her favourite teddy.’

On the day she died on February 18 this year, she twice made 999 calls to police and sent messages to an ex-boyfriend, saying: ‘He strangled me so much I nearly died and then he got a knife. I though was going to die.’

Officers only arrived at the house 24 hours after the calls and then promptly left when they got no answer. The victim’s body lay undiscovered for two weeks until a housing officer made the grisly discovery on March 4.

Today it also emerged that Smith had previously subjected a string of ex-lovers to controlling violence. An investigation is now ongoing into why police failed to respond to Miss Bohayczuk’s SOS calls more quickly.

When interviewed, Smith also said he accepted he was responsible for her death but he claimed it was ‘out of character’ and he had drunkenly daubed on her leg merely to make it clear he had inflicted the injuries. 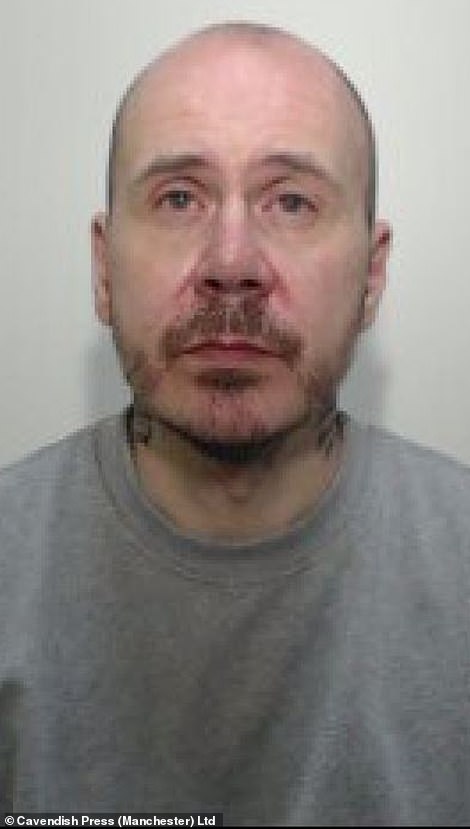 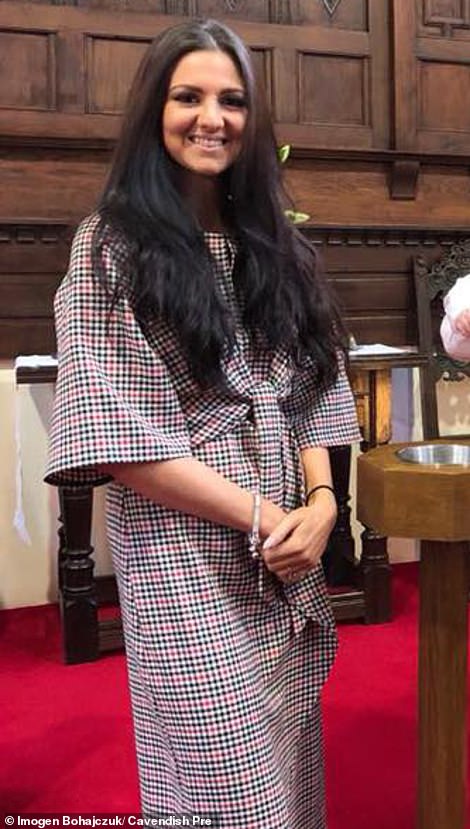 Murderer Daniel Smith (left), 41, desecrated the body of his girlfriend Imogen Bohayczuk (right), 29, by daubing ‘It was me’ in red nail varnish on her leg in an ‘act of callous and cruel triumphalism’

Today, Manchester Crown Court heard Miss Bohayczuk had been in a violent and abusive relationship with Smith, who was jailed for life after admitting murder earlier this month.

The court heard Miss Bohayczuk, who had a son by a previous relationship, worked as a carer but was said to be ‘vulnerable’ and met Smith last year. Nicknamed ‘Boxer’, he was said to be a ‘violent and manipulative man.’

Tim Storrie QC, prosecuting, said an ex-partner had a ‘long and significant relationship with him in the late 90s and gives an account of his controlling behaviour that involved threats with knives and being thrown down the stairs’.

He added of the ex-partner: ‘She was so distraught she contemplated taking her own life. He manipulated her by convincing her that he had been diagnosed with a cancer but this was nothing more that a shameless lie.

Mr Storrie said another former girlfriend recalled ‘how she was terrorised by him during a relationship which saw them move from the Isle of Wight to Tameside in the 2000s’, adding: ‘Ultimately she left him because she was convinced that he would kill her if she remained.’

A third ‘described a report to the police in 2015 about Smith, her then boyfriend, had assaulted her’, Mr Storrie  said. He added: ‘He also confiscating her bank cards and caused her humiliation. 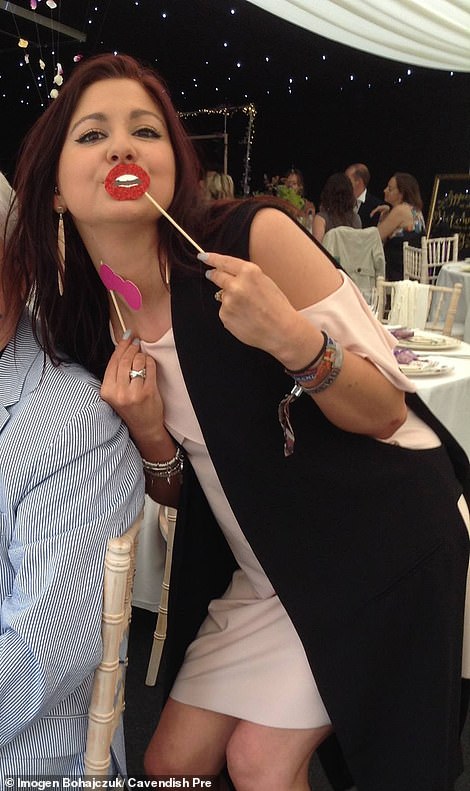 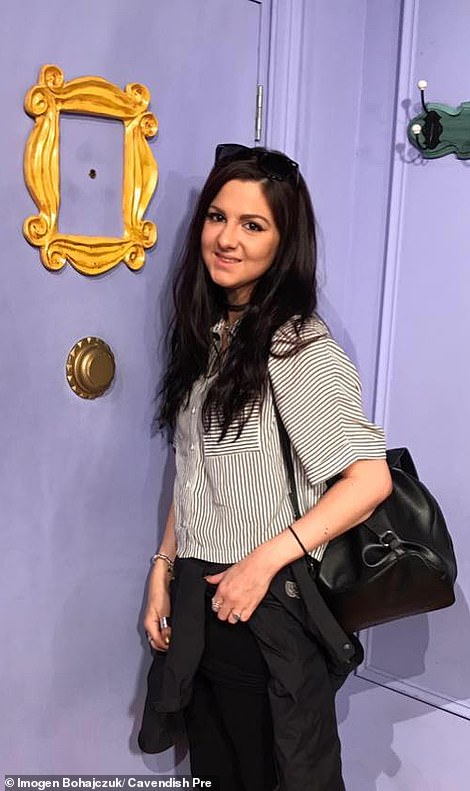 Miss Bohayczuk (above), who had a son by a previous relationship, had been in a violent and abusive relationship with Smith

‘She considered him to be a very dangerous man. This pattern of violent and manipulative behaviour was to be replicated in respect of his relationship with Imogen.’

In November 2020, a housing officer visited Miss Bohayczuk and noticed she was bruised and in need of hospital treatment. The victim said she had been stabbed in the thigh by Smith but only agreed to treatment if police were not informed.

The officer later shared the information with her colleagues and although police visited Miss Bohayczuk later that day it is thought no action was taken.

In the days leading up to the killing, Miss Bohayczuk then made contact with an ex-boyfriend, Gregory Johnson, and told him Smith was beating her up.

Mr Storrie added: ‘At 5pm on February 18, Imogen called the police on the 112 number on two occasions. In the second call she gave an account that Daniel Smith had left the property, that she would not let him back in because he had gripped her around her neck.

‘She then sent messages via the WhatsApp platform to Johnson. They included images of the injuries that she had sustained that day. 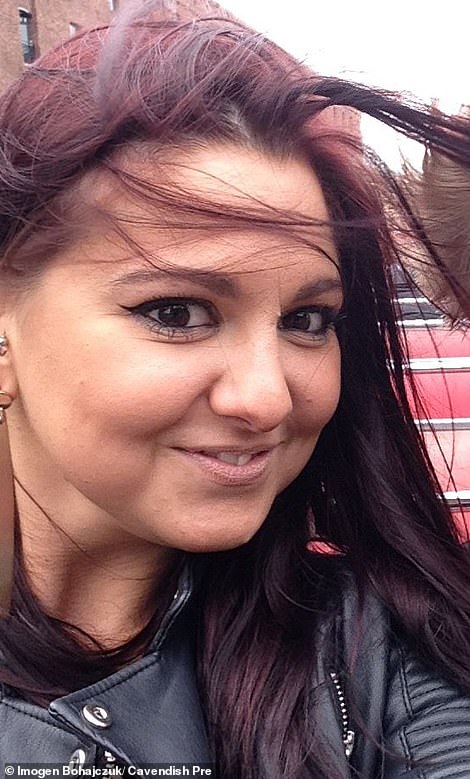 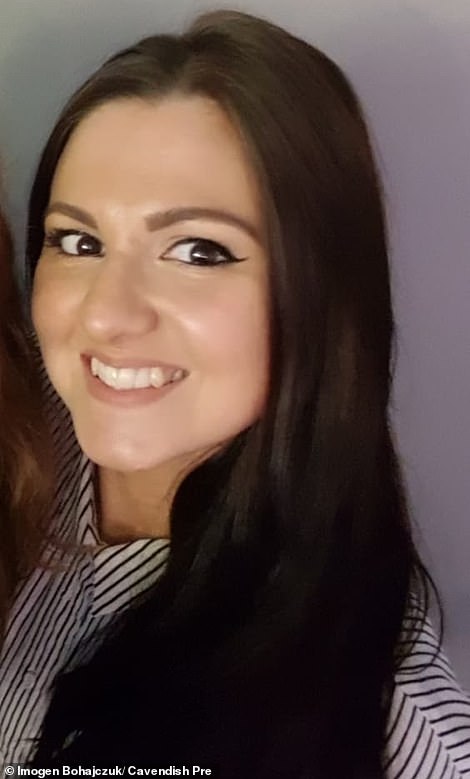 ‘Gregory Johnson replied telling her to go to police but there was no response to his message and the next phase of activity from her phone was indicative of it being used by Smith.

‘At 5pm the next day police officers attended in consequence of the phone calls from Imogen during the previous evening. But there was no response to their call as it appears obvious that by this point Imogen was already dead.

‘It was only when the housing officer made the welfare call on her address which set in train the investigation. When officers attended at the scene, they found a grim scene. Imogen had been laid on her bed, her body had been arranged as though she were a spectacle.

‘Her arms were crossed and she appeared to be clutching a bottle of perfume. A soft toy was by her neck and there had been rudimentary attempts to clean the scene.

‘Her legs were crossed at the ankle, and on examination, the discovery was made that her body had been daubed, in nail varnish, with the words ‘It was me’.

‘Chillingly an exhibition had been made of her body. It clear Smith had left and returned to the flat. It was a cruel humiliation of the victim to daub her body with the boast ‘It was me’.’ 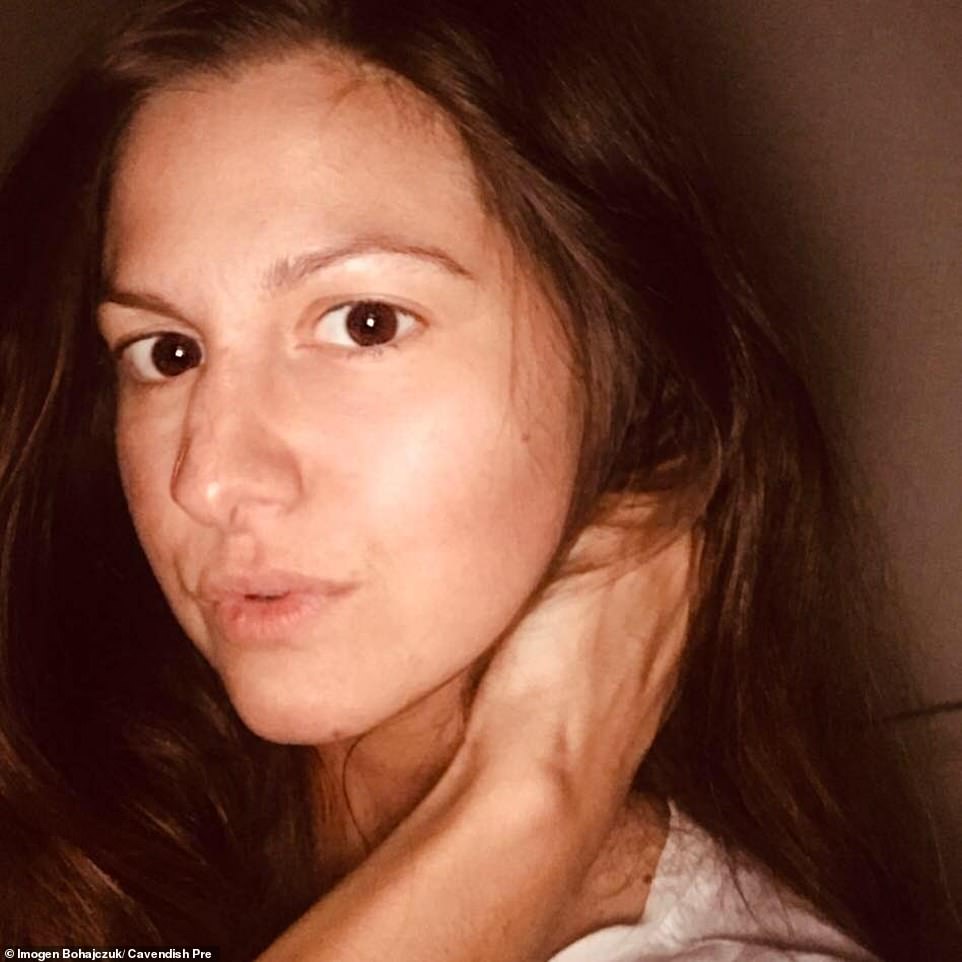 A post mortem showed Imogen had multiple bruises on her face, jaw, scalp and neck consistent with attempted strangulation plus a series of stab wounds to her neck and body, one separating a rib bone and others penetrating her lung and heart.

After the killing Smith activated Miss Bohayczuk’s phone with a new SIM card and used her bank card 38 times to buy alcohol from local shops and the account was found to be overdrawn by £400.

He was arrested 24 hours after the body was discovered and admitted killing Miss Bohayczuk, saying he was drunk at the time and could remember why he attacked her.

Benjamin Knight, defending, said his client does not remember the stabbing itself but did recall placing her favourite perfume and soft toy on the bed.

He said: ‘That was not to create a spectacle but placing her in some form of peaceful position, in his mind. He does not really recall what he was thinking, only that it seemed to be the right thing to do – although he accepts, objectively, that does not make any sense.’ 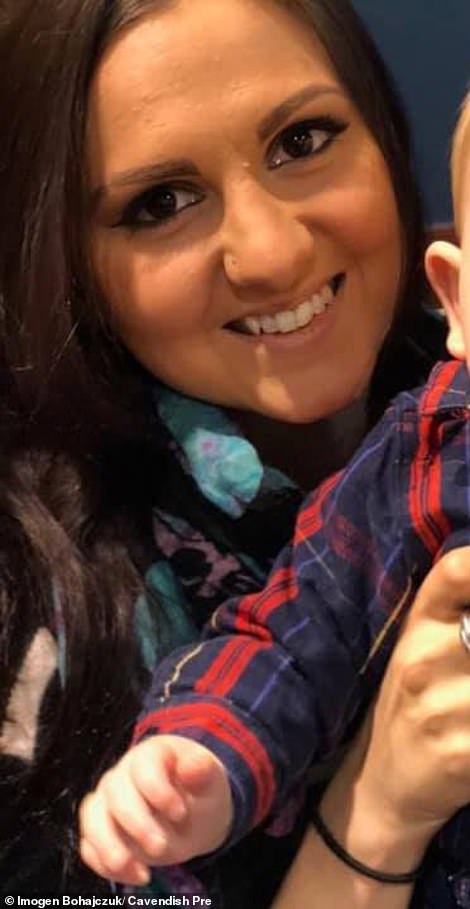 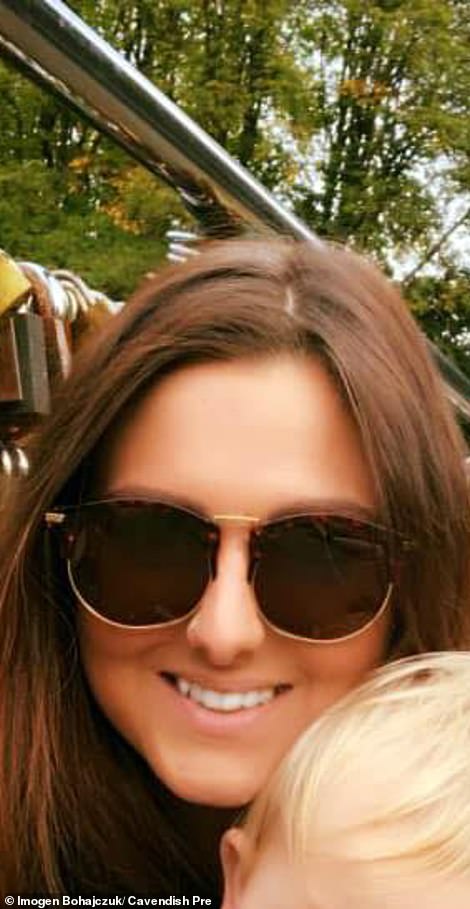 In a statement, Miss Bohayczuk’s mother Kim said: ‘All her hopes and dreams were so brutally, cruelly and violently take from her. She had been full of hope for the future and her son will never know the healing power of her hugs and kisses.

‘As he grows up, she will not be there to share his successes and comfort his disappointments. It just adds to our heartbreak and despair.’

Smith who has previous convictions for assault, kidnapping and false imprisonment was ordered to serve a minimum of 17 and a half years.

Judge Patrick Field QC told him: ‘It seems likely that you killed Imogen on or after February 18. That was the date when she called the police and she sent messages to a former partner complaining of being assaulted by you. There is no evidence of her surviving beyond that date.

‘When her body was found on March 4 it soon became apparent that she met her death following a brutal and ferocious attack. She had received a terrible beating with bruises to her face and head and also to her upper limbs caused, no doubt, as she tried to fend off your attack. 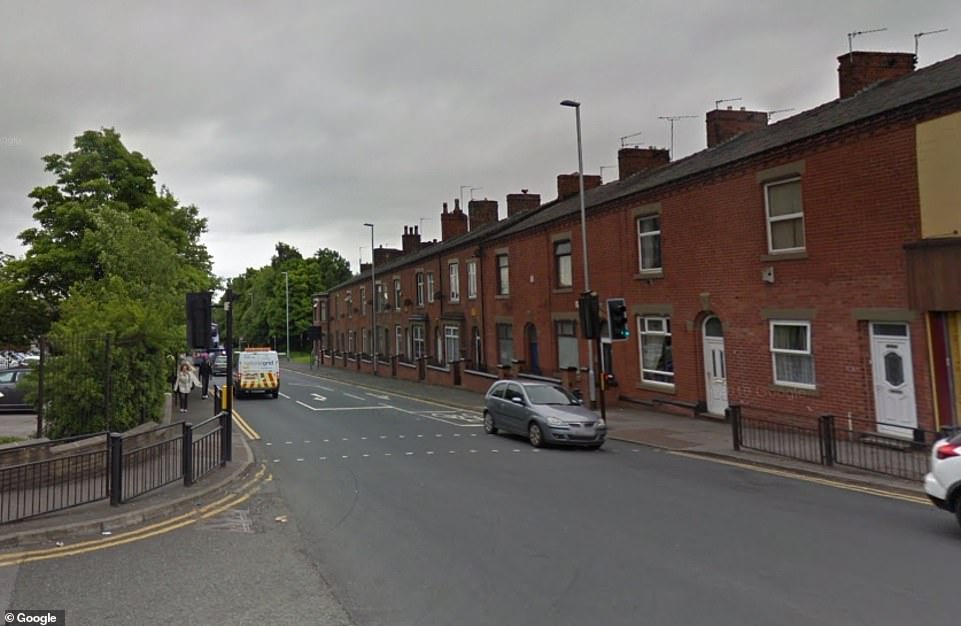 ‘There was also evidence of strangulation. The fatal injuries were multiple stab wounds at least two of which were delivered with severe force.

‘On her right leg you had daubed the words, ‘It was me’ in red nail varnish. This macabre graffiti is said to be some kind of confession by you; a sign to the police that you were responsible for the killing but I reject that notion utterly.

‘If you had wanted to make clear to the police what you had done, you could have gone to them and told them. This act looks like an act of callous and cruel triumphalism.

‘There was cruelty here because you desecrated the body of the woman you had just killed in order to proclaim what you had just done. This act is inconsistent with any immediate remorse on your part.

‘It is said that you laid Imogen out on her bed because that is what you thought was right. That is a grotesque irony. There was nothing that you did on that day that can be described as right.

‘Imogen was a young woman when she died. She was the mother of a young child. In killing Imogen you have deprived that child of a mother and Imogen’s parents and siblings have been deprived of a daughter and a sister. Their grief is palpable.’