A defiant truck driver from Sydney’s western suburbs has been fined for beeping his horn while stuck in gridlocked traffic during anti-lockdown protests.

The driver, who was parked in the middle of George street as thousands of people marched the CBD, was filmed riling up the crowd at 2pm on Saturday.

‘We’re with them absolutely. We’re from western Sydney,’ the truck driver and his female passenger told Daily Mail Australia.

‘We’re being shut down with the lockdown, we work for a racecourse. We support them.’

The driver was reprimanded by police who fined him for beeping his horn and took a photo of the licence plate. 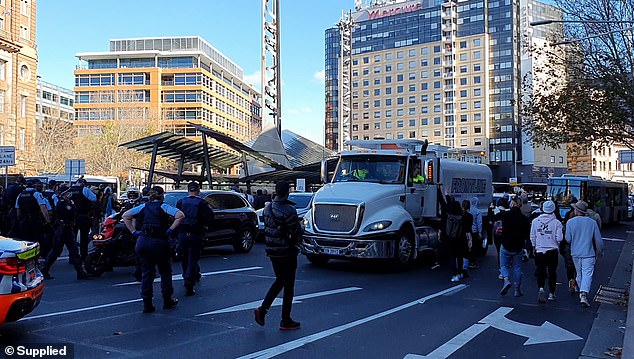 They broke through a police barrier to continue down George St but were stopped at King St.

There is a heavy police presence in Sydney, including mounted police and riot officers.

NSW Police described it as a ‘high-visibility policing operation’ in response to ‘unauthorised protest activity’.

Protesters threw plastic bottles and plants taken from the street at officers. Police confirmed ‘a number’ of arrests had been made.

Signs carried by the protesters call for ‘freedom’ and ‘the truth’.

NSW Police said it recognised and supported the rights of free speech and peaceful assembly, but the protest was a breach of public health orders.

‘The priority for NSW Police is always the safety of the wider community,’ a police statement said.

St James and Museum stations have been closed. Police are dispersing people through George St, encouraging them to get trains at Town Hall, Wynyard or Circular Quay. 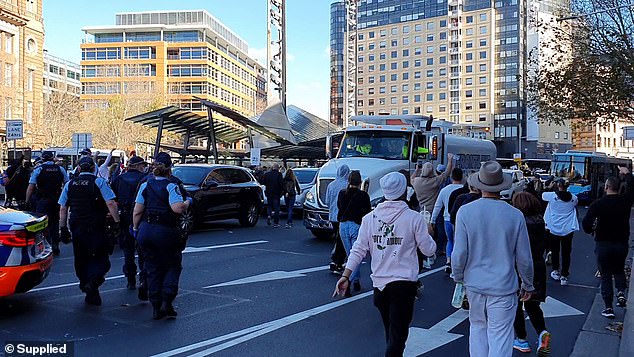 ‘We’re with them absolutely. We’re from western Sydney,’ the truck driver and his female passenger told Daily Mail Australia