Bill de Blasio on Friday urged all private employers to make vaccinations against COVID-19 compulsory, calling on them to do the ‘maximum you feel you can do’ as the nation is roiled by early signs of a resurgent pandemic.

The mayor of New York City told WNYC radio that he wanted the private sector to do more.

‘I urge every employer to go to any form of mandate that you’re comfortable with.’ 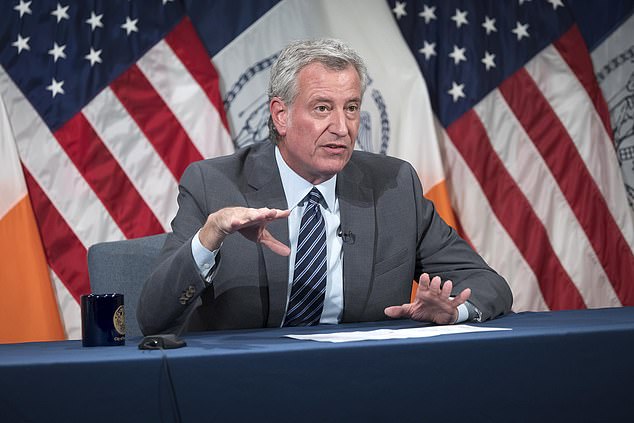 Bill de Blasio, mayor of New York, on Friday urged private companies to force their workers to get vaccinated 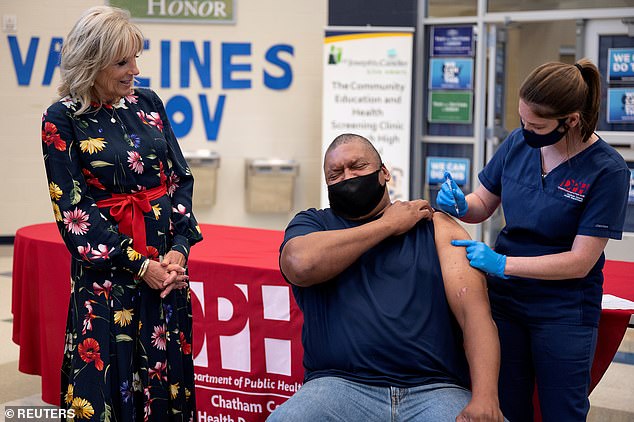 Jill Biden looks on as Alfred Lee Smith is vaccinated in Savannah, Georgia, on July 8 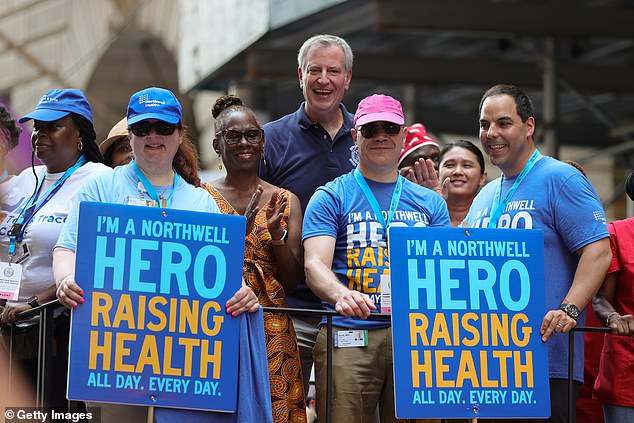 Bill de Blasio (center) and his wife Chirlane McCray (center-left) join hundreds of police, fire, hospital, and other first responders in a ticker-tape parade in New York on July 7 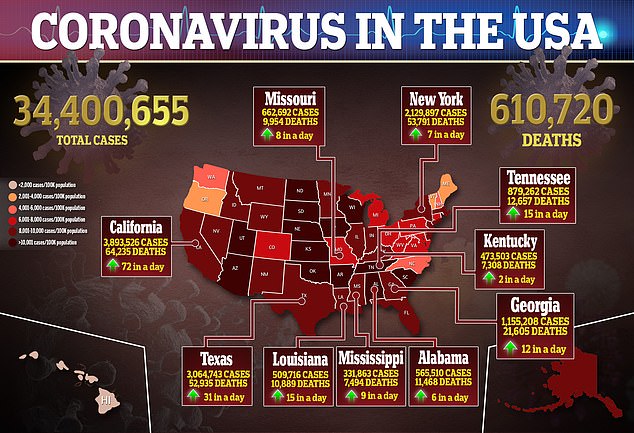 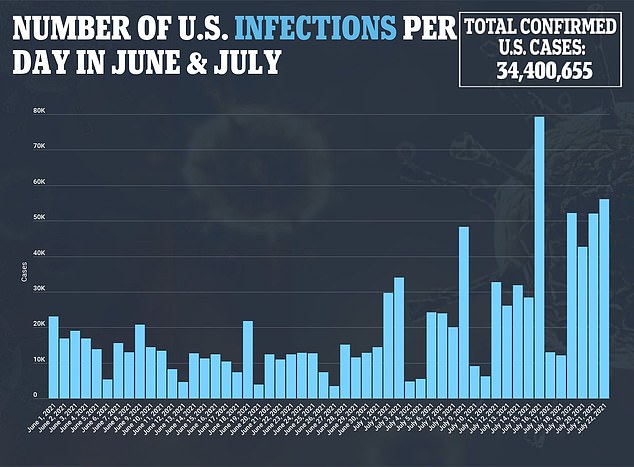 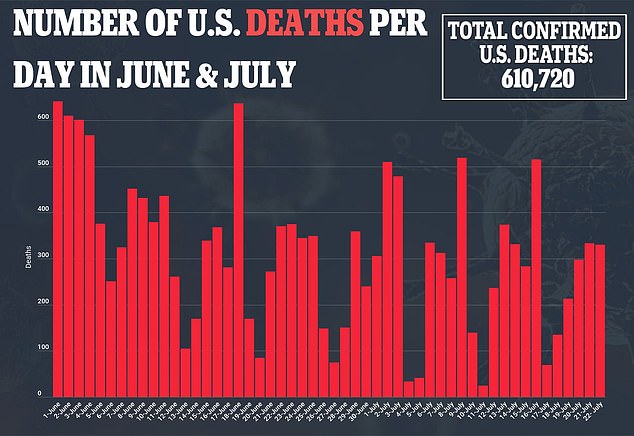 On Wednesday he announced that workers in public hospitals and clinics would, from August, be compelled to get vaccinated or submit to weekly testing for the virus.

It will apply to some 30,000 workers across 11 public hospitals.

It comes as New York sees a surge in new coronavirus infections amid the spread of the more contagious Delta variant.

‘I don’t have a doubt in my mind this is going to move people [hospital workers] towards vaccination,’ de Blasio said on Wednesday.

‘If we don’t see vaccination numbers go up fast enough, if we don’t see progress against the variant, we are going to consider a range of options,’ he said, adding that he hoped private hospitals would take similar steps.

Just over 60 per cent of hospital staff in the Bronx, Brooklyn and Staten Island have received a vaccine through July, according to the New York Post.

That compares to 64 per cent of adults in New York City adults who are fully vaccinated, and 70 per cent who have received at least one dose.

‘Private enterprise rights are different than for a public entity,’ de Blasio said on Friday.

‘We all need to climb this ladder together. We’ll have more to say in coming days.’

The mayor said that they had reached the limits of simply encouraging people to get vaccinated.

‘We tried purely voluntary for over half a year. We tried every form of incentives,’ he said during his weekly appearance on The Brian Lehrer Show.

‘But now we’ve got to go further, we’ve reached the limits of a purely voluntary system.

COVID vaccinations prevented 8,300 deaths and 44,000 hospitalizations in New York City during the first six months of 2021, according to a recent Yale University study conducted with the city’s Health Department.

In addition, New Jersey says vaccines have been more than 99-percent effective against the virus throughout the area, according to an analysis released Monday.

Of the the 4.4 million people vaccinated in New Jersey as of June 28, the Health Department’s analysis showed only 3,474 tested positive for COVID.

Of those individuals, 84 required hospitalization and 31 died.

As the spread of the now prominent Delta variant surges and vaccinations continue to slow, many believe indoor mask mandates should return.

‘The Delta variant is like a freight train coming on, we’ve got to take it real seriously,’ he said on Friday.

However, De Blasio said he’s not imposing a mask mandate anytime soon because of concerns it would prevent New Yorkers from getting vaccinated.

‘I fear this. I don’t want to see people say, ‘Oh, we’re wearing masks so we don’t need to deal with vaccination,” de Blasio said Tuesday at his daily press briefing.

‘We have the solution to the thing that is killing so many people and is now threatening once again our ability for people to make a living. Why is this hard? Just go get vaccinated,’ he urged.

He praised San Francisco’s decision to force municipal workers to get vaccinated, and the French government’s vaccine passport scheme.

On Sunday, Los Angeles County reinstated its indoor mask mandate as the Delta variant threatens to halt progress against the coronavirus across the country.

The spread of the highly contagious strain, which originated in India, has already pushed new infections up to 26,306 nationwide, an increase of 69.3 percent on a seven-day moving average compared to one week earlier.

Nearly every state witnessed a rise in infections in the last week and CDC data shows the Delta variant is responsible for about 60 percent of these cases.

The reinstatement of indoor mask wearing in LA came after the county saw a 700% increase in its positivity rate over the past month, according to health officials, with the unvaccinated accounting for all hospitalizations.

The mandate is a departure from CDC guidelines that now say the vaccinated can remain without a mask indoors.

HOW LIKELY ARE YOU TO GET COVID-19 AFTER BEING FULLY VACCINATED?

So-called ‘breakthrough’ COVID-19 cases occur when people contract the disease 14 days or more after receiving their second dose of the Pfizer-BioNTech or Moderna vaccine or the Johnson & Johnson one-shot jab.

Clinical trials have shown that Pfizer-BioNTech’s vaccine is 95% effective in preventing symptomatic disease and the Moderna vaccine is 94.5% effective.

Meanwhile, real-world data showed the Pfizer jab is 91% effective against all disease for at least six months and the Moderna vaccine is 90% effective.

In addition, Johnson & Johnson’s vaccine trials showed 72% efficacy in the U.S., meaning those who got the one-shot jab are 72% less likely to contract the disease.

When comparing fully vaccinated people who did and did not get sick, the risk is even lower.

The most recent Centers for Disease Control and Prevention (CDC) data show that 10,262 of at least 133 million Americans who have been fully vaccinated against COVID-19 later contracted the disease.

This translates to 0.00716% of people who have completed their vaccine series have gone on to test positive.

It also represents the true odds of getting COVID-19 after full vaccination: less than 0.01%.

What’s more, fully vaccinated people who test positive have mild illnesses, and are very unlikely to be hospitalized or die.

The CDC states that 99.5% of all deaths occur in unvaccinated people.

That means, if the figure applies to the 3,165 Americans who’ve died in July 2021 so far – as of July 13 – about 3,150 deaths would be among unvaccinated people and 15 deaths among fully vaccinated people.