New South Wales has recorded its highest daily spike in Covid-19 cases with 136 new infections and the outbreak now considered to be a ‘national emergency’.

Premier Gladys Berejiklian announced work travel restrictions would not only be extended to parts of western Sydney but that it was unlikely lockdown would be lifted by July 30.

‘There is no doubt that the numbers are not going in the direction we were hoping they would at this stage,’ she said.

‘It is fairly apparent that we will not be close to [ending lockdown] next Friday.’

The NSW Government held a crisis cabinet meeting on Friday morning where it was declared the current outbreak in south-west and western Sydney was a ‘national emergency.’

Of the new cases reported, 53 were infectious in the community. An 89-year-old man has also died from the virus overnight.

The new cases surpass the record 124 infections that were announced on Thursday.

Travel restrictions have been extended to the Cumberland and Blacktown local government areas with workers now prohibited from leaving their suburb unless their job is essential.

Suburbs impacted by the tougher restrictions include Merrylands, Greystanes and Guildford. 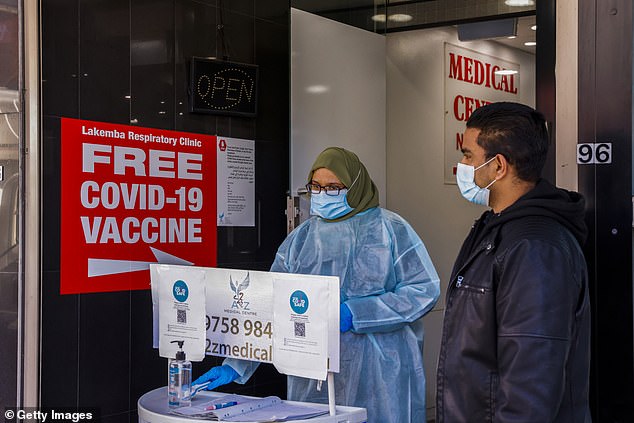 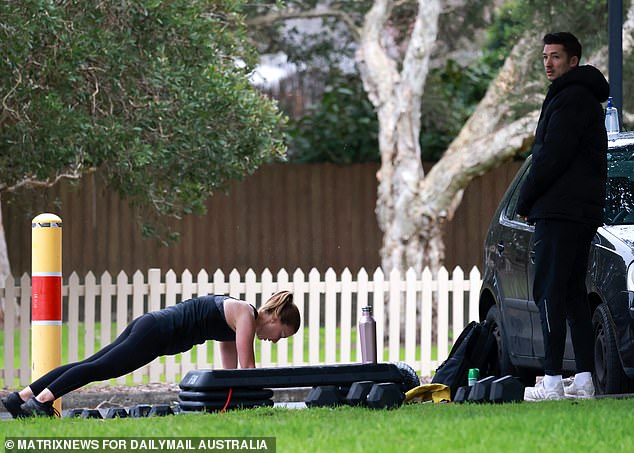 Premier Gladys Berejiklian announced work travel restrictions would not only be extended to parts of western Sydney but that it was unlikely lockdown would be lifted by July 30 (pictured, Sydney resident exercises at Centennial Park as the city remains plunged in lockdown) 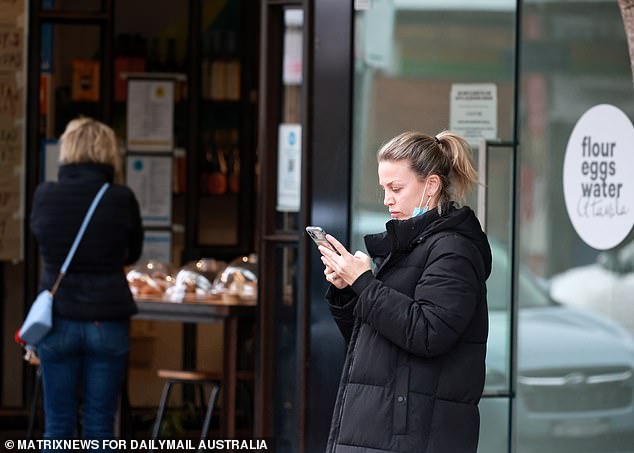 ‘We also have to acknowledge that we need to contain the spread of the virus, and that is critical at this time,’ Ms Berejiklian said.

Chief health officer Dr Kerry Chant added: ‘I have advised the government today that this is a national emergency, and requires additional measures to reduce the case number.’

‘What we are seeing, is that the actions we have taken to date have averted many cases, but what we are not seeing is the turnaround that we would have liked to see at this stage.’

The staggering number of cases prompted Dr Chant to call for vaccination efforts to be ramped up across the community.

‘I have requested that what we urgently focus on is redirecting all of the vaccine initiatives to south-western Sydney, and western Sydney, particularly the affected local government areas.’

Dr Kerry Chant has led by example revealing her husband and mother-in-law have both received their AstraZeneca vaccines.

‘I just want to say that the Chief Health Officer would not recommend AstraZeneca to someone that they care about if they had concerns that the risks of AstraZeneca are infinitesimally small compared to the benefits,’ she said.

‘So can I just be very clear that we need to correct the mythology about AstraZeneca.

‘And in the context of the Delta threat, I just cannot understand why people would not be taking the opportunity to go out and get AstraZeneca in droves.’

The NSW Government is reportedly in talks about tightening further restrictions in Fairfield, Liverpool and Canterbury-Bankstown local government areas – where the majority of infections have been recorded. 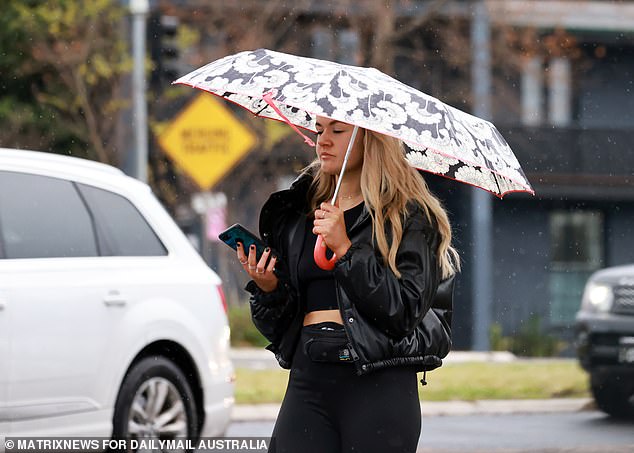 Of the new cases reported, 53 were infectious in the community. An 89-year-old man has also died from the virus overnight 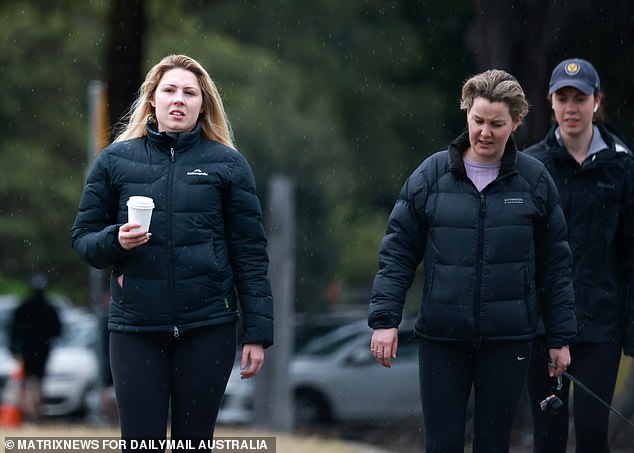 Workers will not be able to leave their area unless their job is considered essential.

Below is a list of suburbs that have been impacted by the tough, new restrictions.

‘We need people in south-west Sydney to stop moving around,’ NSW Health Minister Brad Hazzard said on The Kyle and Jackie O Show.

‘We need people to understand it’s a dangerous virus.’

Sources say more police patrols or the further tightening of travel rules could be on the table.

Premier Gladys Berejiklian said on Thursday that the number of new infections over the weekend will determine how restrictions in the city and surrounding regions will change after July 30, when they’re currently set to end.

Discussions about how restrictions may be changed to further lock down the south-west and ease pressure on areas with few cases will begin next week, The Australian reported.

Areas flagged for eased restrictions in the overhaul include the Northern Beaches, Shellharbour and the Central Coast, which have both seen too few case numbers to warrant stay-home orders.

Shellharbour especially has not had a single case since June, but residents still face the same stay-home orders as those living in the heart of Sydney.

‘It is totally unreasonable to keep the people of the Shellharbour LGA in lockdown. If circumstances change, restrictions could be reconsidered,’ Mr Ward wrote. 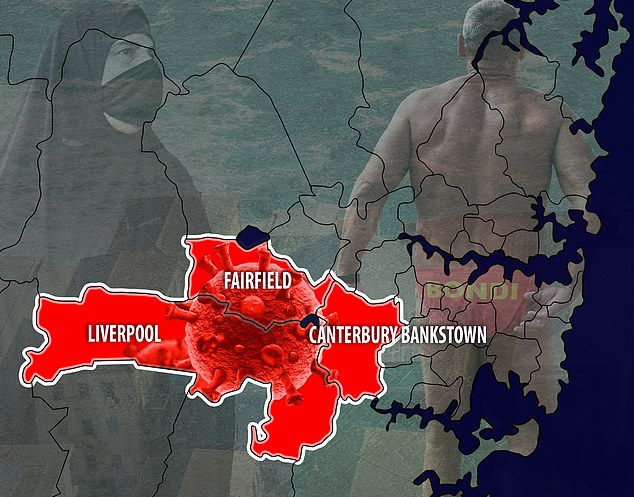 The NSW Government is also reportedly in talks about tightening restrictions in Fairfield, Liverpool and Canterbury-Bankstown local government areas – where the majority of infections have been recorded 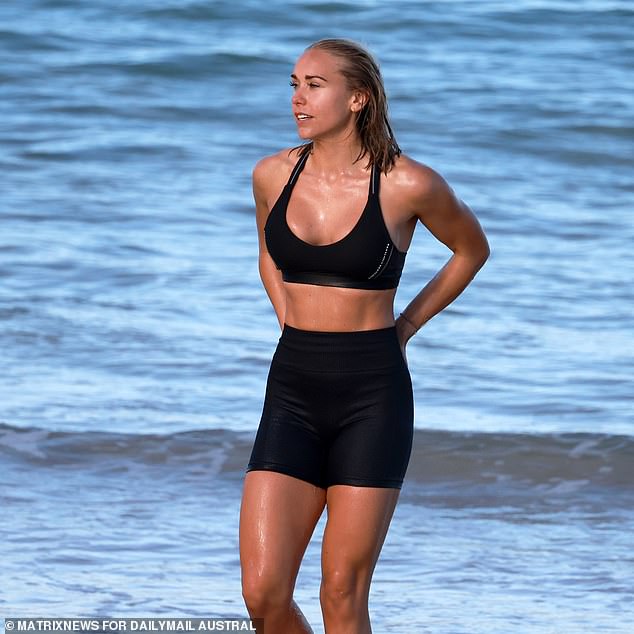 Parts of Sydney could be lifted out of lockdown sooner as the majority of cases are recorded in the south-west suburbs (pictured, swimmer at Bondi) 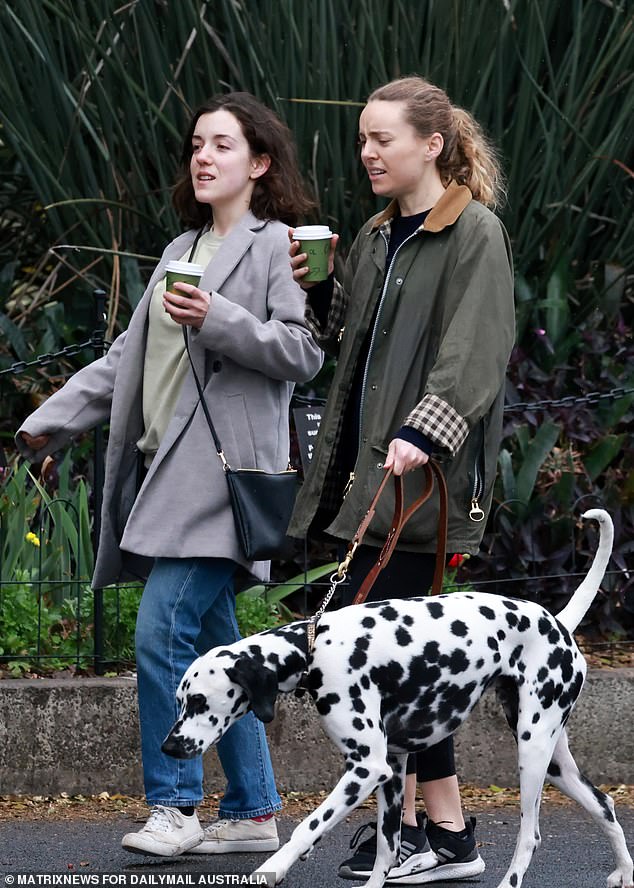 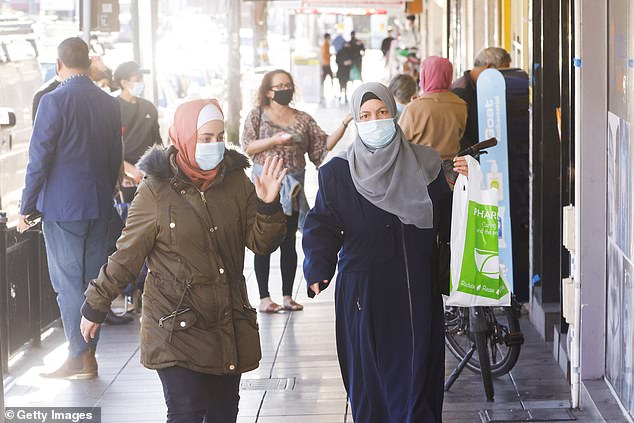 Sources say more police patrols or the further tightening of travel rules could be on the table (pictured, two women walking down Haldon Street in Lakemba, in Sydney’s south-west)

CASE NUMBERS IN THE SOUTH-WEST:

Almost half the new figures from Thursday were recorded in south-west Sydney, specifically:

But health officials are said to be deeply concerned that the daily infection rates aren’t going down in the south-west of the city, and that the number of infected people out in the community is steadily on the rise.

As it stands, five million residents of Greater Sydney are not allowed to leave their homes except to shop for groceries, go to work, meet up with one other person outside, see the GP or care for someone.

Residents have already endured almost four weeks of what was supposed to be a one week lockdown, but the city has continued to record high case numbers every day.

Despite rules dictating outdoor exercise can be done with one other person, far larger crowds have been seen hanging out in Sydney’s east – where the outbreak first began on June 16 with an infected airport driver from Bondi.

While those in the city’s eastern suburbs were seen out enjoying the beach on a sun-drenched Thursday, the situation in the south-west is dire.

Residents of Fairfield, Canterbury-Bankstown and Liverpool are already banned from leaving their LGAs entirely unless they are authorised workers. 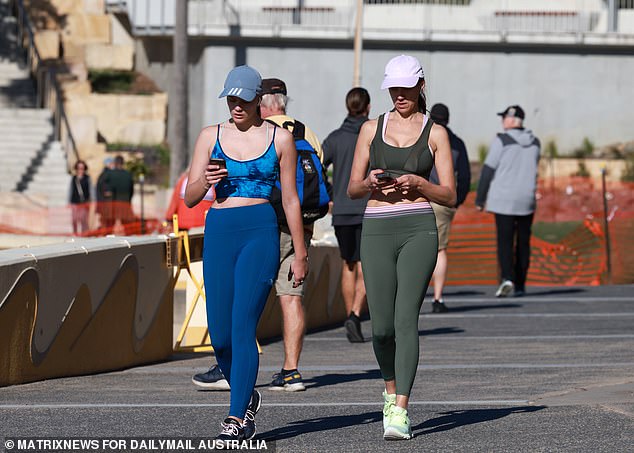 Areas pegged for eased restrictions in the overhaul include the Northern Beaches, Shellharbour and the Central Coast, which have both seen too few case numbers to warrant stay-home orders (pictured, women in Bondi on the Eastern Beaches enjoy a sunny Thursday walk) 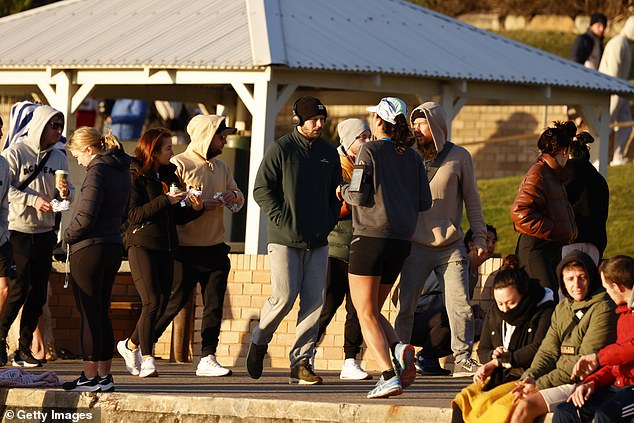 FIND THE LATEST EXPOSURE SITES NEAR YOU

Even then, they have to present a negative Covid test every three days, which has seen hour-long queues at testing centres.

The south-west has already been subject to tougher restrictions than the rest of the city due to a disproportionate number of cases recorded in those areas.

But it could face an even tighter lockdown after this weekend with allegations some people have been untruthful about their movements when speaking with contact tracers – stymieing the effort to release accurate exposure sites, resulting in high case numbers.

Others have allegedly been working for cash or hiding information from authorities, sources claimed. 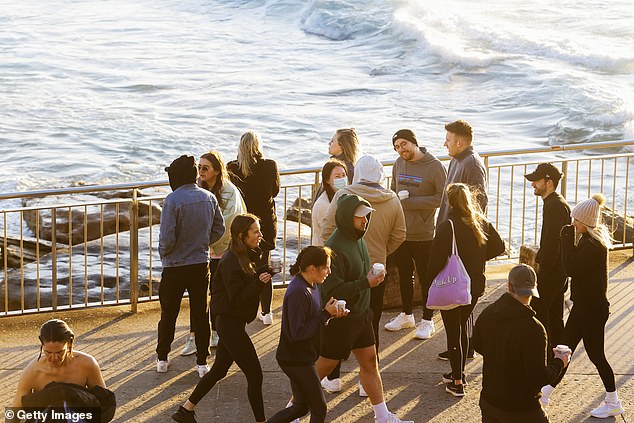 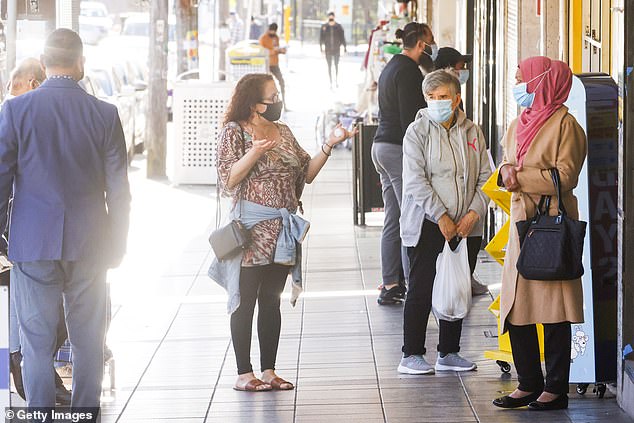 Areas singled out for a testing drive were Toongabbie, Mount Druitt, Rooty Hill, Fairfield, Liverpool and Bankstown as well as in high-risk areas across the city’s south, including Narwee and the Georges River and Bayside LGAs.

Fairfield continues to record the highest number of cases of any local government area – with health officials finding 30 Covid-19 infections in the region in the last day alone.

Dr McAnulty said of the new cases, 23 were found in the Cumberland LGA, 21 in Canterbury-Bankstown, 12 in Blacktown and 11 in Liverpool.

Meanwhile, people at Bronte Beach in the city’s east swarmed to the beach to soak up the sun, in stark contrast to the sparse and masked-up shoppers in the south-west epicentre.

Rugged up in coats and hoodies, beach dwellers could be seen standing together and chatting while holding takeaway coffees. 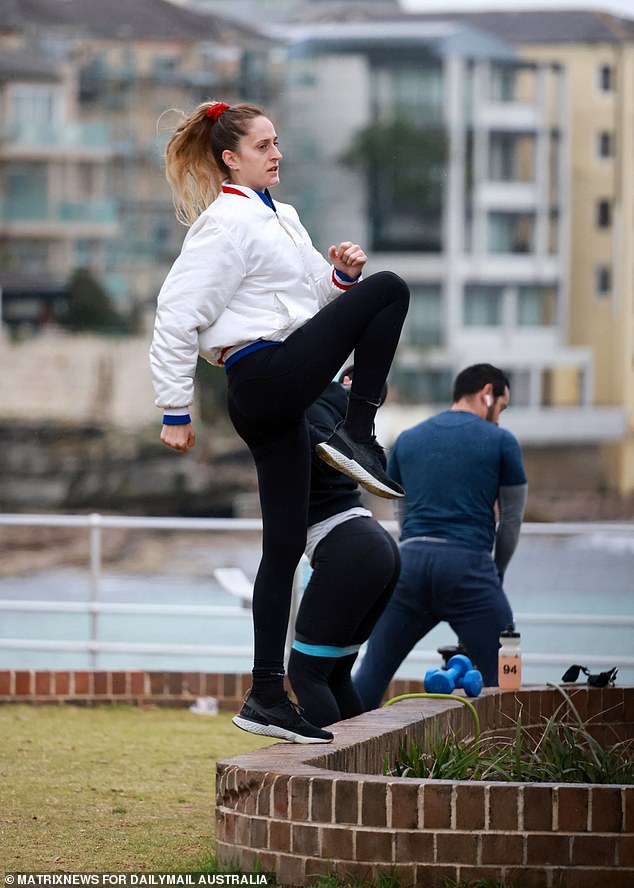 Meanwhile, people at Bronte Beach in the city’s east swarmed to the beach to soak up the sun, in stark contrast to the sparse and masked-up shoppers in the south-west epicentre (pictured, resident exercising at Bondi)

In her daily press conference, Ms Berejiklian warned residents to ‘assume anybody you’re in contact with has the virus’.

The 124 cases were detected from 85,185 tests to 8pm on Wednesday night, the most conducted in a single 24-hour period in the state during the entire pandemic.

The spike in cases is the highest during Sydney’s latest outbreak; the last time there were this many infections found in NSW in one day was during the first wave in April 2020.