Press Secretary Jen Psaki was forced to confess the Biden administration made an ‘error’ when it promoted a group that pushes teachers to ‘disrupt Whiteness and oppression’ in a federal Department of Education handbook.

Top Republicans have been accusing Biden of ‘another major flip flop’ in the wake of outrage over the DOE linking a citation to the Abolitionist Teaching Network’s handbook in a lengthy federal document.

In a White House press briefing Thursday, Psaki echoed an earlier White House statement admitting to the error and appeared to distance Biden from the group even further. 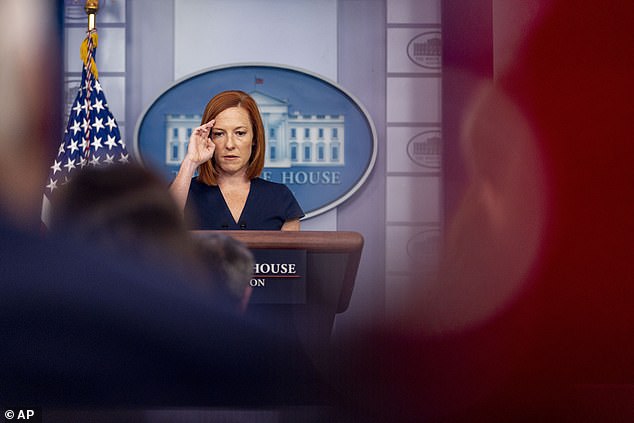 Press Secretary Jen Psaki distanced the White House from the Abolitionist Teaching Network’s controversial ideals on Thursday, but minimized the group’s impact on the overall document as a ‘citation in a report of which there are a thousand citations’

‘The specific site does not endorse – does not represent – the administration’s view, and we don’t endorse the recommendations of this group,’ Psaki said, adding that the controversial mention has ‘been removed or in the process of being removed.’

However, she minimized the radical group’s impact on the document, categorizing it as a ‘citation in a report of which there are a thousand citations.’

‘If Biden truly does not support Critical Race Theory, he will publicly call on teachers’ unions to stop pushing this propaganda on our unsuspecting children,’ Tennessee Senator Marsha Blackburn told Fox News Wednesday.

‘This is another major flip flop from the Biden administration.’ 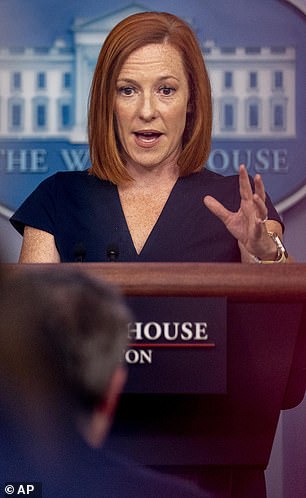 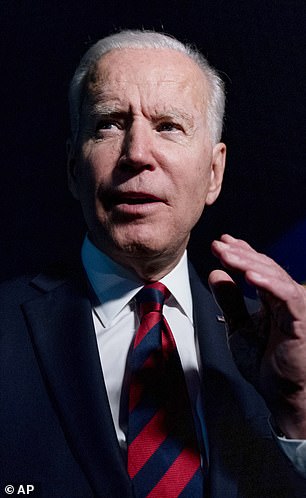 The White House distanced itself from the Abolitionist Teaching Network after blowback from Republicans over a federal document linking to the group’s handbook. Press Secretary Jen Psaki (left) admitted citing the group was an ‘error’ 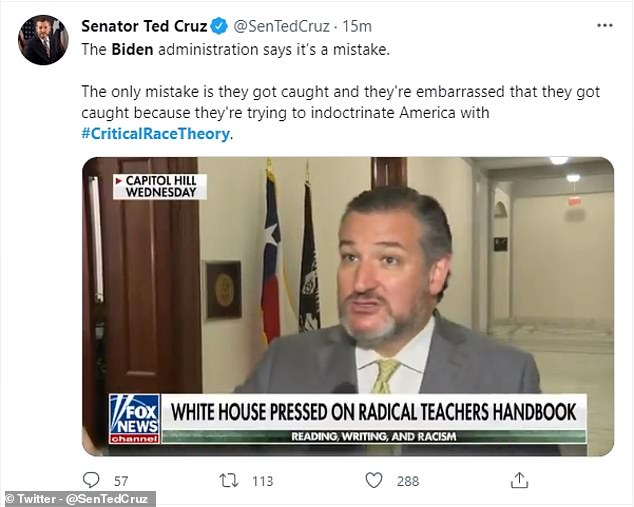 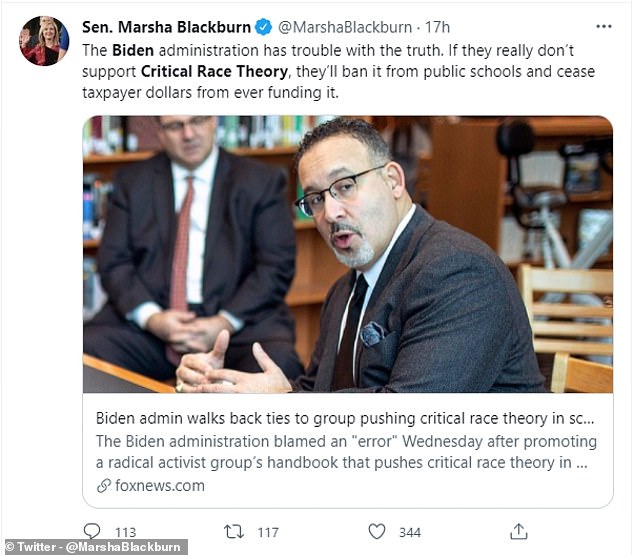 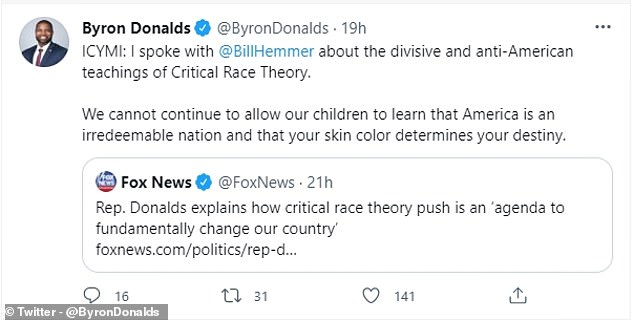 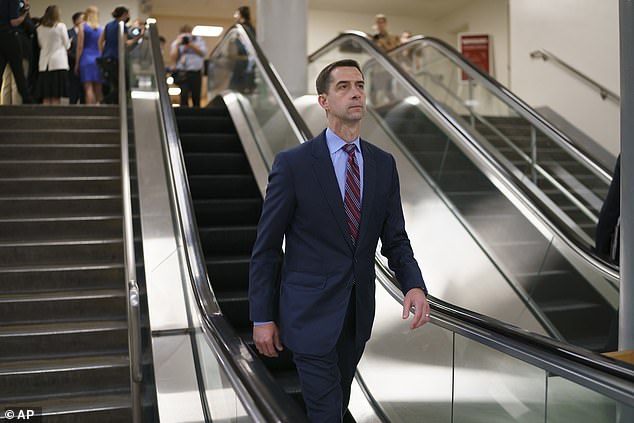 ‘No one believes this is an honest mistake,’ Arkansas Senator Tom Cotton told Fox News. ‘If the Biden administration doesn’t support this sort of radical racist ideology, it should publicly condemn Critical Race Theory and stop it from being promoted in the federal government.’

Florida Republican Rep. Byron Donalds called Critical Race Theory ‘divisive and anti-American’ amid the fallout, and declared ‘We cannot continue to allow our children to learn that America is an irredeemable nation and that your skin color determines your destiny.’

Psaki said the federal government does not ‘dictate or recommend specific curriculum decisions’ in schools, a decision she maintained was up to state and local governments.

‘We believe the American people trust teachers to make those decisions, not the government,’ the press secretary said.

As the administration attempts to distance itself, a new report uncovered connections that Biden’s deputy education secretary and a senior adviser to Education Secretary Miguel Cardona have to Abolitionist Teaching Network’s co-founder Bettina Love. 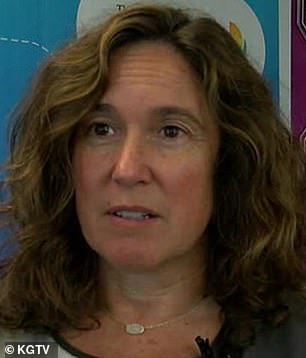 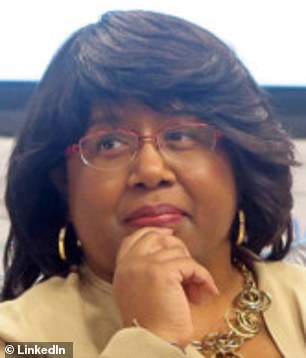 Deputy Education chief Cindy Marten was allegedly in charge of the San Diego school system when the district paid Love more than $10,000 for a speaking event, documents obtained by Fox News purport to show.

Marten was nominated to her post in February but was only confirmed in May, a month after the DOE’s handbook was published.

Senior Advisor for Policy and Planning Donna Harris-Aikens served as a senior director at teachers union National Education Association when it hosted Love as a speaker in June 2020. 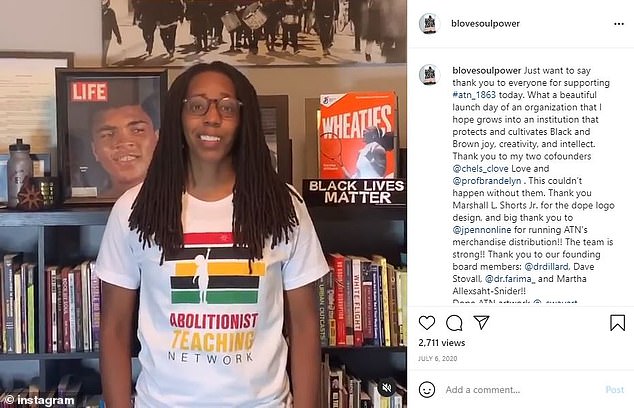 Abolitionist Teaching Network co-founder Bettina Love previously said the organization is ‘dedicated to not creating new schools or reimagining schools, but destroying schools that do nothing but harm Black and brown children’ 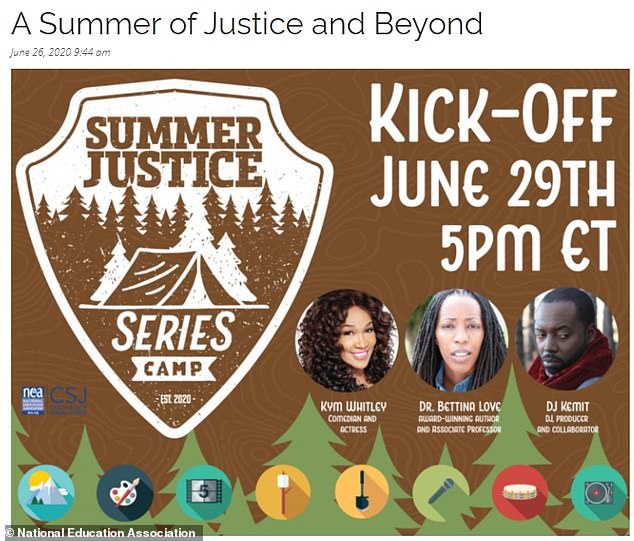 Love is clearly featured on the union’s event advertisements, and Harris-Aikens’ LinkedIn confirms her leadership role at the time. 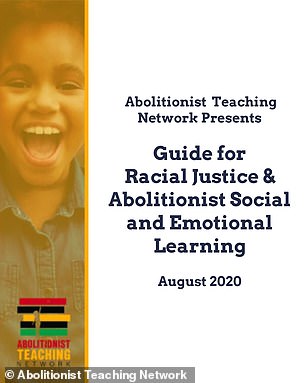 The Biden administration promoted a handbook urging teachers to ‘disrupt Whiteness and other forms of oppression’ in their Department of Education guidance on reopening schools, it has been revealed

The lengthy federal document released earlier this week linked to the Abolitionist Teaching Network’s ‘Guide for Racial Justice & Abolitionist Social and Emotional Learning’ in a section describing how schools are a ‘microcosm of society’ and conversations essential to ‘race and emotional learning’ should be ‘anchor tenets’ in schools.

The Department of Education handbook on how to welcome children back to classrooms following COVID states that schools have a share of $122 billion in funding from President Joe Biden’s American Rescue Plan.

Its introduction includes ways to help students ‘for whom the pandemic exacerbated pre-existing inequities’.

Abolitionist Teaching Network says that schools should ‘[b]uild a school culture that engages in healing and advocacy. This requires a commitment to learning from students, families, and educators who disrupt Whiteness and other forms of oppression.’

Their website also has various resources that link to ideas often associated with critical race theory – however they don’t mention it by name. 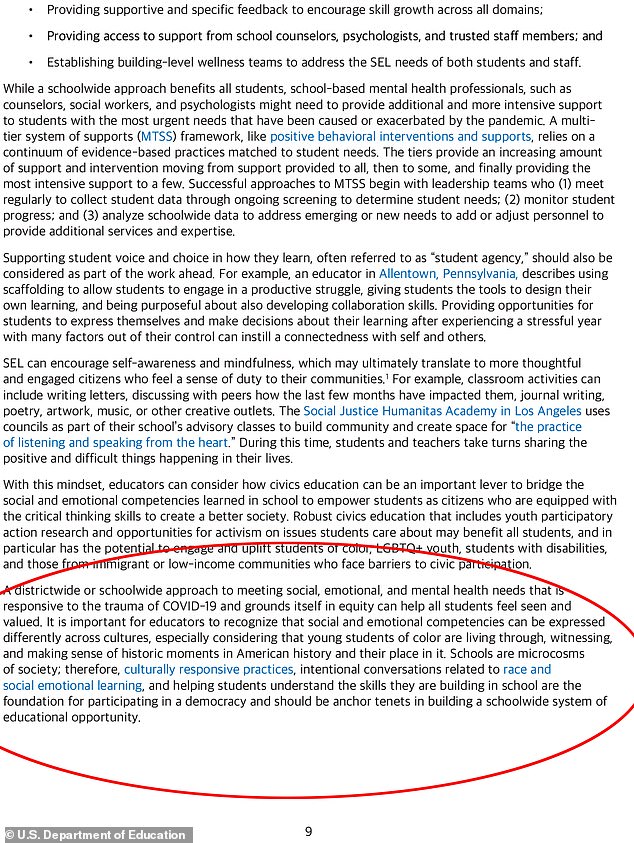 ‘Abolitionist Teaching Network’s mission is to develop and support those in the struggle for educational freedom utilizing the intellectual work and direct action of Abolitionists in many forms,’ the website states.

According to Fox co-founder Love said during a webinar earlier this year she would ‘create a national database of antiracist school counselors, therapists and teachers.

She also said the organization is ‘dedicated to not creating new schools or reimagining schools, but destroying schools that do nothing but harm Black and brown children’.

If you don’t recognize that White supremacy is in everything we do, then we got a problem,’ Love said. ‘I want us to be feared.’

In September 2020, according to reports, she also conducted diversity training for managers and principals during which she said schools ‘didn’t see Black people as humans and were anti-Black.