Fewer than half of over-80s living in some inner-city areas of England are fully vaccinated against Covid, MailOnline can reveal.

And just three of the country’s 7,000 neighbourhoods are currently coronavirus-free, according to our analysis of a wide range of Government statistics.

The figures — crunched into a handy interactive tool that you can use to find out how your town is currently faring against the virus — are proof England could still be on the cusp of a devastating third wave, top scientists say.

To use the tool you’ll need to know which MSOA you live in, which you can find by using the government’s map to zoom in on your area.

Coronavirus-tracking experts warned pockets of the country are still vulnerable to the virus because of their low vaccination rates.

And with infection rates continuing to spiral amid fears they’ll hit record levels within weeks, some academics say NHS hospitals in parts of the country may have yet to suffer their darkest days.

NHS England’s most up-to-date regional breakdown of vaccination figures — which only go up until July 11 — lay bare just how much uptake rates vary across the country.

Just 46.8 per cent of elderly residents in Pier Head, a neighbourhood in the west of Liverpool city, have received both jabs. Rates are also below 50 per cent in nearby Central and Islington.

And in the worst performing area, Tidenham and Woolaston, in west Gloucestershire, a mere one in 10 over-80s are fully vaccinated.

But experts say the rates may not be accurate because it is on the Welsh border and patients may have opted to get jabbed in Wales, meaning they aren’t registered in NHS England figures.

However, more than 90 per cent of over-80s in 5,111 of England’s 6,791 middle-super output areas, which is what the districts are technically known as, have been double-jabbed already.

Department of Health data shows swathes of the country recorded two or fewer cases a week during the quietest parts of the second wave.

But the most up-to-date infection rate statistics — which go up to the week ending July 15 — show how the picture has drastically changed in the face of the third wave.

Almost one in 50 people tested positive in the worst-hit parts of the North East and North West last week, official data revealed.

Whitehaven Harbour and Corkickle in Cornwall had the highest infection rate in the country, with 1,983 people per 100,000 testing positive for the virus. 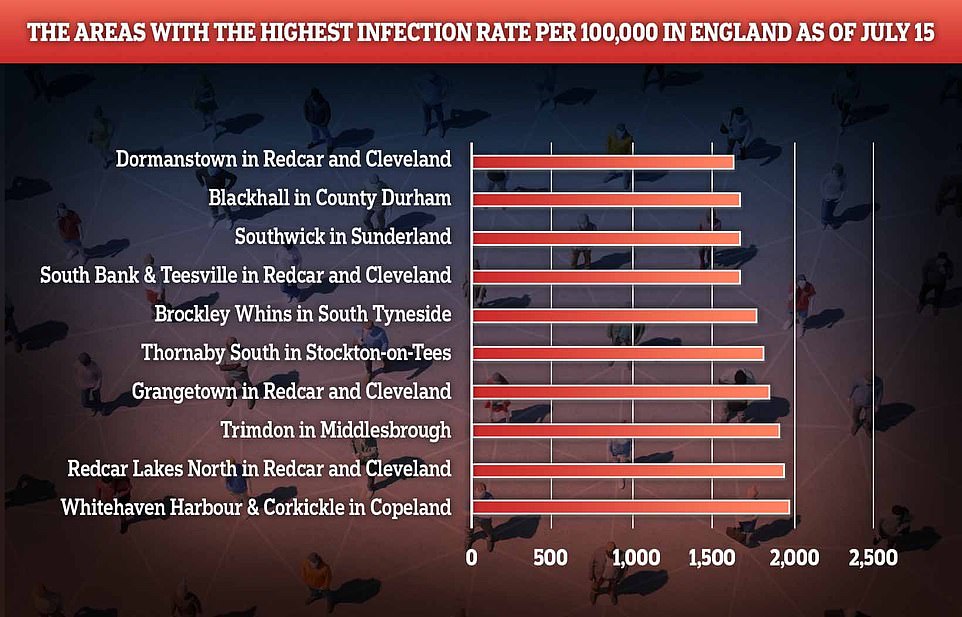 Whitehaven Harbour and Corkickle in Cornwall has the highest infection rate in the country, with 1,983 people per 100,000 testing positive for the virus in the week leading up to July 15. Following closely behind is Redcar Lakes North (1,948), Trimdon in Middlesbrough (1,923) and Grangetown in Redcard and Cleveland (1,857). Redcar and Cleveland is one of the worst-hit regions, as it is home to 10 of the 25 places with the highest infection rates

Supermarkets and a cabinet minister today urged Britons not to panic buy after warnings that food stores face an epidemic of empty shelves this summer unless staff and delivery drivers are exempt from self-isolating when ‘pinged’.

Business Secretary Kwasi Kwarteng also revealed the Government will U-turn and rush out a list of industries allowed to ignore the app later today – less than 48 hours after Downing Street warned there would not be one.

Mr Kwarteng admitted he was ‘concerned’ about food supply issues but urged shoppers not to ‘panic buy’ and said he ‘can’t guarantee’ the ‘pingdemic’ won’t continue beyond August 16 – when rules are due to be dropped for the double jabbed.

Iceland boss Richard Walker has warned that Britain’s creaking food supply chains are on the brink of collapse causing shortages of products in shops with 1,000 of his staff – almost one in 20 – among the 1.7million Britons currently stuck at home.

Shops and businesses across the UK are also struggling with staffing levels and petrol stations have also been forced to close because they can’t get fuel delivered.

UK supermarkets are is in a midst of a perfect storm of problems with tens of thousands of workers self-isolating because of the NHS app. The struggle to stack shelves and staff stores and warehouses is being made worse by a lack of lorry drivers to deliver food.

Redcar and Cleveland is one of the worst-hit regions, being home to 10 of the 25 places with the highest infection rates.

Other parts of England are recording a fraction of those figures, with just 43 people per 100,000 testing positive in Stalham and Sea Palling in North Norfolk. Parts of Breckland (43), Dorset (44) and Thanet (46) also had very low numbers testing positive.

Only Kennington East in South London, Hunstanton in Norfolk and the Isles of Scilly recorded between zero and two cases — meaning they were classed as Covid-free on the Government’s own maps.

Separate analysis showed cases were growing the fastest in Bridgnorth East in Shropshire, where the number of people testing positive jumped from 47 to 739 per 100,000 in just one week.

On the other hand, the number of people testing positive fell in around 18 per cent of all regions in England.

Dr Simon Kolstoe, a senior lecturer in evidence-based healthcare at the University of Portsmouth, told MailOnline: ‘The difference in vaccination rates between regions is concerning because it demonstrates the true level of health inequality in the UK.

‘Covid is a killer, and vaccination is our main, proven, protection against the disease. It is literally a matter of life or death that these regional differences are explored and addressed.’

Dr Alexander Edwards, an associate professor in biomedical technology, told MailOnline: ‘We see the vaccination data for the whole UK looking very positive, yet it’s clear there is a lot of local variation.

‘We need to provide as much support as possible to local public health teams to avoid serious inequality when pockets of low vaccination — possibly overlapping with other health inequalities — can suffer from serious local outbreaks.

‘The vaccines are so clearly working to prevent infection and at the same time reduce severity, but Covid vaccines can really only protect those who get both jabs. The virus spreads so easily it will seek out groups who are less protected.

‘I’ve studied vaccines my whole research career, yet the brilliant success of Covid vaccines continues to astonish me — they are so effective, all the numbers illustrate this — not just the trials but real-world data is spectacular.

‘There remains hope that even as case rates reach record highs, the human cost has been dramatically blunted by our NHS vaccination program.’ 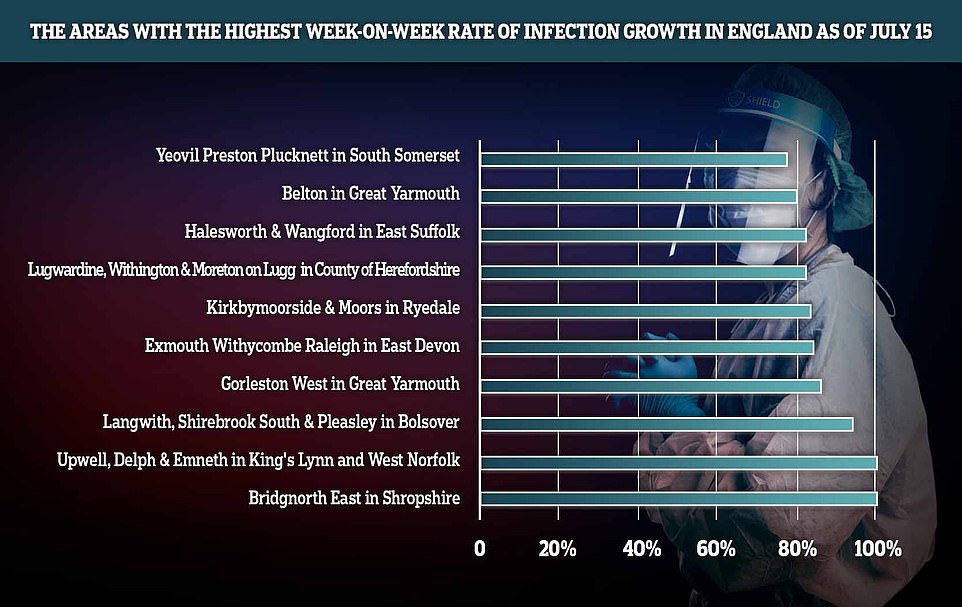 Separate analysis showed cases were growing the fastest in Bridgnorth East in Shropshire, where the number of people testing positive jumped from 47 to 739 per 100,000 in just one week 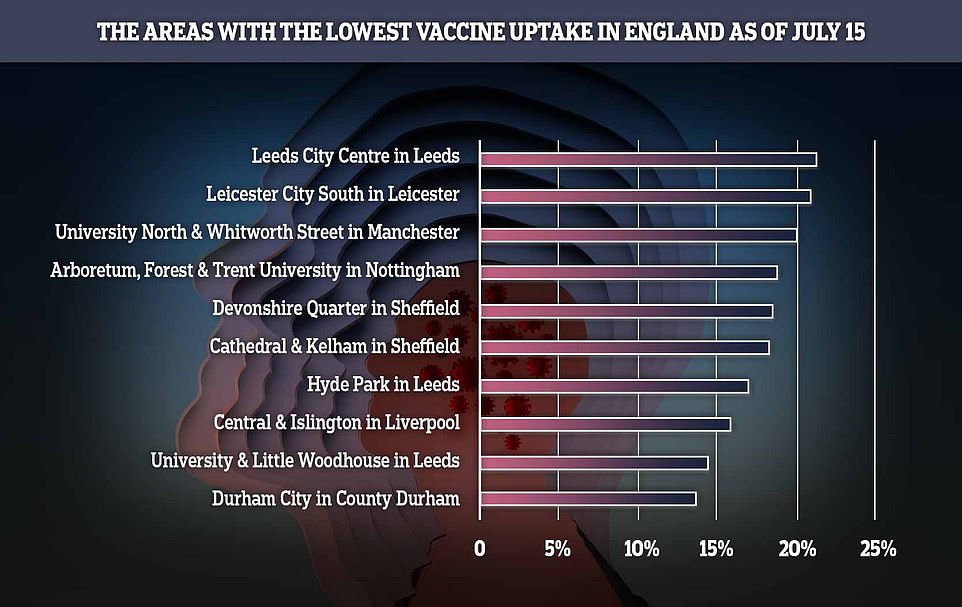 Just 13.5 per cent of people in Durham City have had a single Covid jab, making it the district with the lowest vaccine uptake in England. It is followed by University and Little Woodhouse in Leeds (14.4 per cent), Central and Islington in Liverpool (15.96 per cent) and Hyde Park in Leeds (17 per cent)

Boris’s vaccine passports on the brink of collapse

Labour signalled last night that it could join Tory rebels in voting against vaccine passports as Cabinet ministers questioned whether they would ever come into use.

The Government announced this week that proof of double vaccination will be a ‘condition of entry’ to nightclubs and other busy venues from September.

But a senior Labour source said ministers should require a negative test instead – as even the fully-vaccinated can spread coronavirus.

‘For nightclubs, sporting events or whatever it may be, a negative test is worth more than being double-jabbed,’ the source said.

Cabinet ministers are also critical of the plan, with one questioning whether it was being floated just to encourage young people to get the jab.

Dr Stephen Griffin, an associate professor at the University of Leeds, said it is very difficult to put a precise figure on how high Covid infection rates will get.

It is difficult to predict hospitalisation and death figures but they are already increasing by 40 to 60 per cent every week and older and clinically vulnerable people are most at risk, he added.

Dr Griffin said: ‘It’s encouraging to see many people continuing to wear masks, but I am extremely concerned that this won’t be anywhere near enough to constrain the exponential growth of the Delta variant that we are seeing – this variant is more transmissible than Alpha, which already devastated the country during the early part of 2021.

‘It is also difficult to predict how long the wave might last if we continue without restrictions – we have never allowed SARS-CoV-2 to spread in an uncontrolled fashion, which I maintain is a dangerous and foolhardy approach to take.

‘As we’ve heard many times, the link between infection and severe disease is weakened rather than broken, and if we reach the number of cases per day that are predicted, this will inevitably translate to increased severe disease and death, pressure on the NHS and, frankly, avoidable harm being done.

‘The fact is, a relatively small percentage of a very large number remains a large enough number to cause concern.’

He added ‘there remains a large number of susceptible individuals for the virus to infect’ and that immunity post-infection is ‘greatly inferior to that induced by vaccines’.

Dr Griffin said: ‘We are also creating a crucible of uncontrolled virus growth in the presence of a part-vaccinated population, in essence, a large-scale experiment in SARS-CoV-2 evolution.

‘What is most frustrating is that our incredible vaccines actually provide us with a route out of this pandemic, yet policy makers lack the patience and willpower to link the unlocking process to vaccine coverage in a measured and responsible fashion, such as we are seeing in countries like Israel and Singapore.’ 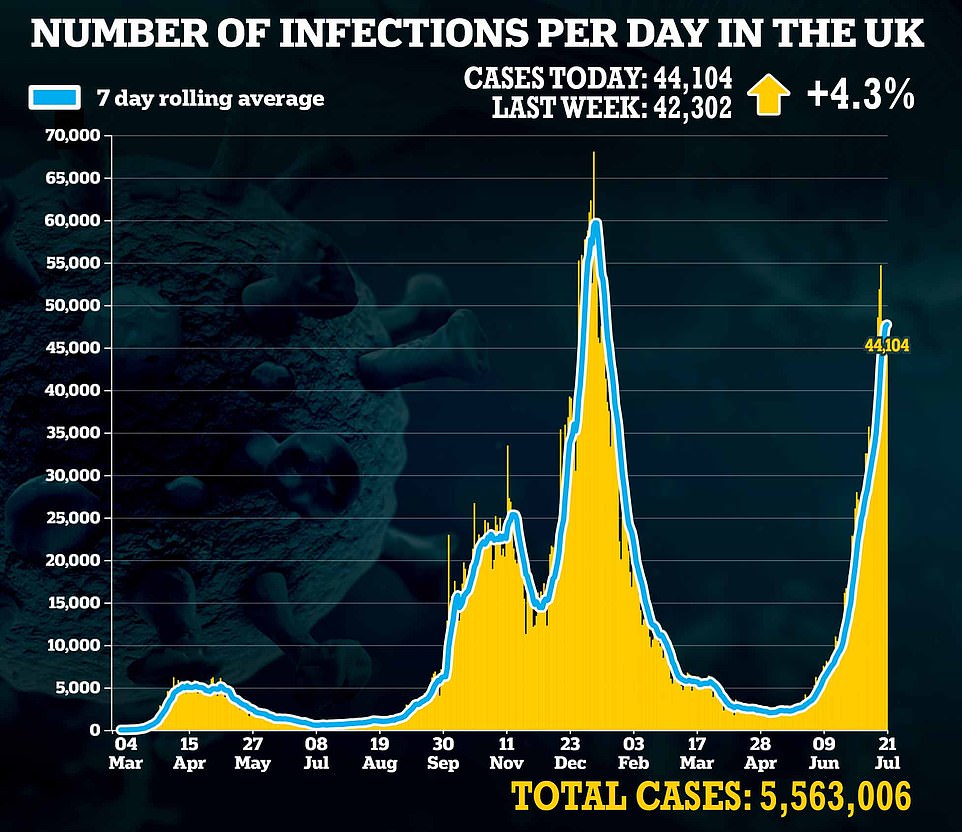 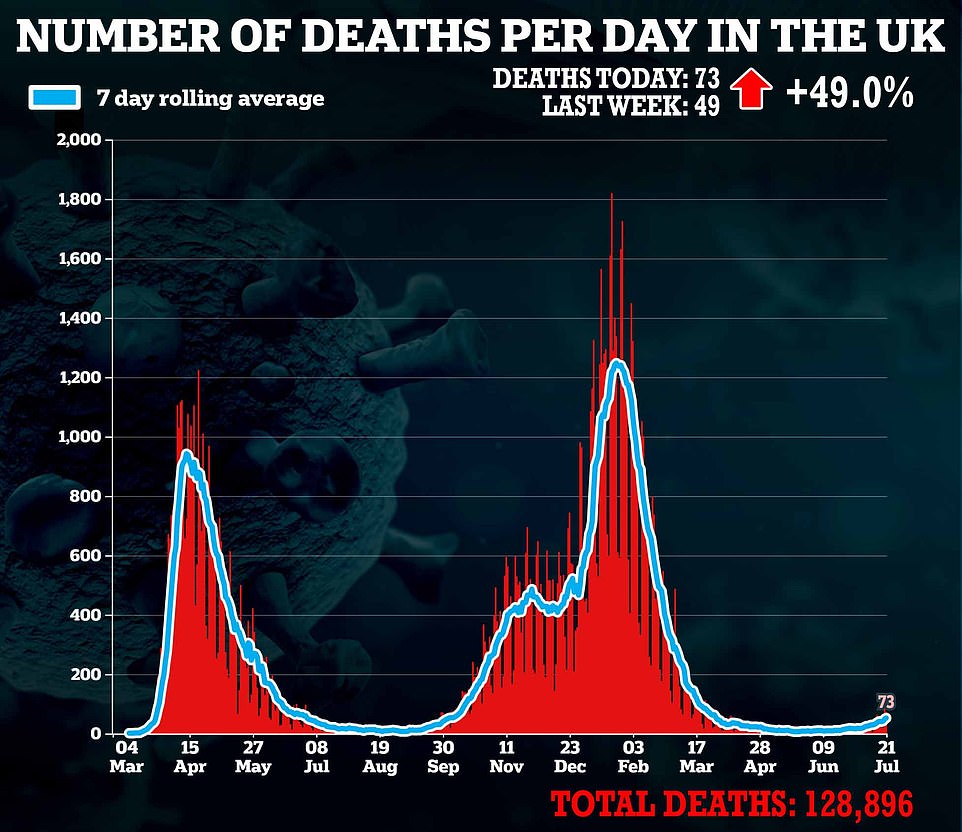 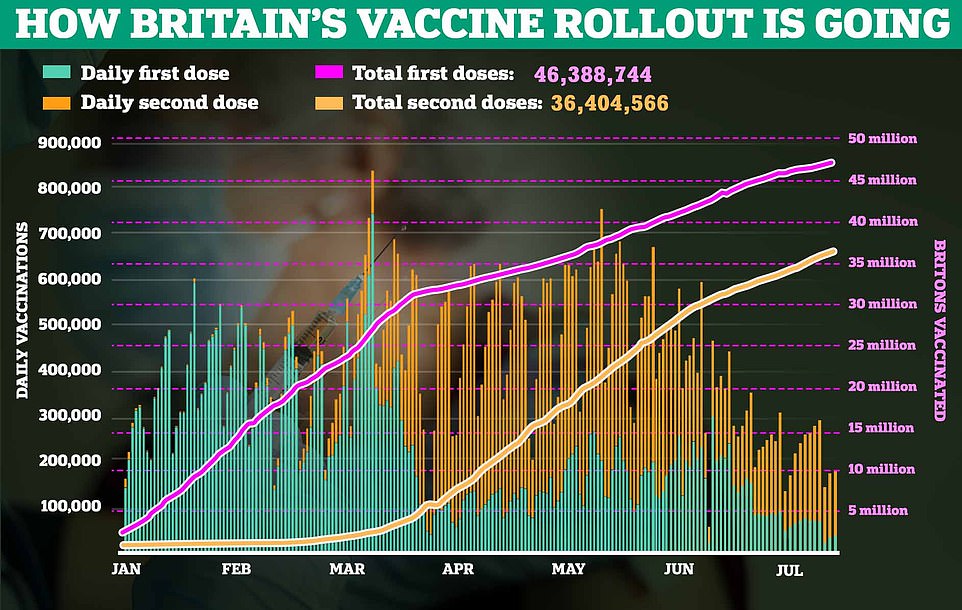 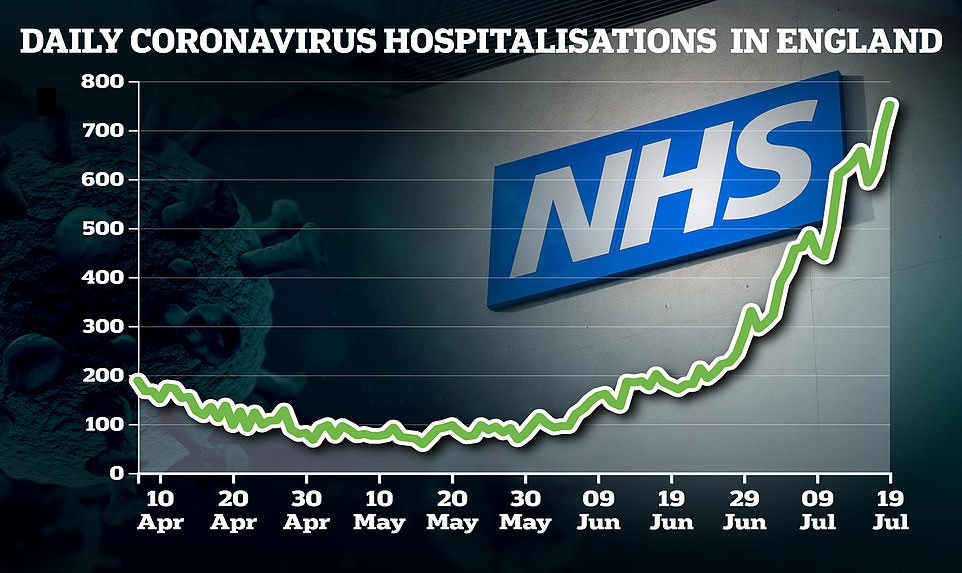 Another 752 infected patients were admitted in England on July 19, the most recent day figures are available for. This was up just 23 per cent on the week before