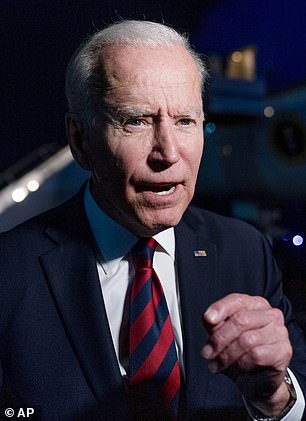 Documents on the Treasury Department website showed the measures targeted an Interior Ministry brigade known popularly as the ‘Boinas Negras’ – or Black Berets.

They have been at the forefront of rounding up protesters and journalists during some of the biggest protests in decades.

The second target for sanctions is Álvaro López Miera, Minister of the Revolutionary Armed Forces of Cuba.

The moves represent the first steps taken by the Biden administration to apply pressure to Havana amid growing calls from the Cuban-American community and lawmakers to show greater support for protesters.

‘The Cuban people are protesting for the fundamental and universal rights they deserve from their government,’ said Treasury Secretary Janet Yellen.

‘Treasury will continue to enforce its Cuba-related sanctions, including those imposed today, to support the people of Cuba in their quest for democracy and relief from the Cuban regime.’

Officials also say they are planning to staff up the embassy in Cuba and are examining the best ways to prevent remittances – cash sent by Cubans working in America – falling into regime hands. 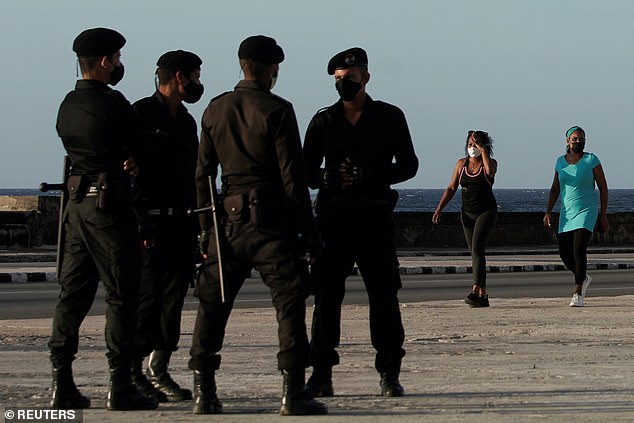 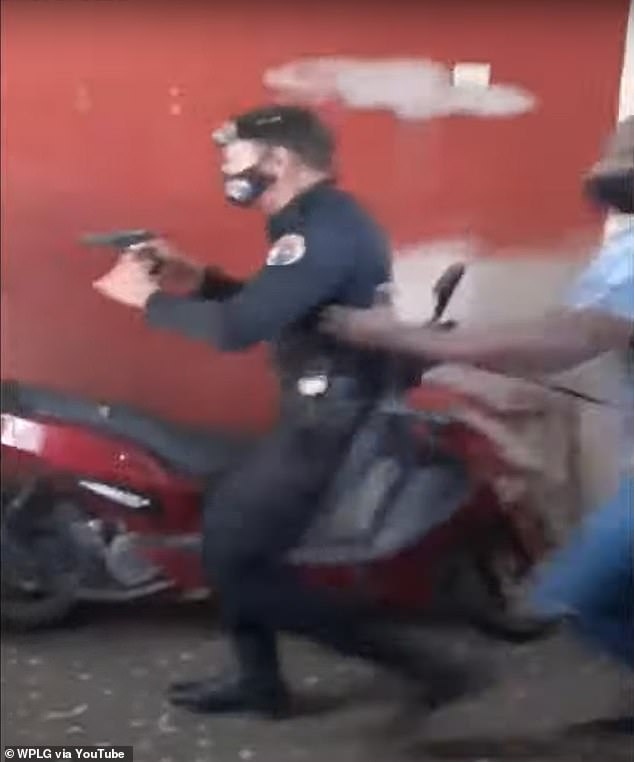 Cubans have described how the Boinas Negros are rounding up protesters. In a video posted on social media, a woman named Marbelis Vazquez in Cuba, recorded the moments they entered her home. She said they shot her husband and took him away in a wheelbarrow, leaving a puddle of blood inside her home, with her children present 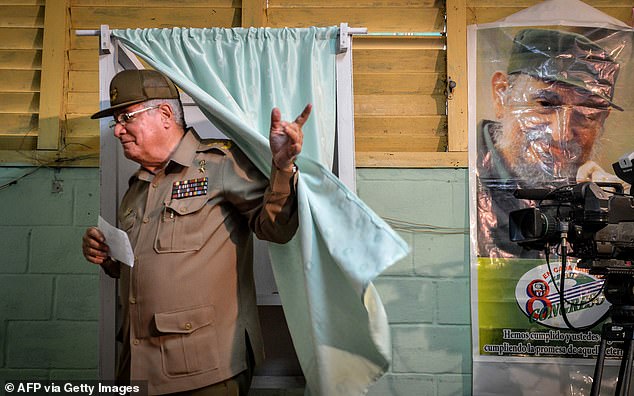 Alvaro Lopez Miera, Minister of the Revolutionary Armed Forces of Cuba, was also sanctioned by the Biden administration on Thursday. He is seen her casting his vote in April 2015 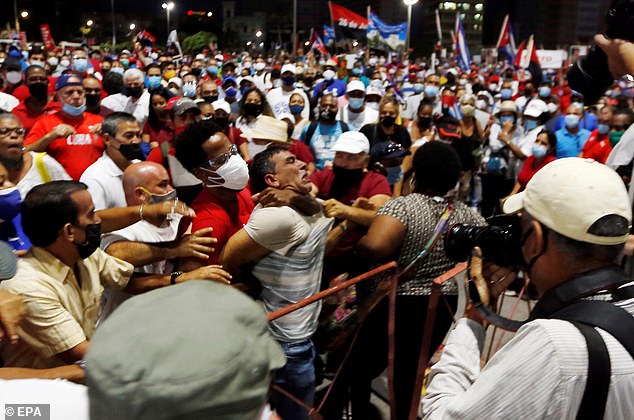 Biden told Democratic Cuban-American activists on Wednesday that he would target individuals and bring in measures to help residents get access to internet during the uprising against the government. A man is arrested during a pro-Revolution demonstration in Havana on July 17, 2021

The sanctions will be imposed under the Global Magnitsky Act and will target a group of officials in Cuba’s Interior and Military forces, the Washington Post reported.

But the Boinas Negras were expected to be among the targets amid multiple reports that they were snatching people at the protests.

Graphic accounts of alleged abuses have emerged from the protests.

A video posted on social media by a woman named Marbelis Vazquez apparently showed the moments when the Boinas Negras entered her home.

She said they shot her husband and took him away in a wheelbarrow, leaving a puddle of blood inside her home, according to an account published by WPLG in Miami.

The family of Henry Constantin, a 37-year-old journalist who runs a publication called La Hora de Cuba, also said he was taken by the unit.

‘They put him in handcuffs and took him away,’ Maria Ferreiro told WPLG.

She added that he was taken to his home were they seized the equipment he uses for his job as a journalist.

‘I’m afraid for his life. I’m desperately worried,’ she added. 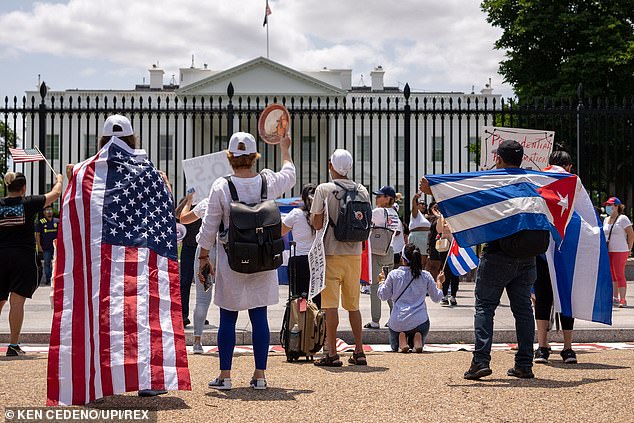 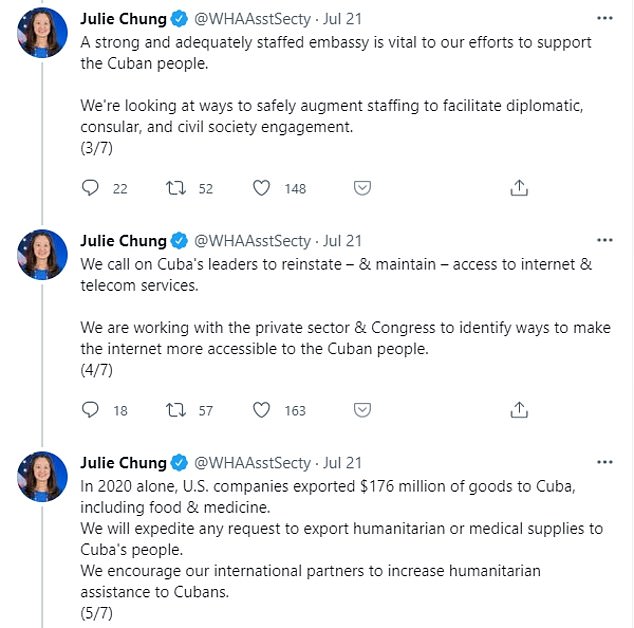 Part of the strategy – including staffing up the embassy in Havana, working on improving internet accessibility, and expediting humanitarian aide – was laid out in a Twitter thread by Julie Chung, acting assistant secretary at the State Department

Thousands of Cubans launched anti-government demonstrations a week ago amid an economic crisis that has emptied store shelves and triggered power cuts.

Human rights groups estimate 500 to 600 people have been detained as part of an ongoing crackdown by communist authorities.

Protesters have also gathered for days outside the White House seeking American help.

Officials say they are planning a range of measures, including coordinating more international pressure on the regime in Havana.

‘We are going to focus on applying hard-hitting sanctions on regime officials responsible for the brutal crackdown,’ said Julie Chung, acting assistant secretary for U.S. Department of State’s Bureau of Western Hemisphere Affairs, in a Twitter thread setting out the plans a day earlier.

The aggressive action will likely irk progressive Democrats, including Bernie Sanders and Alexandria Ocasio-Cortez, who have blamed the US embargo for the uprising.

But it was welcomed by activists.

‘No administration has ever announced that they will hold each individual who violates human rights on the island of Cuba accountable’, Miami political operative Sasha Tirador told Politico.

Republicans including Florida Governor Ron Desantis and Marco Rubio have demanded Biden intervene in the Cuba crisis and have upped calls for the administration to help restore internet to the citizens.

They have urged Biden to approve a serious of high-altitude balloons to be deployed off the coast to act as giant WiFi hotspots.

However, according to reports, the administration is now looking into a way to provide internet access via Virtual Private Network, or VPN, to help Cubans get online and stop the government spying on them.

On Thursday night, DeSantis called on the president to ‘step up and be on the side of freedom’ by giving US companies the go-ahead to restore internet to the island nation.

‘The internet access is something we have the capability of doing,’ he said.

‘We have companies in the US that want to do it, but they need the okay of the federal government.’ 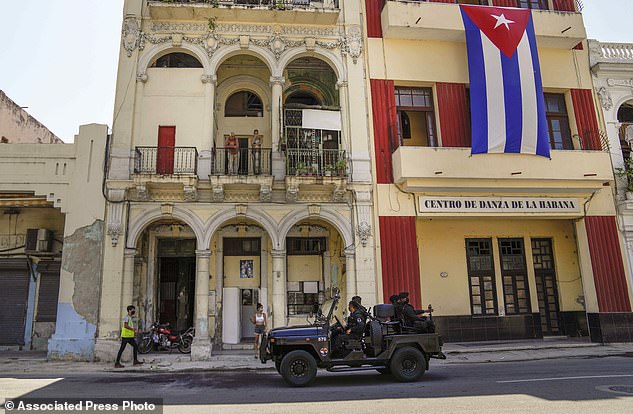 Special forces police patrol the streets in Havana, Cuba, Wednesday after the government executed an internet blackout on residents

Dozens of people protesting against the Cuban government gathered for the town hall where Senator Marco Rubio also spoke, branding Biden administration officials of being ‘sympathizers’ of the government’s ‘evil regime.’

Thousands of Cubans have taken to the streets this month in the largest protests the country has seen in more than two decades to demonstrate against chronic shortages of basic goods, power cuts and the Communist government regime.

The government responded by enforcing an internet blackout, leaving much of the island without the ability to communicate and blocking news and images from the protests from being shared.

DeSantis last week asked Biden to send federal assistance to provide internet access to the people of Cuba while the president said he was looking at potential ways the US could assist.

The Florida governor repeated his calls for Biden to step in and restore internet to the country Wednesday as he accused the president of leaving ‘folks out to dry.’

‘He has it within his authority to do that. He could make it happen. And if he’s willing to do that, I think it would make a positive difference,’ he told Hannity.

‘As it stands now, he is basically just sitting there doing nothing.

‘He is leaving these folks out to dry and what’s going to end up happening if they don’t get any type of assistance, the regime will continue to clamp down and they will eventually stamp this out and then they will remain even stronger in power.

‘And that would be a huge blow to the cause of freedom.’

DeSantis said it is ‘incumbent’ on the US to support the people of Cuba in their struggles against the ‘communist regime’. 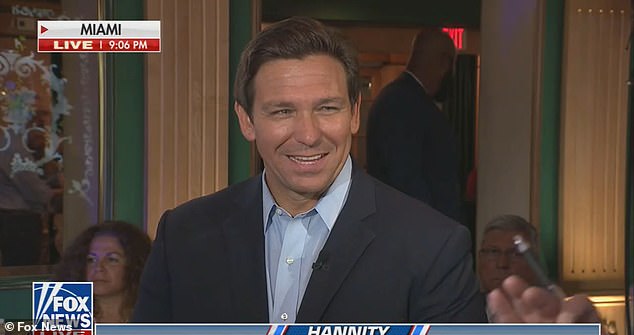 GIANT BALLOONS, SATELLITES AND CIRCUMVENTION TOOLS: HOW THE BIDEN ADMINISTRATION COULD GIVE CUBA INTERNET 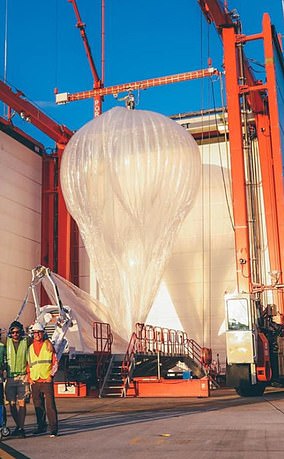 The high-altitude balloons, roughly the size of a tennis court, are a way to get internet access to remote areas and were used around Puerto Rico in 2017 when Hurricane Maria hit

On Thursday Ron DeSantis suggested the Biden administration send balloons to Cuba to act as floating WiFi hotpots to help the island’s people get back online after the communist regime shut down their access.

FCC Commissioner Brendan Carr said the balloons would be deployed around 20 miles off Cuba, but would require Department of Defense and Federal Aviation Administration approval.

It is also not clear how much they would cost and how much time it would take to implement.

The high-altitude balloons, roughly the size of a tennis court, are a way to get internet access to remote areas and were used around Puerto Rico in 2017 when Hurricane Maria hit.

The balloons travel approximately 12 miles (20km) above the Earth’s surface in the stratosphere.

Winds in the stratosphere are stratified, and each layer of wind varies in speed and direction, so the balloons use software algorithms to determine where its balloons need to go.

It then moves each one into a layer of wind blowing in the right direction. By moving with the wind, the balloons can be arranged to form one large communications network.

The balloons harness power from card table-sized solar panels that dangle below them, and they can gather enough charge in four hours to power them for a day.

Each balloon can provide connectivity to a ground area of around 25 miles (40km) in diameter using LTE, also referred to as 4G, technology.

Google’s parent company Alphabet had an internet balloon business called Project Loon. The firm was responsible for sending them to Puerto Rico in the aftermath of Maria and also deployed them in remote areas of Kenya.

Alphabet had hoped to put thousands of balloons in the stratosphere, but in January 2020, the CEO said the project was no longer commercially viable and shut it down.

However Raven Industries partnered with Google and was heavily involved in the project for nearly a decade.

They still have the technology, so could be tapped if the Biden administration decides to go down that route.

FCC Commissioner Brendan Carr said he has discussed the use of Raven, but also suggested other forms of technology.

Psiphon said 1.389 million users accessed the open web from Cuba through its network on Thursday, as well as 1.238 million as noon EDT on Friday.

Its open source circumvention tool can be downloaded from app stores like Google Play or Apple to ‘maximize your chances of bypassing censorship,’ according to the company. Canadian university researchers developed the software in 2007 to let users evade governmental internet firewalls.

‘We must stand with those opposing authoritarian regimes,’ said U.S. Senator Marsha Blackburn, a congressional supporter of U.S. funding for the network.

Senator Bob Menendez told MSNBC on Tuesday the US should be ‘looking at how we can expand access to the internet, consider satellite feeds of the internet so people in the island can communicate with each other.’

DeSantis also suggested the US may be able to beam satellite to help the protesters get back online and called on private companies to offer up their services.

Part of the reason the Cuba government shut down the internet was because they blamed US social media ‘campaigns’ for the unrest. 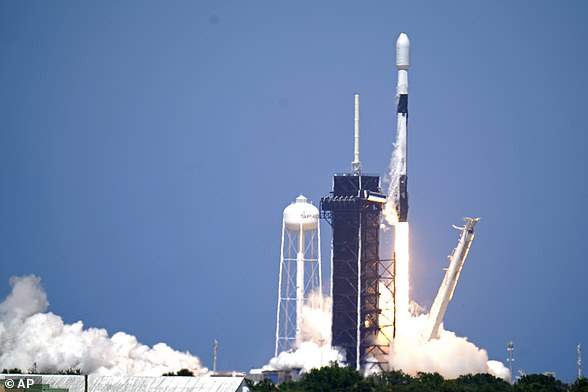 SpaceX launched a new batch of Starlinks Tuesday using a recycled Falcon 9 rocket to ferry the internet satellites to space. The rocket took off at 3:01pm ET from Pad 39A at NASA’s Kennedy Space Center in Cape Canaveral, Florida as blue skies covered the area

Space X have invested $10billion in their Starlink satellites. Elon Musk said in June that more 1,500 satellites aloft and expects service to go global by August.

Starlink satellites are at around 300 miles (500km) above the surface.

They form a constellation of thousands of satellites, designed to provide low-cost broadband internet service from low Earth orbit.

The constellation, informally known as Starlink, and under development at SpaceX’s facilities in Redmond, Washington.

Its goal is to beam superfast internet into your home from space.