The victim of a shooting who was left to die on his doorstep by gunmen who fled in a getaway car has been named as Matthias Poleon.

Neighbours heard two shots as Mr Poleon, 27, was ‘horrifically and brutally’ gunned down outside his home in Balham, south London.

Armed police were called at around 10.50pm to reports of a man suffering gunshot wounds on Bedford Hill.

The London Ambulance Service attended and rushed Mr Poleon to hospital but he was pronounced dead just over 45 minutes later. 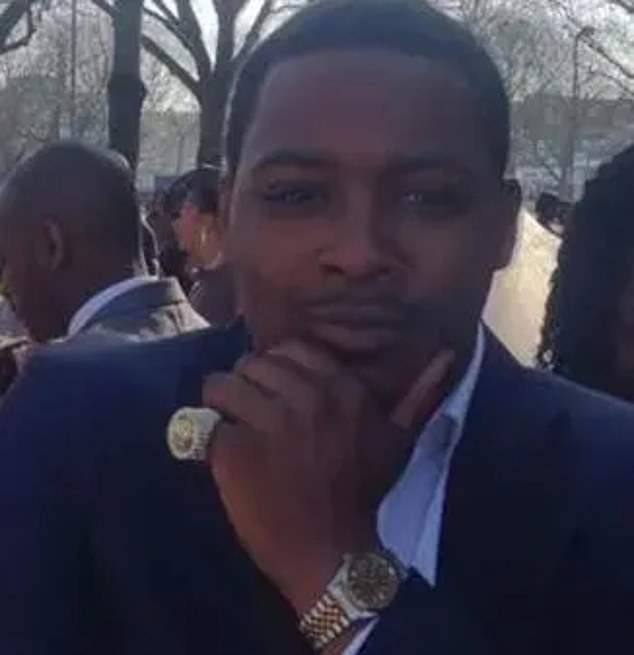 The victim of a shooting who was left to die on his doorstep in Balham, south London, on Thursday night has been named as Matthias Poleon

Detective chief inspector Katherine Goodwin, said: ‘Matthias was leaving his home address when he was set upon without warning by at two suspects wearing facemasks who fired at him and and then fled the scene in a silver hatchback vehicle — possibly a Peugeot, or a VW Golf — in the direction of Balham town centre.

‘I implore anyone who saw a suspicious vehicle in the area around of the time of the incident to contact us.

‘Matthias was horrifically and brutally shot at his front door and left to die in the doorway.

‘His friends and members of the public came to his aid in a bid to save his life, but his injuries were too great.

‘The people responsible for this needless loss of life are violent criminals and must be apprehended.’ 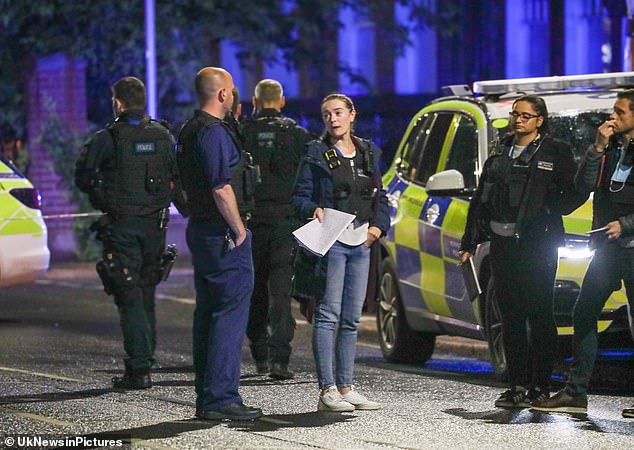 Armed police officers were called at around 10.50pm last night to reports of a man suffering gunshot wounds on Bedford Hill in Wandsworth, London 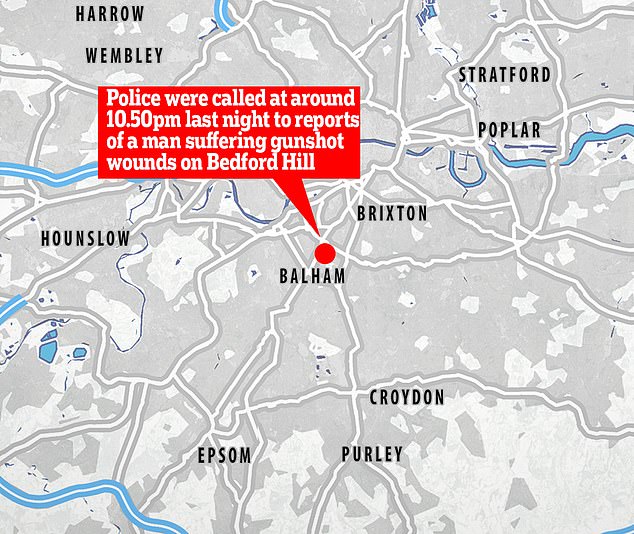 Properties in the neighbourhood of Balham, where the shooting took place, have an overall average price of nearly £1million, according to Rightmove

She continued: ‘If you have dash cam footage, doorbell footage, or saw anything that you think might assist police, you must tell us.

‘The slightest piece of information could prove crucial in helping us catch two dangerous offenders who have access to a firearm.

‘Matthias family are at the beginning of an incredible ordeal.

‘Think of their grieving, think of their suffering, and please do the right thing and tell police what you know. Crimestoppers is a 100 per cent anonymous method if you do not want to speak to police directly.

‘What matters most is that you make the call.’

No arrests have been made and enquiries into the circumstances remain ongoing, added the force.

A local, who did not wish to be named, said: ‘I heard two pops that made my dog jump up. 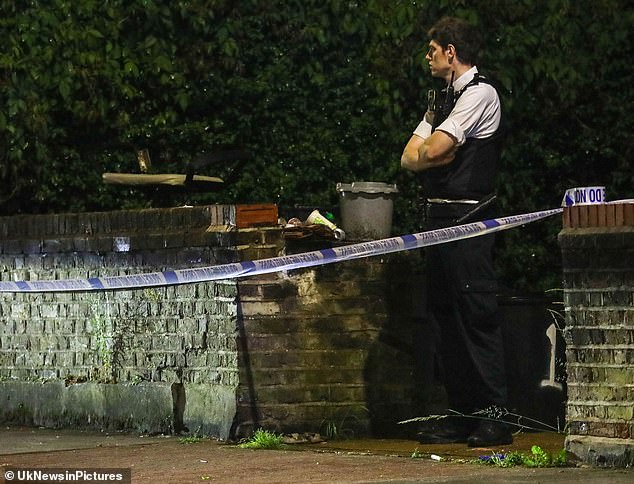 A police officer pictured at the cordoned-off scene last night. No arrests have been made and enquiries into the circumstances remain ongoing, said the Met 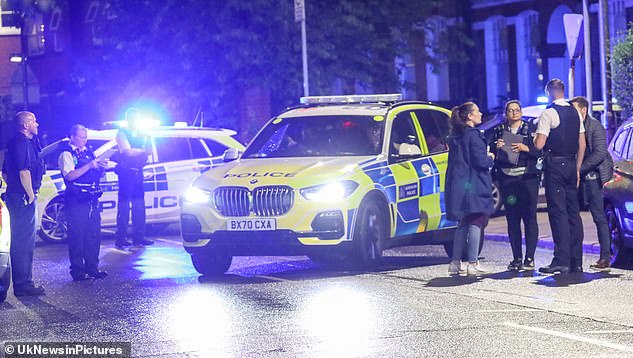 Police officers and vehicles at the scene last night. London Ambulance Service attended and rushed the victim to hospital, but he was pronounced dead just over 45 minutes later

‘I came out and looked up the street, but didn’t see anything. All I heard was two shots. The dog was very animated by the sound.’

She added: ‘That’s not the first time something has happened here – three or four years ago there was a drive-by shooting incident.

‘And then two years ago there was an acid attack and stabbing.

‘There’s a lot of movement in and out and lots of noise issues. It’s a housing association property. There’s high turnover.

‘At one point two summers ago they had an illegal nightclub there. The music was really loud. It is a source of deep disquiet and discomfort.

‘Somebody last night said it was a halfway house. It’s awful that someone’s lost their life.’ 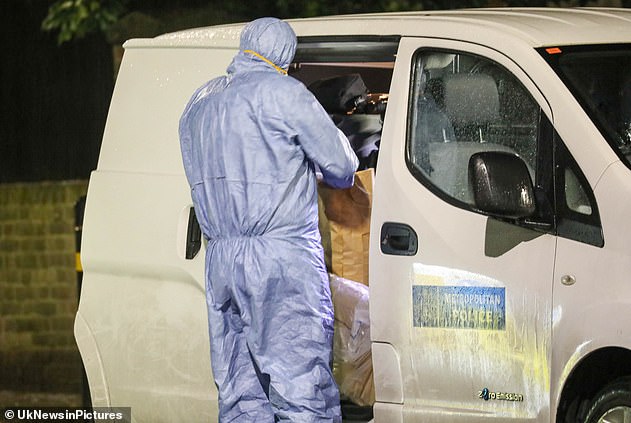 Forensic officers from the Met Police at the scene last night. In a statement released this morning, the force said: ‘A murder investigation is underway following a shooting in Balham’ 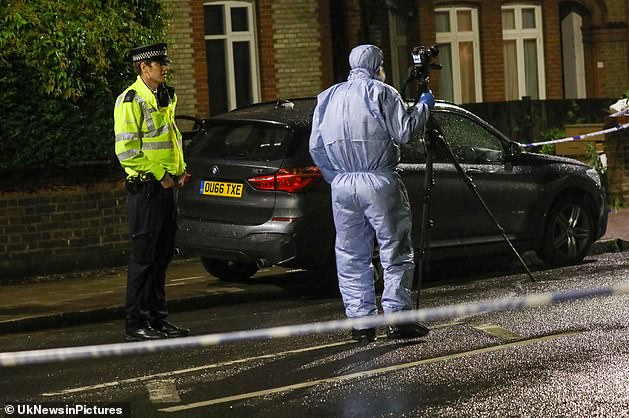 A policeman and forensic officer on Bedford Hill – home to one of the best comedy clubs in the country where Ed Sheeran, U2 and The Clash have performed – in Wandsworth last night 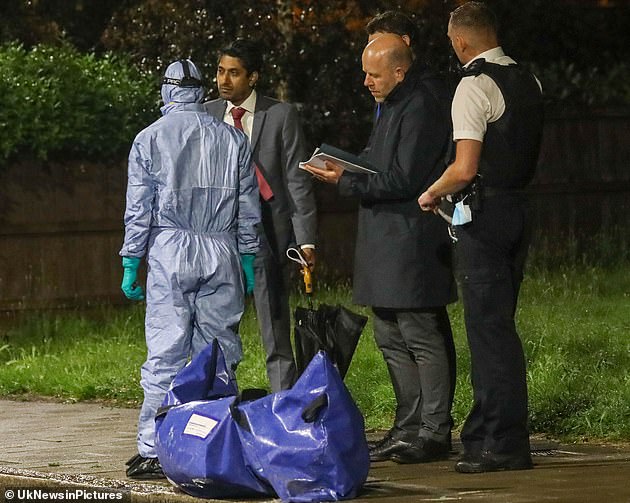 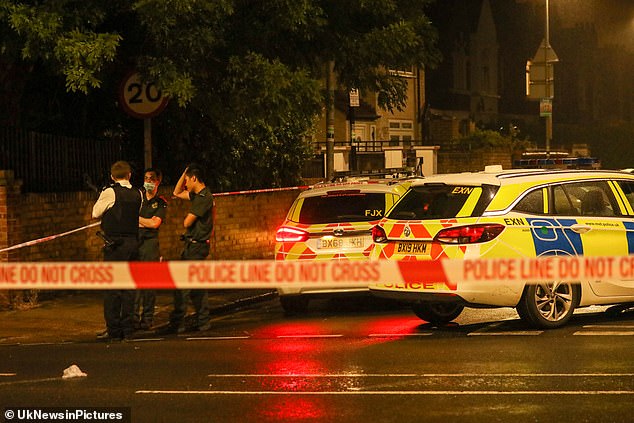 A police officer is seen speaking with emergency service workers at the taped-off scene in Balham, south London, on Thursday night

They were concentrating on the driveway of a residential address, believed by neighbours to be a halfway house run by a housing association.

The officers also appeared to be searching a vehicle parked on the driveway, while uniformed police stood guard at the edges of a cordon stretching around 200 yards along the road.

Properties in Balham, where the shooting took place, have an overall average price of nearly £1million.

Flats in the affluent area sell for around £615,000 with terraced properties going for £1.27million and semi-detached properties fetching £1.58million.