By Nick Callow For Mailonline

Cameron Norrie is one match away from becoming only the second British tennis player after Andy Murray to win Queen’s after stunning second seed Denis Shapovalov in a clinical straight sets semi-final victory.

An added bonus for Norrie, win or lose the final against Italian NO.1 seed Matteo Berrettini, will be a career high world ranking in the low 30s to earn him a seeding at Wimbledon at the end of the month.

That means he will seeded in the Wimbledon draw for the first time as he bids to win his first ATP title in his third final in seven weeks. 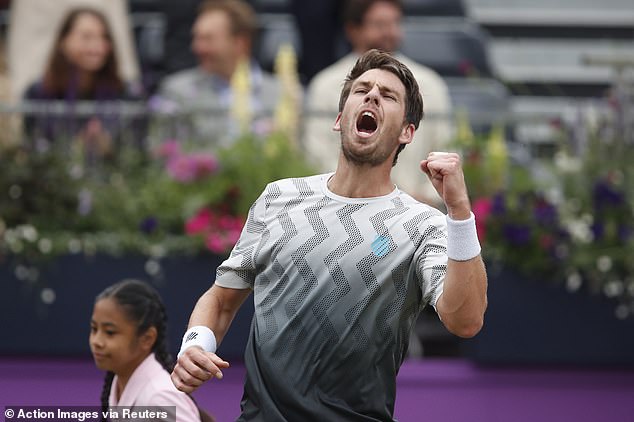 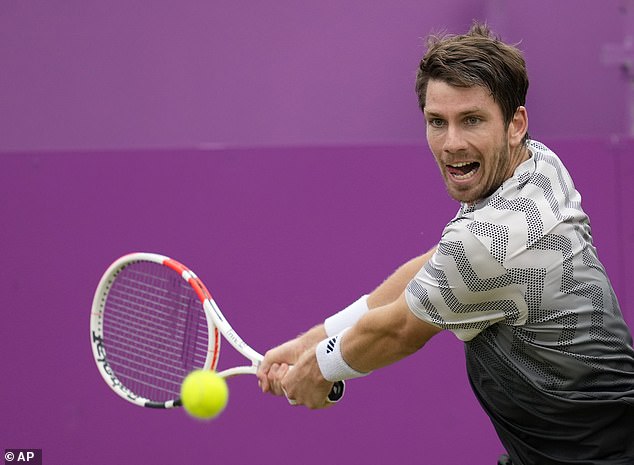 Norrie, 25, is having the best year of his life as he prepares to win his first ATP title in his third final in seven weeks.

A debut title on grass following his 7-5 6-3 victory over his highly-rated Canadian opponent, will be a career highlight and make him a force to be feared at Wimbledon too.

The British NO.2 revealed afterwards he will seek out some advice from Murray and the country’s NO.1 Dan Evans after both were defeated by Italian favourite Berrettini on his route to the final.

Bursting with pride and emotion in front of a loud west London Queen’s club crowd, he admitted: ‘It hasn’t really sunk in yet. I played very, very good tennis.

‘I am so pleased to be through to the final here. I cannot even describe it. Literally it’s nice to get over the line there. All credit to Denis, it was a tough match.

‘The crowd definitely helped me towards the end there and helped get me over the line on another gloomy night here in London.’

Big-serving Berrettini will represent another step up and Norrie admitted it will not be easy to follow in the footsteps of five-time Queen’s champion Murray.

He added: ‘I have watched him a little bit throughout the week.

‘He has a huge serve. He is one of the best players on the Tour at the moment. A good forehand, likes a drop shot.

‘Maybe I will have a chat to Evo and Andy to see if they have any tips for me.

‘I saw him play earlier and he had a really good day, so it is not going to be easy.’ 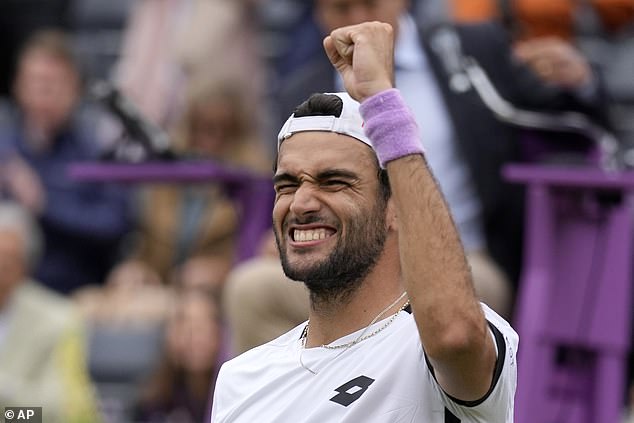 Norrie, born in South Africa to a Scottish father and Welsh mother, did not instantly look at home in this match.

He lost his serve in the opening game, but crucially broke back to level at 3-3 and then take the first set with a two-handed back hand that sent his opponent slipping despairingly flat on his face into the grass.

Shapovalov, who was infamously disqualified in a Davis Cup tie against Great Britain for striking an umpire with a ball four years ago, called a brief halt to receive medical treatment on an apparent leg muscle injury at the start of the second set.

The animated 22-year-old has an extremely physical game and had to withdraw from the recent French Open with a shoulder problem.

But he played on without any obvious discomfort until Norrie broke him again with another blistering backhand down the line to lead 5-3 and then serve for the match.

Only Novak Djokovic and Andrey Rublev had won more ATP tour matches this year than Norrie coming into Queen’s, so no wonder he looked assured as he completed his victory in just over 93 minutes.