Arizona police chase and shoot a man, 35, after he plowed his vehicle into a group of cyclists during a benefit race and then fled – with four of the seven who were taken to hospital now in a critical condition

By Rachel Sharp For Dailymail.com

Arizona police have shot a 35-year-old male suspect after he plowed his vehicle into a group of cyclists on a benefit race leaving seven victims hospitalized.

The incident unfolded about 7:25 am local time while people were taking part in the Bike the Bluff charity race in Show Low, near Phoenix.

The suspect plowed into the cyclists in his Ford F-150 before fleeing the scene.

Police chased the suspect before shooting him behind a nearby hardware store.

Seven victims have been taken to hospital, according to the Show Low Police Department.

The condition of the driver, who has been described as a white 35-year-old, is not known.

Police have not releases the identities of the victims or the suspect at this time.

Bike the Bluff is a 58-mile race to raise money for the Mountain Christian School in Show Low, a town in the White Mountains located about a three-hour drive from Phoenix. 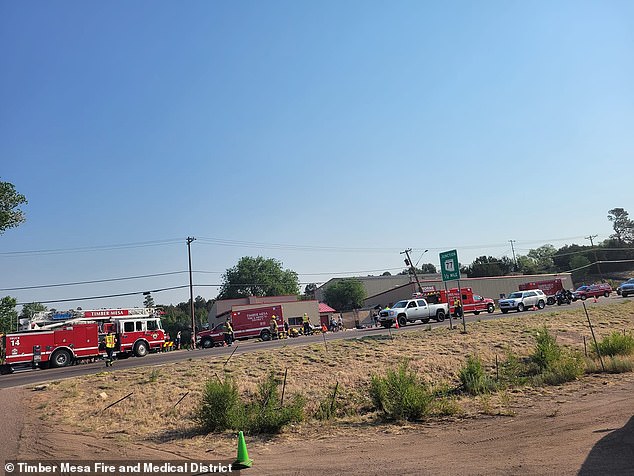 Arizona police shoot man, 35, after he plowed vehicle into a group of cyclists on a benefit leaving 7 hospitalized