Roberto Mancini played down talk about Italy becoming contenders for the Europeans Championships after beating Turkey 3-0 by saying there’s a ‘long way to go’ to Wembley.

The Azzurri got their tournament off to a flying start as three second-half goals clinched victory over their Group A opponents on Friday night, with the strikes coming courtesy of Merih Demiral’s own goal, Ciro Immobile and Lorenzo Insigne.

Italy have been branded as many pundits’ dark horses for the tournament but Mancini cooled any discussions about becoming contenders for the Wembley final on July 11 after the opening day win. 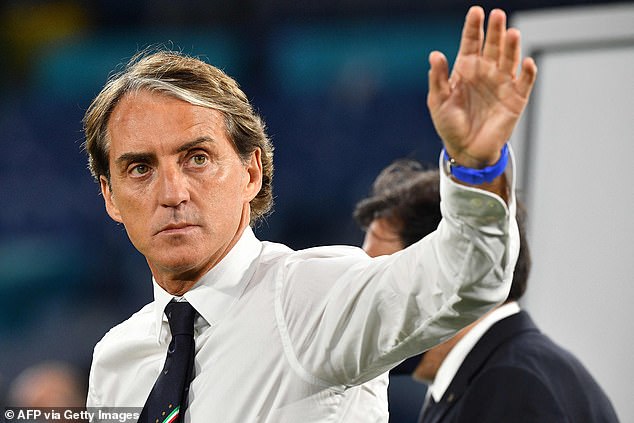 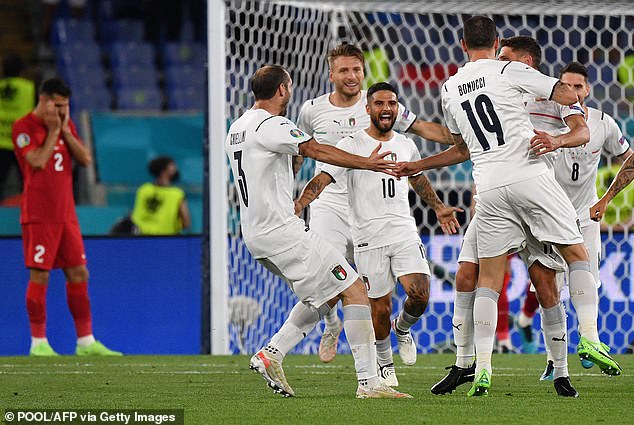 In his post-match interview, Mancini said: ‘We had a good game, it was important to start well here in Rome, and I think it is a satisfaction for everyone with us, for the public and all Italians.

‘It was a beautiful evening, I hope there are many others like this.

When pressed about his side’s chances of winning Euro 2020, Mancini said: ‘There’s still a long way to go, there are still six (steps towards Wembley).’

Italy were frustrated by Turkey during the first-half at the Stadio Olimpico, with the opening match being played in front of 16,000 supporters in the Italian capital. 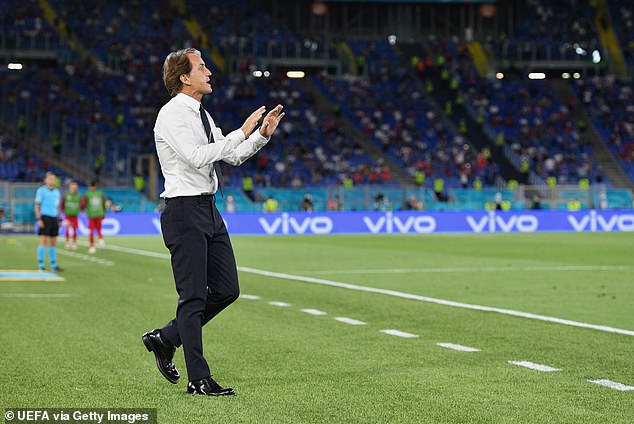 Mancini reiterated there are still ‘six steps to go’ until the July 11 final at Wembley, London

Mancini’s men dominated the possession but both them and Turkey created very little in the opening 45 minutes, with the best chance falling to Italy’s Giorgio Chiellini, who had a free header from a corner saved from close range.

Mancini praised not only his side’s patience but the support from the Rome crowd, with the Italy boss confirming that the many Italians inside the stadium made a difference on Friday night.

He continued: ‘We played a good game, even in the first half without being able to score. It wasn’t easy, we were at our first game and they are a great team. There was a lot of help from the crowd, the team played really well. 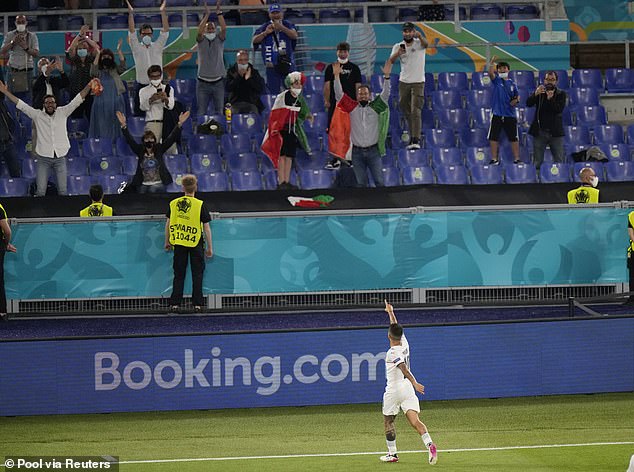 Mancini paid tribute to the Stadio Olimpico crowd in Rome, which he says made a difference

‘We are happy. It was decisive to move the ball quickly in order to reach the opposition goal with the extra man (out wide).

‘We have played many teams that have done what Turkey did this evening. They put everyone (back) there, give you little space and make it hard for you to score,’ said Mancini.

‘But the lads had patience. We waited, kept playing, tried to get that goal, then we got it. The lads did really well.

‘The first half wasn’t straightforward and in a game like that, even if they (Turkey) put everyone back, if you give one (goal) away on the break, the game changes.’

Striker Immobile, who got his campaign off to a brilliant start by netting Italy’s second goal, confirmed that Italy’s game plan required patience and moving the ball quickly 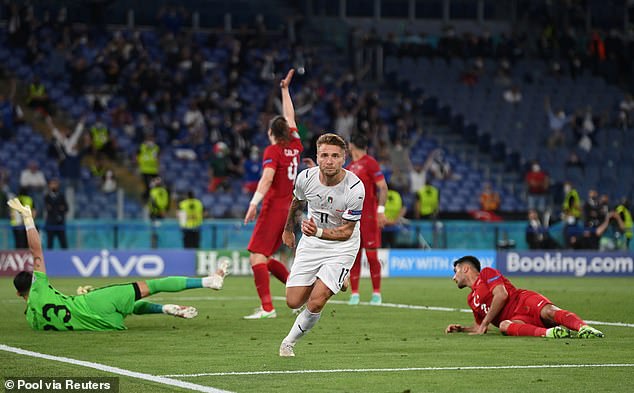 The forward added: ‘We showed patience in the first half. Turkey are a strong side and caused problems for many top teams.

‘We tried to tire them out, moving the ball left and right and trying to spread them. Unfortunately, we regularly struggled to break their wall.’

Italy’s next game will see them face Switzerland on Wednesday night, also at the Stadio Olimpico, before taking on Rob Page’s Wales in their final group game four days later.

Turkey’s remaining Group A fixtures against the Welsh, then the Swiss, are on the same days as Italy’s next matches.