What a joyous breath of fresh Cornish air it was to see the new Mrs Johnson walk hand-in-hand with her husband, her wedding ring glinting in the sunlight, alongside President Biden and his wife Jill ahead of the G7 summit.

Forget Boris, it was a PR triumph for our new first Lady in Red, with pictures on the front pages of every newspaper and footage beamed on news channels across the world.

Barefoot in the sand, long blonde hair flowing in the breeze, she was frolicking in the sea with arms outstretched to baby Wilfred.

Who could not rejoice at such happiness?

Well, perhaps the woman Boris was married to for 25 years, for one — distinguished lawyer Marina Wheeler, 56.

As any wife knows who’s been dumped for a younger woman, those images of Carrie will be like a dagger through her heart. 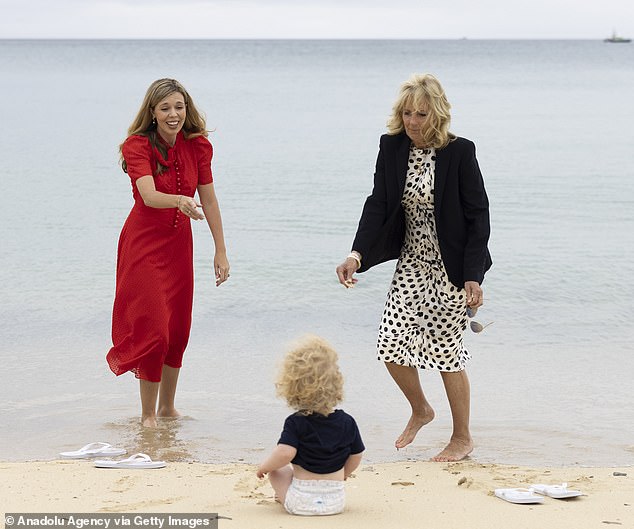 Barefoot in the sand, long blonde hair flowing in the breeze, she was frolicking in the sea with arms outstretched to baby Wilfred 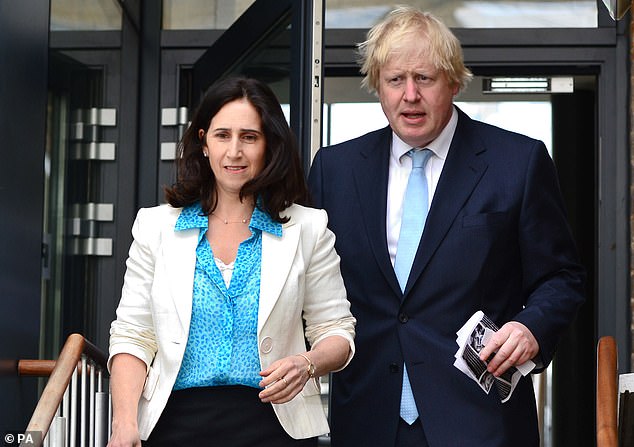 Who could not rejoice at such happiness? Well, perhaps the woman Boris was married to for 25 years, for one – distinguished lawyer Marina Wheeler, 56

Unlike most betrayed partners who can quietly rebuild their lives and steer away from constant reminders of their ex, Marina simply can’t avoid them.

They’re everywhere, in pictures and stories and footage, and no end of them in sight.

And what about Marina and Boris’s four children?

Just imagine how they feel as they see the woman who usurped their beloved mum’s place at Boris’s side parade Wilfred for the world’s media.

How galling for them that it is Carrie, 33, strutting the world stage, not Marina who put in so much hard work, put up with so much and kept things together for so long for the sake of the family.

Marina is the woman who nurtured and supported Boris’s dreams of glory, of one day becoming PM, and yet now she sees Carrie who has known him for barely a few years revelling in the spoils of his success.

It is as if Boris has won the Lottery jackpot, and she is the ex looking on as her successor shares his winnings.

Boris’s affair with Carrie was the last straw for Marina after years of tolerating his infidelity. She’d put up with him because she believed in him but the relationship broke down as she was battling cervical cancer.

As Marina said in an interview with Good Housekeeping magazine after the split: ‘My four children and I already had tough stuff to handle.

‘My 25-year marriage had become impossible, so I ended it.’

We know marriages go wrong and people move on.

But for Marina it must be so hard – because Carrie’s triumph is there before her every hour, every day.

The time for compassion

A victory for common sense after a High Court ruled that a woman who lost her job for tweeting that transgender people cannot change sex, that ‘men cannot change into women’, had a belief protected in law.

And time also for some compassion.

I have one transgender friend who, despite her lovely long hair and pretty clothes, at 6ft 2in and still with her prominent Adam’s apple, feels like an outsider, trapped in the wrong body.

Anyone has the right to express their views about what makes a man or a woman, but I’d like people to imagine what it would be like walking in my trans friend’s shoes before they tweet.

In his opening speech to G7 leaders yesterday, Boris Johnson urged the world to be more ‘feminine’ and ‘gender neutral’.

This from the man who once wrote an article reviewing the ‘hot totty’ at a Labour Party conference, remarking that the ‘Tottymeter’ reading was higher than any conference ever.

After more than a year of brutal family recriminations, what could be more unexpected than the Queen and Prince Philip’s youngest child Prince Edward being the one who’s pouring oil on troubled royal waters?

Giving an interview to mark what would have been his father’s 100th birthday, the Earl of Wessex was calm and measured when asked about Harry and Meghan. 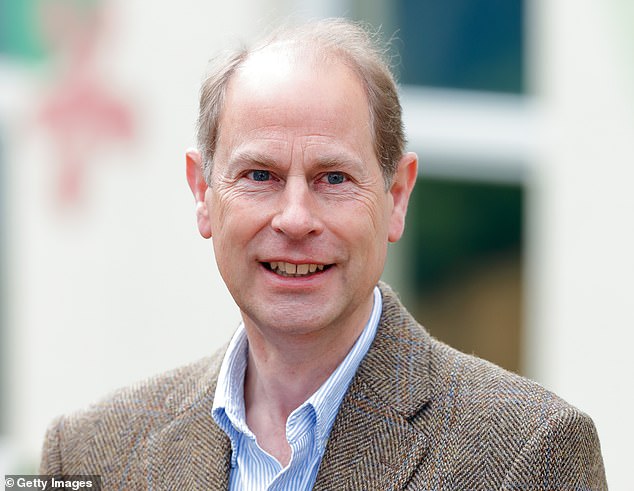 Giving an interview to mark what would have been his father’s 100th birthday, the Earl of Wessex was calm and measured when asked about Harry and Meghan

He wished them the best of luck, diplomatically adding that ‘we’ve all had excessive intrusion in our lives, we’ve all dealt with it in slightly different ways’.

Go back a couple of decades and his TV company Ardent Productions was a laughing stock, while his wife Sophie’s PR company was caught up in a cash for access scandal.

What a comeback! These two are not only the Queen’s constant companions but the hidden jewels in her crown.

Edward’s big sister Anne added her tributes, saying she was proud of the ‘mend and make do’ spirit her father had encouraged in her.

She added that, even though he lived to 99, ‘you are never really ready’ to lose your father.

Too true, sadly none of us ever are.

Bafta vowed to make this year’s awards inclusive, and they did just that, giving gongs for best actress and best mini-series to the gifted Michaela Coel for I May Destroy You.

The heroine Arabella (Michaela) destroys the life of a man she took to her bed and accuses him of being a rapist.

Crikey! Can I be the only one yearning to rewatch The Darling Buds Of May!

Not chasing that BBC obsession — the youth market — are they?

Keep your sunglasses on to hide any wrinkles.

Leave the pool via the steps to make your thighs look firmer.

Grip the handles of those steps tight to get rid of your bingo wings. 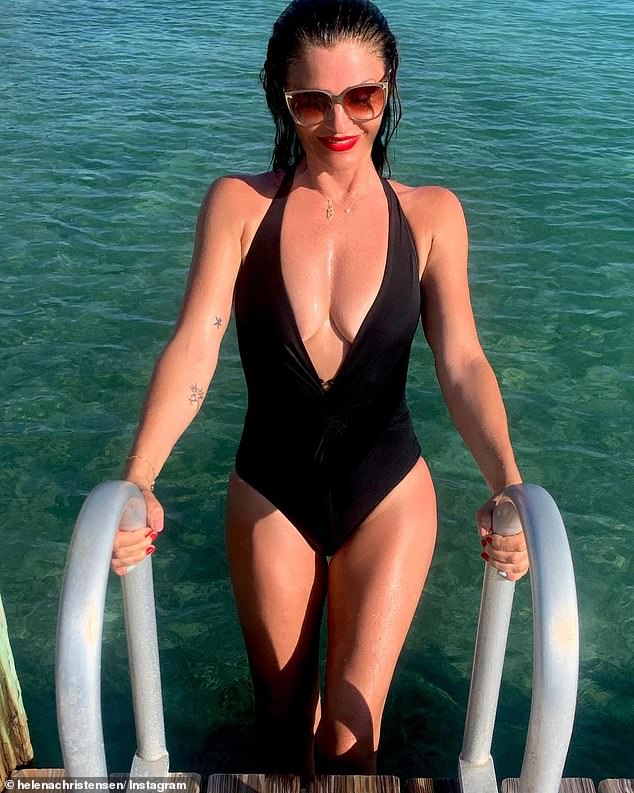 Former supermodel Helena Christensen, 52, shared a new photo of herself replicating one taken for a Chanel advert in 1990 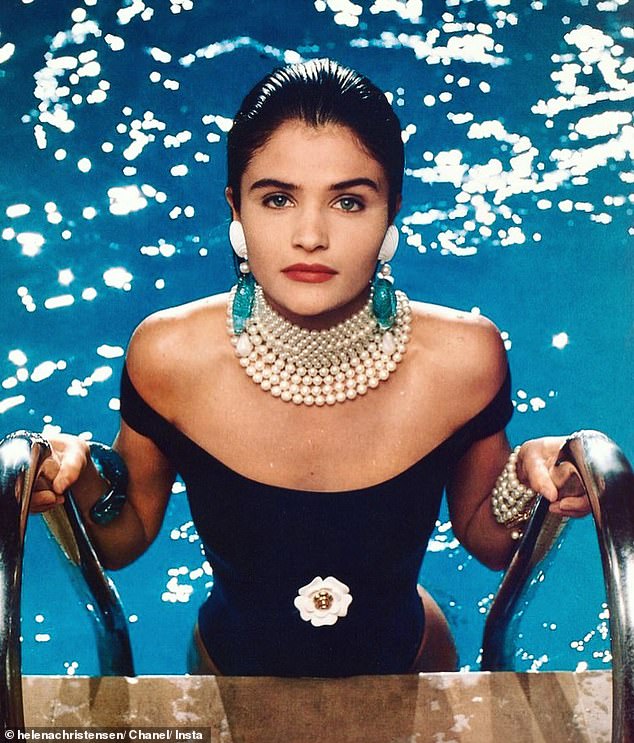 ‘My, she looks so good you’d be forgiven for thinking she had been airbrushed’

These useful tips for women of a certain age come from former supermodel Helena Christensen, 52, who shares a new photo of herself replicating one taken for a Chanel advert in 1990.

My, she looks so good you’d be forgiven for thinking she had been airbrushed.

Having remortgaged his home to keep the show on the road, Andrew Lloyd Webber vows the July 14 West-End debut of his musical Cinderella will go ahead even if the Government delays lifting restrictions — and even if it means he is arrested.

Good on him! We should all support our great theatrical maestro and demand — whatever the prevaricating Government does — that, like Cinderella, we shall go to the ball.

After cricketer Ollie Robinson was suspended for offensive tweets made when he was a teenager, we learn that our most decorated bowler Jimmy Anderson and five others are also under investigation.

Lords alive, at this rate, we won’t have an England team left.