Texas Governor Greg Abbott has announced plans for the state to build its own wall along its southern border with Mexico.

The Republican made the announcement during a press conference at the ‘Border Security Summit’ in Del Rio, and said he would discuss the plan further next week.

‘We have to build a border [wall]. I’ve been down here talking to the people in the Rio Grande Valley and the way they are being overrun is reprehensible,’ Abbott told Fox News on Thursday night. ‘It’s disastrous what the Biden administration has done.’

In his first month in office, President Joe Biden paused construction of the border wall between the U.S. and Mexico – a key policy of his predecessor, Donald Trump.

But as the number of illegal immigrants at the southern border reaches 20-year highs, the decision to pause construction has been criticized by many Republicans.

The governor also said during the TV appearance under a new disaster declaration, anyone caught in Texas having crossed the border illegally faces arrest and jail time. 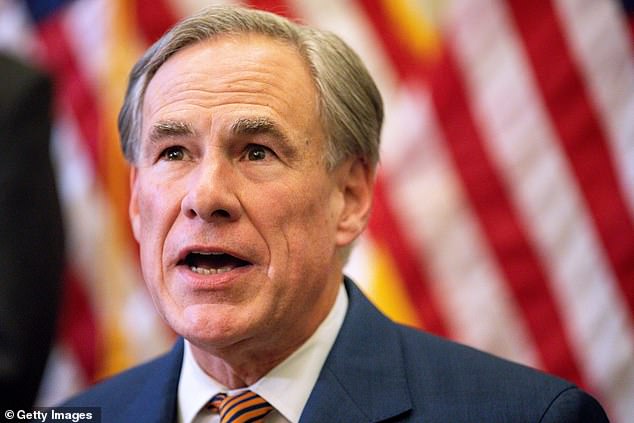 ‘President Trump had adequately secured our border. He had the ‘Remain in Mexico’ policy and began building the border wall and now suddenly all of that disappeared and … it has led to a dramatic increase in the number of people coming across the border,’ Abbott continued .

‘But it’s not just unaccompanied minors, it’s people who are causing great damage and harm to the residents right here in Del Rio as well as up and down the entire border.’

Abbott issued a disaster declaration for 34 counties along or near Texas’ border with Mexico earlier this month.

For his reasoning, he cited Biden’s ‘open-border policies [that] have paved the way for dangerous gangs and cartels, human traffickers, and deadly drugs like fentanyl to pour into our communities.’ 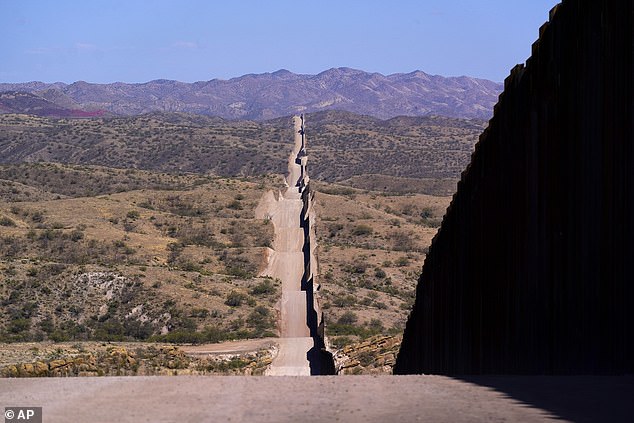 Abbott made the announcement during a press conference at the ‘Border Security Summit’ in Del Rio, and said he would discuss the plan to build the wall further next week. Pictured: new border wall stretches along the landscape near Sasabe, Arizona, on Wednesday, May 19, 2021

‘They’ve laughed it off, just in the exact same way that the vice president laughed it off in her interview the other day, and so it is a joke to the Biden administration.’

‘They completely don’t care about the border at all, and they try to brush it aside as much as they possibly can,’ the governor claimed.

‘They ignore it. They haven’t come here, they haven’t talked to us, they don’t want to do anything for us. They’re fighting us every step of the way.’

Abbott also revealed other initiatives, including $1 billion towards border security in the state budget, which he said was ‘a good start’.

Abbott also announced the formation of a ‘Governor’s Task Force on Border and Homeland Security’, which will consist of representatives from agencies from eight states.

Furthermore, Abbott said that he and fellow-GOP Governor Doug Ducey of Arizona would ask other states to send law enforcement officials in order to ‘to assist in making arrests and jailing’ of illegal migrants. 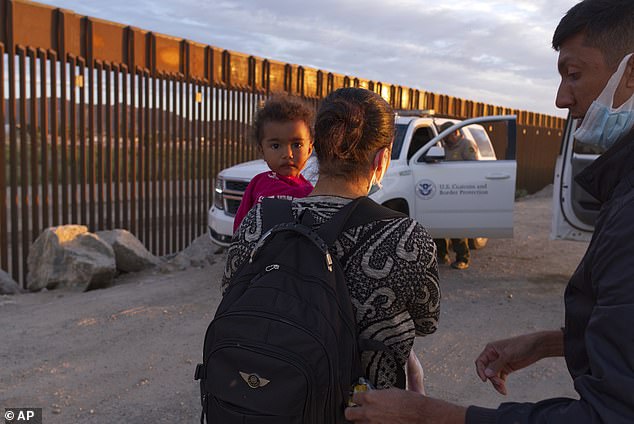 In his first month in office, President Joe Biden paused construction of the border wall between the U.S. and Mexico – a key policy of his predecessor, Donald Trump. Pictured: A migrant family from Brazil waits to be processed by U.S. Border Patrol agents after passing through a gap in the border wall from Mexico in Yuma, Ariz., Thursday, June 10, 2021

By the end of Trump’s presidency, the administration claimed to have completed more than 400 miles of border wall since taking office in 2017.

Various types of fences covered 654 miles were already in place on the border before he took office, running through California, Arizona, New Mexico and Texas.

However, of the 452 miles Trump’s administration claimed to have completed, only 80 miles of new barriers were built where there were none before.

This included 47 miles of primary wall, and 33 miles of secondary wall to reinforce the initial barrier, according to the BBC.

Trump claimed this should be considered new wall, because it replaced what he said were ‘old and worthless barriers.’

Another cornerstone of Trump’s 2016 election campaign was that Mexico would pay for the border the wall, but the U.S. government paid for all the costs associated with building the wall after Trump used emergency powers to divert funds from the Department of Defence. 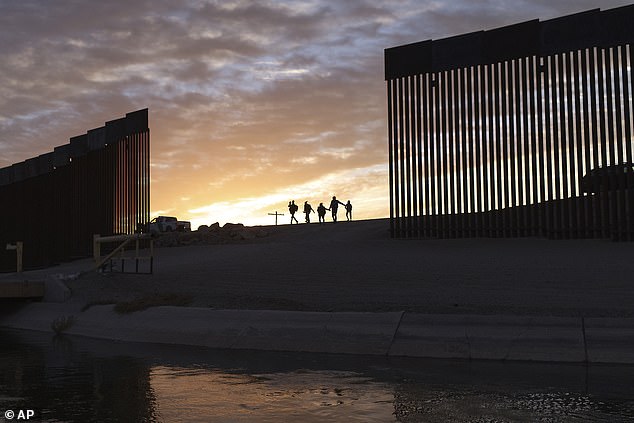 As the number of illegal immigrants at the southern border reaches 20-year highs, the decision to pause construction on the wall  has been criticized by many Republicans

Abbott’s comments came after the Biden administration threatened on Monday to pursue legal action if Texas’ governor doesn’t rescind his order shutting down federally funded shelters that house migrant children who cross the U.S.-Mexico border without their parents.

In a letter obtained by The Associated Press, the deputy general counsel for the U.S. Department of Health and Human Services told the Republican governor that even though the state issues the licenses for the shelter, Congress has tasked his agency with caring for unaccompanied children.

He warned Abbott not to interfere with those operations and said HHS intends to pursue legal action if the state proceeds to close the shelters down.

‘(The Office of Refugee Resettlement) operates 52 state-licensed facilities in Texas, which comprise a significant portion of ORR’s total operational footprint, and represent an indispensable component of the federal immigration system,’ Paul Rodriguez, HHS deputy general counsel, wrote in the letter two Abbott and two other Texas officials. The ‘proclamation would be a direct attack on this system.’

The letter urges Abbott to clarify by June 11 whether his proclamation last week applies to 52 shelters that are licensed by the state but funded with federal grants. It argues that federal law states these migrant children ‘do not accrue unlawful presence’ while they are in the United States, challenging Abbott’s labeling of these children as ‘unlawful immigrants.’

More than half of migrant children sheltered by the U.S. government in licensed facilities are in Texas. The last census taken on May 19 showed 4,223 children in the facilities of about 7,000 in the entire network of licensed shelters. 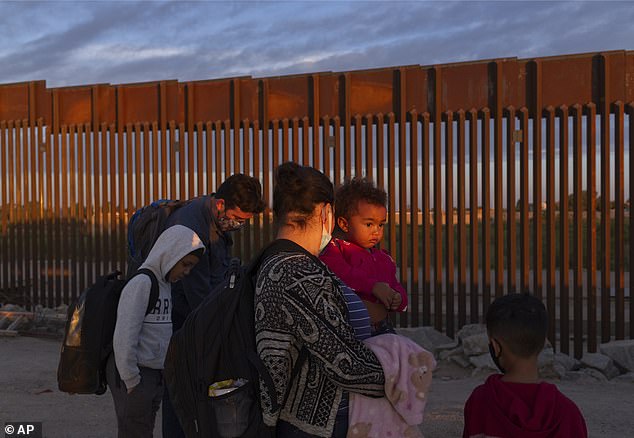 Abbott issued a disaster declaration for 34 counties along or near Texas’ border with Mexico earlier this month. For his reasoning, he cited Biden’s ‘open-border policies [that] have paved the way for dangerous gangs and cartels, human traffickers, and deadly drugs like fentanyl to pour into our communities’

Experts and advocates say shutting down these shelters could seriously disrupt the program for unaccompanied children, which already faces capacity problems forcing the government to open up a dozen emergency sites to process thousands of children.

The Biden administration has worked to speed up the transfers from Border Patrol to HHS custody, and the releases of children to relatives in the U.S. In the past month, HHS has reduced the number of children in shelters or emergency sites by releasing more of them to their families.

However, as of Sunday, there are still about 16,000 children in HHS custody, and the federal government has struggled to increase the number of beds in licensed shelters, which are preferred by advocates.

The so-called emergency intake sites were opened beginning in March at convention centers, military bases and other large venues. They look like hurricane evacuation shelters, with little space to play and no privacy. Advocates and lawmakers who have visited have voiced concerns about the children’s mental health.

Abbott also has been critical of emergency facilities that lack state licenses, but advocates say his directive could transfer more children to the large-scale sites.

The letter says the state would be discriminating against providers who have federal government grants to run these shelters. That would violate the doctrine of intergovernmental immunity, which impedes state interfering with federal activity, and the Supremacy Clause, which says federal law takes precedence over state or local laws.

The order to strip away licenses from shelters is part of a disaster declaration Abbott issued last week, arguing the federal government can’t force Texas to keep issuing state licenses in response to a federal problem. The proclamation was a highly unusual move by the governor that comes amid criticism of record numbers of border crossings in recent months.

More recently, Abbott is saying that state troopers will soon begin arresting migrants at the border, promising an announcement later this week.