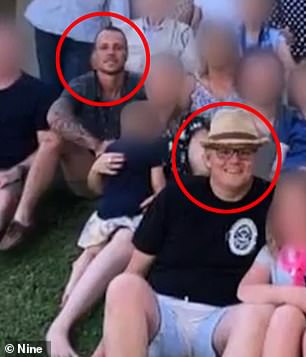 Uncle ScoMo: Prime Minister Scott Morrison and his nephew by marriage Mitchell James Cole during a Christmas shindig at Kirribilli House in 2018

Prime Minister Scott Morrison’s ‘dodgy tradie’ nephew has been threatened with arrest after a court no-show and could face three years’ jail and a $500,000 fine if found guilty of wrongdoing.

It comes as Mitchell James Cole’s texts to one of his clients can be revealed which show the well-connected builder offering a series of excuses for failing to turn up to work involving a fallen tree, a funeral, an infection and his grandmother’s house.

Cole, 29, who is now based in Hazelbrook in the Blue Mountains, failed to appear in front of Magistrate Peter Feather on Friday over 20 charges brought by NSW Fair Trading.

The charges relate to renovation works Cole performed for four different clients in Sydney’s south through 2018 and 2019.

The alleged offences include working as a builder without a license or insurance, and accepting payment without supplying goods for the second time – the charge carrying the most hefty penalty.

A representative for NSW Fair Trading told Parramatta Local Court that Cole had claimed that he had a lawyer, but refused to say who. His alleged solicitor likewise failed to show up.

Magistrate Feather warned that ‘it’s likely a warrant will be issued for (Cole’s) arrest’ if he fails to turn up again when the case returns to court on June 25. 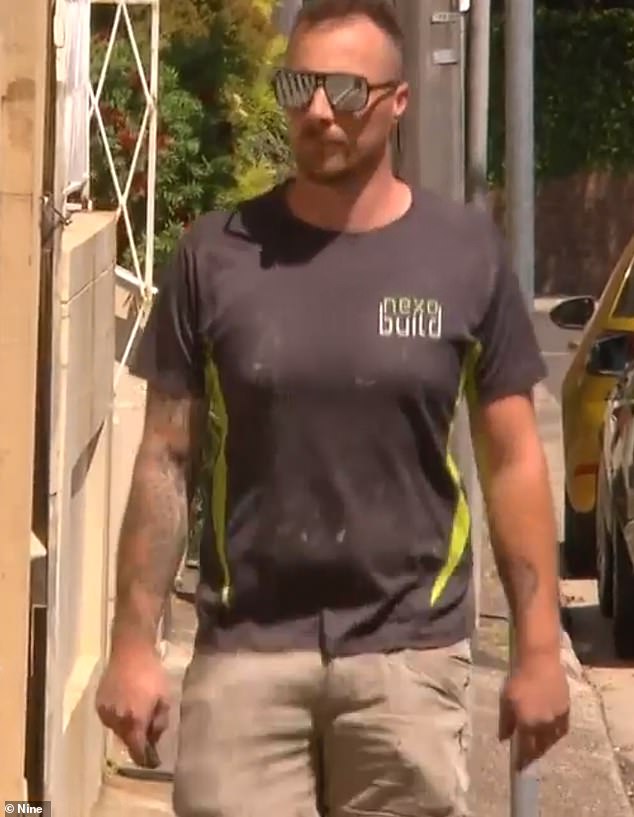 Builder Mr Cole has been charged with 20 offences but failed to show his face in Parramatta Local Court on Friday, despite widespread publicity

Menai father-of-two James McCall is one of the alleged victims who Cole has been charged over.

Mr McCall paid Cole about $23,000 to tile his pool and erect some fencing but claims the PM’s relative rarely showed up. Meanwhile, he alleged the work that was completed was riddled with issues.

Mr McCall shared a series of messages with Daily Mail Australia where Cole repeatedly offered up excuses for why he or his people couldn’t attend the worksite.

On July 1, 2019, McCall asked Cole what time the tilers were expected to come around.

Almost 24 hours later, Cole replied: ‘Hey mate sorry I’ve just flown in from Queensland I had a funeral for a mate. I’ll chase him up.’

On the morning of July 25, Cole was struck down by further misfortune, after being asked about delivery materials.

‘I’m just going doctors an (sic) trying to get over I’ve had this bad virus yesterday and today. Spoke to delivery driver he’s going to place materials near fence.’

Mr McCall wrote to Cole that evening, saying nothing had been dropped off by anyone.

And days later, he asked if Cole was going to be around that week.

Cole said: ‘Hey mate sorry didn’t get back to you. I had a blood infection. I’ve got 2 more tests tomorrow then I should be good by then.’

Weeks later, on August 9, Mr McCall texted to say he still hadn’t heard from a tiler as promised.

Cole said: ‘Hey bro just letting you know I had to leave last night an go to my mums as a tree fell down last night. Me an my cousin will be leaving shortly to come back.’

Mr McCall texted Cole almost daily to check in if ‘everything’s alright’. About 8am on August 16, he asked the tradesman: ‘Hi mate are you around today?’

Cole replied: ‘Hey mate, I’ll be around tomorrow I’ve had a couple of dramas with myself and only got back to my nan’s I’ll call back shortly.’

Mr McCall still had to text him the next day to ask if he was still coming to the property.

In late July 2019, Cole claimed he  had a ‘virus’, then a ‘blood infection’ to Mr McCall – but would be ‘good’ the next day after a couple of tests 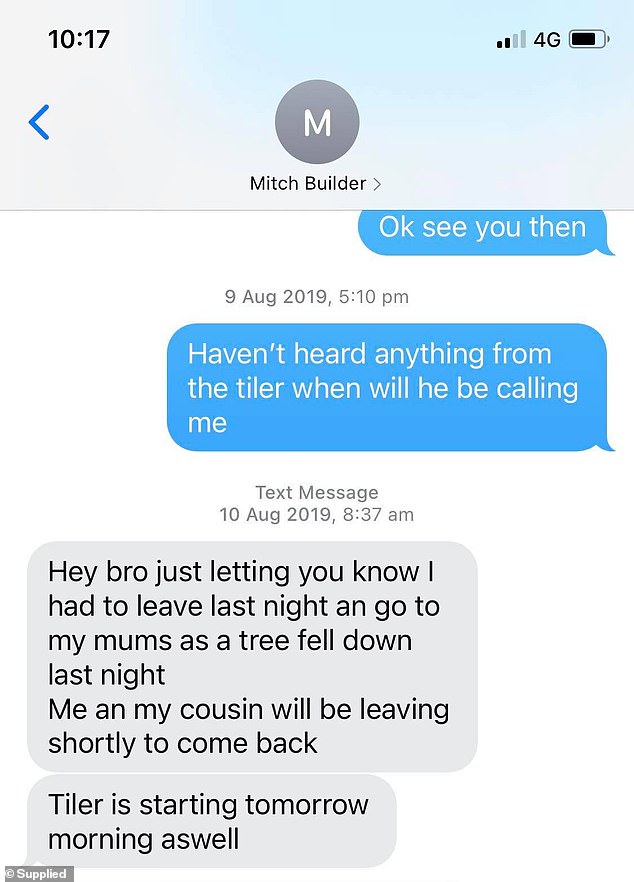 On August 10, Cole told McCall a tree had fallen, and that was why he had to leave the worksite

‘I’ve had a couple of dramas with myself,’ Cole told McCall on August 16

Daily Mail Australia has previously printed a separate series of excuses that Cole offered to a separate client for alleged on-site no shows in September 2018.

Those excuses included being in hospital because of an acute episode of ‘stress’ and bleeding from his backside.

The woman, who requested anonymity, said: ‘Each day he said he would either come to fix it or continue work or said he had actually been at my place (I was at work).

‘He never went or did any of the things he said in the messages that he was doing. All lies.’ 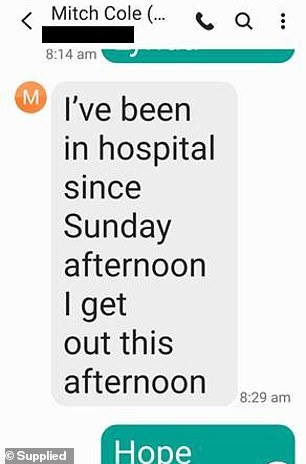 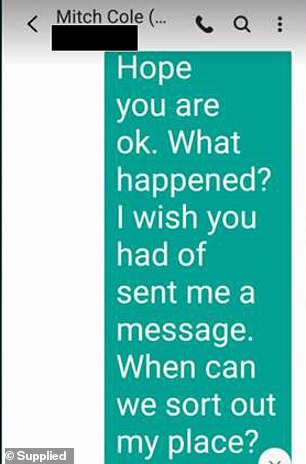 In September 2018, Mitchell Cole told a client he hadn’t been working as ‘I’ve been in hospital since Sunday afternoon’. Mr Cole claimed that he’d been suffering stress and bleeding from his backside

The regular excuses didn’t stop Cole from bragging about his ties to the nation’s leader.

The tradesman is the son of Cecily Cole, Jenny Morrison’s sister, and is therefore Mr Morrison’s nephew by marriage.

Mr McCall said after getting in touch via a Sutherland Shire Facebook group, Cole first came out to his home and ‘genuinely came across like he knew what he was doing.

‘He was reasonably priced. He had all the gear – he looked legit.’

Mr Cole has been operating under a series of business names over the past few years, including Nexo Build 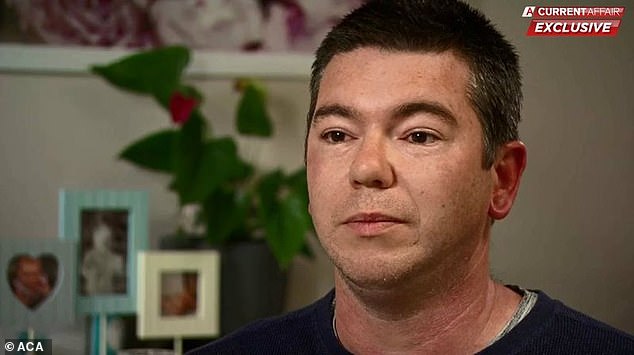 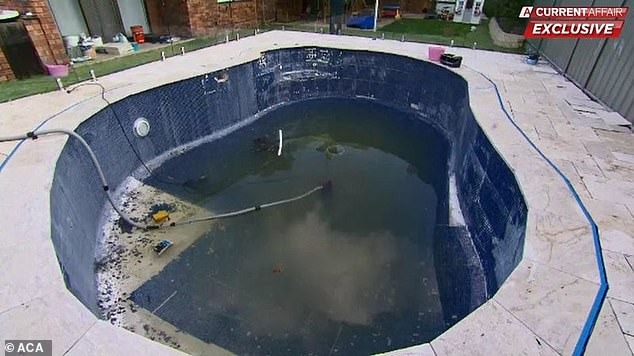 Mr McCall said he handed $23,000 over for work on his pool plus fencing

He then boasted of being related to the nation’s leader, showing photographs of himself at Kirribilli House in Christmas 2018, barely a metre away from the Prime Minister and his wife.

Mr Morrison has previously said he was ‘deeply concerned’ about allegations against his nephew.

‘Mitchell is my nephew by marriage and as a result occasionally attends family events,’ he said.

‘However, that is the extent of contact I have with Mitchell.  Mitchell, like anyone else, should be held fully accountable for any of his actions.’

Cole has previously been convicted of six counts of doing building work unlicensed and fined $60,000.