A Moscow court declared his political party ‘extremist’ and banned groups founded by the activist, pictured, in the latest move to silence opponents of Russian president Vladimir Putin.

The ‘extremism’ label also carries lengthy prison terms for those who have worked with the organisations, donated to them or even simply shared the groups’ materials. 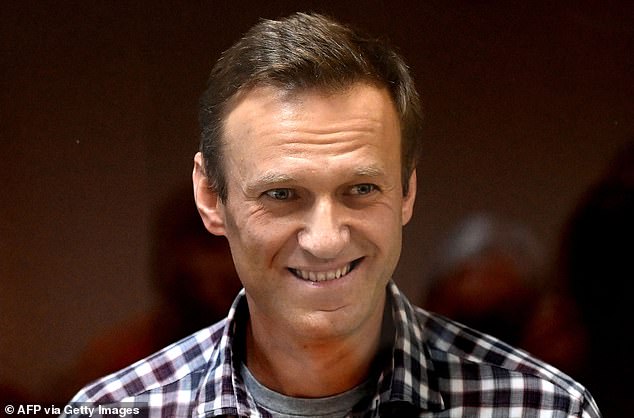 Amid condemnation over the court ruling from Foreign Secretary Dominic Raab, the EU and the US, the Kremlin said Washington was quick to comment because the jailed critic was in fact working for them.

Navalny was arrested in January upon returning from Germany where he spent months recovering from a nerve agent assassination attempt. He was jailed for violating his parole while in hospital.

The US State Department has called the extremist label ‘particularly disturbing’ and said it was part of a pattern of restricting fundamental rights in Russia.

In a radio interview, Russian Foreign Ministry spokeswoman Maria Zakharova said the response showed the extent of US interference in Russia’s affairs.

‘Can you imagine seeing such an instant reaction from the State Department to a domestic or some other internal decision in another country?’ she said in the interview broadcast on YouTube and state radio.

‘Then in a few hours they make a special statement. This means that they are politically involved in the story,’ she said, adding that Washington was thus exposing its ‘agents’. 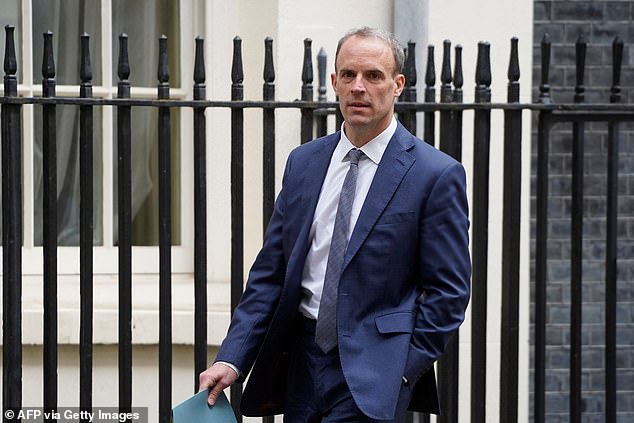 Amid condemnation over the court ruling from Foreign Secretary Dominic Raab (pictured), the EU and the US, the Kremlin said Washington was quick to comment because the jailed critic was in fact working for them

In February, Navalny was given a two and a half-year prison term for violating the terms of a suspended sentence from a 2014 embezzlement conviction that has been widely dismissed as politically motivated.

‘The ruling by a Moscow Court to label Mr Navalny’s organisations as “extremist groups” marks the most serious effort to date by the Russian Government to suppress the independent political opposition,’ EU foreign policy chief Josep Borrell said yesterday.

Mr Raab added: ‘The ruling that the anti-corruption foundation FBK is an extremist organisation is perverse.

‘It is another Kafka-esque attack on those standing up against corruption and for open societies, and is a deliberate attempt effectively outlaw genuine political opposition in Russia.’