The gunman who fatally shot a grandmother and her one-year-old grandson inside a Florida supermarket before killing himself has been identified, but the motive behind the attack remains a mystery, according to authorities.

‘There is no known relationship between the gunman and the victims, however, detectives are still investigating,’ Barbera said hours later. Timothy J. Wall, 55, of Royal Palm Beach, is suspected of using a handgun to shoot the grandmother and child Thursday morning 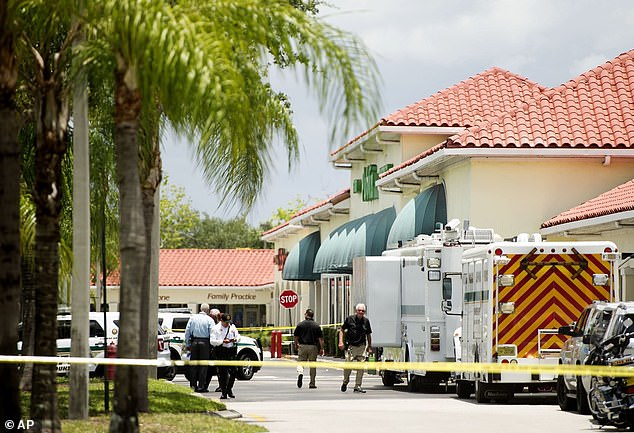 A man shot and killed a woman and a toddler inside a Florida supermarket on Thursday morning before turning the gun on himself, according to authorities 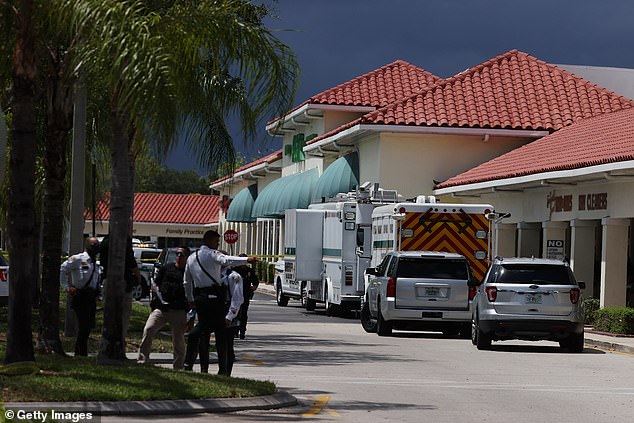 The Palm Beach Sheriff’s Office sent deputies at 11:40am to the Publix store on Royal Palm Beach Boulevard

Bystander photo shows an armed officer outside the site of the deadly shooting in Palm Beach, Florida, on Thursday, in the immediate aftermath

Deputies were called to the Publix store on Royal Palm Beach Boulevard at 11:40am after reports that at least three shots were fired.

They found three people – a man, woman and child – dead from gunshot wounds. The sheriff’s office said the gunman was among the deceased.

The toddler’s father was called to the scene to identify his son, reported WPLG. He would have turned two later this month.

The grandmother had been shopping with him inside the store at the time. The sheriff’s office initially said it is ‘possible’ the gunman and the victims ‘knew each other’, but no connection has been released. 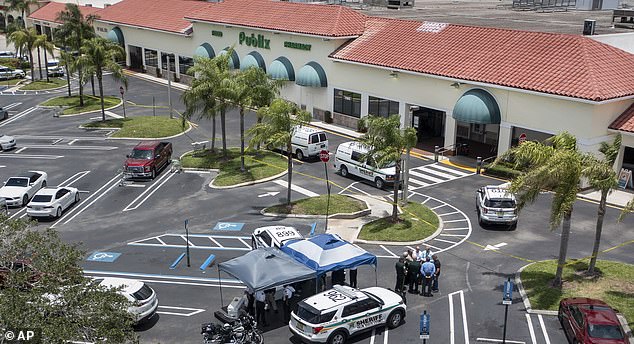 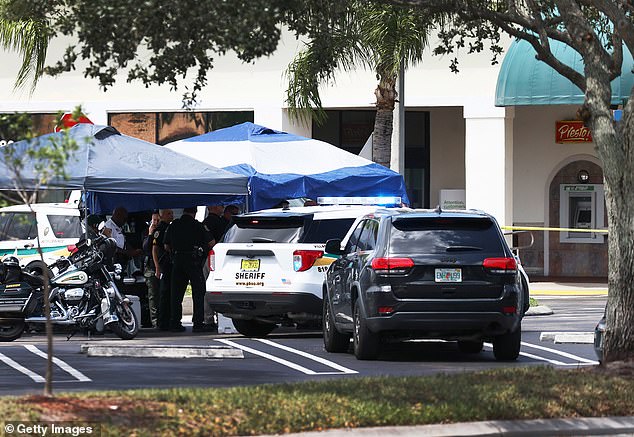 Palm Beach County Sheriff’s officers stand outside of a Publix supermarket where a woman, child and a man were found shot to death

At a press conference Thursday afternoon, officials said they were reviewing surveillance footage and speaking to witnesses as part of the investigation.

There are no plans to release that surveillance footage at the moment, authorities said. Three people – a man, woman and child – were found dead from gunshot wounds inside

There are no plans to release the names of the victims either, as the sheriff said the family has invoked Marsy’s Law.

The state-by-state law is designed to protect the families of crime victims. There are multiple tenets of the law, including a right to freedom from intimidation, harassment or abuse.

The amendment adding the law in Florida was approved by more than 61 percent of voters during in 2018.

The law was named for Marsy Nicholas, who was murdered by her ex-boyfriend in 1983.

One week later, her brother and mother encountered the ex-boyfriend at a grocery store following his bail release, which they didn’t know about. 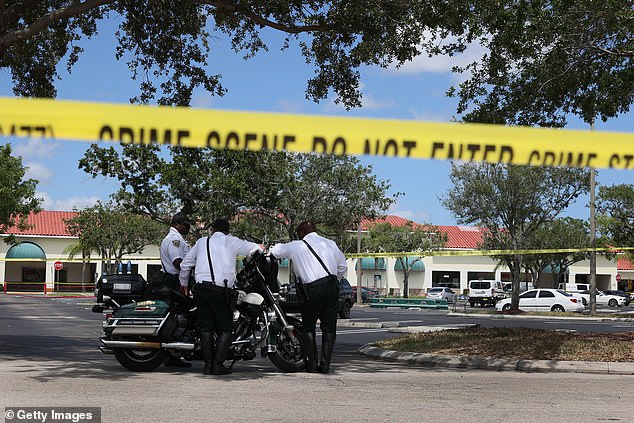 Officers stand outside the store. Officials are trying to determine if there was a relationship between the male shooter and his two victims, but none has been found 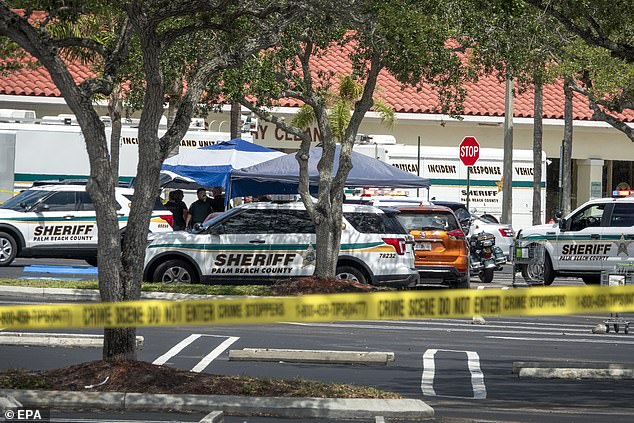 Juan Guardia told the Palm Beach Post he was near the deli when the shooting happened in the produce aisle.

‘I heard, “They’re shooting!” A woman Publix worker said, “Run! Shooting!”‘ Guardia said. ‘I was scared. It’s sad because everything happened fast. Everyone was running, some employees were crying.’

Ron Glassman, a stress management consultant, had just parked his car and was heading to another store when about 50 customers and employees ran out of the Publix yelling, ‘There’s a shooter, there’s a shooter. Don’t go in there.’

‘It was pretty chaotic. People were very shaken,’ Glassman said. 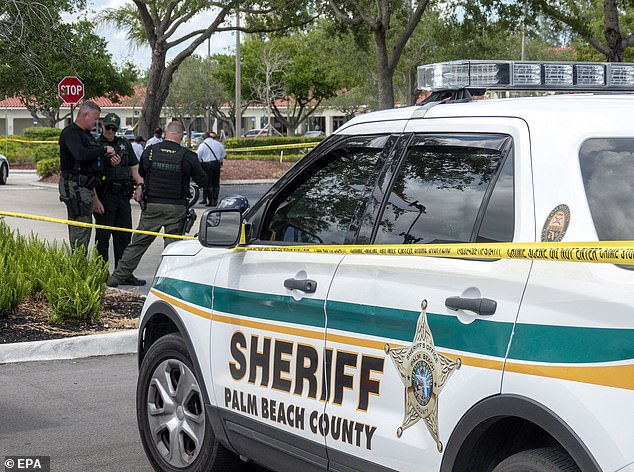 The sheriff’s office said it is ‘possible’ the gunman and the victims ‘knew each other’ but provided no further details about the potential relationship, with none currently found 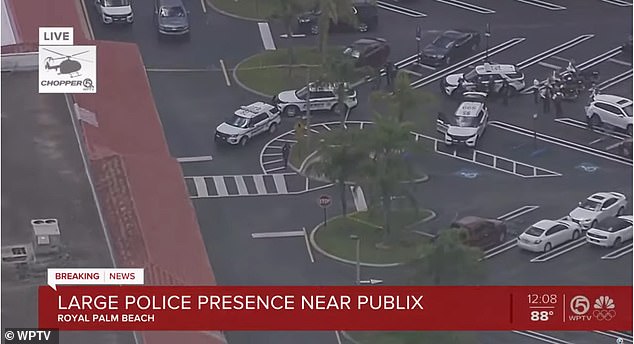 Customer Lynn Waterman told the Sun-Sentinel she was at a cash register when she heard what she initially mistook for the sound of popping balloons.

Suddenly, Waterman said the cashier announced there was a shooter and took off.

A witness at a bank nearby told WPBT he saw a stampede fleeing from the Publix. Timothy J. Wall, 55 is suspected of using a handgun to shoot the grandmother and child before he turned the gun on himself. The victims won’t be identified publicly

Publix spokeswoman Maria Brous said in a statement that the company was working with law enforcement.

‘Our thoughts are with those who are impacted by this tragedy. We are cooperating with the local law enforcement,’ she said.

‘Since this is an active police investigation, we cannot confirm any additional details.’

The sheriff’s office later stated that the store location would remain closed on Friday. Customers who left items at the store have a three-hour window to pick them up by noon on Friday.

DailyMail.com has reached out to the Palm Beach County Sheriff’s Office for more information.

Royal Palm Beach is a middle-class suburb home to around 40,000 people.