Beachgoers have crowded onto the sandy beaches of Portugal as the country faces rising coronavirus cases and a delay in the easing of lockdown restrictions in some cities.

The Portuguese government this week announced stricter rules will remain in place in the capital Lisbon and three municipalities due a worrying rise of Covid-19 infections.

It comes after the UK government took a snap decision last week to axe Portugal from its ‘green’ travel list because of the presence of a new variant of coronavirus.

Portugal recorded a total of 910 new coronavirus cases on Thursday, which is the biggest daily figure for new cases since March 10.

Meanwhile, the UK recorded another 7,393 positive tests in the biggest week-on-week spike since February, as the Indian Covid variant continues to spiral.

Holidaymakers packed onto Santo Amaro beach near Lisbon on Thursday to enjoy the scorching temperatures despite rising infection rates.

But it comes as the capital, alongside Braga and Vale de Cambra in the north and Odemira in the south, will not move to the next stage of lockdown easing on Monday and will keep their stricter measures in place until at least June 27. 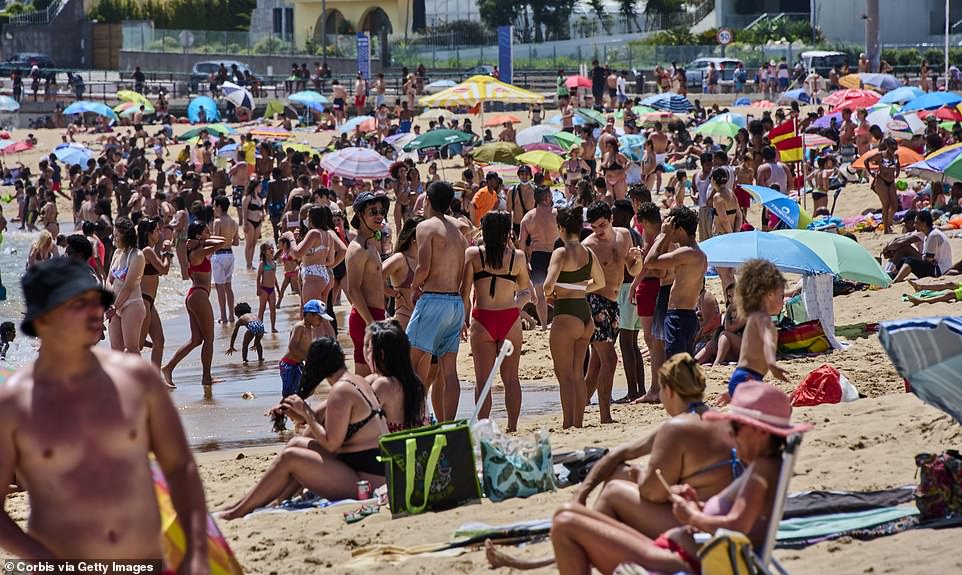 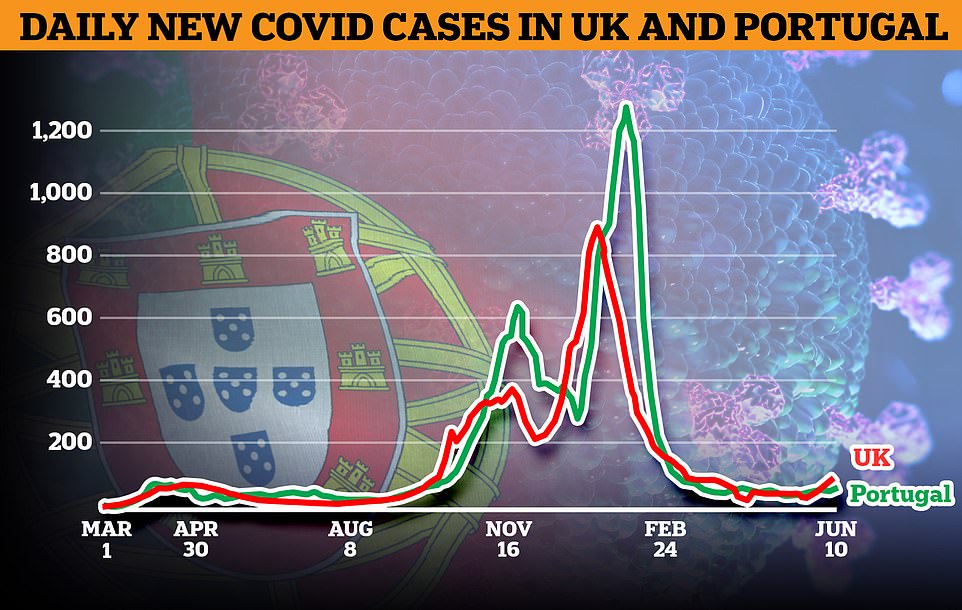 Portugal recorded a total of 910 new coronavirus cases on Thursday, which is the biggest daily figure for new cases since March 10. Meanwhile, the UK recorded another 7,393 positive tests in the biggest week-on-week spike since February, as the Indian Covid variant continues to spiral 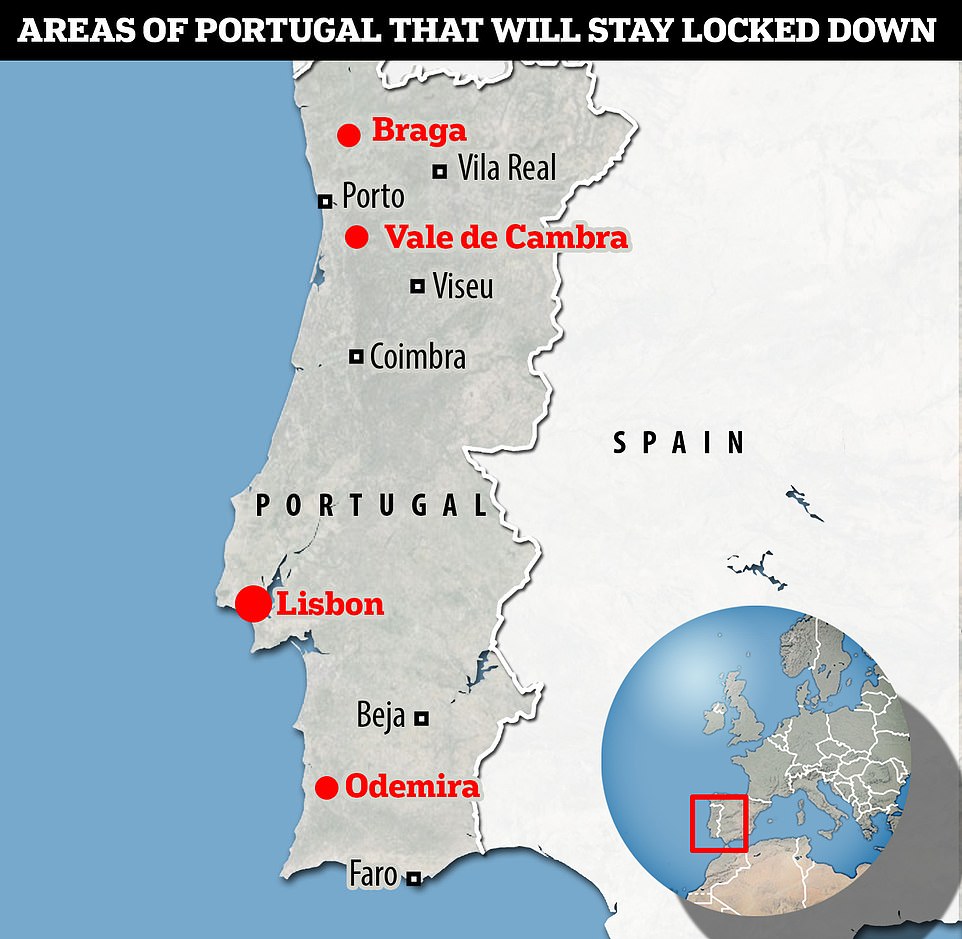 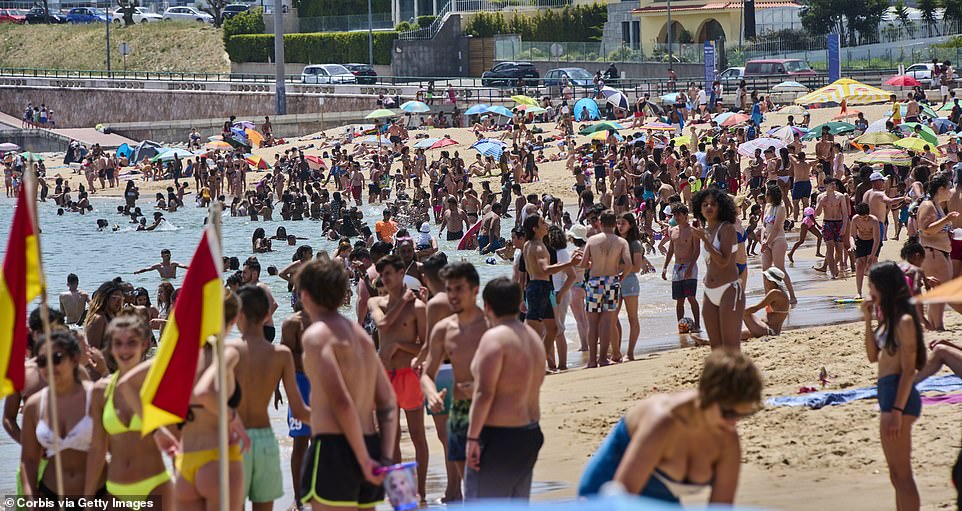 In these areas, restaurants and cafes will have to close at 10.30 pm, while in the rest of the country they will be able to stay open until 1 am.

Working from home will also remain obligatory where possible whereas for the rest of the country it will only be recommended after June 14.

‘The situation of these municipalities does not allow us to continue deconfinement,’ said government spokeswoman Mariana Vieira da Silva after ministers met and made the decisions, stressing that the number of Covid-19 cases had increased in Lisbon, especially among younger people.

Portugal imposed a nationwide lockdown in January to tackle what then was the world’s worst coronavirus surge, but restrictions have been gradually lifted since mid-March and most businesses have already opened.

For the rest of the country the easing of lockdown restrictions will continue according to plans set out by the government at the start of the month.

Under these plans a range of activities will once again be allowed, including a return of the public to sports arenas, though only up to a third of a venue’s capacity. 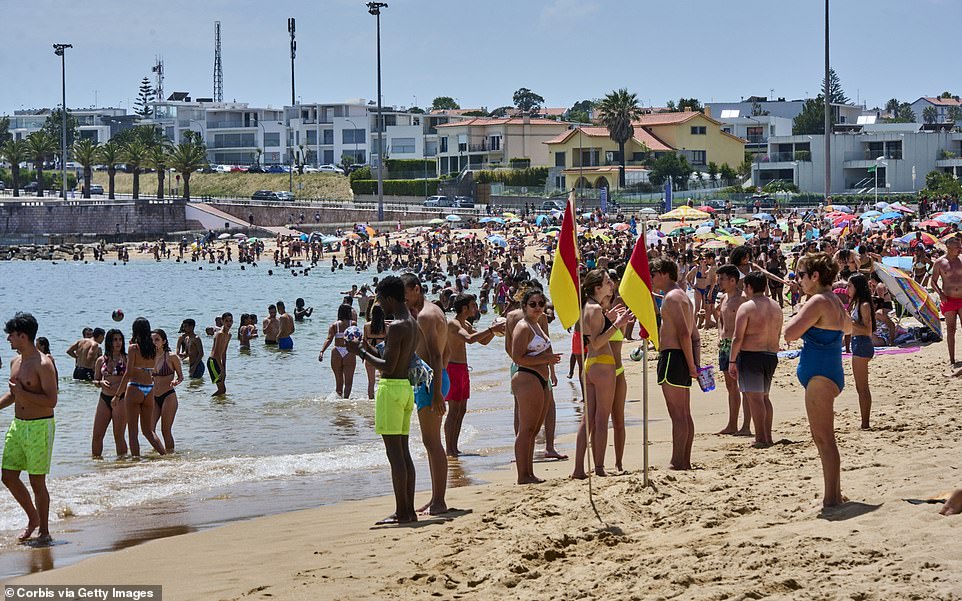 But it comes as the Lisbon, alongside Braga and Vale de Cambra in the north and Odemira in the south, will not move to the next stage of lockdown easing on Monday and will keep their stricter measures in place until at least June 27. Pictured: Beachgoers crowd Santo Amaro beach near Lisbon on Thursday 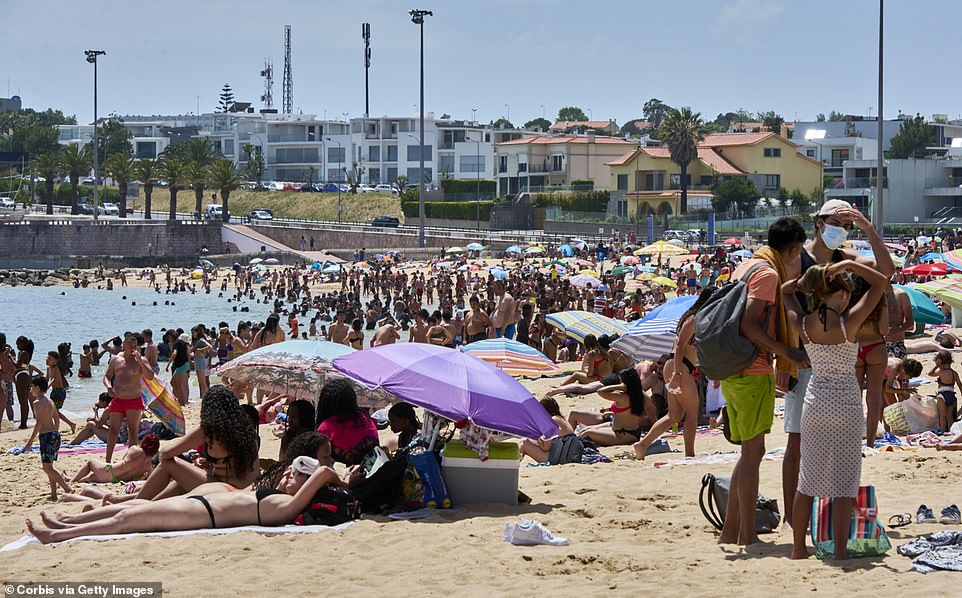 The government on Wednesday also announced compulsory Covid-19 tests for companies with more than 150 employees, and for certain public gatherings.

Hit by a strong wave of the coronavirus over the winter, Portugal introduced strict confinement measures from mid-January to mid-March before beginning the gradual easing of the safety measures.

Under the scheme, bars and nightclubs will remain closed until late August.

A country of just over 10 million, Portugal has reported a total of 855,432 infections since the pandemic started and 17,043 deaths.

A total of 910 new coronavirus cases were registered in Portugal on Thursday and six deaths.

This is the biggest daily figure for new cases in the country of 10 million residents since March 15.

Most new cases were concentrated in and around Lisbon.

‘The situation in the Lisbon area is worrying,’ Cabinet Minister Mariana Vieira da Silva told a news conference. ‘We are having difficulties in reducing cases.’ 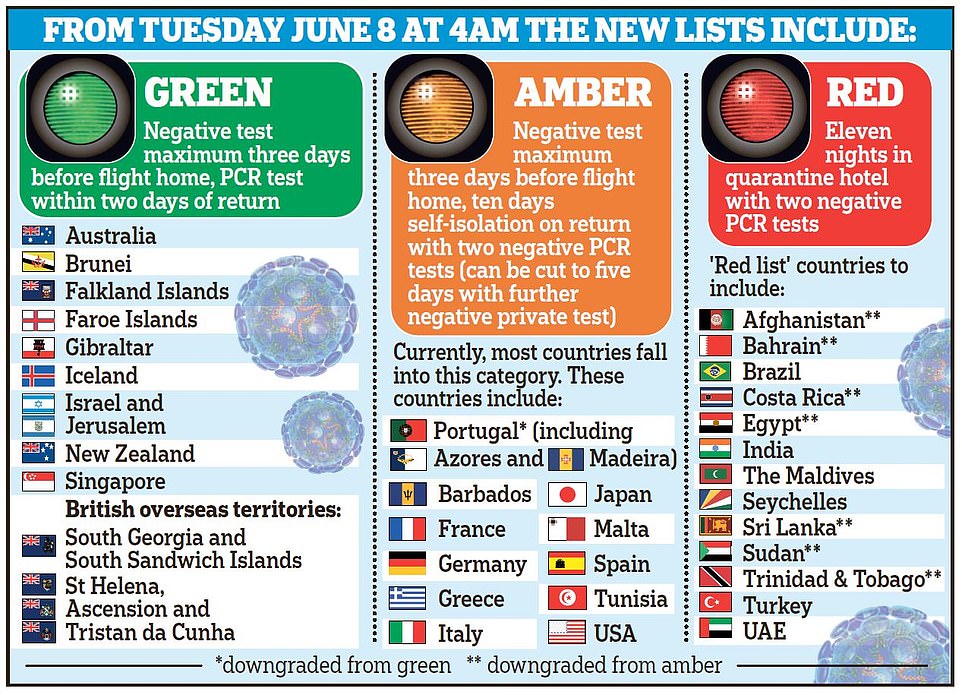 It comes after the UK government took snap decision last week to remove Portugal from its ‘green’ travel list because of the presence of a new variant of Covid.

This ‘Nepal variant’ is believed to be a freshly-mutated version of the Indian variant, which is already in Britain and causing cases to spike.

‘Amber’ rules mean travellers arriving home from Portugal today will have to self-isolate for 10 days and pay for two PCR tests to take on day 2 and day 8.

Breaking quarantine could lead to a £10,000 fine while those who do not take tests on day 2 and day 8 of their self-isolation facing £2,000 penalties.

And those who provide incorrect information on their passenger locator forms could be fined £10,000 or be jailed for 10 years – or both.

Meanwhile George Eustice, the environment secretary, has told Britons they should avoid all foreign travel this year to prevent themselves getting caught out.

Travel bosses have angrily denounced the sudden rule-change, saying ministers risk a jobs bloodbath in a sector that has already spent a year struggling to get by.

Britons have been left stranded overseas while others area facing bills of thousands of pounds as they scrambled to get home before the new quarantine rules came into force.

And Portuguese politicians have described the decision as ‘unfathomable’, lamenting the loss of valuable tourist income from Britons – who are typically one of the biggest groups to visit the country, and currently one of the most-vaccinated populations in Europe.

‘We take note of the British decision to remove Portugal from the travel ‘green list’, a decision whose logic is unfathomable,’ the foreign ministry said last week.

‘Portugal continues to carry out its prudent and gradual deconfinement plan, with clear rules for the safety of those who live here or visit us.’

Elidérico Viegas, president of the Algarve Hotel and Tourism Business Association, said the region has been forced to pay the price for cases rises in capital Lisbon.

‘It’s unfair because the Algarve is being caught in the middle of all this because case numbers in the region are lower than the minimum considered safe,’ he said.

Britain is due to review the ‘green’ countries in three weeks’ time, with Viegas saying he hopes Portugal will be re-added to the list.

Portugal is currently seeing Covid cases rise as the country exits lockdown, but is still recording fewer cases each day than the UK.

Many holidaymakers and travel firms expressed anger when the announcement on Portugal was made last Thursday, as it came just 17 days after the ban on international leisure travel was lifted.

Alan and Lisa Pechey, from Cambridge, who were on holiday in Lisbon, paid a total of £800 to fly back to Gatwick on Monday, earlier than planned.

Mrs Pechey, 66, told the PA news agency: ‘It was really expensive and I think the Government was totally unfair to throw that at us on Thursday because it really spoiled our holiday, totally.

‘We had flown out on Monday for a relaxing break, but from Thursday onwards we were under extreme stress.’

Ana Pacheco, 28, from Islington, north London, who was on holiday near Porto, paid £300 for her flight home.

She said: ‘I lost money on this trip, about £300 extra, because I was due to come back tomorrow evening, so it is quite annoying.

Marcus Gardner, 26, from Battersea, south London, who flew to Gatwick from Porto, said: ‘Our flight was much busier than before – going there only a few people were on the plane but coming back it was full capacity.

‘A lot of people were rushing to get home and at the airport there were loads of people waiting for a flight.’

Rory Boland, editor of consumer magazine Which? Travel, said: ‘Passengers trying to leave Portugal before quarantine requirements come into effect will be wondering why more notice wasn’t given, such as making use of the green watch list, to prevent tens of thousands of people now scrambling to get home.

‘Between flights selling out, expensive fares, and difficulties obtaining tests in time, it’s clear the Government’s current approach to managing the changing situation around travel is flawed.

‘These issues must be addressed before the next green list review, to prevent another disastrous summer for travel.’

The Department for Transport said the situation in Portugal ‘required swift action to protect the gains made with the vaccine rollout’.

It stated that the positivity rate for coronavirus tests in Portugal had nearly doubled since the travel lists were first created four weeks earlier.

The DfT added that 68 cases of the Indian mutation, which is also known as the Delta variant, have been identified in Portugal.

Separate Test and Trace figures show 200 arrivals from Portugal were tested between May 6 and May 19.

Three of those people tested positive for coronavirus.