A 65-year-old woman has been arrested on suspicion of murder after a man’s body was discovered in a burnt out garden shed.

Fire crews were called to reports of a shed fire at a property on Salmon Lane, in Middleton Cheney, Northamptonshire, at around 3.35pm on Wednesday.

Northamptonshire Fire and Rescue Service put out the flames before the body of a man was discovered inside.

A woman has since been arrested on suspicion of murder and remains in police custody being quizzed by detectives.

Detectives are appealing for anyone with video footage to contact the force to help them establish the cause of the shed fire which led to the man’s death. 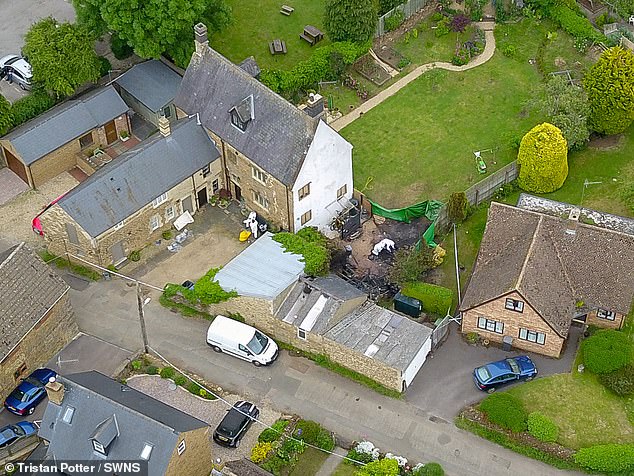 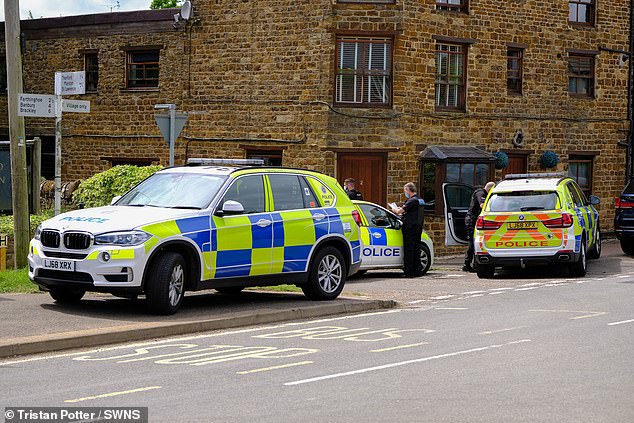 Police are pictured at the scene in Middleton Cheney in Northamptonshire

Residents living on Salmon Lane, where house prices average £460,000, said they saw large plumes of thick black smoke billowing into the sky before the victim’s body was discovered inside the burning shed.

One neighbour, who did not wish to be named, said: ‘I don’t know the people who live there as they live a bit further up the road but we saw the smoke rising into the sky.

‘I was out doing my garden and there was ever such a weird smell, it doesn’t bear thinking about that it might have been a burning body.

‘I know a few people including the landlady of the local pub called the fire brigade and they were here very quickly.

‘The next thing I know the place is swarming with police and to hear the gentleman has died is extremely sad indeed.

‘This is a nice quiet area, nothing like this has ever happened before.’

Police vehicles and fire engines remained at the scene today as officers cordoned off the street of stonewashed houses and cottages.

Armed police and forensic officers could also be seen entering the address before leaving with multiple brown boxes of evidence.

Another resident, who lives opposite the cordon, added: ‘It’s such a quiet place but there’s been so many police officers here since yesterday, it’s crazy. 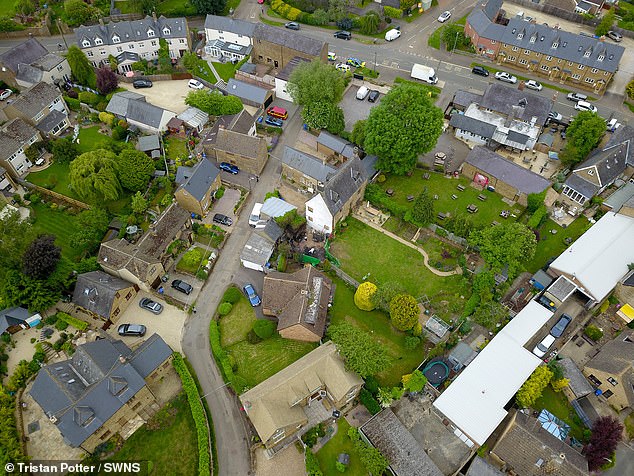 ‘All I saw yesterday was the thick smoke there was such a lot so I just closed all of my windows and doors to stop it getting in here.

‘But I know a lady who lives down the close and she’s only just come out of hospital and one of her neighbours took her in because the smoke was that bad.

‘It’s a nice quiet area too but I’ve no idea what’s happening.’

Another neighbour who lives on Royal Oak Mews, a few doors down from the close said: ‘I was out at work yesterday and returned just as all the police and fire engines turned up.

‘All I saw was smoke there was no flames just a hell of a lot of dark smoke.

‘It’s all stone houses and cottages they’re lovely but all I’ve heard is just gossip between the houses.’

Another woman, who wished to remain anonymous, added: ‘I got home yesterday to my mum’s house and was told there had been a fire.

‘And as soon as I turned up at my house there was a fire investigator van parked outside.

‘There was just so many police cars and people around but there seems to be even more people here today.

‘I know there’s a fairly older couple who live around there but it’s a nice sort of area so people retire here.

‘My mum just said they’d shut all the windows to stop getting the smoke in but there seems to be so many more officers here today then yesterday.’

East Midlands Ambulance Service said they were not required at the scene.

A police spokesperson said: ‘Northamptonshire Police has launched a major investigation following the discovery of a man’s body in a south-west Northamptonshire village.

‘At around 3.35pm yesterday, Wednesday, June 9, Northamptonshire Fire and Rescue Service was called to reports of a fire in Salmon Lane, Middleton Cheney.

‘Upon arrival they found a shed alight, and after the flames were put out the body of a man was discovered inside.

‘A 65-year-old woman was last night, June 9, arrested on suspicion of murder and remains in police custody this morning, June 10.

‘Investigations into the circumstances surrounding the man’s death are ongoing, and anyone with information is asked to call Northamptonshire Police on 101 regarding incident number 21000319651.’