‘Ring of fire’ rises over US East Coast: Spectacular images of a partial solar eclipse show the sun as a crescent as it rises over NYC, Baltimore and Philadelphia

By Emily Crane For Dailymail.com

A spectacular partial solar eclipse was visible over New York City and other parts of the US East Coast this morning as the celestial event made the sun appear as a crescent in the sky.

The partial solar eclipse was visible along parts of the East Coast shortly after 5am for roughly four minutes.

Stunning photos of the celestial event showed the solar eclipse illuminating the New York skyline as it rose over the Brooklyn and Manhattan bridges.

The crescent was clearly visible above the cities of Baltimore, Philadelphia and Washington DC.

It also made for a remarkable backdrop as it rose above seaside towns in the likes of Massachusetts and Delaware.

The event, which was livestreamed by NASA, was only visible in the Northern Hemisphere.

Those along the East Coast who were early enough managed to catch a glimpse of the partial solar eclipse, which occurs when the moon blocks about 60 to 80 percent of the sun.

An annular eclipse, which was expected in parts of the US, Canada, Europe and Asia, occurs when the sun and moon are directly in line, which causes a ‘ring of fire’ to appear in the sky. 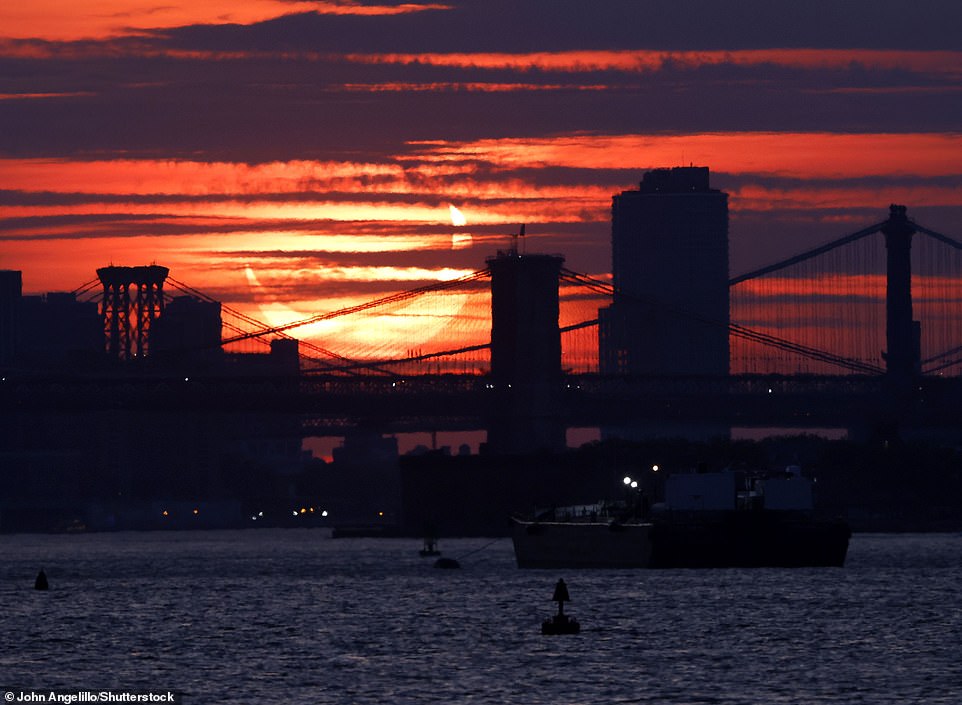 NEW YORK: The partial solar eclipse was visible over New York City and other parts of the US East Coast on Thursday morning as the celestial event made the sun appear as a crescent 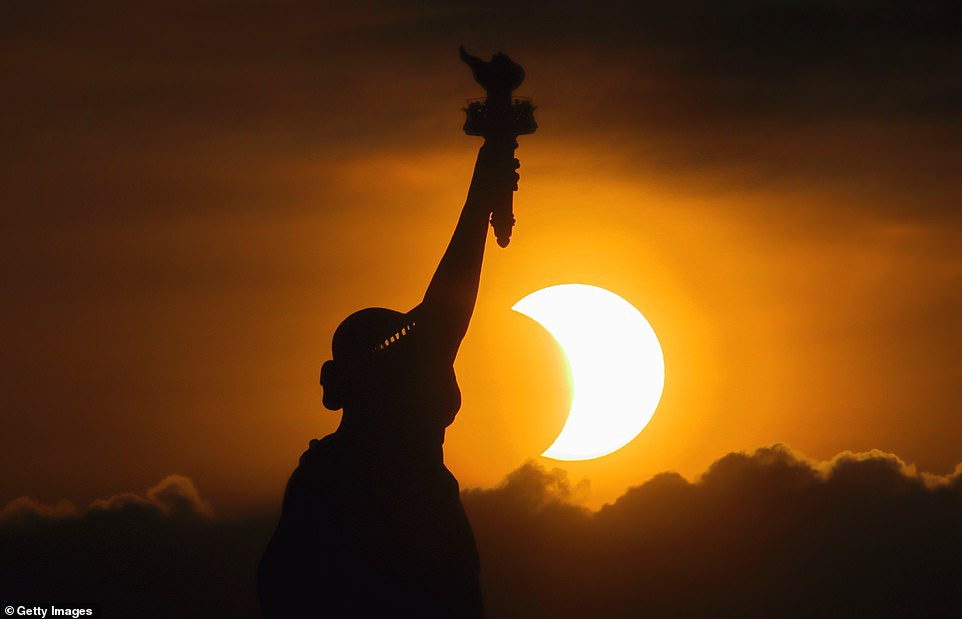 NEW YORK: The sun rises next to the Statue of Liberty during the annular eclipse on Thursday morning 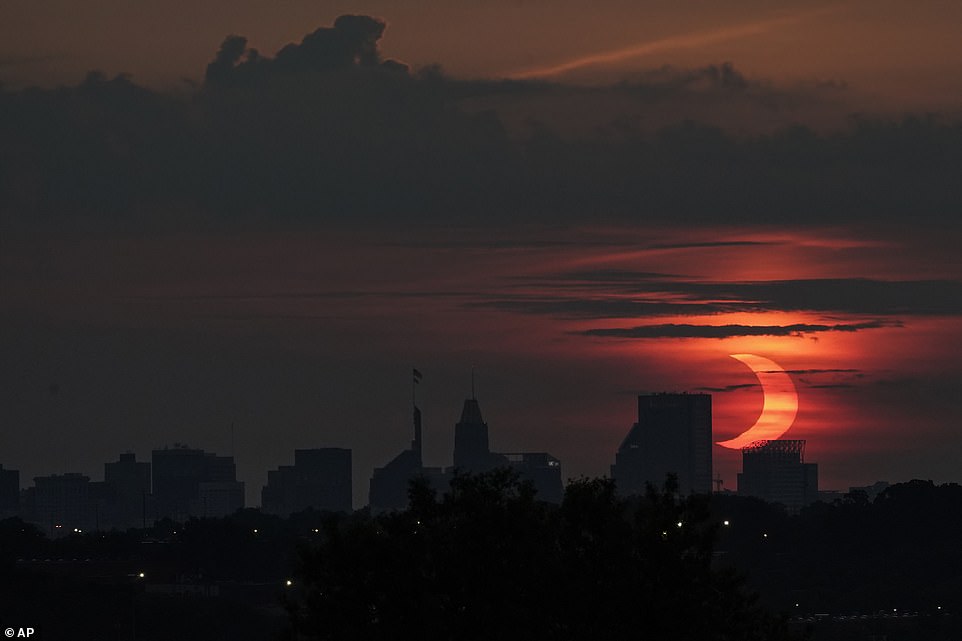 BALTIMORE, MARYLAND: The partial solar eclipse was visible over the Baltimore skyline at about 5am on Thursday 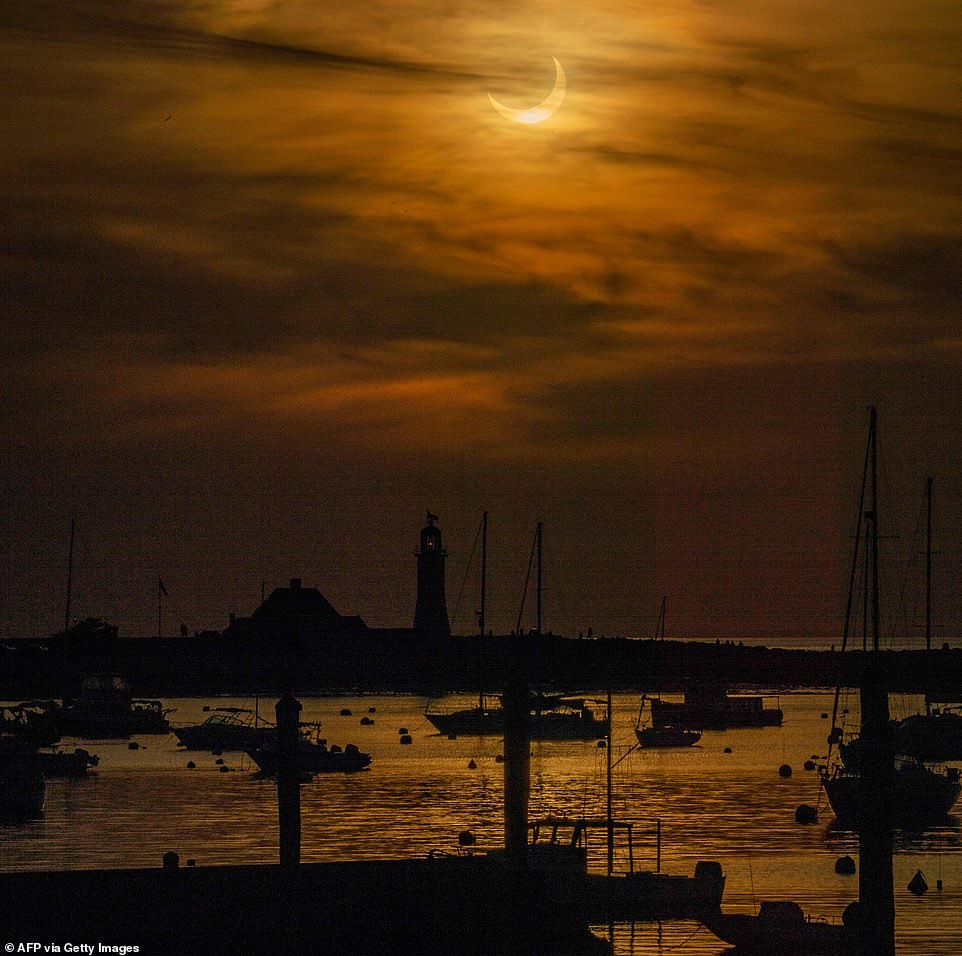 SCITUATE, MASSACHUSETTS: The partial eclipse was spotted rising over the Scituate Lighthouse in Massachusetts 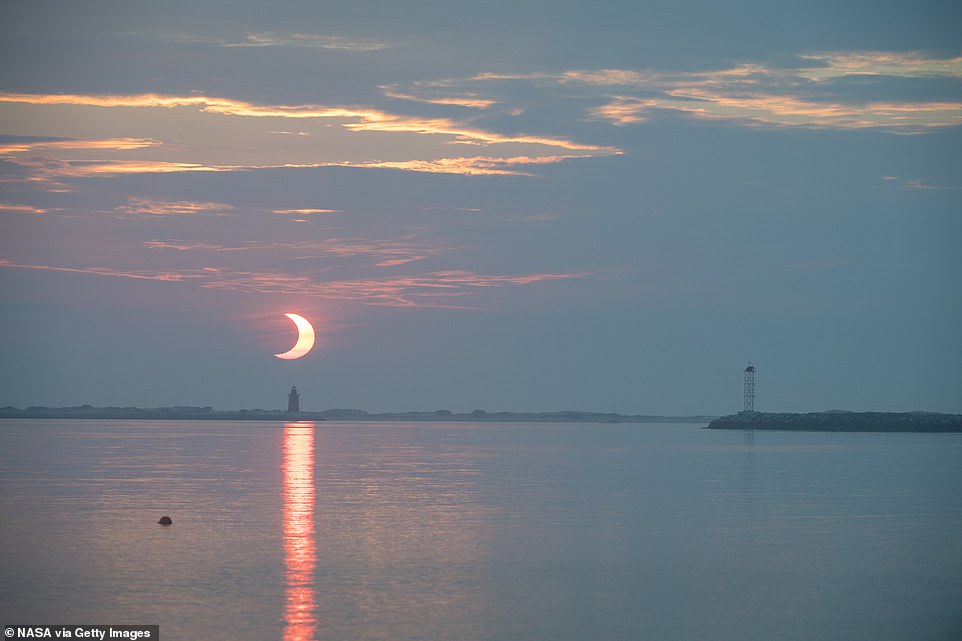 LEWES, DELAWARE: A partial solar eclipse is seen as the sun rises behind the Delaware Breakwater Lighthouse on Thursday 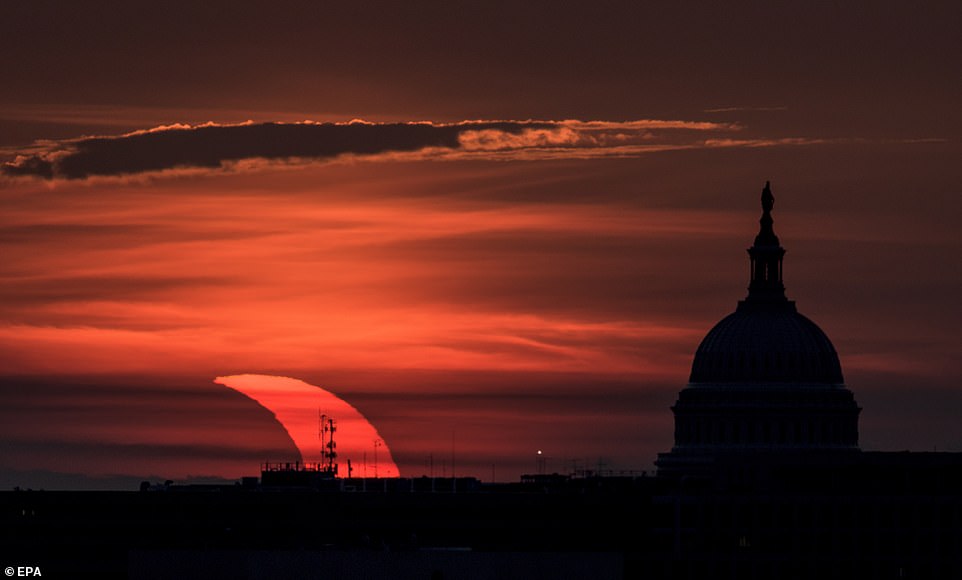 WASHINGTON DC: The partial eclipse is seen above to the left o the US Capitol Building on Thursday morning

The ‘ring of fire’ solar eclipse occurs when the moon is at its furthest from Earth and is therefore too far away to completely cover the sun, leaving a ring of light.

The ring of fire was best viewed from Qaanaaq, a town in Northwest Greenland, but was also visible across parts of Canada and Russia.

Sky-watchers in the UK and Ireland had only been expecting a partial eclipse but were disappointed when the celestial event was ruined by clouds.

The overcast weather in southwest England and south Wales resulted in the eclipse being blocked out in parts of Britain. For anyone who did catch a glimpse, about 30 per cent of the sun was blocked out in Scotland and 20 per cent in southern England.

In the United States, as much as 70 per cent of the sun was blocked by the moon.

The unusual and rare sunrise eclipse was visible right up the East Coast, according to astronomers.

From South Carolina and moving north, skygazers needed to look north just after sunrise to spot the moon taking a bite out of the sun as it slowly rose over the horizon.

Philadelphia, New York and Boston saw 70 per cent of the sun eclipsed by the moon..

Those in New Jersey and New York caught a glimpse of ‘red devil horns’, which is also known as the crescent sun. 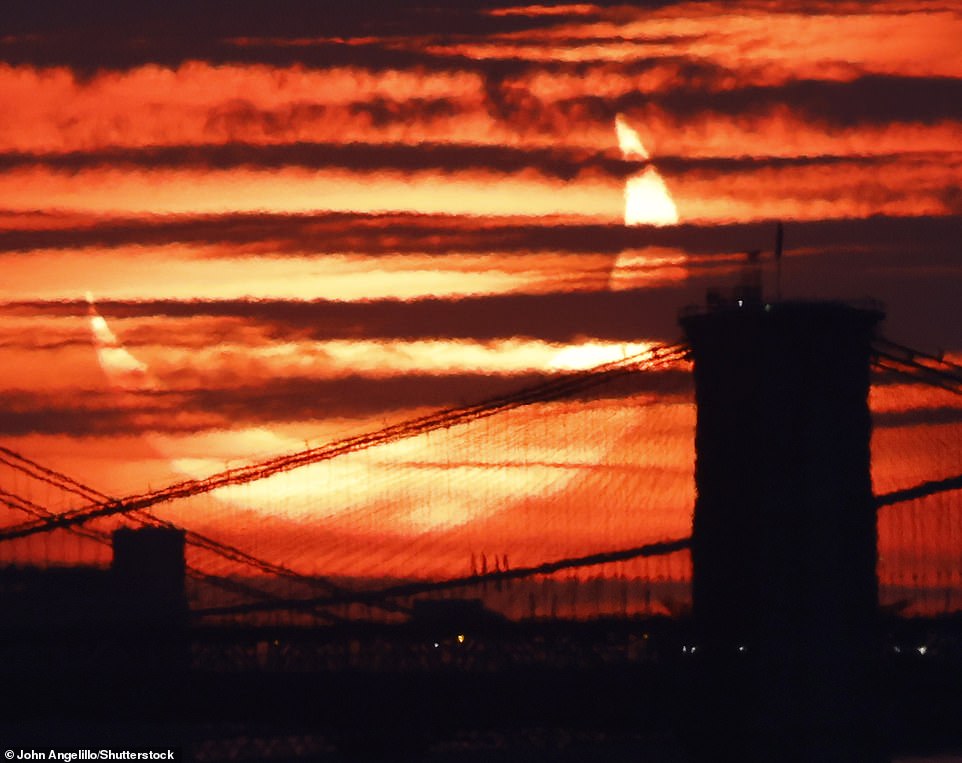 NEW YORK: Those along the East Coast who were early enough managed to catch a glimpse of the partial solar eclipse, which occurs when the moon blocks about 60 to 80 percent of the sun 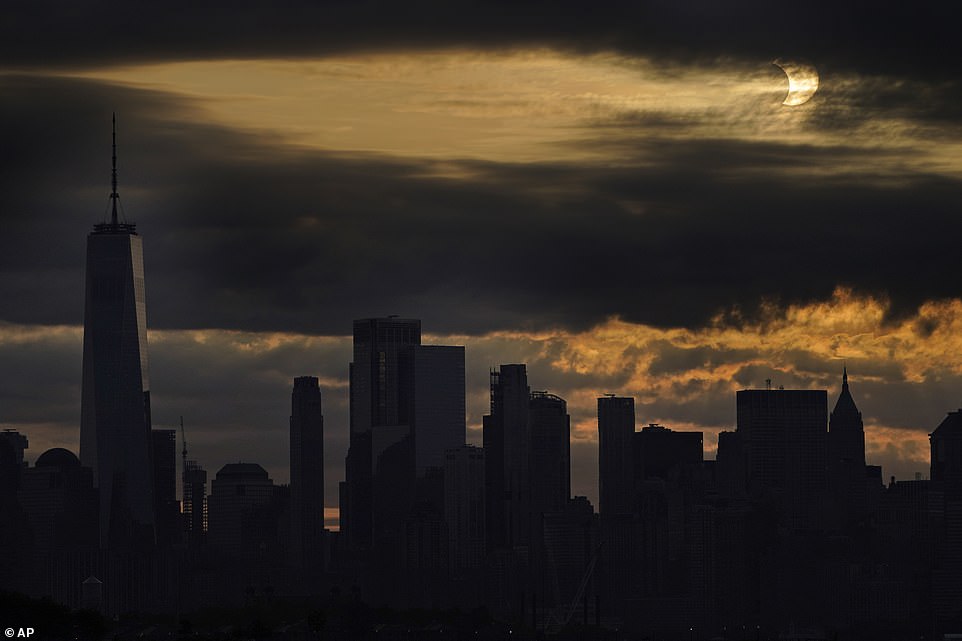 NEW YORK: The sun can be seen partially eclipsed as it rose above Manhattan on Thursday morning 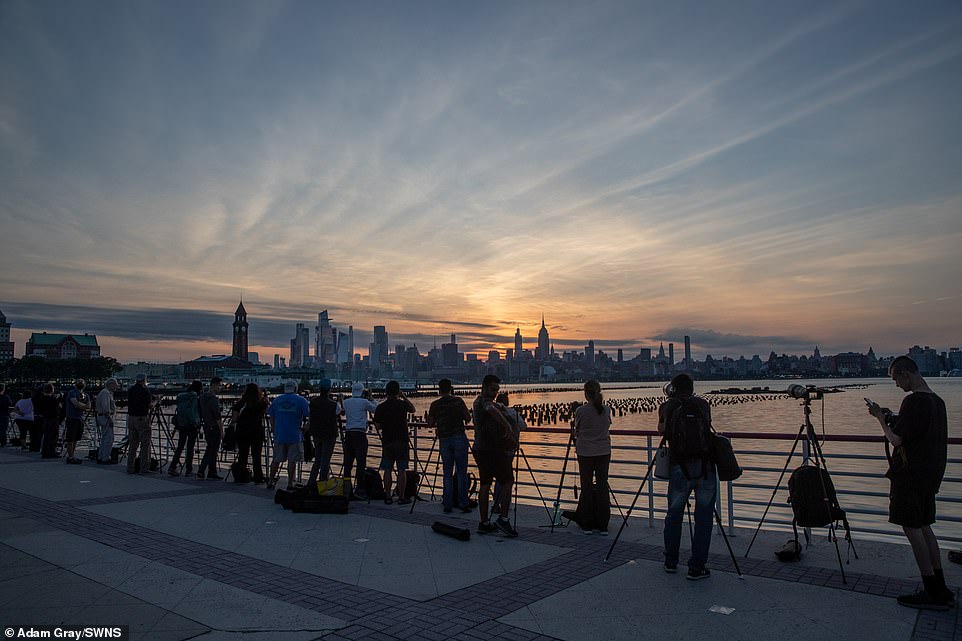 NEW YORK: Photographers lined up in New Jersey before dawn as they attempted to photograph the eclipse