A motorist jailed for driving at more than 150mph on a motorway has been mocked mercilessly online by locals poking fun at his staring eyes.

Nathan Batha, 19, hit speeds of 157mph when he drove his black Audi on a motorway in Cheshire on December 13.

Police were forced to halt a pursuit for safety reasons when he accelerated far beyond the speed limit, but he was later stopped in a residential area of Warrington.

He was jailed for 12 months after he pleaded guilty to dangerous driving, failing to stop for the police and driving without insurance.

After his mug shot was released by Cheshire Police, social media users were merciless in their mockery of his ‘surprised’ expression. 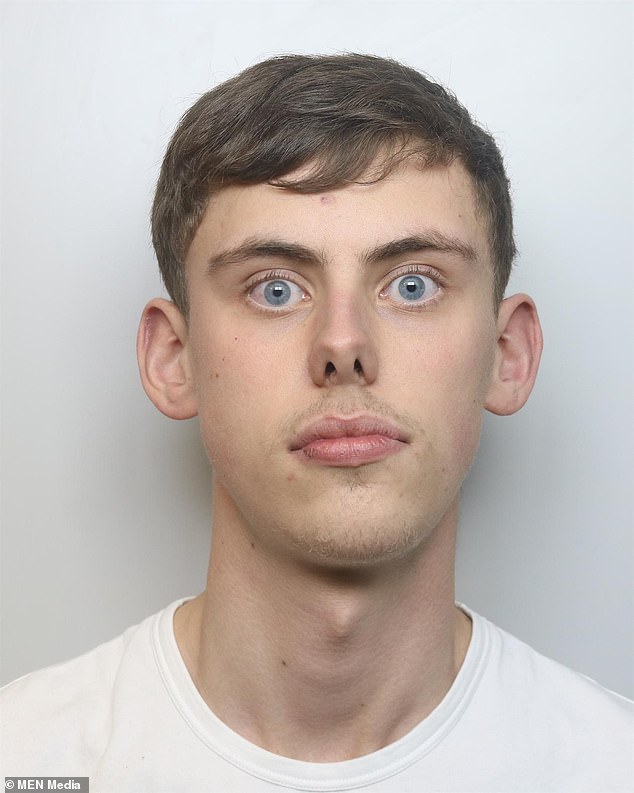 Nathan Batha (above), 19, hit speeds of 157mph when he drove his black Audi on a motorway in Cheshire on December 13

One user joked: ‘He looks surprised by this decision’ while another said ‘the gap between his ears is too big and is obviously missing a brain’.

Police pulled back from chasing Batha, from Staffordshire, on the M6 when he started undertaking vehicles at dangerous speeds last December.

The Audi was later followed by an unmarked car and Batha was seen travelling along the A57 Manchester Road in Warrington at more than 100mph.

Police said he went through a red traffic light at over 100mph on a road with a 40mph speed limit.

A stinger device was used, puncturing one of his tyres, but he failed to stop and he was eventually halted and arrested after going around a roundabout the wrong way.

After he was sentenced at Liverpool Crown Court, PC Chris Jones, who led the investigation said: ‘Thankfully no-one was injured as a result of Nathan Batha’s dangerous driving on both the M6 and in a residential area of Warrington. 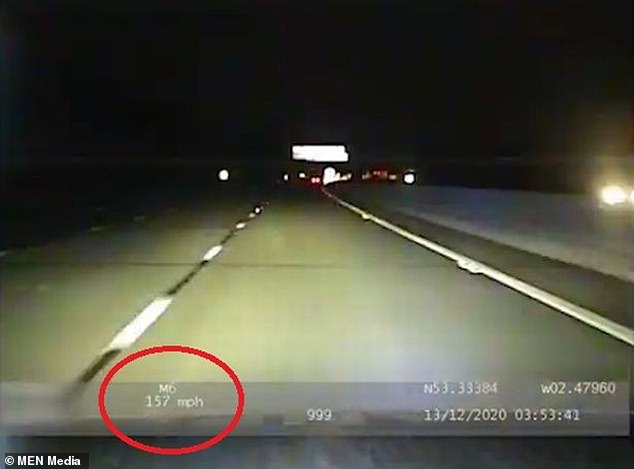 Police were forced to halt a pursuit for safety reasons when he accelerated far beyond the speed limit, but he was later stopped in a residential area of Warrington. Pictured: The chase

‘By speeding on the M6, and then driving at over 150mph on the motorway and over 105pm on a road with a 40mph limit in a bid to escape punishment for the manner of his driving, Batha put his life and the lives of other road users at risk.

‘The consequences of this incident could have been far worse.’

Superintendent Jon Betts, head of Cheshire Constabulary’s Roads and Crime Unit, added: ‘We take dangerous driving offences very seriously at the force and anyone found travelling dangerously at excess speed will be dealt with robustly.

‘Driving a motor vehicle is a privilege, not a right, and it comes with great responsibility to act within the rules laid down when you pass your test.

‘When you deliberately ignore those rules, you put yourself and other people at considerable risk.

‘Speeding reduces your time to react and deal with things like changes in driving conditions and actions taken by other road users. 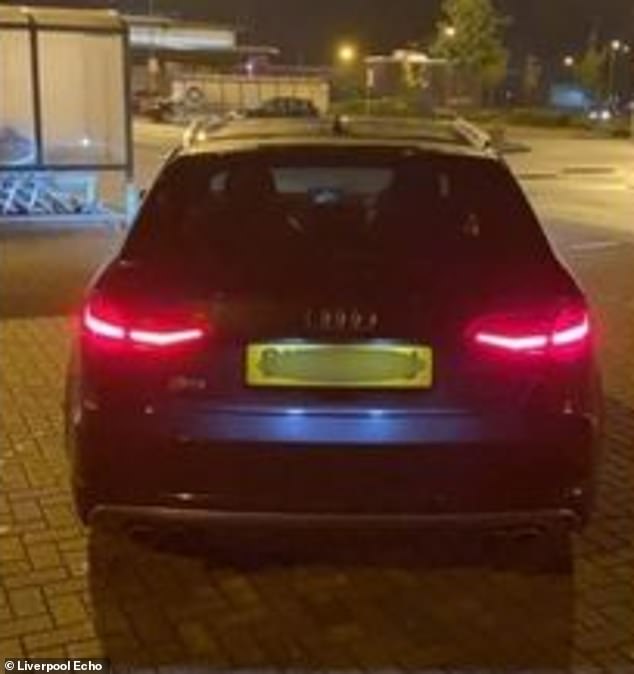 Batha was jailed for 12 months after he pleaded guilty to dangerous driving, failing to stop for the police and driving without insurance. Pictured: Batha’s Audi ahead of the incident

‘It also magnifies other driver errors, such as travelling too close to other vehicles or driving or riding when tired or distracted, multiplying the chances of causing an accident.’

After Batha’s mugshot was released online, several social media users took the opportunity to mercilessly mock the size of his ears.

One suggested he had ‘stuck his head out the window judging by his eyes’ while another compared his head to the Champions League trophy.

Commenting on Facebook, another wrote: ‘Hope the windows were closed, he would have took off with them ears.’

Adam Birchall asked: ‘Has he drove with the windows open? Because his face seems to have blown to the side.’

One wag quipped of his large ears: ‘If he would have stuck his head out the sunroof he would have gone from 105mph to zero in around 1.25 seconds with those windbreakers!’

Some users compared him unflatteringly to comedian Jack Whitehall, with one writing: ‘Jack Whitehall has let himself go’ and another suggesting ‘He looks like a shocked Jack Whitehall’.

Batha will spend his sentence in a Young Offenders Institution.