Biden touts his plan to make the U.S. the ‘arsenal of vaccines’ by promising 500 million Pfizer shots to distribute to poor countries – including those who split with US policy

President Joe Biden touted what he called a ‘historic announcement’ Thursday to have the U.S. serve as an ‘arsenal for vaccines’ as part of an effort to stamp out the coronavirus.

Speaking from St. Ives as he begins his week-long trip of Great Britain before heading to the continent for meetings with a skein of world leaders, Biden championed a new U.S. effort to enter into contracts for $500 million worth of Pfizer vaccines.

The plan is to distribute them to the international Covax agency, as well as directly to some countries. 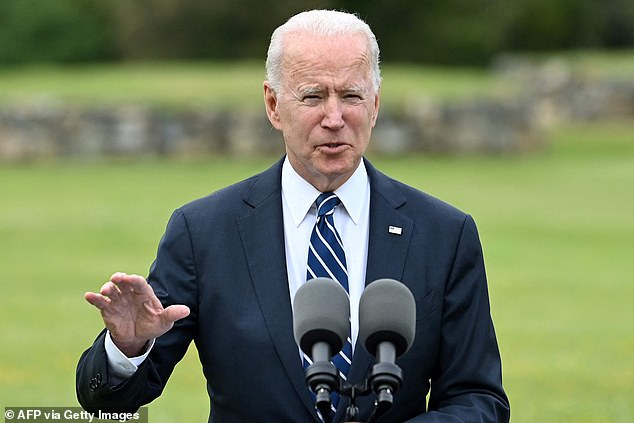 President Joe Biden said in the UK that the U.S. will be the ‘arsenal of vaccines’ as he spoke of an effort to send 500 million Pfizer doses abroad

Biden trumpeted U.S. economic gains and forecast growth. ‘Just as the American economy is recovery, it is an all of our interest to have the global economy began to cover recovery as well,’ he said.

‘That’s why, as I said in my address to the joint session of Congress in April, American, will be the arsenal of vaccines, and our fight against global COVID-19 Just as America was the arsenal of democracy during World War II.

He called it a ‘historic announcement,’ and said America ‘knows firsthand the tragedies of this pandemic’ as the leader in recorded deaths.

‘We had more we’ve had more people die in the United States than anywhere in the world, nearly 600,000 are fellow Americans, moms, dads, sons, daughters, brothers, sisters, grandparents. ‘More deaths COVID-19 In United States than from World War One World War Two. The Vietnam War and 911 combined combined,’ he said. 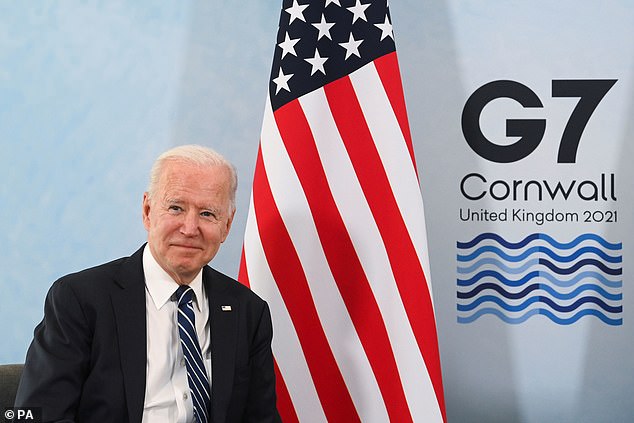 Biden spoke at the beginning of a G7 summit in Cornwall

‘We know the tragedy. We also know the path to recovery,’ he said, with the UK and Europe still imposing strict lockdown measures that US states have begun to lift.

U.S. vaccination rates have reached 64 per cent, but it will take a lift to reach Biden’s goal of getting 70 percent of adults vaccinated.  Just getting the vaccines out the door – which is already expected to run into next year, won’t solve the problem, as many of the nations getting them will have difficulties getting shots into arms just like in the U.S.

‘It took a Herculean effort on the part of our government to manage one of the biggest, and I would say most complicated logistical challenges in our history, the ingenuity of scientists, building on decades of research to develop a vaccine,’ Biden said. ‘it took the full capacity of American companies manufacturing and delivering the vaccines around the clock.

‘And as a result. You’re the lowest number of daily deaths since the first day of this pandemic. Our economy is rebounding, our vaccination program has already saved tens of 1000s of lives that count growing each day, and has allowed millions, millions Americans get back to living their lives.

‘This is about our responsibility, our humanitarian obligation to save as many lives as we can. and our responsibility to our values. We value the inherent dignity of all people in times of trouble. Americans reach out, offer help and offer a helping hand,’ Biden said.

And when we see people hurting and suffering anywhere around the world, we seek to help as best we can.

He called the effort ‘in America’s self interest’ as dangerous new virus variants spread.

His administration is describing the effort as part of a way to demonstrate to the world that democracies are the best way forward.