‘I don’t… I don’t know,’ Cole told reporters on a Zoom call in between several pauses. ‘I don’t quite know how to answer that, to be honest.’

Cole continued without addressing the question about Spider Tack directly. 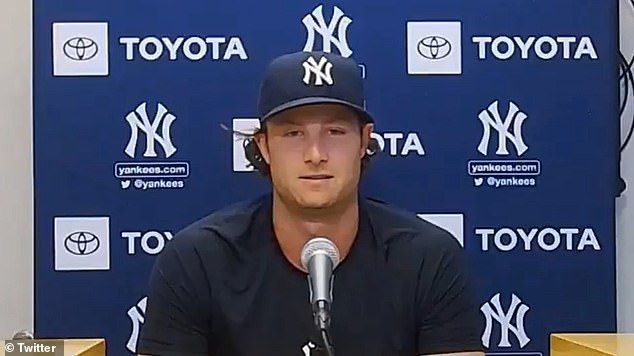 When asked if he’s used Spider Tack while pitching, Yankees ace Gerrit Cole paused for six seconds before saying: ‘I don’t quite know how to answer that, to be honest’

‘This is important to a lot of people who love the game, including the players in this room, including fans, including teams, so if MLB wants to legislate some more stuff, that’s a conversation that we can have. Because ultimately we should all be pulling in the same direction on this.’

MLB recently announced that pitchers are to be checked for foreign substances repeatedly by umpires, who are permitted to conduct 10 random checks per game.

At least four minor league pitchers have been suspended this season for using banned foreign substances to doctor baseballs — ostensibly evidence of a stronger crackdown in the game’s feeder system than in the big leagues during this historically dominant stretch of pitching. (There have been six no-hitters this season — one shy of the all-time record — and through May 31, MLB hitters were batting just .236, the lowest mark since 1968)

The use of homebrewed sticky substances – typically made from sunscreen and rosin – is suspected to have spiked in recent seasons to increase the spin rates on fastballs and make those pitches harder to hit. 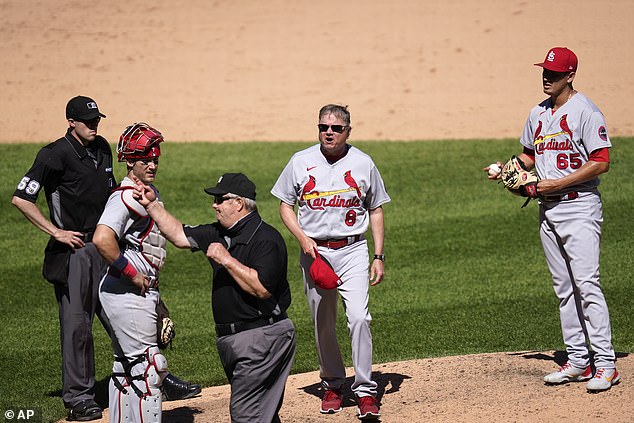 St. Louis Cardinals manager Mike Shildt was ejected from a game on May 26 when his pitcher, Giovanny Gallegos, was accused of using a sticky substance to doctor baseballs

Minnesota Twins third baseman Josh Donaldson casually wondered to reporters last week if Cole had been using a foreign substance because the spin rate on his pitches suddenly dropped as MLB’s crackdown got underway.

‘Is it coincidence that Gerrit Cole’s spin rate numbers went down (Thursday) after four minor leaguers got suspended for 10 games?’ Donaldson asked reporters on Friday. ‘Is that possible? I don’t know. Maybe.’

Cole, who starts against the Twins in Minnesota on Wednesday night, did display a reduced spin rate on his pitches in a rough outing on Thursday.

According to MLB Statcast data on the website Baseball Savant, Cole had a 125 rotations per minute decrease in his four-seam fastball last week when he allowed five runs in five innings in the loss to Tampa Bay.

But rather than the sudden absence of Spider Tack, Cole blamed the diminished spin rate on his mechanics.

‘I’m just not quite bringing out my best delivery,’ Cole said. ‘Of course it’s something that we monitor. Of course there are other variables that we monitor as well when we’re evaluating our performance from every game. You try to take as much information as you can as a player, and certainly that’s one of them.

‘We’re trying to get better this week and put in the work, and I’ll be as prepared as I possibly can for my next start.’

Cole called the criticism ‘undesirable’ but declined to respond specifically to the allegation.

‘I understand this topic is important to everybody that cares about the game,’ he said. ‘In regards to Josh [Donaldson], I kind of felt like it was a bit of a low-hanging fruit, but he’s entitled to his opinion and to voice his opinion, so I just have other things that I need to keep my focus on.’

Cole, not quite halfway into the second season of a $324 million, nine-year contract, is third in MLB with 104 strikeouts. The three-time All-Star has a 2.26 ERA over 75 2/3 innings and 12 starts this season.

Despite those suspicions, no big league pitchers have been suspended or fined for using illegal substances this season.

Donaldson said Friday that the sticky substance situation is going to be ‘the next steroids of baseball ordeal’ for its performance-enhancing effect on the game.

‘Hitters have never really cared about sunscreen, rosin and pine tar,’ Donaldson said. ‘We haven’t cared about that because it’s not a performance enhancement. What these guys are doing now are performance-enhancing, to where it is an actual superglue-type of ordeal, to where it’s not about command anymore.

Cole, a member of the executive subcommittee of the players’ association, said he welcomed the dialogue about the use of and legality of grip aids.

‘This is important to a lot of people who love the game, including the players in this room, including fans, including teams, so if MLB wants to legislate some more stuff, that’s a conversation that we can have,’ he said. ‘Because ultimately we should all be pulling in the same direction on this.’

Said Yankees manager Aaron Boone: ‘In the end, all that anyone really wants – pitchers, position players, managers – is the best possible product and the most level of playing field that we can create.’