At least 300 interpreters who worked with Australian troops during the war are seeking protection in here as allied troops depart Afghanistan.

Murderous Taliban operatives placed many of them on ‘kill lists’ for working with ‘enemy infidel’ over the past 20 years of war.

A letter was handed out to some interpreters making direct threats on their lives, including a father who worked with Australian troops in 2010. 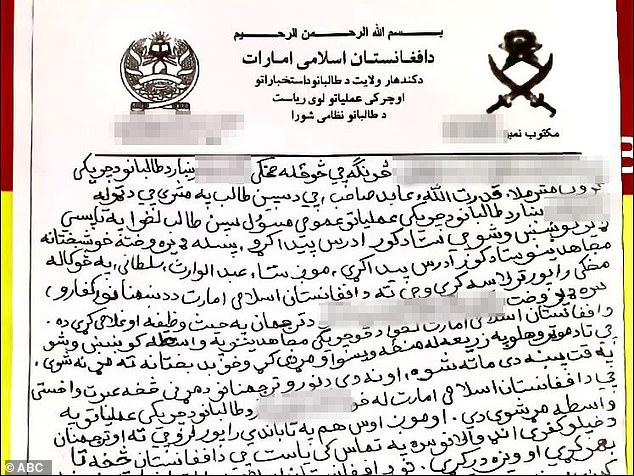 A letter (written in Pashto) was handed out to some interpreters making direct threats on their lives, including a father who worked with Australian troops in 2010 reading: ‘Await your death very soon’

Taliban operatives tracked him to his home and taped the letter signed by ‘guerilla operations’ commander named Spin Talib to his door.

‘We are honest in our words and we will get you, be it day or night, and you will be punished, and we will reach our goal,’ the letter read.

The letter condemned him for his work ‘for a long time with infidel enemies of the Islamic Emirate of Afghanistan, as an interpreter and a slave’.

‘We have tried to kill you by hitting you with a vehicle, but unfortunately you did not die, only your leg was broken,’ it read.

This chilling threat was a reference to a 2016 attack on the man when he was out shopping.

‘My leg is broken [in] three places, when I open my eyes, I was in hospital,’ he said in a video filmed in his hospital bed at the time.

The letter obtained by the ABC went on to claim the Taliban ‘Department of Intelligence and Military Council’ ordered Commander Talib to kill him.

‘We have reports that you and other interpreters are in contact with infidel friends, to get you out of Afghanistan and get you a visa,’ it continued..

‘Therefore you will not be forgiven by the Islamic Emirate of Afghanistan, neither will we accept any other excuse.’

Retired Australian Army officer Jason Scanes, who worked with the translator, said the man was now in hiding with his family.

‘He’s extremely concerned about this situation, obviously he’s had to move himself and his young family out of his house – they are moving around trying to find secure locations,’ he told the ABC.

The Taliban claimed translators would not be harmed if they ‘repented’ for their work with foreign soldiers, but the interpreters do not trust their word.

Incredibly, the translator’s application for a humanitarian visa in 2013 was rejected by then-Immigration Minister in 2018 on ‘character grounds’ – despite his risky work for Australian troops in the field. 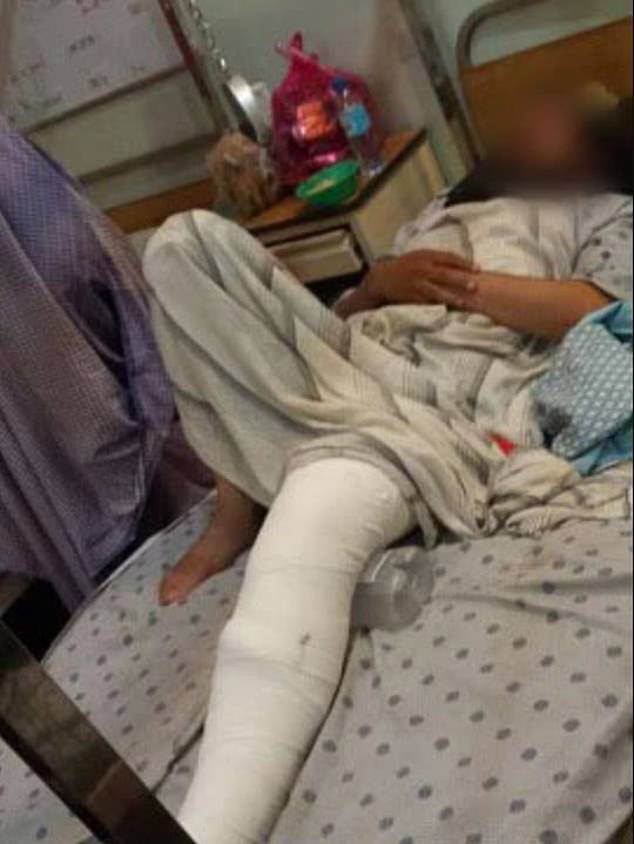 The translator was in 2016 run down with a car by Taliban operatives while he was out shopping, breaking his leg in three places

The Federal Court finally overturned the decision last May, finding Mr Dutton didn’t did not adequately consider the threat to the interpreter’s life.

‘It is apparent that there was no meaningful engagement given to the assertions made by the declarants concerning the appellant’s family.

‘[Mr Dutton’s decision] neither acknowledges nor grapples with the extraordinary circumstance that the work the appellant had undertaken with the ADF in Afghanistan was said to have placed his family members at risk of being murdered.’

Scott Morrison said Australia was ‘very aware’ of the issue and was steadfastly going through the paperwork for all 300 of the translators.

The prime minister said it was a sensitive matter but one that he recognised had to be dealt with swiftly.

‘We have done this before safely, and we will be able to do it again, but it would be very unhelpful for me to elaborate any further on that issue,’ he told reporters in Sydney on Tuesday.

‘We are very aware of it and we are working urgently and steadfastly and patiently to ensure that we do this in the appropriate way as we have done on earlier occasions.’ 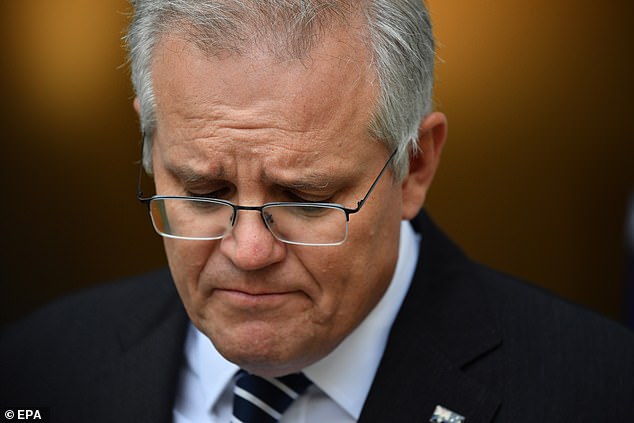 The military chief who led Australia into Afghanistan 20 years ago earlier warned vulnerable interpreters must not be left behind.

‘It would be unconscionable to leave these people to the mercy of the Taliban. We must do something to help them.’

Mr Barrie likened the situation to the aftermath of the Vietnam war, when military supporters brought refugees into Australia before political leaders officially endorsed their arrival.

The interpreters’ plight has been made all the more difficult following Australia’s decision to close its embassy in Kabul due to security fears.

Mr Barrie questioned the embassy closure decision, saying it made it even harder to lodge visa applications.

‘But I’m sure if we put our minds to it we could find a way around that,’ he said.

‘I’m not sure that (closure) was a good call myself but we must not ever leave these people to fend for themselves.’

Britain and the US both agreed to fast-track the resettlement of thousands of Afghan interpreters and their families.

Foreign Minister Marise Payne spoke about the visa issue on a recent trip to Kabul and has indicated the government is keen to support all eligible translators.

The last remaining Australian troops will depart Afghanistan by September, following America’s decision to end the war before the 20-year anniversary of the 9/11 terror attacks.