This is the terrifying moment a large sink hole emerged outside a Jerusalem hospital, swallowing several cars.

The incident happened outside the Shaare Zedek Medical Center and amazingly there were no injuries.

The sinkhole emerged yesterday near top the spot where a highway tunnel is being dug.

The Times of Israel reported that the tunnel, which also runs underneath the hospital and parking lot, appeared to have partially collapsed. 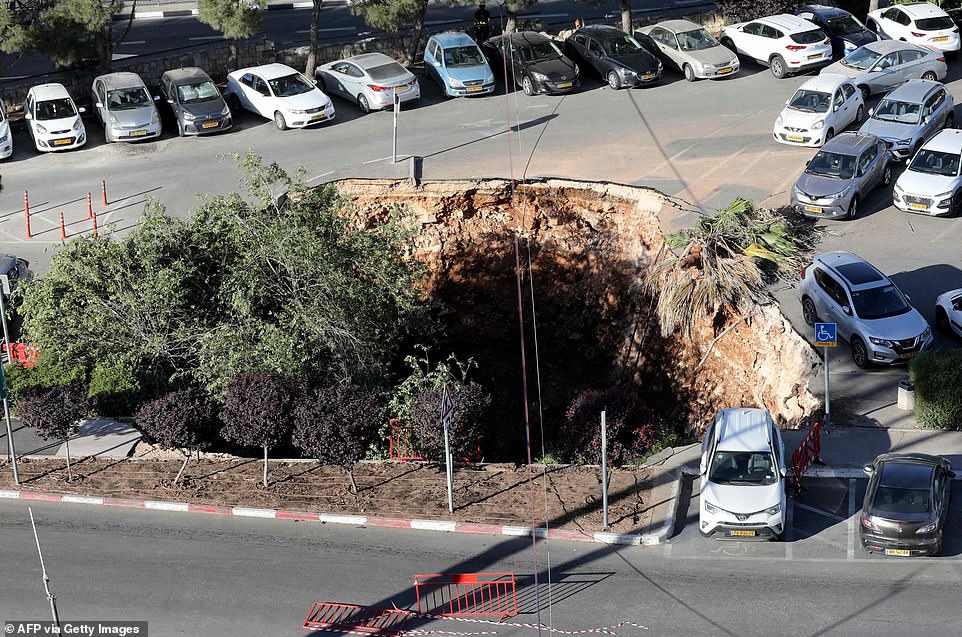 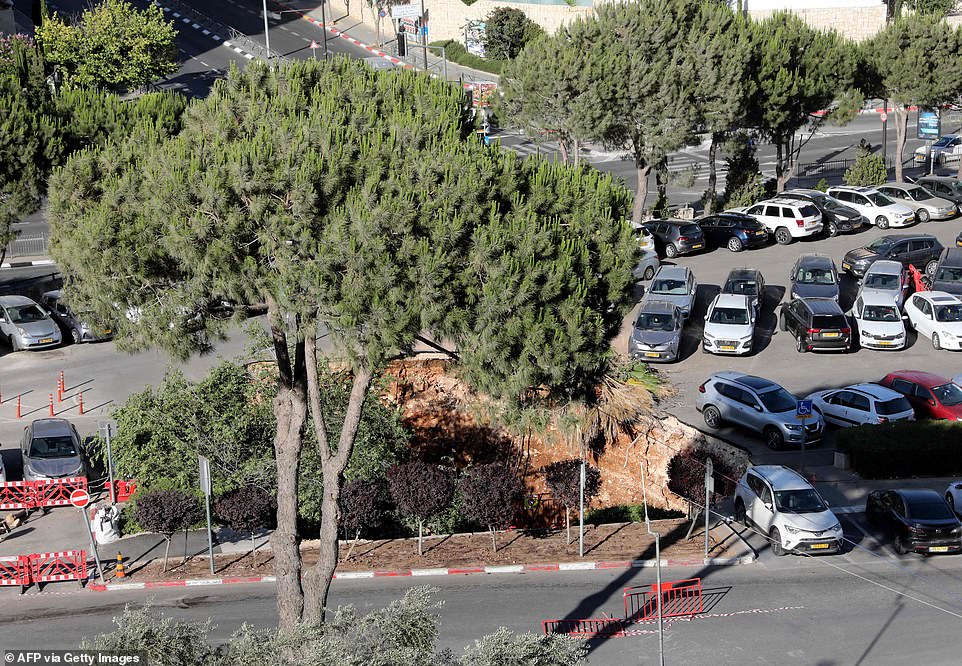 Chilling CCTV footage showed cars tumbling into the hole but amazingly nobody was injured in the incident.

A total of seven units of the local fire brigade attended the scene as well as a special rescue truck.

A spokesperson for local police told reporters that a rescue team used specialist equipment when they were lowered into the hole in order to scan for any signs of life.

Fortunately the three cars which fell into the hole had been parked at the time and had no occupants.

According to the Jerusalem Post, tunnels are been dug on nearby Highway 16. A spokesperson for the Jerusalem Affairs Ministry told the paper they are investigating whether the sinkhole was caused by the construction work.

The Times of Israel said the collapse happened in an old car park at the hospital near to the pay station.

This follows another sinkhole which appeared without warning on a road in Ji’an in Jiangxi Province, southern China.

Footage shows a white car drive into the hole in the middle of a road junction on June 5.

Amazingly, the driver survived and was taken to hospital for treatment for their injuries.

Viewers speculated that the driver may have been confused by the dark shape in the road and not realised it was really a hole.

Local officials said heavy rain was responsible for the collapse.

It comes after an enormous 300ft wide and 60ft deep sinkhole opened up in Mexico, sending panicked residents fleeing from the area.

The sinkhole, which is still growing and is threatening to swallow up a house teetering on the brink, appeared in a field in Santa Maria Zacatepec, in the state of Puebla, on May 29.

The incident was caught on camera, showing the ground falling away as onlookers run to safety screaming. 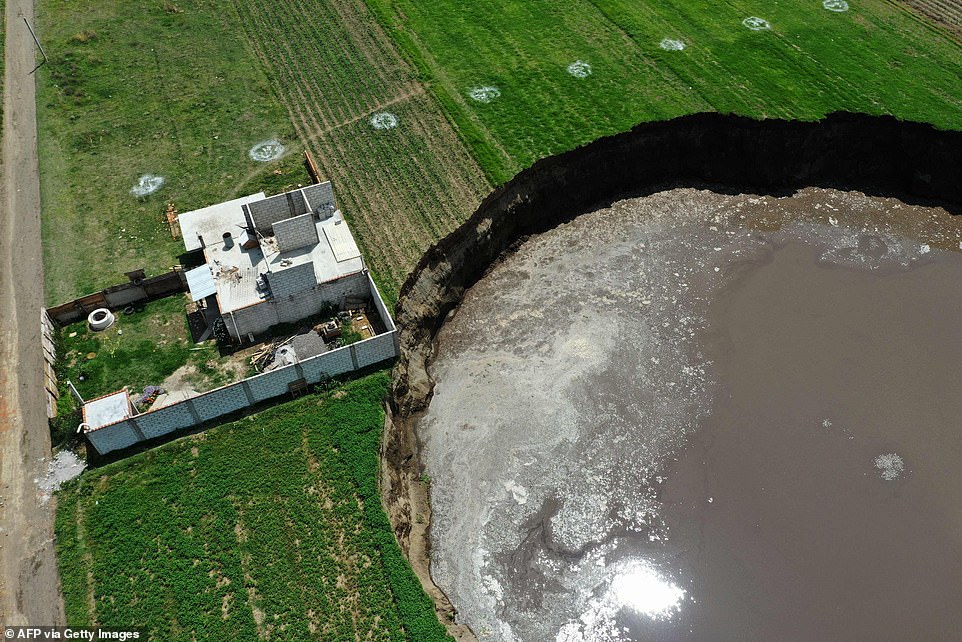 Aerial view of a sinkhole that was found by farmers in a field of crops in Santa Maria Zacatepec, state of Puebla, Mexico 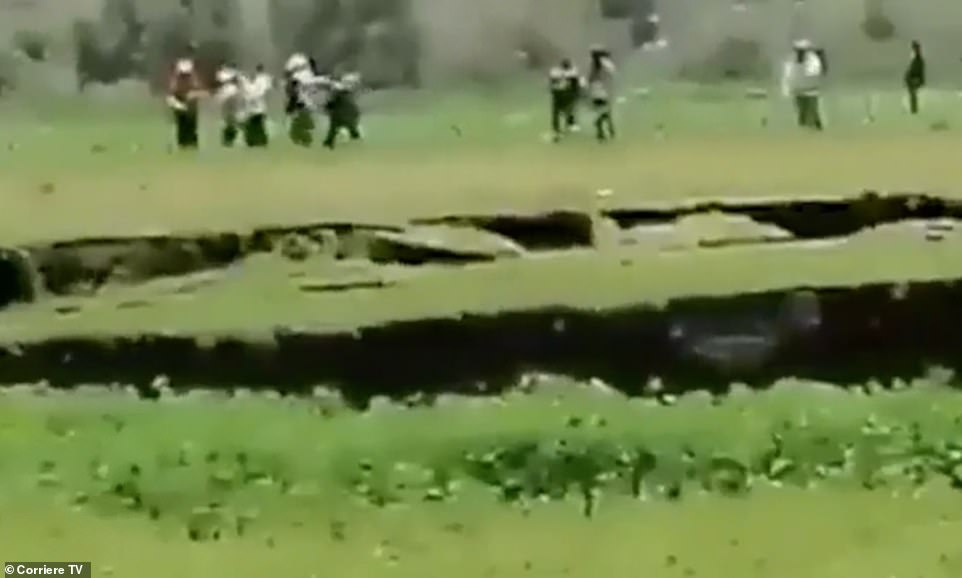 This is the moment an enormous 300ft wide and 60ft deep sinkhole opened up in Mexico, sending panicked residents fleeing from the area

A sinkhole is a hole in the ground created by erosion and the drainage of water.

They can range in size from a few feet in diameter to the size capable of swallowing entire buildings.

They are a natural phenomenon but the process is often amplified by human processes and interference.

There are two basic types of sinkhole which are separated by how they form.

Slow developing ones are known as a cover-subsidence sinkhole and those that appear suddenly are called a cover-collapse sinkhole.

The sudden holes which seize headlines are the latter and can cause devastation and even death.

Often, it involves soluble rock, such as limestone, becoming moist and eroding rapidly.

This then leads to a swift loss of land and a sinkhole emerges.