Allies of Donald Trump have begged him not to mention a conspiracy theory claiming he’ll be reinstated as president by August over fears it’ll damage his re-election chances.

Trump will appear at the North Carolina Republican Party’s annual convention on Saturday but his aides are advising him to keep quiet on an outlandish claim he is said to have made earlier this week mooting a return to the presidency in the next two months.

New York Times White House correspondent Maggie Haberman first reported Tuesday that the former president ‘has been telling a number of people he’s in contact with that he expects he will get reinstated by August.’ 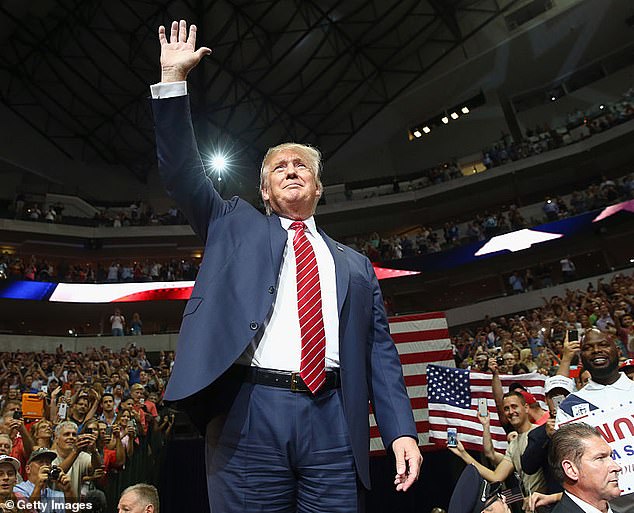 Haberman also pointed out that Trump supporters have expressed support for the coup idea.

But one confidant told The Daily Beast they are praying that Trump does not bend to the will of his supporters when he takes the podium on Saturday.

‘I conveyed something [to Trump] to the effect of, ‘It would be a terrible idea to even say the word, “August” [at Saturday’s event],’ one source is said to have told the former president.

According to the Beast, several other sources have also got in touch with Trump to deliver a simple message: ‘Whoever is trying to get in your ear to tell you that you could be “reinstated” in the White House by August, or at any time during President Joe Biden’s term in office, doesn’t know what they’re talking about, and repeating their deranged theories in public could be used against you by your enemies. It would be better to focus on the 2022 midterm elections and, subsequently, the 2024 presidential race.’

The sources have also revealed that they have tried to make their case to Trump as gently as possible, fearing that if they push him too hard he will talk about it to spite them. 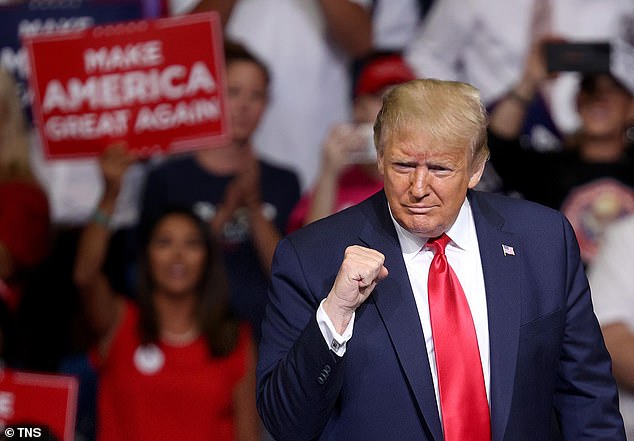 The former president has been telling people he expects to be reinstated as president by August, according to The New York Times’ Maggie Haberman 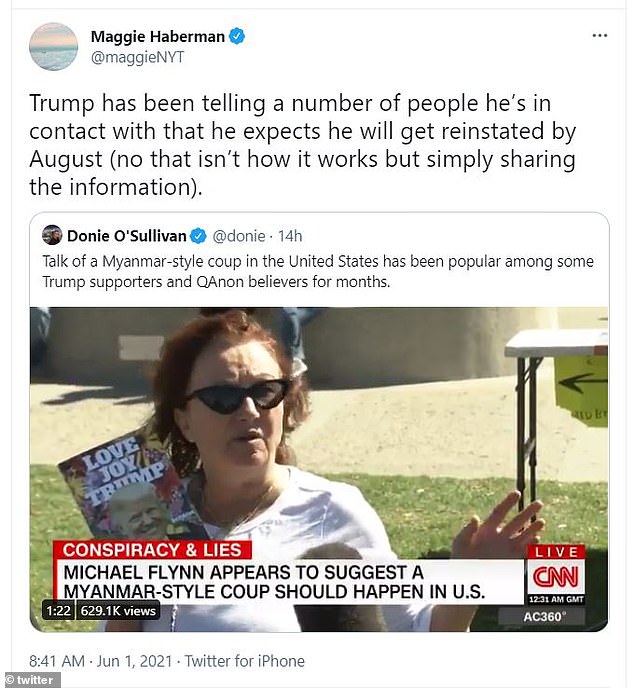 The former president lost legal protections once he left office in January, with Haberman reporting that Trump is pushing the idea of reinstatement as he faces potential indictment over his business dealings

Haberman also reported that Trump has been ‘laser focused’ on audits happening in Arizona with another expected in Georgia, as the former president continues to push the ‘big lie’

Trump has made sporadic statements since leaving the White House, the most recent of which saw him claim his theory that COVID came from the Wuhan Institute of Virology had finally been vindicated.

But he has not said anything about the August reinstatement claim, worrying Trump supporters opposed to any such reinstatement.

‘If Trump is saying August, that is probably because he heard me say it publicly,’ Lindell told The Daily Beast on Wednesday.

‘The month of August, for this, is subjective…but I don’t know if it’ll be that month, specifically…I spoke about it with my lawyers who said that they should have something ready for us to bring before the U.S. Supreme Court by July. So, in my mind, I hope that means that we could have Donald Trump back in the White House by August. That’s how I landed on August, and I’m hopeful that that is correct.’ 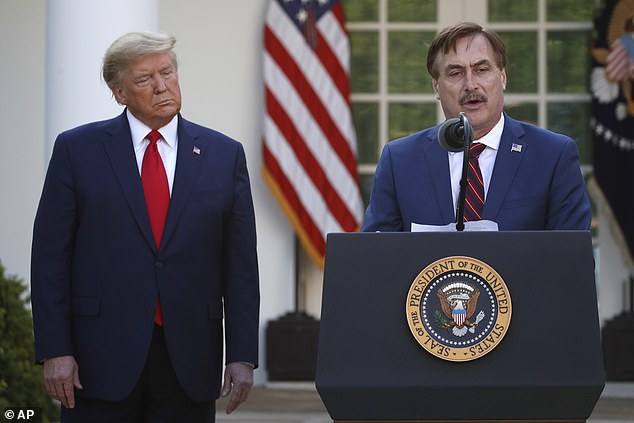 MyPillow CEO Mike Lindell, a staunch Trump ally, said he likely inspired him. ‘If Trump is saying August, that is probably because he heard me say it publicly.’ The two are pictured together at the White House on March 30, 2020

Lindell was referring to evidence that President Joe Biden won the November 2020 election fraudulently. No such proof of any such fraud has ever been uncovered, despite multiple claims by Trump suggesting he’d been kicked out of office unfairly.

On Thursday, Trump’s daughter-in-law, Lara Trump said that people are getting ‘worked up’ over nothing and her father-in-law does not actually expect to be reinstated as president.

‘As far as I know, there are no plans for Donald Trump to be in the White House in August. Maybe there’s something I don’t know,’ Lara told the Fox & Friends panel Thursday morning.

‘But no, I think that that is a lot of folks getting a little worked up about something just because maybe there wasn’t enough pushback, you know, from the Republican side,’ she added.

‘So no, I have not heard any plans for Donald Trump to be installed in the White House in August.’

Lara, who is married to Trump’s second-eldest son, Eric, appears to be the most high-profile member of the former president’s orbit to weigh in on the report and deny its validity. 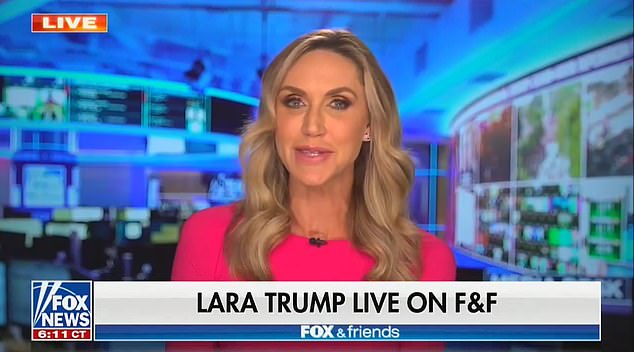 Donald Trump’s daughter-in-law Lara pushed back against reports Thursday, insisting to ‘Fox & Friends’ that the former president does not expect to be reinstalled at the White House in August

Trump shut down his ‘desk’ blog this week where he posted statements as a way to get around his social media ban.

The webpage was shuttered just 29 days after it launched because Trump didn’t like that it had such low readership and was getting mocked, according to The Washington Post.

Much of the former president’s musing through those statements were focused on his claims of widespread voter fraud. He also would complain of Democrats in Washington and issue endorsements for Republicans loyal to him.

Haberman said Trump has been ‘laser focused’ on election audits – including the state Senate Republican-led one in Maricopa County, Arizona, as well as another audit expected in Georgia’s Fulton County – as the Manhattan district attorney has convened a grand jury that is expected to decide whether to indict the former president.

Trump’s daughter-in-law, who shared two children with Eric, is largely rumored to be considering a Senate run in her home state of North Carolina for retiring Senator Richard Burr’s seat.

During the Thursday interview, Lara mocked the outlet that first claimed Trump thinks he will be reinstated in late summer 2021.

‘I think you should take a look at who those networks are and who is pushing that story out,’ she said of the report that came from the Times and soon thereafter was pushed by some of Trump’s biggest enemy outlets – CNN, MSNBC and The Washington Post. 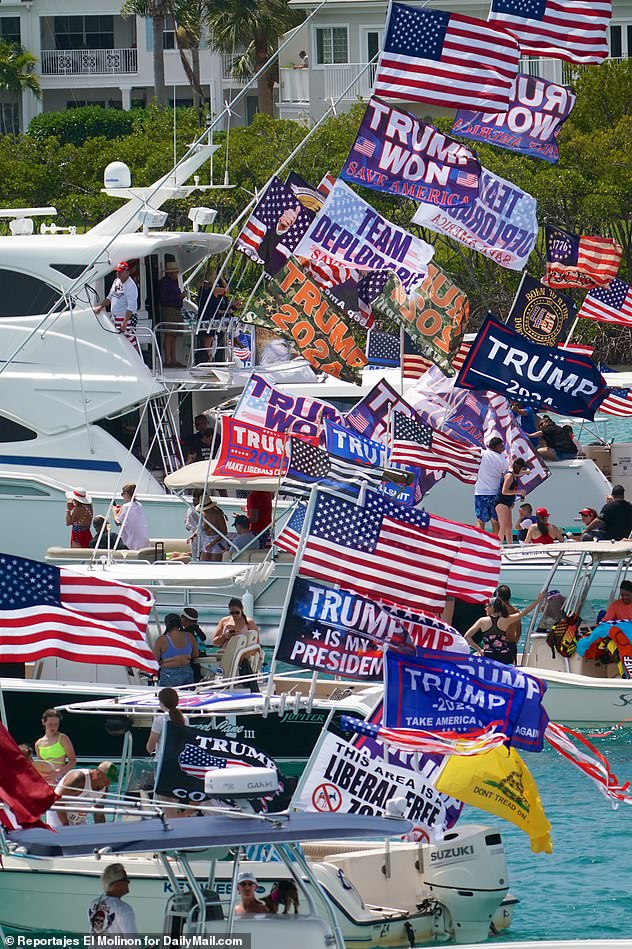 MAGA fans took to the water in Jupiter, Florida , for a boat parade earlier this week 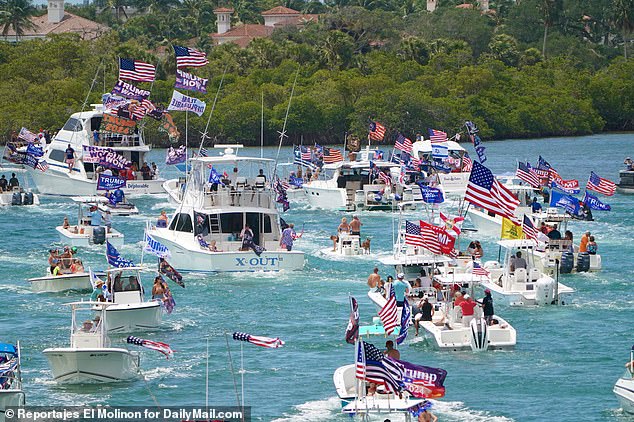 The huge flotilla of boats with a sea of Trump flags takes part of the parade in Jupiter, Florida

Trump has continued to falsely push that he didn’t lose the 2020 race to President Joe Biden.

Supporters have glommed on to that message, with a number of Trump fans sporting ‘Trump won’ flags at a large boat parade in Florida over Memorial Day weekend.

And some of his allies have given Trump’s most vehement supporters false hope that he could be reinstated.

Over the weekend, lawyer Sidney Powell told an audience in Dallas that Trump could be back.

‘It should be that he can simply be reinstated, that a new inauguration day is set,’ she said to cheers. ‘And Biden is told to move out of the White House. And President Trump should be moved back in.’

Powell is known for spreading a number of conspiracy theories to Trump supporters about the 2020 race.