Seats on the last flights back to London from the Algarve before Portugal is removed from the UK’s green list in less than four days’ time were on sale for up to £711 today.

Britons keen to stay abroad for as long as they can before the new rules come in next Tuesday at 4am face paying at least £258 if they fly back home the night before.

That is the cheapest flight next Monday, a WizzAir route leaving Faro at 9.05pm local time and arriving at London Luton at 11.50pm, four hours before the rules change.

Anyone flying back today faces paying at least £99, also for a WizzAir flight to Luton; while it is £91 on Saturday or £172 on Sunday, both for easyJet services to Gatwick.

The most expensive seats before Tuesday’s deadline can be found for £711 on a British Airways service from Faro to London City, leaving next Monday at 11am.

Among those trying to get home before the change is Simon Smith, a British tourist from Stamford, Lincolnshire, who is currently on holiday at Lagos in Portugal.

He told BBC Radio 4’s Today programme this morning: ‘Bit of a scramble I’m afraid. We’re trying to get some testing organised but obviously the Government released the information yesterday and it was a bank holiday in Portugal which didn’t help.

‘We’ve got the flights booked for Saturday at 10 o’clock but we’re being told by local doctors that it can be up to three or four days waiting for tests, so that we can fly.’

A Google Flights graph shows the cost of a single flight from Faro Airport to any London airport soaring over the next four days, before plunging from next Tuesday 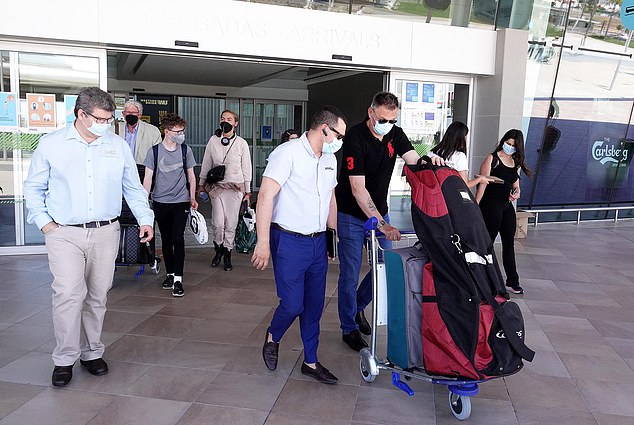 Air passengers leave Faro Airport on May 17, which was the first day that Britons were allowed to enter Portugal without needing to quarantine and the foreign travel ban was lifted

Travel bosses have accused ministers of laying waste to the industry and isolating the UK amid fears the shutdown could cost the economy more than £11billion.

The shrinking of the green list, the move to downgrade Portugal and the expansion of the red list wiped £2billion off the value of airlines.

Prices checked at 7am on Skyscanner

Meanwhile, industry figures warned that at least half the 1.6million jobs in the sector had either already been lost or were now at risk, with many more redundancies feared.

Many had been hoping for an expansion of the green list and a signal that foreign holidays will be back on the agenda this summer.

Instead, with the next review three weeks away, travel bosses were left fearing ‘another lost summer’ and a shattering of consumer confidence.

Mark Tanzer, chief executive of the travel agents’ association Abta, said it was clear the Government’s strategy was ‘continuing to prevent any meaningful resumption of international travel’.

He suggested it was time ministers considered bailing out the industry.

He warned: ‘You can’t build the recovery of a multi-billion-pound sector while mass market holiday destinations remain off the green list. The removal of Portugal comes on the back on what was already a very short and cautious green list.

‘Travel agents and tour operators haven’t been able to generate income since the start of the pandemic and have been depending on the return of international travel to help bring some much needed relief. 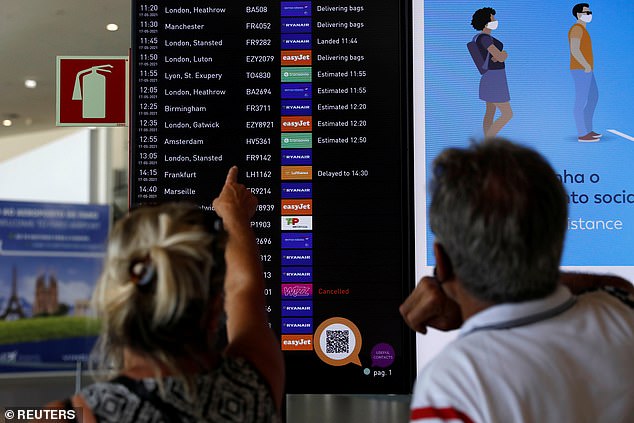 ‘The Government now needs to come forward with tailored financial support for the sector.’

‘Here I am in beautiful Gibraltar, it’s the last country standing, the only country meaningfully where you can actually go on holiday without too many restrictions and come back. It’s the only Mediterranean destination on the green list. 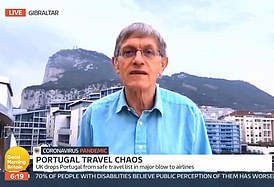 ‘There are fewer than 94 hours remaining for tens of thousands of British holidaymakers in Portugal to get out if they want to avoid ten days of quarantine when they get back. Air fares are going through the roof.

‘On top of that, the travel industry is in utter despair because they thought they would have Portugal, then that would gradually build and then quite soon Spain.

‘But instead the Government have effectively not just moved the goalposts on how these things are decided, but uprooted them and moved them to an entirely different arena.’

Other travel bosses meanwhile were equally scathing. EasyJet boss Johan Lundgren accused the Government of having ‘torn up its own rule book’; Brian Strutton, from the pilots’ union, said the decision to axe Portugal from the green list was ‘a total disaster for the already fragile travel industry’; while Tim Alderslade, chief executive of Airlines UK, which represents carriers, accused the Government of leading the industry on a ‘painful merry dance’.

The outcry came after the Government said Portugal would be added to the amber list from next Tuesday, forcing thousands of British holidaymakers to cancel their trips or cut them short to avoid quarantine.

It means there will be just 11 countries or territories on the green list, of which only Iceland and Gibraltar are viable holiday destinations. Hopes that the Balearics or Greek islands could be added were also scuppered.

Instead, seven countries are being added to the red list, forcing anyone returning from them to quarantine in Government-approved hotels at a cost of up to £1,750 per person.

Senior figures warned the about-turn would devastate confidence in foreign holidays because of the uncertainty over whether a green country could suddenly turn amber.

In 2019, outbound tourism was worth £11.7billion to the UK economy for the summer months, according to the Future of Aviation Parliamentary Group.

If the travel list stays as it is now for June, July and August, then it will only be worth a £200million.

Shares in IAG, the parent company of British Airways, fell 5 per cent, with easyJet sinking about the same.

Ryanair closed 1.3 per cent lower and TUI fell about 4.5 per cent.

BA warned the UK had reached a ‘critical point’ and was in urgent need of more air travel for business and pleasure to restart the economy and reunite loved ones.

Karen Dee, boss of the Airport Operators Association, added: ‘Summer 2021 is shaping up to be worse than last summer, which was the worst in aviation history. 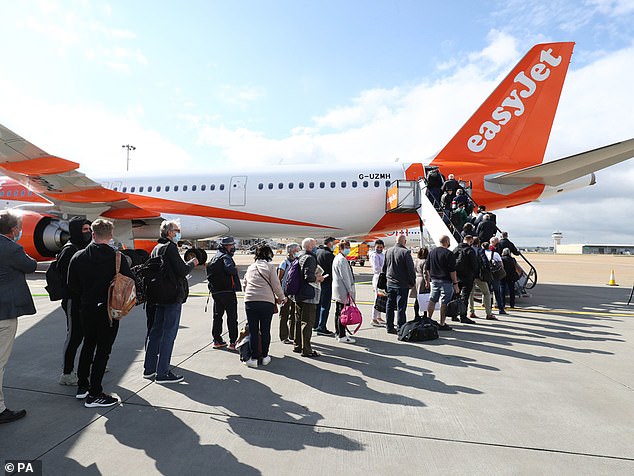 ‘Analysis has shown that 860,000 jobs of the 1.6million UK jobs in aviation, travel and tourism were lost or sustained only due to government furlough schemes since the pandemic started.’

Mr Lundgren said: ‘The Government has torn up its own rule book and ignored the science, throwing people’s plans into chaos, with virtually no notice or alternative options for travel from the UK.’

Union boss Mr Stratton said: ‘Our airlines need this summer season if they are to survive.’