The 10-year-old migrant boy who went viral in April after he was found abandoned and crying at the US-Mexican border, has been reunited with his mother at last, Dailymail.com can reveal.

Exclusive photos shared by his family show Wilton Obregon wearing a paper hat and grinning from ear to ear while posing with mom, Meylin, after being released from the Casa Padre children’s shelter in Brownsville, Texas on Friday.

In another shot, the Nicaraguan boy is seen donning a Batman t-shirt while holding a stuffed toy and a shiny blue model tractor at his feet.

While in a third he stands proudly, hand on hip, with a giant red fluffy bear and a large heart bearing the words ‘I Love You’.

The touching photos are a stark contrast to the heartbreaking images captured on a US Border Patrol agent’s bodycam that showed a lonely and terrified Wilton sobbing after being abandoned at the border in April when his mom was kidnapped by a Mexican cartel. 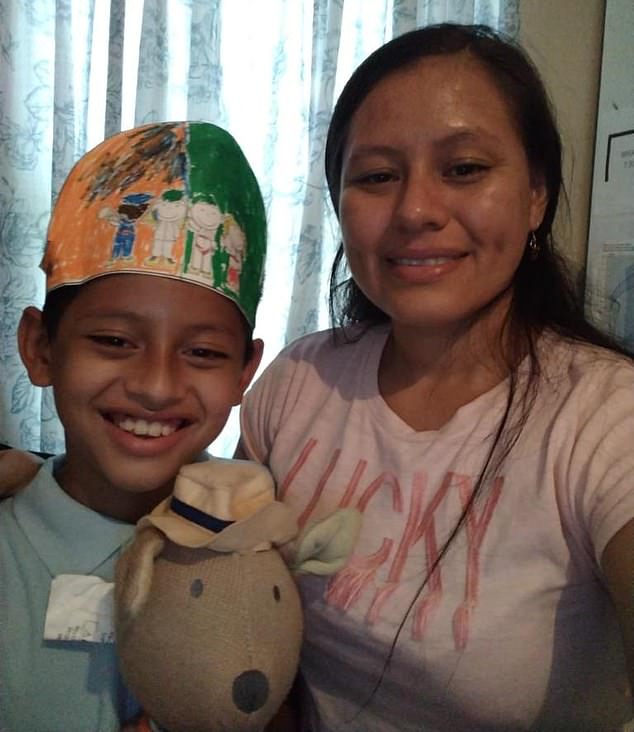 Ten-year-old Wilton Obregon was all smiles Friday after he was finally reunited with his mother, Meylin Obregon, nearly two months after he was abandoned at the border after she was kidnapped by the Mexican cartel 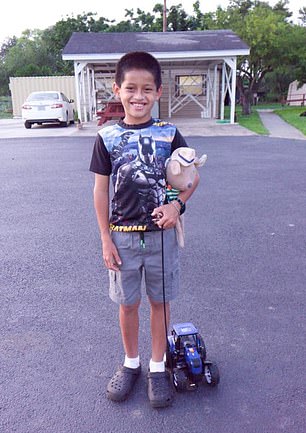 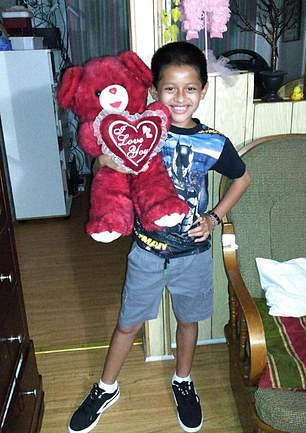 The Nicaraguan boy was photographed over the weekend after he was released from the Casa Padre children’s shelter in Brownsville, Texas, where he had been staying since he was picked up in April

The footage made headlines around the world amid the deepening border crisis in the US, which is seeing a growing flood of migrants paying cartel smugglers up to $9,000 to be ferried over the Rio Grande in flimsy rafts every night.

The new photos were taken over the weekend in the Brownsville area, where Wilton is staying with his mom who will decide where in the US they will wait out their asylum application.

Up until Sunday, the plan was for the mother and son to join her brother Misael Obregon in Miami.

Misael told Spanish television station Telemundo at the time: ‘Of course they are coming to stay with me.’

But those plans are now up in the air due to online haters that have made things difficult for the family, he told Dailymail.com in an exclusive interview.

Misael, who has been in Miami for five years, revealed: ‘Things have changed. My sister has the idea that she wants to live somewhere else, in the shade, where she will not attract attention.’

The carpenter, whose 15-year-old twin sons also recently crossed the border and are with him pending an asylum application, added: ‘She wants to be out of the spotlight.

‘A lot of people have criticized her, particularly on social media. She doesn’t want to be in the firing line of people attacking her.

‘I had planned to help Wilton start school, but we will have to see. Whatever, Wilton is so happy to be free now.’ 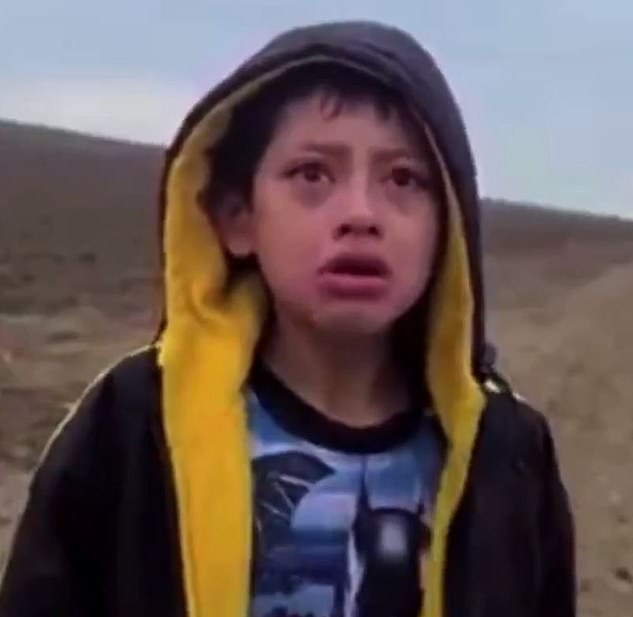 Misael was forced to raised $5,000 to free the boy after he was also snatched by the cartel with his mother.

The construction worker, however, could not afford to pay the ransom for his sister – who was eventually released and crossed over into the US.

He spoke of his joy at the pair reuniting, telling Telemundo: ‘I feel very emotional, my heart is beating with happiness.’

But he added: ‘For the people with bad intentions, that they were praying for my sister to return to Nicaragua with her boy… they are American citizens and I hope they never have to go through what we had to.’ 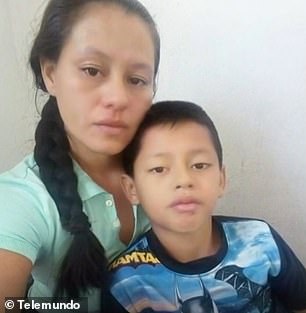 Wilton and his mother had tried to enter the US in March but were deported under Title 42, a pandemic-era policy that expels migrants without them allowing them to apply for protection

Wilton was discovered wandering on his own on April 1 in the dusty barren landscape near La Grulla, Texas, by a Border Patrol agent on his way home from a shift.

Crying and shaking as he approached the officer’s vehicle, he begged: ‘Can you help me? I was coming with group and they abandoned me. I don’t know where they are.’

When asked if he had been told to ask for help, Wilton replied between sobs: ‘No, I came because if not, where am I supposed to go?

‘Somebody could abduct me, kidnap me. I am scared,’ he added.

Wilton and his mother were seized by a cartel in northern Mexico during an earlier failed attempt to cross into the US.

They had crossed the border in March but were immediately sent back under Title 42, a pandemic-era policy that expels migrants without allowing them to apply for protection.

After Wilton’s ransom was paid, the people smugglers whisked him across the frontier into Texas where they abandoned him.

He was taken to a shelter run by the US Office of Refugee Resettlement, a division of Health and Human Services.

Meylin, meanwhile, was released by the cartel two weeks later and turned herself over to immigration officials to request asylum. She was later transferred to a migrant center in Texas.

She visited Wilton at the children’s refuge and was finally reunited with him properly nearly two months after he was picked up. 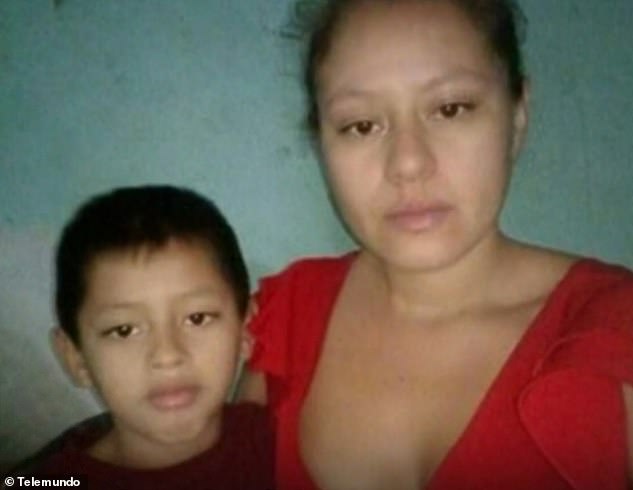 The two were later kidnapped by members of a Mexican cartel, who eventually released Wilton after his uncle paid his ransom. The boy was then smuggled into the US with a group of migrants who later left him behind in a desert area in Texas 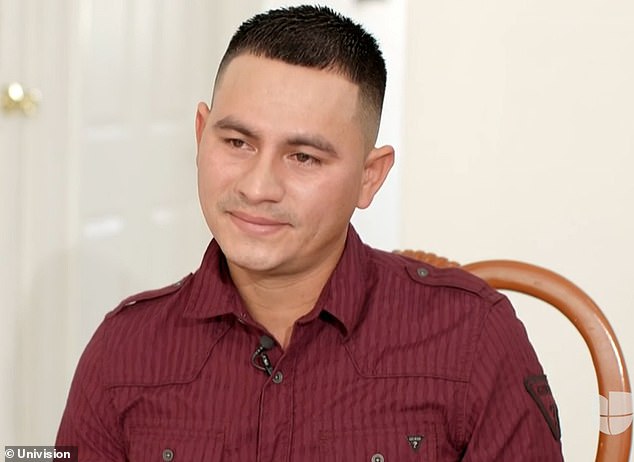 The boy’s uncle, Misael Obregon (pictured in April) was able to pay a $5,000 ransom to free Wilton after he was snatched by the cartel with his mother 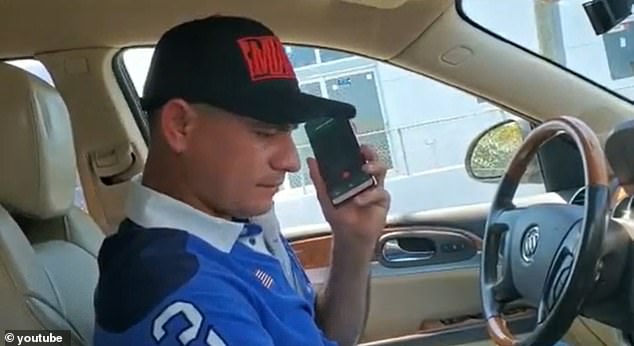 Misael was seen speaking to his nephew in a video where he asked him: ‘Would you like to go back to Nicaragua or do you want to come with me?’ The boy answered: ‘I don’t want to go back’

‘I felt fortunate and very happy because it was not like all the other times I went and returned without him,’ she told Telemundo.

‘On the other hand, today was a very special day for me because I no longer returned alone, I returned with my son. Today is the happiest moment of my life.’

Wilton said of the shelter: ‘I had friends there. I was happy there, but now being with my mother is more joyful.’

The publicity from the video sparked a battle over the boy’s custody, that at one point involved the Nicaraguan government.

Nicaraguan officials urged the US to return Wilton to his home located in an isolated mountain region of the country where his father Lazaro Gutierrez and other family members live.

They eventually abandoned the request and Wilton’s cattle farmer dad agreed the boy would be better off in the US with his mother.

The US Customs and Border Protection monthly report showed this was a 5,274 increase over March.

The April total was 10 times that of the same month last year, when 17,106 people were stopped by agents along the 1,954-mile southwestern border.

Border officers detained 17,171 unaccompanied children in the southwestern border region in April, down nine per cent from 18,890 in March when a record number of unaccompanied migrant children entered US custody.