Babies born to white mothers are almost four times more likely to be killed by drugs than those born to black and Hispanic women, CDC report finds

White mothers in the U.S. are nearly four times more likely to have an infant death involving drugs, a new report published on Thursday finds.

Between 2015 and 2017, 442 babies had a death in which drugs – such as cocaine, methamphetamine, opioids, naloxone, and cannabis were involved – according to the Centers for Disease Control and Prevention’s National Center for Health Statistics (NCHS).

Of those infant deaths, about 60 percent were the children of Caucasian women.

This figure is much higher than the roughly 20 percent of babies who were born each to black mothers and to Hispanic mothers. 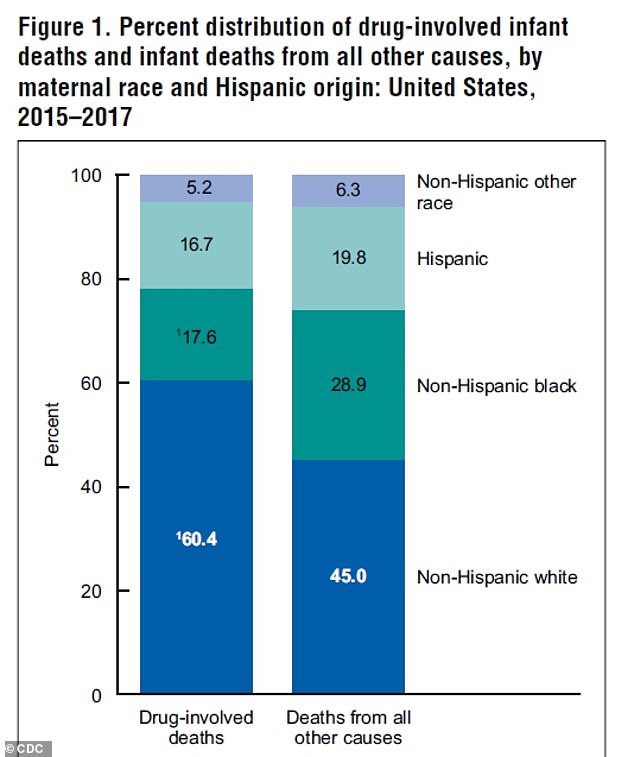 A new study from CDC found that 60.4% of babies who died from drug-related causes were born to white women, which is 3.5 times greater than the 17.6% of babies born to black mothers and the 16.7% born to Hispanic women

However, most research focuses on deaths among adults or teenagers, with few studies focusing on the involvement of drugs in infant deaths.

For the study, the NCHS team looked at death certificates from the National Vital Statistics System from 2015 to 2017.

‘Drug-involved deaths are defined as deaths that occur due to drug involvement as either the underlying or a contributing cause of death,’ the authors wrote.

‘Among infants, this could occur due to accidental or unintentional ingestion of selected prescription, illicit, or nonmedical-use drugs; maternal use of drugs; and other cases for which drugs were associated with the death.’ 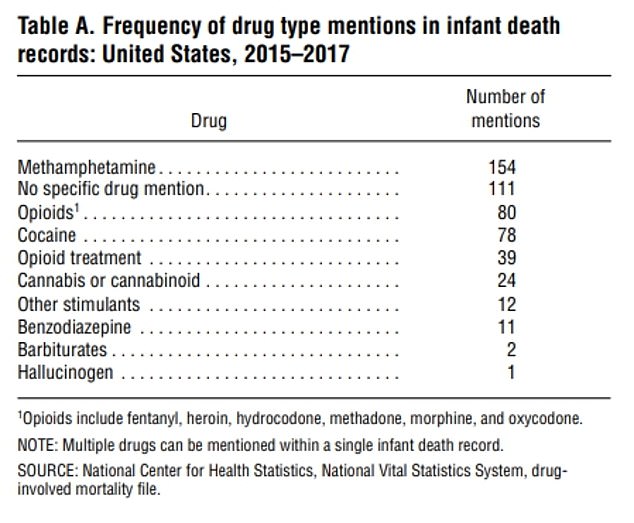 The most common drug listed on death certificates was methamphetamine, which had 154 mentions

Of the 68,609 infant deaths that occurred over the study period, 442 were identified as involving drugs.

The most common drug listed on death certificates was methamphetamine, which had 154 mentions.

The next most common were opioids – including  fentanyl, heroin, hydrocodone, methadone, morphine, and oxycodone – with 80 mentions followed by cocaine with 78 mentions.

When it came to breakdown by race, the team found that 60.4 percent of babies who died were born to white women.

That’s 3.5 times greater than the 17.6 percent for black mothers and the 16.7 percent for Hispanic women. 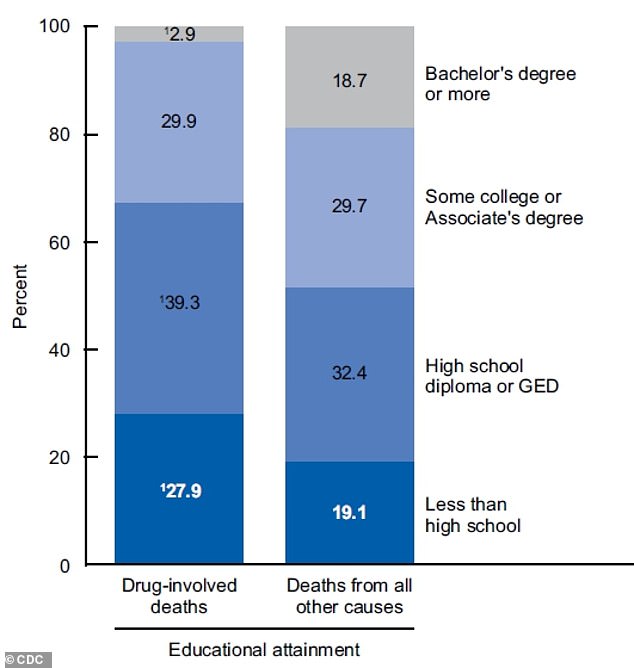 Mothers of babies who died due to drug involvement were also more likely to be less educated.

About two-thirds – 67.2 percent – of infants who died were born to women with a high school degree or less.

Comparatively, just 2.9 percent of babies who passed away were born to mothers with a Bachelor’s degree or higher.

Among the infants, researchers found that infants who died from drug-related causes were more likely to be born prematurely or have a low birthweight.

‘Linking birth and death certificate records provides additional key information on mothers and their babies, increasing understanding of these deaths,’ the authors wrote.

‘The findings in this report may help identify risk factors for drug-involved infant deaths and inform efforts to reduce these preventable deaths.’