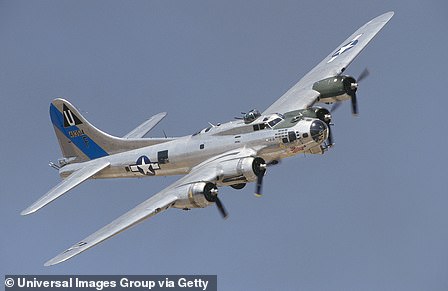 The Boeing B-17 was a four-engine heavy bomber developed in the US in the 1930s that became symbolic of the country’s air power during the Second World War.

Looking to replace Martin B-10, the USAAC (United States Army Air Corps) tendered a proposal for a multi-engine bomber that could reach an altitude of 10,000 ft and reinforce the country’s air capabilities.

Competing against two other aircraft manufacturers at the time  – Douglas and Martin – to build 200 bombers, the Boeing entry outperformed both competitors.

While Boeing lost out on the initial contract to Douglas because the company’s prototype crashed, the USAAC ordered a further 13 for evaluation, before it was eventually introduced in 1938 after numerous design changes.

Even before the war, the B-17 received recognition, with the nickname ‘Flying Fortress’ coined by a Seattle Times reporter.

But the bomber was mainly used during the Second World War in precision daylight bombing campaigns against military and industrial targets to weaken Nazi Germany.

In early 1940 the RAF entered into an agreement with the US to be provided with 20 B-17Cs, which were given the service name Fortress I. But their initial missions over Germany were unsuccessful.

But they were widely used by American forces in the Pacific and in a succession of raids targeting German factories.

In February 1944, the B17s flew a vital mission to destroy the factories that kept the Luftwaffe flying, in what was termed ‘Big Week’, and helped secure air superiority over the cities, factories and battlefields of Western Europe in preparation for the invasion of France in 1944.

The Luftwaffe found it easier to attack a Flying Fortress head on and Americans coined the phrase ‘Bandits at 12 o’clock high’ as a result.

German studies revealed that on average 20 hits with 20mm shells were required to gun down a B17. Forty B-17s were captured by the Luftwaffe.

In all, 3,500 B17s were involved in bombing raids on factories in Germany. 244 planes were lost in just a week but the back of the factories producing for the Luftwaffe were fatally broken.

The B-17s were also used in the War in the Pacific earlier in the Second World War where it conducted raids against Japanese shipping and airfield sites.

Many crew members who flew in B-17s received military honours, with 17 receiving the highest military decoration awarded by the United States, the Medal of Honour.

The B-17 went on to become the third-most produced bomber of all time, behind the four-engined Consolidated B-24 Liberator and the multirole, twin-engined Junkers Ju 88, and dropped more bombs than any other aircraft in World War II.

The plane was used in every World War II combat zone and by the end of production in 1945, Boeing had built over 12,000 bombers.

It dropped approximately 640,000 tonnes of bombs over Nazi Germany, over a third of the estimated 1.5 million tons of bombs dropped in total by US aircraft.

One of the most most famous B-17s, the Memphis Belle, was immortalised in a 1970 Hollywood movie of the same name. The bomber also featured in earlier films such as ‘Air Force’ and ‘Twelve O’Clock High’.

As of October 2019, there are 9 B-17 aircraft that remain airworthy, although none of them have ever flown in combat.

Dozens more remain in storage or on display is museums – the oldest being a D-series that flown in combat in the Pacific on the first day of World War II.