More than one million New Yorkers have now signed up for the state’s Excelsior Pass, the nation’s first vaccine passport.

The app has been used for people to visit restaurants and bars, stand-up comedy shows and even dance performances, according to The New York Times.

And while the number of Excelsior Pass sign-ups may seem large, it represents just one in nine of the adult New Yorkers who have completed their COVID-19 vaccination.

Health officials and New York State Governor Andrew Cuomo are working to increase the adoption of the Excelsior Pass, to get as many vaccinated New Yorkers as possible using it.

There are some privacy concerns about the pass, though, including concerns that people may be able to steal others’ data online to fraudulently obtain a pass.

It sees users download the NYS Wallet from their phone’s app store, then insert some personal details – including their date of birth, which type of vaccine they got, and when they got it to obtain a QR code.

That code serves as the passport, and can then be scanned by businesses requiring it using a different app and QR code reader. 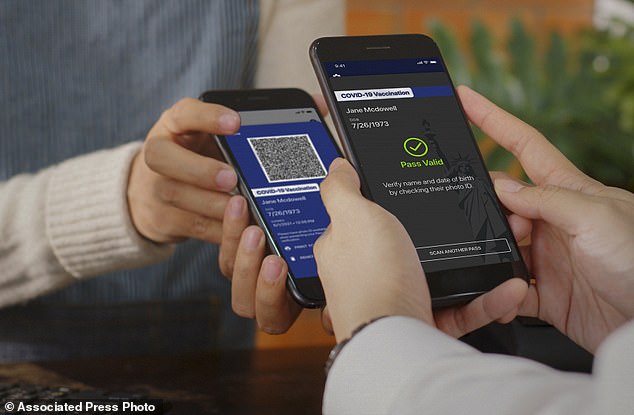 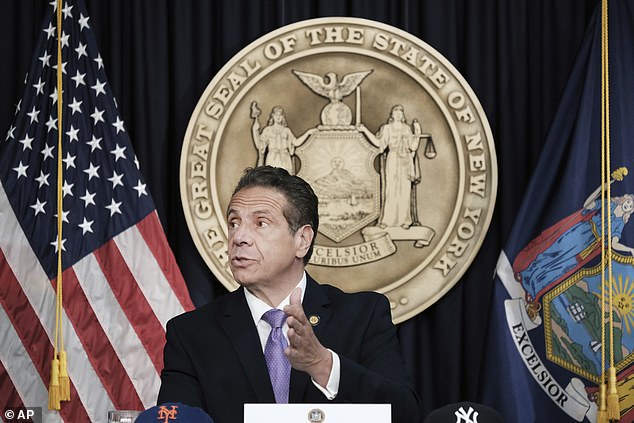 Gov Andrew Cuomo (pictured) lauded the Excelsior Pass, saying it is helping the state return to normal so people can attend restaurants, bars and performances

The one million users milestone is still one to take pride in, though, according to Cuomo.

‘After a long and incredibly difficult year, New Yorkers are finally returning to normal life and getting back to work amid rising vaccination rates, and the first-in-the-nation Excelsior Pass is a key part of that restoration of normalcy,’ he said in a statement.

‘The fact that we’ve so quickly achieved a milestone – more than one million passes issued – speaks to New Yorkers’ desire to resume many of the activities they’ve given up over the past year and is good news for bringing our economy back and building a stronger state for the future.’

‘New Yorkers are ready for the new normal, and the Excelsior Pass will help them get there until we can defeat this terrible pandemic for good.’

The Excelsior Pass is available to all New Yorkers and can be downloaded on any device.

The QR code officially considers a person vaccinated and safe from COVID 15 days after the final shot of their vaccine. 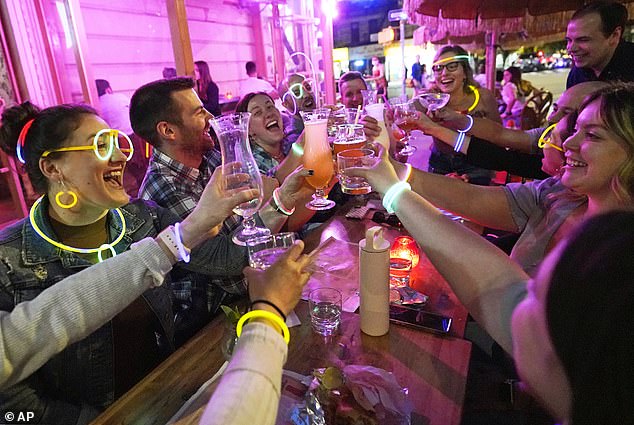 New Yorkers – such as these drinkers at an Upper West Side bar – are enjoying socializing again after COVID restrictions were lifted, with some venues asking to see a vaccine passport first

Any business is allowed to require vaccines in order to allow customers to patronize their business, but they are also required to accept the paper vaccination records as they do the digital versions.

According to a report from The Times, Exclesior Pass has been used for people to attend anything from a John Mulaney stand-up performance at City Winery in Manhattan to a speakeasy bar in the upstate city of Troy.

To use the app, anyone can enter their name, date of birth, date of vaccination and the type of shot they received is all someone needs to register for the pass.

Due to the popularity of Americans posting their paper vaccine cards to social media, anyone can lift information off of another persons card and register for the Excelsior Pass themselves.

The same person can be registered on as many devices as they would like.

While this loophole should be closed, as those checking the pass at the door of an establishment should also be checking a person’s ID, that step is sometimes skipped, according to the Times.

This raises a privacy concern as anyone is able to lift information from anyone else, and use them for their vaccine passport.

Privacy concerns have also been one of the main concerns many have had in using vaccine passports.

A survey published this week by USARx found that more than 40 percent of Americans had privacy concerns with the vaccine passports, with both Democrats and Republicans expressing worries.

Around a third of Americans also worried about their data not being secure. 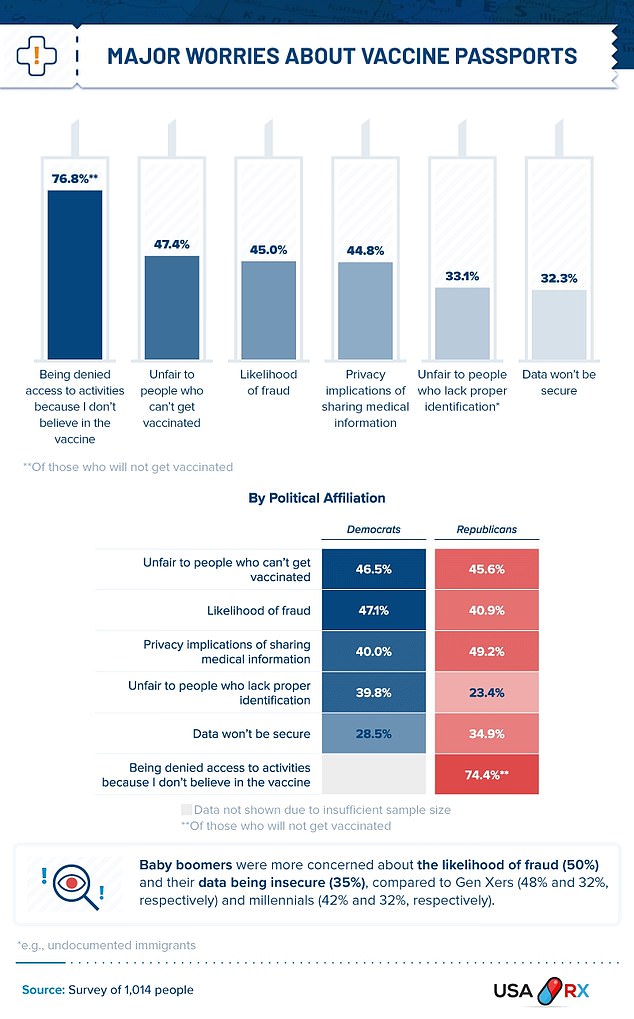 There have also been issues with data verification when using the passes.

Around four percent of people who attempted to register for the pass could not do so, according to a Excelsior Pass spokeswoman.

Some people have had to use older addresses or zip codes in order to get their pass working for them, as state records may not yet have the most updated information.

While they have been largely accepted and utilized in the more liberal-leaning New York City, in the conservative areas of Upstate New York, some businesses who have required vaccine passports have been met with derision, per The Times.

‘It is very polarizing,’ Gretchen Christenson, the owner of a coffee shop in Auburn, New York, told the newspaper

‘They have been calling us Hitler and fascists, “Segregation Cafe.” I think the number of people against it is tiny, but they are just extra loud and threatening.’

The USARx survey also found that around 75 percent of Democrats across the country were supportive of the use of passports, with less than half of Republicans in support.

Some Republican-voting states – including Florida and Texas – have even banned them.

Around 60 percent of American’s in total support the use of vaccine passports in the United States, with about half saying the passports were necessary in order to end the pandemic.

New York City will fully reopen on July 1, meaning businesses will be allowed to open at full capacity with no masking or social distancing mandates.

Businesses will still be allowed to require vaccine passports in order to protect their staff and customers if they choose to do so, though.