The 21-year-old Boston Celtics fan accused of throwing a water bottle at Brooklyn Nets star Kyrie Irving made his first court appearance since his arrest on Wednesday, pleading not guilty to a charge of assault and battery with a dangerous weapon.

At Wednesday’s arraignment at Boston Municipal Court, Cole Buckley of Braintree, Massachusetts was ordered by a judge to stay away from the Celtics’ arena, TD Garden. He could face a permanent ban after he was seen throwing an empty, plastic water bottle at Irving, a former Celtics player who angered Boston fans with accusations of racism.

Buckley was released on the $500 bail he posted Sunday following his arrest. His attorney had tried to postpone the arraignment, but was denied. Buckley did not speak with reporters on Wednesday. 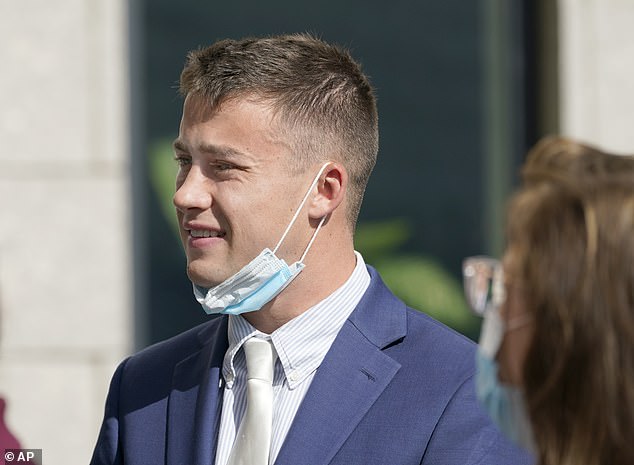 Cole Buckley, 21  waits in line, Wednesday, June 2, 2021, to go into Boston Municipal Court, where he was arraigned on charges of assault and battery with a dangerous weapon

Suffolk County District Attorney Rachael Rollins did attend the hearing, and later told media that she considers the crime to be racially motivated while admitting that there is not enough evidence to change Buckley, who is white, with a hate crime.

‘It is not lost on me that he chose to do this in a sport that is overwhelmingly Black men,’ Rollins said, as quoted by Boston’s CBS affiliate. ‘We are not going to allow this trend to continue. Period. End of story. We have not charged him with a race-based hate crime but you don’t get to behave this way.’

‘If I showed up at your job and threw a bottle at your head and it hit you or grazed you you would want me to charge a felony on that and I would.’

Buckley is due back in court on August 5 for a pre-trial hearing.

The incident occurred on Sunday after Irving punctuated the Nets’ win by repeatedly stepping on the Celtics’ mid-court logo. (The Nets clinched the first-round series with a win in Brooklyn on Tuesday)

Afterwards, Irving made his way to the tunnel, which is when the empty bottle was seen falling from the stands above. Irving’s teammates quickly identified Buckley, pointed him out to police.

‘People just feel very entitled out here,’ Irving said after the game. ‘They paid for the tickets.

Great. I’m grateful they’re coming in to watch a great performance. But we’re not at the theater. We’re not throwing tomatoes and other random stuff at the people that are performing. It’s too much. And it’s a reflection on us as a whole.’

‘It’s unfortunate that sports has come to this crossroads where a lot of old ways are coming up,’ he added.

‘It’s been that way for entertainment for a long time with underlying racism and just treating people like they are in a human zoo.’

Prior to Games 3 and 4 in Boston, Irving said he hoped to avoid any ‘subtle racism,’ echoing complaints of other African-American athletes against the city.

‘I am just looking forward to competing with my teammates and hopefully, we can just keep it strictly basketball; there’s no belligerence or racism going on — subtle racism,’ Irving said during a video press conference following the Nets’ Game 2 win on Tuesday.

‘People yelling s**** from the crowd, but even if it is, it’s part of the nature of the game and we’re just going to focus on what we can control.’

A former Celtics guard who once predicted he’d sign a long-term deal to stay in Boston before joining Brooklyn in 2019, Irving told reporters that he’s ‘not the only one that can attest’ to the city’s racism.

And when prompted by someone off-camera, the grinning 29-year-old added: ‘the whole world knows it.’

Irving is not the first athlete to accuse the Boston area of racism.

Another black centerfielder, Torii Hunter, revealed in 2020 that he had been called the n-word ‘100 times’ at Fenway Park and once had a bag of peanuts thrown at him in the outfield. He even inserted a clause in several contracts, prohibiting clubs from trading him to Boston.

Celtics legend Bill Russell saw his house vandalized with racist graffiti in a suburb of the city in 1966 — the same year he was promoted to player-coach to become the first black head coach in major North American sports.

Later he called the city a ‘flea market of racism’ and insisted in 1972 that his number be retired in a private ceremony at Boston Garden because he didn’t want to do the proceedings in front of the fans.

Irving’s previous returns to Boston came this season, during the pandemic, so fans were not in attendance.

The city has a love-hate relationship with the former Celtics star.

Irving endeared himself to Boston faithful by interacting with fans, signing autographs, giving away his sneakers to spectators after games, and promising to re-sign with the Celtics in February of 2019.

That summer, however, he and former MVP Kevin Durant decided to team up in Brooklyn, and Boston signed oft-injured All-Star Kemba Walker to fill Irving’s role in the Celtics’ backcourt.

Now, Irvin and the Nets hold a 2-0 lead against a Boston team that is without injured All-Star Jaylen Brown (wrist surgery) and is coming off a 22-point loss.

Boston’s racial divisions became national news in the 1970s as the city began busing black students to white neighborhoods in an attempt to integrate the institutions.

Riots routinely broke out during anti-busing protests. During one incident in 1977, civil rights attorney Ted Landsmark was photographed being speared by a white teenager using an American flag. The picture ultimately won a Pulitzer Prize.

The city is currently being run by its first black mayor, Kim Janey, who took over when Marty Walsh was appointed President Joe Biden’s Secretary of Labor. Janey has vowed to lead ‘Boston through a lens of equity, justice, and love.’