‘You can get your Facebook moment’: Brutal moment Allison Langdon shuts down senator as she unleashes on ‘shambolic’ vaccine rollout and ‘outrageous’ decision to lock down all of Victoria over Covid outbreak

Allison Langdon has slammed the federal government over their ‘shambolic’ handling of the Victorian outbreak after the aged-care minister admitted to not knowing how many staff members were vaccinated.

The state’s cases climbed to 54 on Tuesday, with confirmation an aged-care patient and two workers had tested positive for coronavirus – with neither staffer having been vaccinated.

The Today host unloaded on Scott Morrison’s cabinet on Wednesday morning, saying they had ‘failed to answer the most basic questions’.

‘We’ve still got thousands of aged-care workers and residents unvaccinated,’ she said.

‘I thought it was shambolic yesterday listening to Aged-Care Minister Richard Colbeck admiting in Parliament he still doesn’t know how many had been given the jab.’ 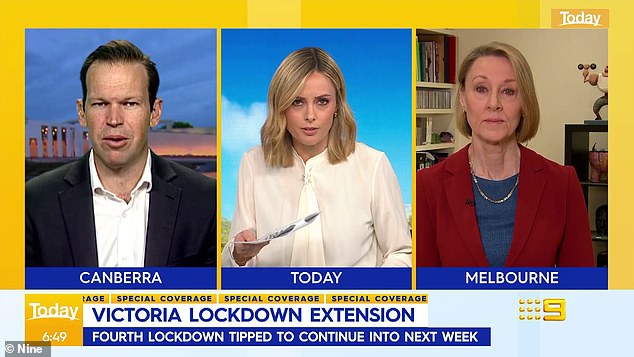 Senator Katy Gallagher in a senate estimates hearing Tuesday questioned Colbeck’s ability to do the job after he was unable to recite relevant statistics related to the vaccine roll-out for frontline workers and at-risk patients.

‘You have been unable to roll-out this vaccination for residents or staff in aged-care along the lines it should have been done,’ she said.

‘Well Senator, you can get your Facebook moment, that’s fine,’ he replied.

Langdon asked Queensland Senator Matt Canavan if Colbeck should be sacked as a result of the debacle, asking: ‘How do they not know that stuff?’

‘The figures I’ve seen are reported on an aged-care basis, not just workers per say,’ he replied.