Former President Barack Obama took credit for President Donald Trump’s economic success saying it came from the ‘stability and the growth that we initiated’ and said President Joe Biden is ‘essentially finishing the job.’

Obama was talking to journalist Ezra Klein for his New York Times podcast about whether partisanship has taken over or Americans could be persuaded to vote differently based on policies the party or candidates support.

‘I think it’s not as immediate,’ Obama answered, explaining that some people might be confused about what policies they’re seeing benefits from – pointing to the Trump economy as a prime example. 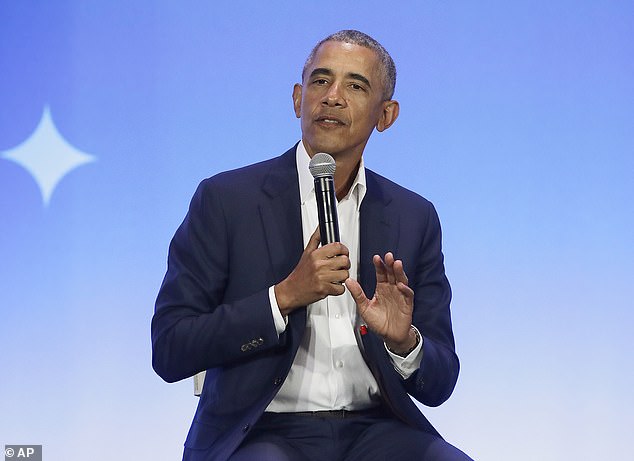 Former President Barack Obama said in a podcast interview with Ezra Klein that President Donald Trump’s economy ‘had nothing to do with Donald Trump’s policies,’ but instead was a continuation of the Obama economy 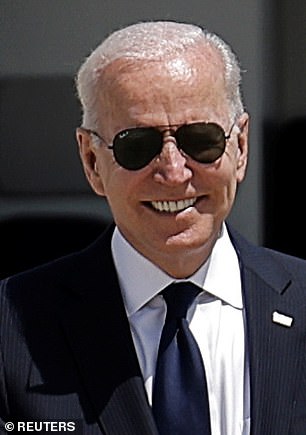 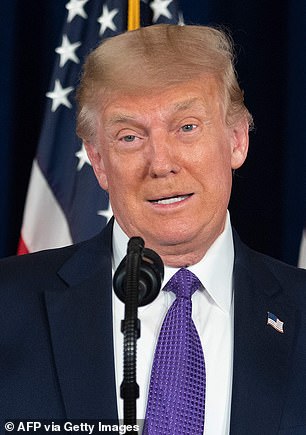 ‘I think that what we’re seeing now, is Joe and the administration are essentially finishing the job,’ Obama said about President Joe Biden’s (left) administration, not giving President Donald Trump (right) any credit for the pre-coronavirus economy

‘Now I would argue, and I think a lot of economists that I know would suggest, that mostly that had nothing to do with Donald Trump’s policies, and mostly had to do with the fact that we had put the economy on a footing where he essentially just continued the longest peacetime recovery and sustained job growth in American history,’ Obama said.

Obama pointed out how the economy had been in freefall when he got elected, thanks to the 2008 financial crash, but had been humming along by the 2016 presidential race.

‘And the truth is that if Donald Trump doesn’t get elected – let’s say a Democrat, a Joe Biden or Hillary Clinton had immediately succeeded me, and the economy suddenly was 3 per cent unemployment, I think we would have consolidated the sense that, oh actually these politices that Obama put in place worked,’ Obama said.

‘The fact that Trump interrupts essentially the continuation of our policies, but still benefits from the economic stability and growth that we had initiated, means people aren’t sure,’ the former president continued.

Obama added, ‘If you’re the average voter you’re kind of thinking, well, you know, looks like Republican policies are working for me to some degree.’

Obama explained that’s why he believed Trump was able to make inroads ‘among non-white voters,’ who typically would have voted for the Democratic nominee.

Trump, for instance, saw improvements among Hispanic voters in Florida, which helped him win that state.

‘So that clouds what I think would have been a more impactful shift in political views toward Democrats as a result of my presidency,’ he added.

Biden’s administration, Obama believed, could have a more permanent effect.

‘I think that what we’re seeing now, is Joe and the administration are essentially finishing the job,’ Obama said. ‘And I think that’s an interesting test.’

Obama pointed to a number of policies that the Biden administration is building on – such as the Affordable Care Act – Obama’s signature healthcare law – rejoining the Paris climage agreement – negotiated during Obama’s tenure.

‘If they’re successful over the next four years, as I think they will be, I think that will have an impact,’ Obama said. ‘Does it override that sort of identity politics that has come to dominate Twitter, and the media, and that has seeped into how people think about politics? Probably not completely.’

‘But at the margins, if you’re changing 5 per cent of the electorate, that makes a difference,’ Obama continued.

Obama also gave himself some credit for keeping millennials and Gen Zers in the Democratic Party.

‘I think my presidency helped to solidify a huge tilt in the direction of progressive politics among young people that is now continuing into their 30s,’ the ex-president said.

Obama talked extensively with Klein about the new partisan reality.

He recalled being able to campaign in 2007 and 2008 as a relatively unknown U.S. senator.

‘The prototypical example is I show up in a small town in Southern Illinois, which is closer to the South than it is to Chicago, both culturally as well as geographically,’ Obama said.

‘And usually, the local paper was owned by a modestly conservative, maybe even quite conservative usually, guy. He’d call me in. We’d have a cup of coffee. We’d have a conversation about tax policy, or trade, or whatever else he cared about,’ Obama said. ‘And at the end of it, usually I could expect some sort of story in the paper saying, ‘Well, we met with Obama. He seems like an intelligent young man. We don’t agree with him on much. He’s kind of liberal for our taste, but he had some interesting ideas.”

‘So then I could go to the fish fry, or the V.F.W. hall, or all these other venues, and just talk to people. And they didn’t have any preconceptions about what I believed. They could just take me at face value,’ he said. ‘If I went into those same places now – or if any Democratic who’s campaigning goes in those places now – almost all news is from either Fox News, Sinclair news stations, talk radio, or some Facebook page. And trying to penetrate that is really difficult.’

Obama also pointed out the evolution of the Republican Party noting how while George H.W. Bush and George W. Bush, versus Bill Clinton and Obama, might have slightly differed in approach on the handling of a pandemic and vaccines.

‘It’s hard to imagine a previous Republican administration completely ignoring science, right?’ Obama said of Trump, who didn’t care much for masking and held superspreader events.  ‘So that is a fundamental shift.’

‘And I think people’s identities have become far more invested as a result in which side are you on politically. It spills over into everyday life,’ Obama continued, noting that he ‘small issues’ today have become political.

Obama also pointed a finger at the media, saying that he-said, she-said journalism of balancing the two political sides, ‘taught somebody like Mitch McConnell that there is no downside for misstating facts, making stuff up, engaging in out-and-out obstruction, reversing positions that you held just a few minutes ago.’

He said the journalism wasn’t reaching the public ‘in a way where the public could make a judgment about who’s acting responsibly and who isn’t.’

‘I think that the media was complicit in creating that dynamic in a way that understandably is difficult, because, as we discovered during the Trump administration, if an administration is just misstating facts all the time, it starts looking like, gosh, the media’s anti-Trump,’ Obama also pointed out. ‘And this becomes more evidence of a left wing conspiracy and liberal elites trying to gang up on the guy.’