The first ever drug to slow deterioration in brain function from Alzheimer’s disease might receive approval for use from the U.S. Food and Drug Administration (FDA) this week.

Aducanumab is a medication developed by the company Biogen, based in Cambridge, Massachusetts, and meant for mild cognitive disability or early-stage dementia caused by Alzheimer’s.

The FDA has until June 7 to make a landmark decision on the future of the drug after a rollercoaster few years of development and trialing.

Patients with Alzheimer’s says aducanumab has helped them and improve symptoms such as brain fog, making it the first Alzheimer’s drug approved since 2003.

But some dispute the drug’s effectiveness and say the science on whether or not it actually works in shaky. 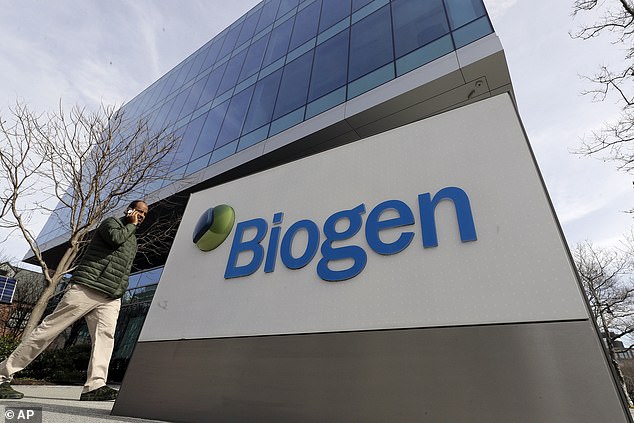 Aducanumab, developed by Biogen, may be the first ever drug that can slow the cognitive decline of Alzheimer’s. Critics believe more testing is needed before it gets approval from the FDA, though, due to ambiguous clinical trial results

The drug is a monoclonal antibody that creates an immune response that attacks clumps of amyloid beta, a plaque which scientists believe damages and kills brain cells.

It’s the plaque that causes Alzheimer’s to deteriorate a patients cognitive ability over time.

Biogen launched two clinical trials for aducanumab in 2016, according to The Washington Post.

Both were stopped mid-way through because researchers concluded that neither trial would end up reaching its goal.

Later, the company revealed updated data from the second study that showed a study patients had 22 percent decrease in speed of their cognitive decline.

The company is hoping the data from the trial will be enough for the FDA to give approval for use because a third trial may take between four to six more years to complete.

Advocates say that while the drug is not perfect, it can be the help delay the cognitive decline in the more than six million Americans who have Alzheimer’s.

The drug getting approval could also be a foothold for future research into developing treatments for the condition.

‘This will give us a new biological foothold to build on,’ Stephen Salloway, director of neurology and the Memory and Aging Program at Butler Hospital, told The Post.

‘To get the best in class, you have to have the first in class.’

The Alzheimer’s Association is supportive of the drug as well, hoping that it can provide temporary health for patients, while also calling for further trials to be conducted on the drug even after approval.

‘We don’t think this is the end all or be all,’ Harry Johns, president and chief executive of the Alzheimer’s Association, told The Post.

‘It will take more advances, but it does appear from the science that people, especially at early stages, could be real beneficiaries and that the benefits accumulate over time.’

Critics of the drug say that giving the drug approval too early could hurt patients more than it will help, due to the wasted time and resources that may go into delivering a product that does not work.

They also criticize Biogen’s data conclusion of the second trial, describing it as finding a conclusion then building the process to get there backwards in order to get the results they wanted.

‘The worst thing for people with Alzheimer’s would be to put out a product that doesn’t work,’ Aaron Kesselheim, a professor of medicine at Harvard Medical School, told the newspaper.

‘It will be sold at an extremely high price and waste resources that could go to other things.’

It is estimated that the drug will cost $50,000 per year per patient that uses it, a large price tag for a drug whose effectiveness is still questionable.

Howard Fillit, founding executive director and chief science officer of the Alzheimer’s Drug Discovery Foundation, believes that more work is needed to determine the effectiveness of the drug as well.

‘There is tremendous pressure on the FDA from the Alzheimer’s community, but in this case, I think the science is unfortunately somewhat ambiguous,’ he said.