Cailtyn Jenner did not vote for Donald Trump’s reelection in 2020, opting to skip out on voting altogether and play golf instead.

‘I didn’t even vote,’ Jenner told CNN’s Dana Bash in a pre-taped interview from her home in Malibu that aired Monday night. ‘Out here in California, it’s like, why vote for a Republican president? It’s just not going to work. I mean, it’s overwhelming.’

‘It was voting day and I thought the only thing out here in California that I worry about, which affects people, is the propositions that were out there,’ she said. ‘And I didn’t see any propositions that I really had one side or the other. And so it was Election Day and I just couldn’t get excited about it. And I just wound up going to play golf and I said, ‘I’m not doing that.’ ‘

Jenner, a transgender woman, voted for Trump in 2016, but has said she stopped supporting Trump halfway through his term due to his stances on trans issues. In March 2018, Trump signed an executive order banning those who have undergone sex change survey from serving in the military.

The 71-year-old gold medal winning Olympian and reality TV star announced last month that she is running for governor in California in the almost assured recall election of Governor Gavin Newsom. 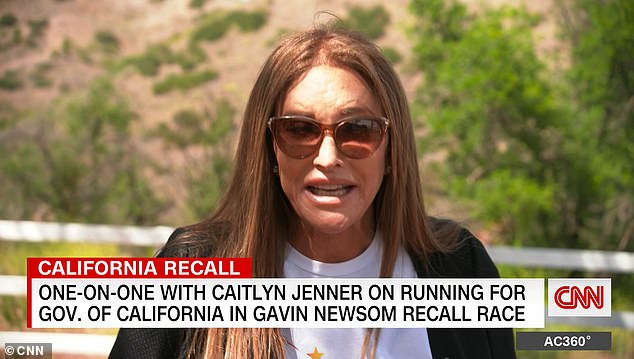 Caitlyn Jenner told CNN that she didn’t vote in the 2020 election, but went golfing instead

Jenner reiterated to CNN that she doesn’t label herself as a ‘Republican,’ although she is ‘kind of on the Republican side.’

Jenner says she doesn’t agree with former President Trump that the 2020 election was ‘stolen,’ but insisted California – and other states – need to return ‘integrity’ to the election system.

‘He is our President. I respect that,’ Jenner said of President Joe Biden when asked whether Biden was ‘duly elected.’

‘I realize there’s a lot of frustration over that election. You know what? I’m frustrated over what happened back then,’ she told CNN.

‘We are a democratic republic; we need to have integrity in our election system.’

During her first interview after announcing her candidacy on April 23, Jenner told Fox News’ Sean Hannity that she isn’t running as a Republican but rather as a ‘thoughtful disruptor.’

‘I have common sense, I see what is going on,’ she told the conservative host. ‘I have always been on the Republican side as I have conservative economic values. Socially I have been much more progressive all my life. I get it. People need help.’

‘But you can’t have social programs without a strong economy.’

She added: ‘I can get along with everyone. I don’t care if you are a Republican, Democrat, Libertarian, vegetarian.’

Jenner has been in the public eye almost all her life, including as a decathlon Olympian and later as a reality TV star on Keeping Up With the Kardashians. During the course of the 20 season show, Jenner got divorced from wife of 23-years Kris and in the same years as the divorce in 2015 came out as trangender.

Jenner has never ventured into politics – until now.

She defended her lack of government experience to CNN, claiming she is surrounding herself ‘with some really good people.’

‘I have been in the entrepreneurial world,’ Jenner told Bash. ‘People think – you’ve been in show business, think of you as a reality star. Certainly, I’ve done that, but entertainment is a business, and you have to run that business.’

She added: ‘But I’ve also done other things.’

‘We sold a billion dollars’ worth of exercise equipment on television. I’ve had aviation companies. I’ve just always been involved being an entrepreneur and tried to inspire my children to do the same thing. And they’ve done very well in that department,’ Jenner said.

There are several prominent Republicans challenging Newsom for his seat in the statehouse.

The recall election has not been officially called or scheduled, but is almost sure to occur after the 1.495 million-signature threshold was reached and surpassed.

Newsom, 53, has been governor of California since January 2019 and started facing widespread calls for being ousted from office due to his response to the coronavirus pandemic.