New bodycam footage shows the moment a Washington DC cop crashed their car after allegedly drag racing with another cop at almost 50mph, practically double the speed limit in the residential neighborhood.

The incident took place back on April 22 around 5:15pm, for which the two drivers are now facing reckless driving charges.

Video released last week shows the passenger in one of the officer’s Ford cruisers on the day in question. They are sitting still before the cop in the driver’s seat gives a thumbs up and puts the car into drive.

The car starts moving forward, quickly picking up speed as the driver says something on the radio – the sound in that moment is muted to viewers. 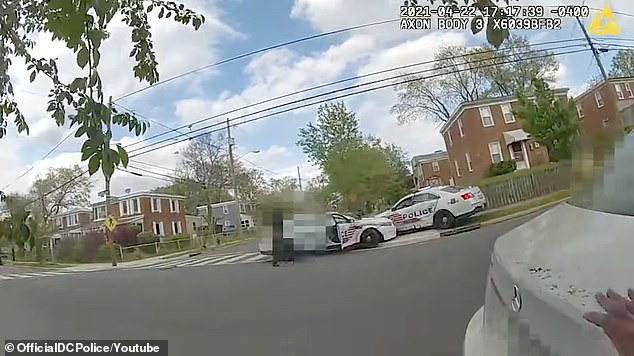 The car hits at least one bump, then seconds later, the car bumps again, which is when the crash happens and forces the airbags in the car to deploy.

The cop in the passenger seat groans several times as he exits the vehicle, before somebody asks off-camera if one of the people involved are okay.

‘S***,’ the passenger says, with someone asking if he’s okay. ‘Yeah, I’m good. Oh, f***,’ he responds as he slowly walks across the street, asking for the other people involved to be checked on.

Meanwhile, the two cop cars can be seen facing one another, with one firmly on the sidewalk following the crash, which occurred when one vehicle allegedly cut off the other. 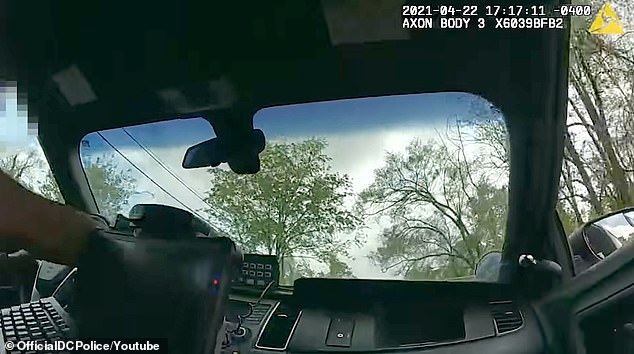 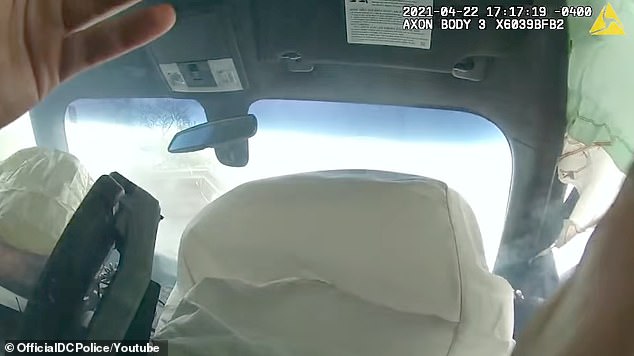 The car begins accelerating quickly, before seemingly rocking and crashing 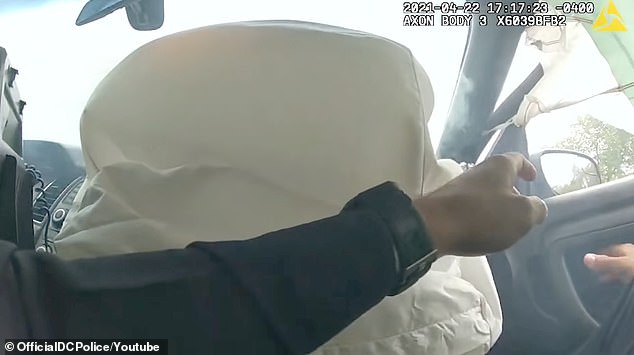 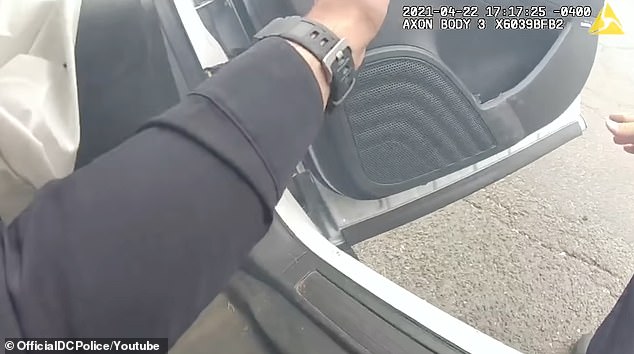 The District Attorney General is now charging the two drivers with reckless driving and other cop has been fired from the force because of the incident.

Khan and Millington were in court on Monday and will have to return to court on June 22, according to WUSA9.

Four officers were injured from the crash and treated locally, while $21,718.66 in damage was done to the cop cars.

No other injuries were reported to civilians.

One of the police officers who was a passenger was fired prior to May 3, although it’s not clear if it was their bodycam footage – their name has not been released. 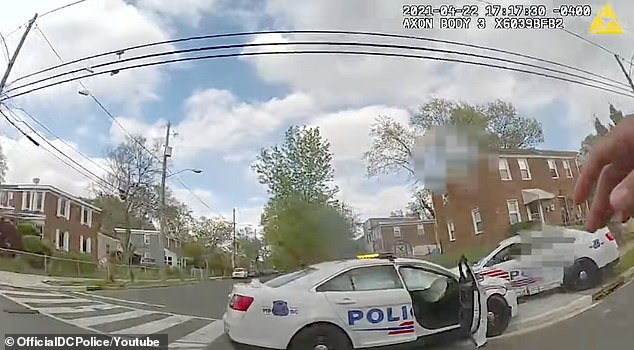 The cop cars can be seen facing each other after the crash, showing the damage 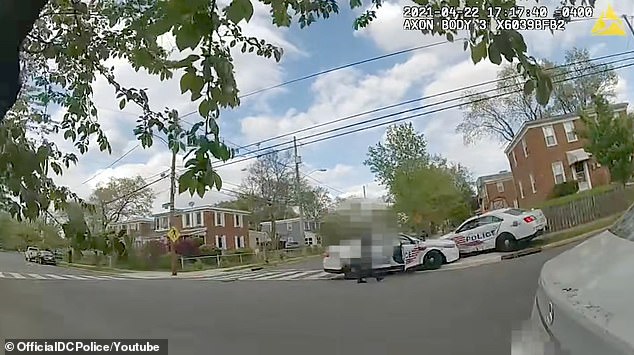 In total, over $20,000 in damage was done to the cop cars, though no civilians were injured

7News reports that the fired cop was a probationary officer.

It’s unclear if the fourth officer involved in the incident will be charged or fired in connection to the crash.

At the time of the probationary cop’s firing, acting DC Police Chief Robert Contee said the other officers were being investigated.

‘The other individuals that are involved are part of the internal affairs investigation that will be going over to the Office of the Attorney General for their judicial review to make a determination on what the next steps will be – if there will be any charges that come out of this investigation,’ Contee said at the time.

He also expressed his disappointment with his officers during a press conference last week, according to FOX 5 DC.

‘Obviously those types of things are unacceptable, they’re embarrassing,’ Contee said. ‘It’s not something that we tolerate. It’s certainly something that I would not tolerate as the Chief of the Metropolitan Police Department.’ 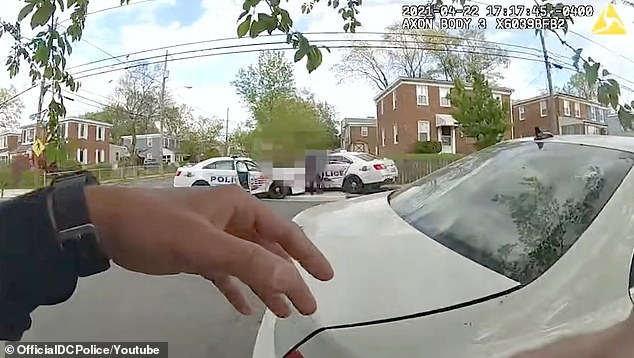 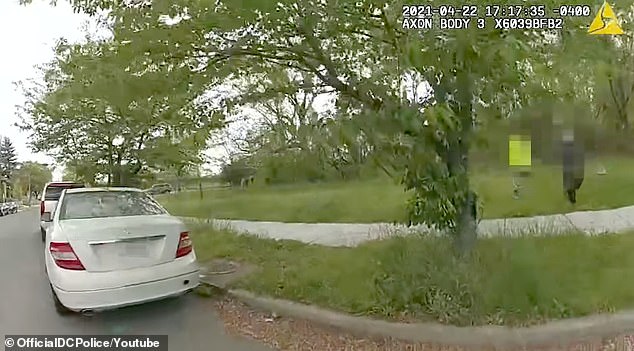 They eventually backed their way to the other side of the street, clearly shaken by the crash

The cops were initially believed to be driving up to 60mph, though a Crash Data Retrieval report shows the vehicles hitting high speeds of 48 to 49mph prior to the crush, still nearly double the 25mph speed limit.

‘The streets, roadways, and avenues of the District connect us to our families and friends, get us to and from work, and bring our community closer together – that’s why it’s imperative for my office to enforce our traffic safety laws,’ Attorney General Karl Racine said.

An affidavit stated that the drag race lasted two-tenths of a mile, according to WDVM.

The affidavit said: ‘Both vehicles carelessly and heedlessly proceeded south on Anacostia Avenue, accelerating to speeds that displayed a wanton disregard for the safety of both persons and property.’

Racine added, ‘When people threaten public safety and the residents of the District by driving recklessly on our roadways, we hold them accountable.’

Racine isn’t the only person taking the cops to task, with 6D Commander Durriyyah Habeebullah ripping the officers right after the accident. 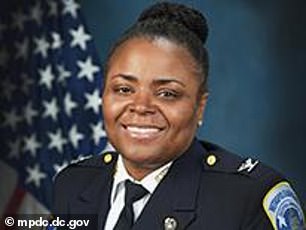 ‘Yesterday two 6D scout cars were totaled because officers decided instead of fighting crime, patrolling their beats, or engaging the community – they decided to drag race each other on Anacostia Avenue at 5 pm in the evening,’ Habeebullah wrote in an internal email obtained by FOX 5 DC.

‘What does this say to all the members of MPD who are passionate about their job and work hard every day to make a difference. This is not fair to any of us,’ the email continues.

She said the officers were ‘stupid’ and ‘irresponsible.’

‘This is our community, people walk over there. It’s a small community,’ said Jennings.