By Crystal Jones For Mailonline

Vile vandals have dubbed a grave for stillborn babies with obscenities referring to conspiracy theories.

A memorial and gravestones were defaced with thick white spray-paint which read: ‘one less rat’ and ‘f*** yous’.

Another read: ‘Covid hoax’ across the stones commemorating the names of babies who had died at birth.

The marble plaque reads: ‘For All Our Babies Briefly Known Forever Loved’. 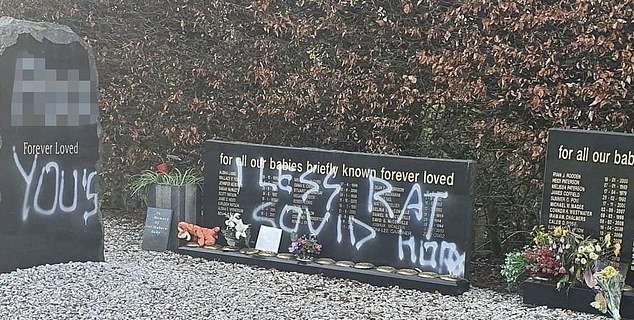 One plaque which reads: ‘Forever Loved’ had graffiti slewn across stating an obscenity. Another is spray painted with the words: ‘One less rat covid hoax’ at the Snowdrop Memorial Garden for stillborn and neonatal deaths in Dunfermline, Fife, Scotland

Other gravestones in the cemetery were painted in vile graffiti too. One with flowers left for a ‘mum’ and ‘gran’ was vandalised with the word ‘scum’

The graffiti was discovered on Saturday May 1 in Snowdrop Memorial Garden for stillborn and neonatal deaths in Dunfermline, Fife, Scotland.

Pictures of the distressing vandalism was shared on social media, sparking a slew of outrage and horror.

One grieving parent posted a picture on Twitter in a heart-breaking post and was met with thousands of comments of anger and shared grief.

The dad wrote: ‘I’ve been sat all day in bits trying to process this and I just can’t understand why. 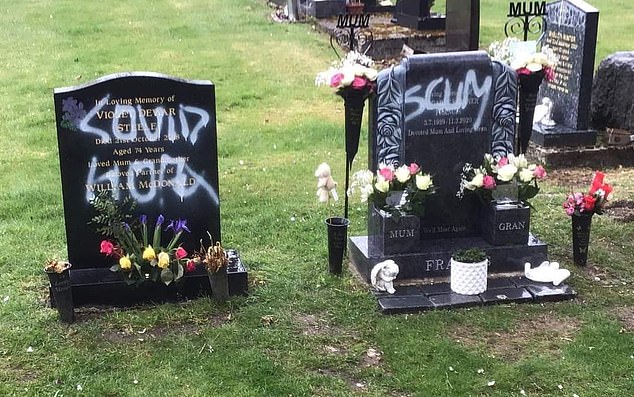 Other gravestones in the cemetery were painted in vile graffiti too. One with flowers left for a ‘mum’ and ‘gran’ was vandalised with the word ‘scum’

‘This is my baby boys memorial and it was vandalised last night. I am never short of words but really struggling to understand this.’

Other horrified users commented things such as: ‘OMG I am so deeply sorry for you and your family.

‘I’m sobbing too as I wonder if there are any decent people left in this horrible world. One where I don’t really want to be in anymore.’

Another wrote: ‘You can’t understand it, nor would you want to, because it’s inexcusable. That these people find joy in inflicting pain on people already in pain is beyond any sane person. It might not help now, but you are not alone, many grieve with you.’ 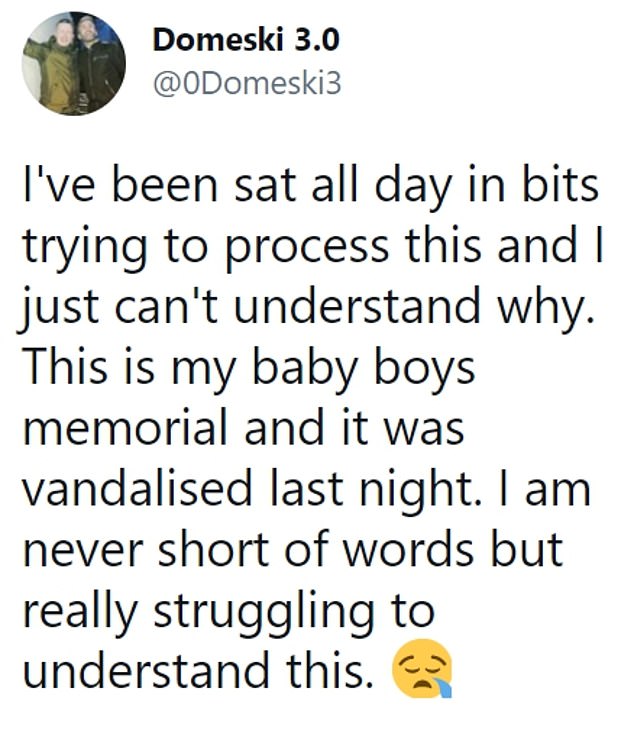 One more said:  ‘Absolutely appalling, I’m so sorry. Looks like it says ‘covid hoax’ too? People are really having their brains destroyed by conspiracy theories.’

Others commented with words of condolence such as: ‘No decent human being would be able to understand this, so please, don’t upset yourself any further by trying to get your head around it.

‘Just know that the vast majority of people out there share your horror, and good to see how quickly people rallied round to clean it up. ‘

The pictures were also shared on Facebook, with one mum writing there: ‘As the mum of two babies buried locally I appreciate how important their resting place is, so my heart goes out to the parents of the babies whose memorial this is. Absolutely heartbreaking.’

Police are now hunting those responsible but have not made any arrests as yet.

A spokesperson for the Dunfermline Police said: ‘Around 10.05am on Saturday May 1, police were contacted with regard to a vandalism at a baby memorial within Dunfermline Cemetery, Halbeath Road, Dunfermline.

‘Officers have attended and the graffiti has been removed.

‘Inquiries, which are at a very early stage, are continuing.’

The graffiti has since been cleaned up, which residents in the town hailed as ‘good news’ on social media for moving so quickly.