Kamala Harris will address the Washington Conference on the Americas from the White House on Monday morning where she will hold her first public event related to her role as ‘border czar.’

The vice president is expected to underline her role addressing ‘root causes’ of migration in Northern Triangle countries, according to experts of her address released by the White House Monday evening.

‘We want to help people find hope at home,’ Harris will say in encouraging people to stay in their home countries. ‘And so we are focused on addressing both the acute factors and the root causes of migration.’

‘Our Administration is implementing a comprehensive strategy with governments, international institutions, the private sector, foundations, and community organizations,’ she will detail. ‘The idea here is that our work will be coordinated— and that every sector will have a role to play.’

Harris has held two closed-door meetings with outside experts and philanthropists related to the mass migration crisis at the southern border. 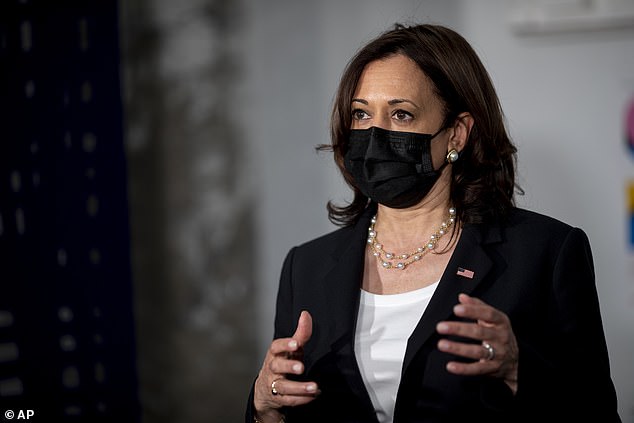 She hasn’t however visited the border or before this point held any public remarks or events in her capacity in the five weeks since being named in charge of the crisis.

On Monday, Harris will deliver her remarks to the conference from the White House in a live-streamed event.

Republicans have been highly critical of Harris not visiting the border to see the humanitarian crisis for herself – and largely remaining silent publicly on her role.

The White House has repeatedly tried to rebrand Harris’ position, claiming she is looking to help fix situations in Honduras, Guatemala and El Salvador to help quell migration to the U.S. by making situations in Central American countries more desirable.

Since she was named ‘border czar’, Harris has traveled to many other places in the U.S. other than the border, where she has touted the $1.9 trillion American Rescue Plan and Biden’s proposed trillions in spending for real and ‘human’ infrastructure development.

This has garnered even more criticism from those on the left who say she isn’t taking her role – or the crisis – seriously.

The White House says it is planning a trip for Harris to visit Guatemala and Mexico this summer, but she will not stop at the border.

This week, the administration also plans to start reuniting families separated under former President Donald Trump’s ‘zero tolerance’ immigration policies, which led to thousands of children being separated from their families.

Department of Homeland Security Secretary Alejandro Mayorkas said in a call with reporters Sunday night that four families of the estimated 1,000 that remain separated will be reunited this week.

Two of the four include mothers – one Mexican and one Honduran – who were separated from their children in 2017, Mayorkas detailed without providing their identities.

He described the range of children from 3-years-old at the time of separation to ‘teenagers who have had to live without their parent during their most formative years.’

Harris’ remarks Monday come as pictures from border facilities released by the DHS Monday show a more optimistic image of the crisis.

The images show the McAllen, Texas holding and processing facility nearly empty, when pictures from the same facility last month showed overflowing pens with children nearly stacked on top of each other on mats on a concrete floor with mylar blankets.

Mayorkas also revealed there was an 88 per cent drop in the number of unaccompanied minor migrants in Customs and Border Protection custody compared to five weeks ago.

These children, for the most part, are likely still in federal custody, just transferred from CBP facilities to Health and Human Services facilities that are better equipped and staffed to handle the cases and work on reunification with their family.

New numbers from over the weekend show only 677 unaccompanied minor migrants remain in CBP facilities compared to March 28, when there were 5,767.

CBP has been able to almost double the rate it processes children and more quickly transfer them to shelters and emergency housing facilities set up by HHS.

Despite the expediting processing, the number of illegal crossings have not slowed.