One wrong turn and a motorist has found themselves stuck in a logging trail and in ‘need of a new set of pants’ during a Sunday afternoon drive.

The driver of an SUV was spotted on April 18 wedged between two narrow tracks after driving down a logging trail in Hampton Forest, three hours west of Sydney.

The occupants of the car were found safe and uninjured just 20 metres from a steep drop into a valley.

One reason the driver may have attempted such a dangerous route is because the popular Jenolan Caves Road at Hampton has been closed.

The Oberon Fire and Rescue team warned the public of the dangers associated with unsealed roads in a Facebook post on Monday. 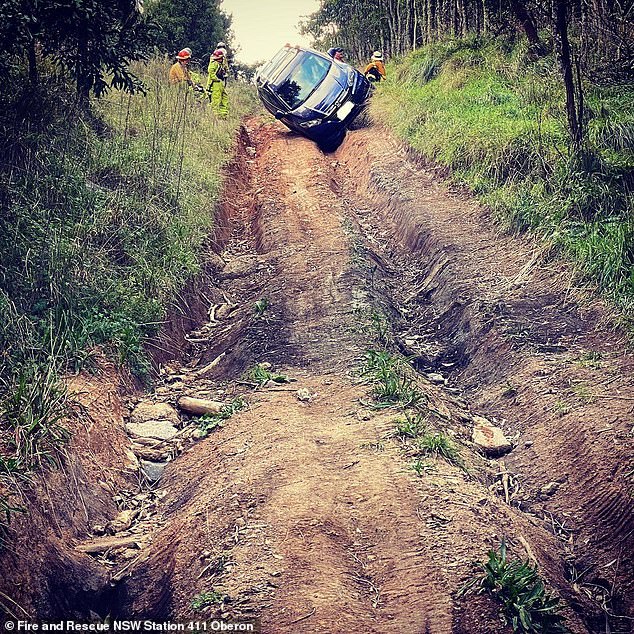 The driver of an SUV was spotted on April 18 wedged between two narrow tracks after driving down a logging trail in Hampton Forest, three hours west of Sydney

The post cautioned that the area has very little mobile phone service which makes it difficult to summon help if you get into trouble.

Those that saw the terrifying image attached to the post were quick to criticise the car’s occupants.

‘The dumb nuts required a tow truck. I hope the fire and rescue handed them a bill for the wasted trip, while seriously injured accidents might have been delayed because they were with these dumb nuts,’ one wrote.

‘More brains in the trees,’ another commented.

‘This is what happens when you let city people out to play in the country, idiots shouldn’t be allowed out in the real world,’ a third wrote.