Countries in the Middle East have dominated a list of the world’s top executioners in 2020 with more than 400 executed, Amnesty International revealed today.

Iran, Egypt, Iraq and Saudi Arabia accounted for 88 per cent of the at least 483 people who were executed.

But China topped the list as the ‘world’s leading executioner’ after the country executed thousands of prisoners last year.

The human rights watchdog said China ‘continued to execute and sentence to death thousands of people’ but said the country’s exact figures were ‘kept secret’.

Around the world, confirmed executions fell 26 per cent to a 11-year low of 483, but that does not include any of the suspected thousands in China. 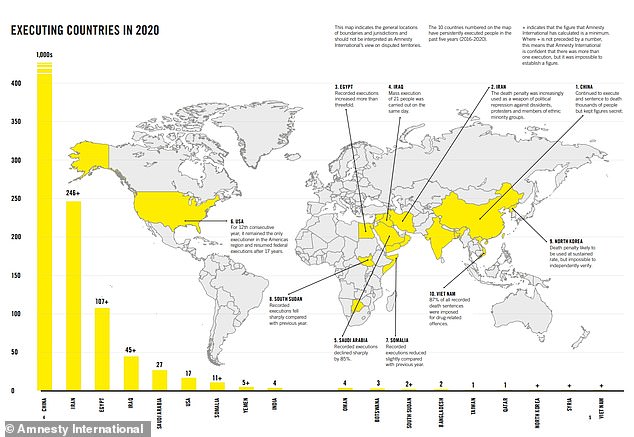 This map from Amnesty International shows the countries that carried out executions last year. China is believed to have carried out far more than any other country, but the figures are not made available

State secrecy in North Korea and Vietnam also made it impossible to verify reports on the number of executions in the two countries.

Amnesty said the Covid-19 pandemic in part contributed to the reduced number of executions and the death penalties imposed last year.

Iran executed at least 246 people including three people who were under 18 when they committed the crime, Amnesty said.

The watchdog added that the death penalty in Iran ‘was increasingly used as a weapon of political repression against dissidents, protesters and members of ethnic minority groups’.

Amnesty also drew attention Egypt where recorded executions increased more than threefold with at least 107 people being executed compared to 32 in 2019. 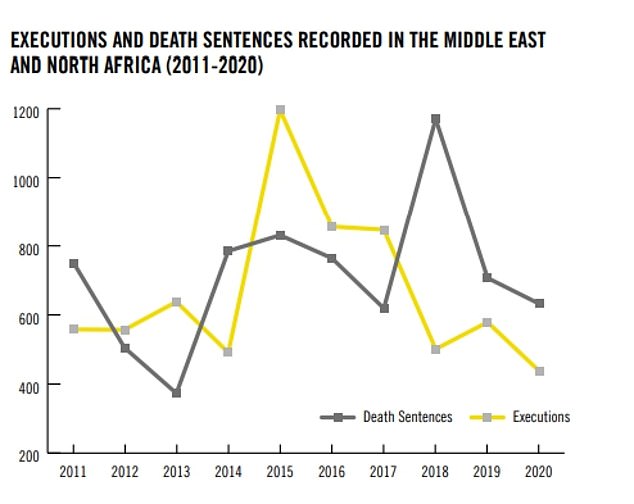 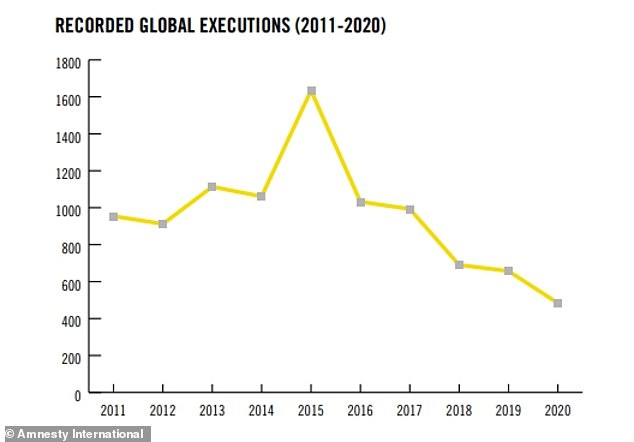 Around the world, confirmed executions fell 26 per cent to a 11-year low of 483, but that does not include any of the suspected thousands in China

The 2019 statistics are published in Amnesty’s Death Sentences and Executions 2019 report which was released today.

According to Amnesty’s figures, 18 countries are known to have carried out executions last year. The countries used methods including beheading, electrocution, hanging, lethal injection and shooting.

Meanwhile in Iraq at least 45 people were executed – with a mass execution of 21 people being carried out in a single day.

While Saudi Arabia was in the world’s top five executioners with at least 27 reported deaths, the recorded executions declined sharply by 85 per cent from 184 in 2019.

Amnesty suggest the pandemic in 2020 could have disrupted planned executions in Saudi Arabia as well as the country’s presidency of the G-20 summit.

‘Saudi Arabia’s hosting of the G-20 summit might have influenced the authorities not to carry out executions to avoid international scrutiny and criticism,’ the watchdog said in the report. 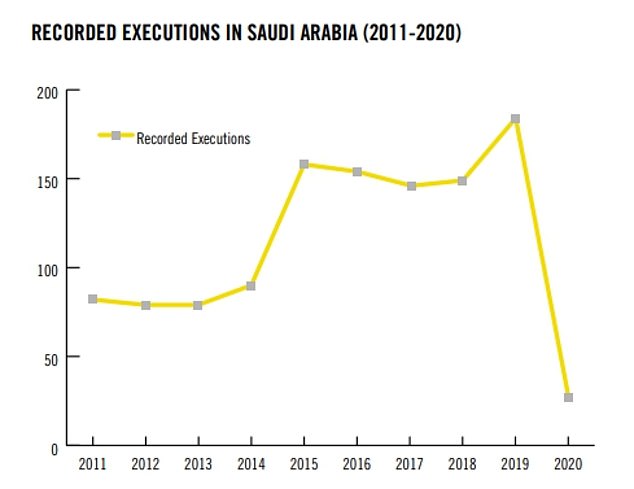 While Saudi Arabia was in the world’s top five executioners with at least 27 reported deaths, the recorded executions declined sharply by 85 per cent from 184 in 2019

According to Amnesty’s figures, 18 countries are known to have carried out executions last year. The countries used methods including beheading, electrocution, hanging, lethal injection and shooting

China, which carries out executions by lethal injection and shooting, is thought to have executed people for crimes including not following Covid-19 restrictions, non-violent acts and drugs offences.

‘China remained the world’s lead executioner, continuing to classify figures on executions and death sentences as a state secret and preventing independent scrutiny,’ the report says.

‘Although it is possible that a reduction in the use of the death penalty occurred in recent years, Amnesty International believed that the number of death sentences imposed and executions carried out in 2020 remained in the thousands.

As in previous years, Amnesty International’s monitoring suggested that the death penalty was used in most cases to punish murder and drug-related offences, out of the 46 offences for which it remained applicable.

‘Among these were many non-violent acts that do not meet the threshold of the “most serious crimes” under international law and standards.’

Amnesty accused China ‘resorting to the death penalty to send a public message’ while the country struggled with Covid-19.

Meanwhile, Amnesty accused Qatar of taking ‘an alarming step backwards’ by executing a person for the first time in 20 years. A Nepali man was shot by firing squad in May after he was convicted of murder.

‘As the world focused on finding ways to protect lives from Covid-19, several governments showed a disturbing determination to resort to the death penalty and execute people no matter what,’ Agnès Callamard, Amnesty’s secretary general, said.

‘The death penalty is an abhorrent punishment and pursuing executions in the middle of a pandemic further highlights its inherent cruelty.’