These stunning photos show the harsh reality of life for Mongolian nomads who live on the country’s vast steppe.

Hundreds of nomads live in the 340,000 square miles of open grassland, where temperatures regularly drop to -40C (-40F), and subsist off their herds of animals, eating a diet of only milk and meat.

Vegetables are often omitted from their diet because nomads do not have gardens, or vegetable patches, and shops are usually at least a day away.

They have populated the steppe for millennia and are one of the world’s last remaining nomadic communities.

Italian photographer Michele Martinelli, 41, captured the images of this rare community during a 20-day trip to the Mongolian steppe in April 2017. 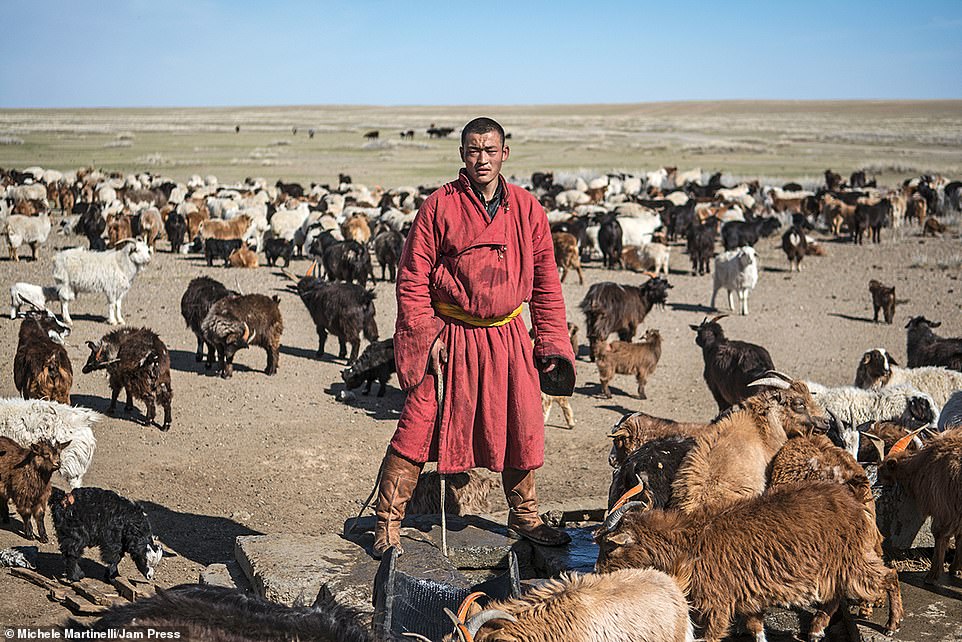 Nomadic life revolves around yurts, or ghers, meaning home or household, which are compactible and easily transportable circular houses.

Mongol nomads transport these houses across the steppe between two and four times every year when they migrate to find the best pasture for their animals. 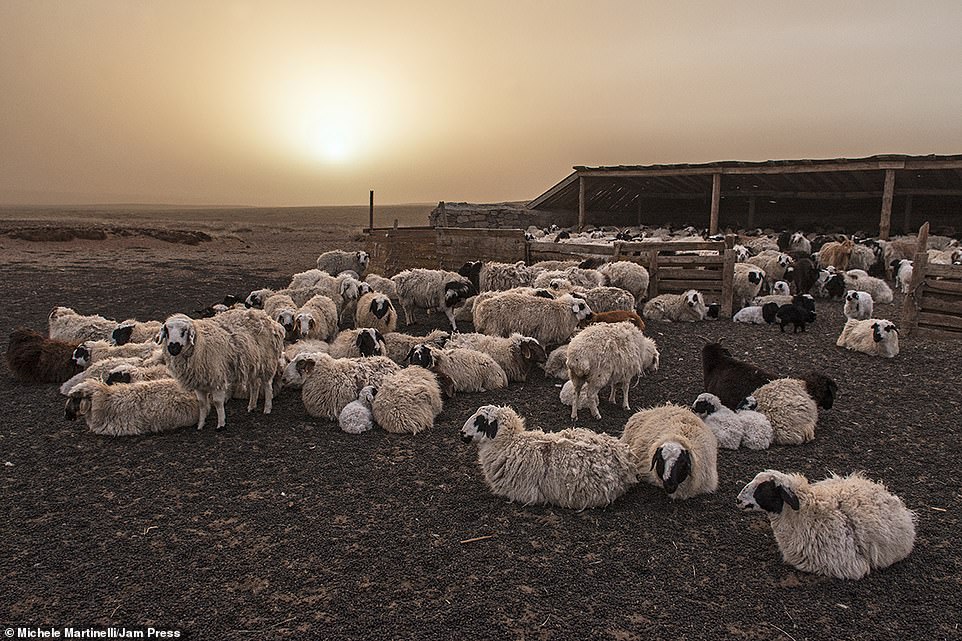 Migration: Nomads migrate with large herds of animals, including sheep, goats, cows, horses, camels, and yaks, between two and four times every year 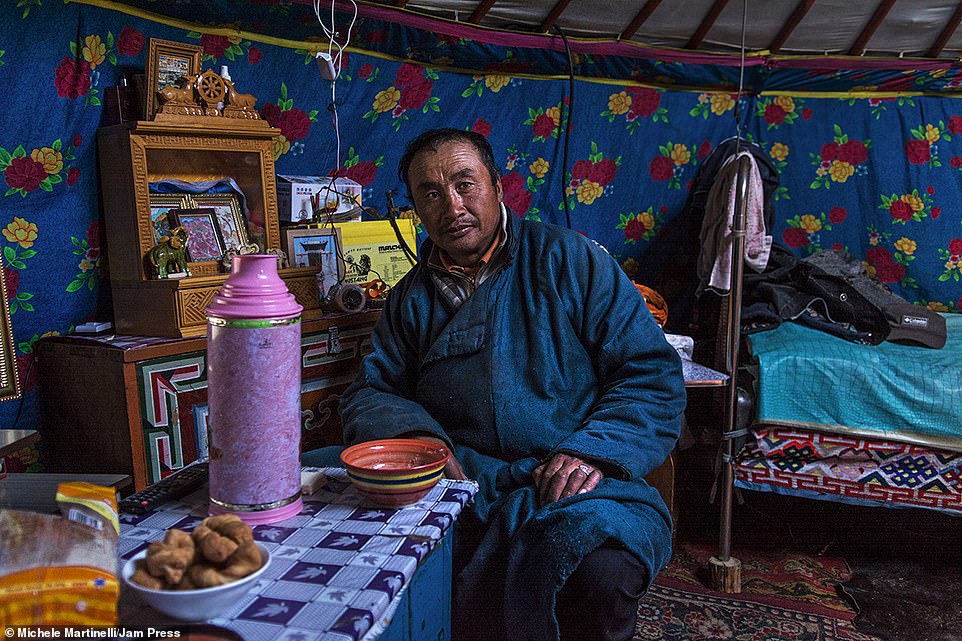 Nomads survive on a diet of only milk and meat. Vegetables are often omitted from their diet because nomads do not have gardens, or vegetable patches, and shops are usually at least a day away. 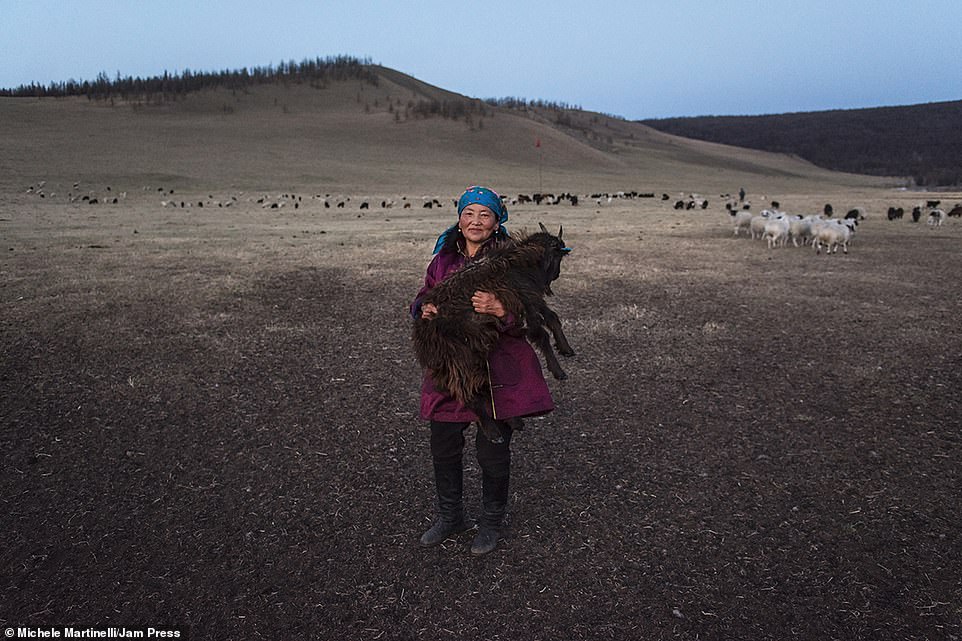 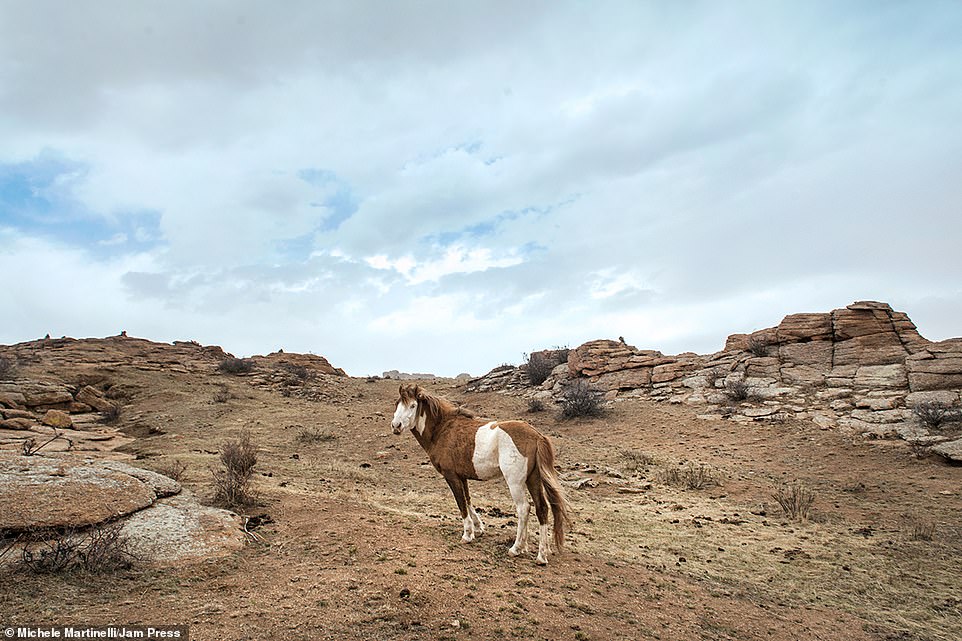 Horses were first prized by Mongols under Ghengis Khan because of the advantages they offered in warfare, such as being fast and flexible in combat 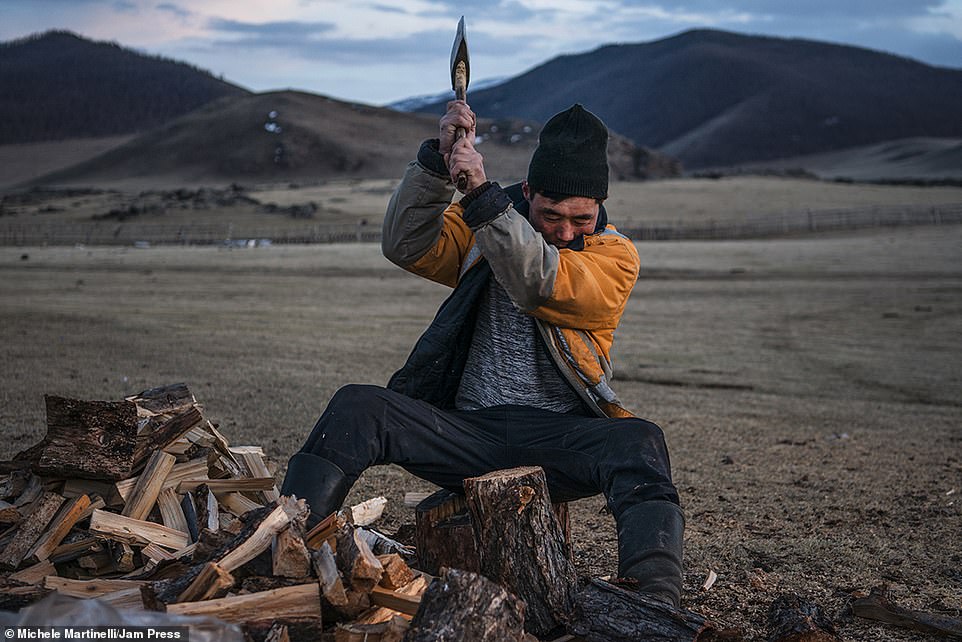 Hard work: A young man cuts wood that will be used to heat his yurt

Between February and April, nomads typically brave temperatures of -40C to make a 100-mile trek across the Altai mountains in western Mongolia.

Though many of the family’s wordly goods can now be moved by truck, the animals still need to cross the mountains on foot.

Women are heavily involved with caring for their family’s animals and regularly milk the yaks and sheep early in the morning. 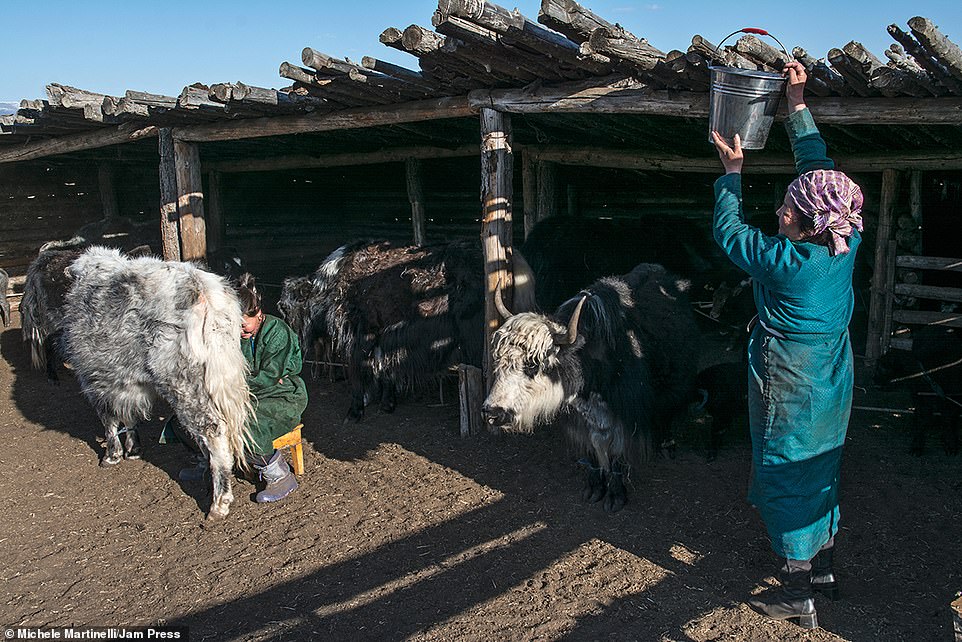 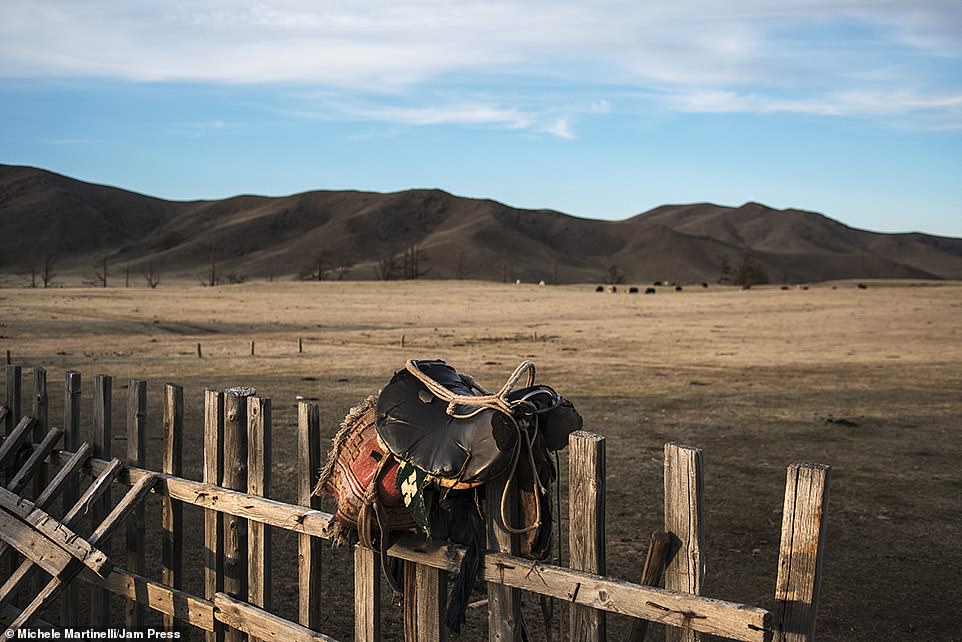 Rest: A typical Mongolian saddle sits on a fence ready to be used 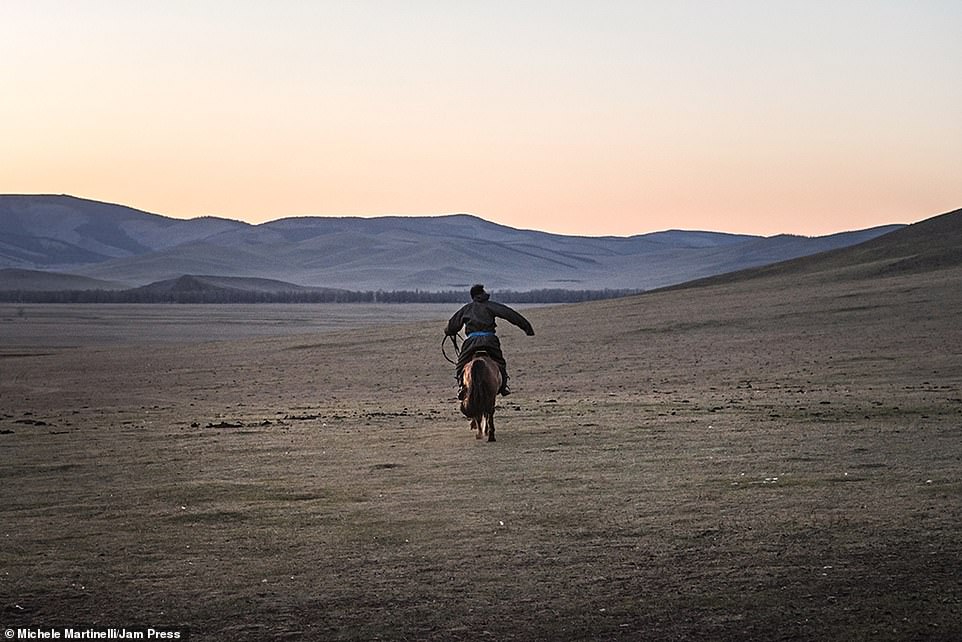 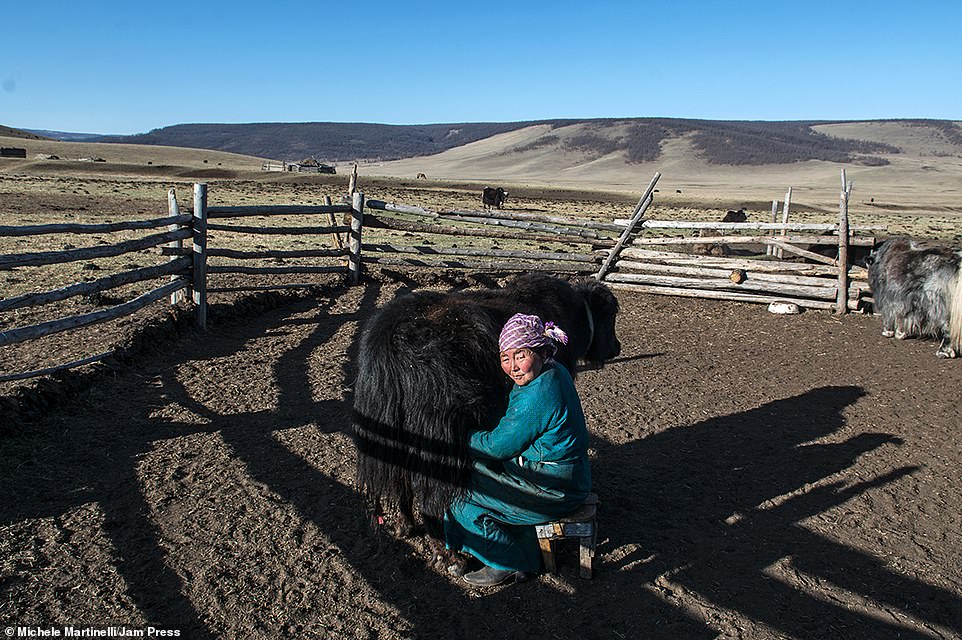 Barren: A woman milks her yak looking out over the wild and empty landscape only filled by nomads yurts ahead of her 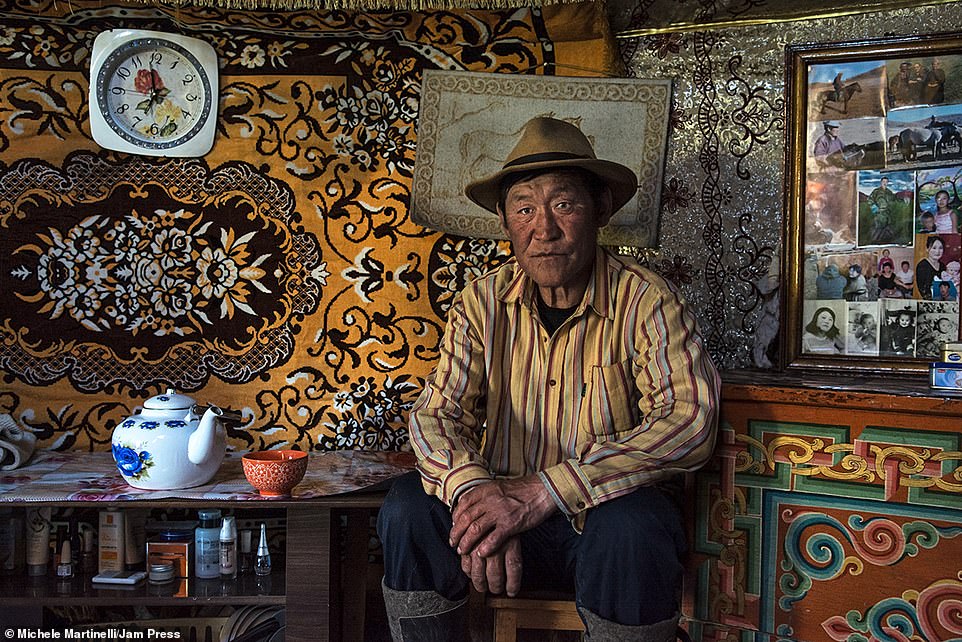 Tasty: A man sits inside his yurt drinking Kumis, a fermented milk drink typically made with milk from a mare or donkey

Nomads also make their own butter, yoghurt, cheese, milk tea, and milk sweets, as well as Kumis, a fermented milk typically made with milk from a mare or donkey.

The Mongolian Steppe sits between the forests of Siberia and the harsh terrain of the Gobi Desert.

Nomads take advantage of the terrain and train eagles to be used for hunting.

Each October nomadic communities take part in the Golden Eagle festival which involves pitting the birds against each other in competitions. 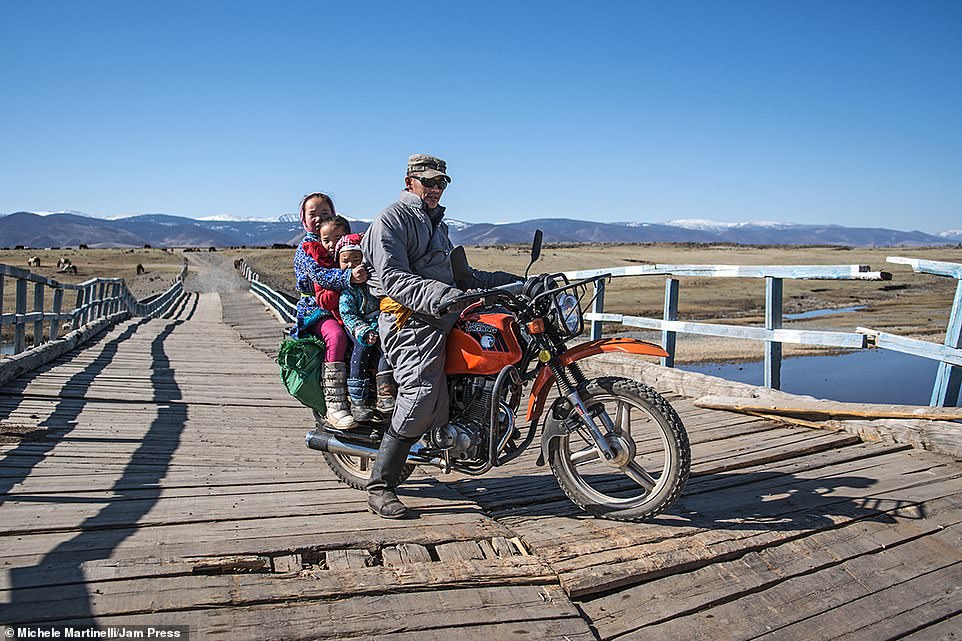 A man is dropping his children off at school in the nearest town. They wills study away from home for the next few months and return when the school year finishes 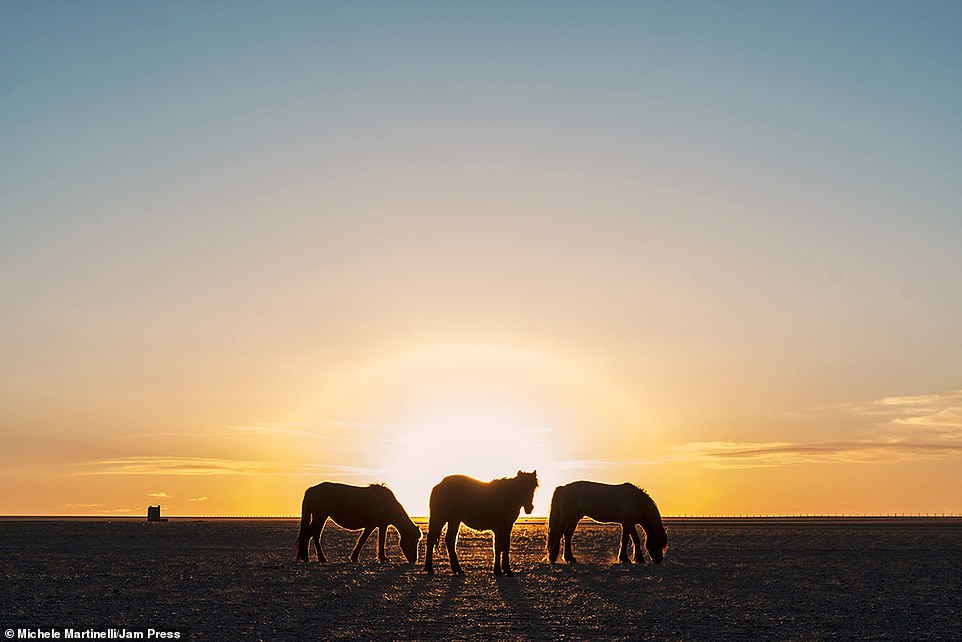 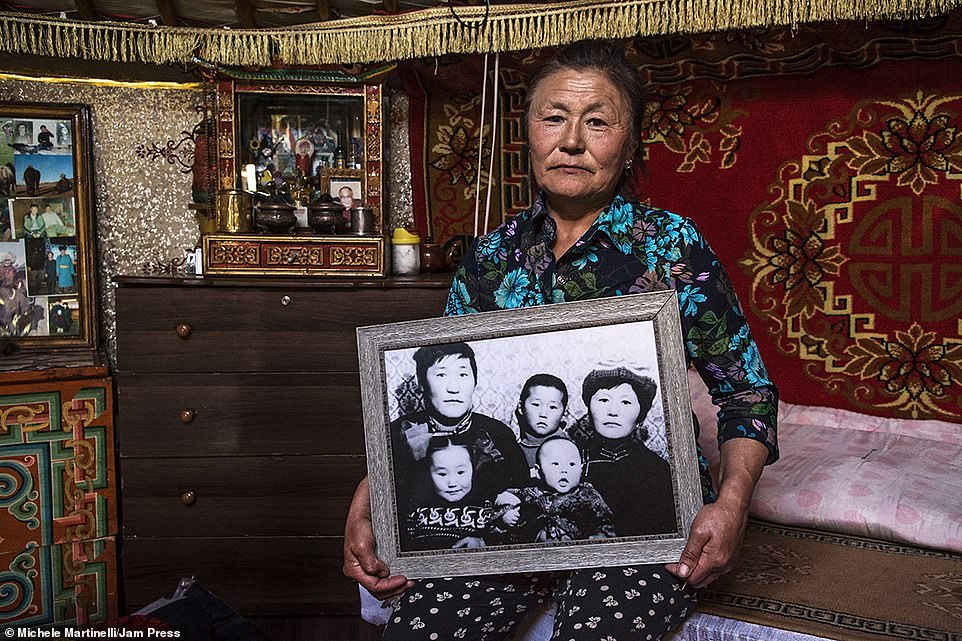 Many Mongolian children chose to abandon the steppe and seek education and work in the country’s capital, Ulan Bator 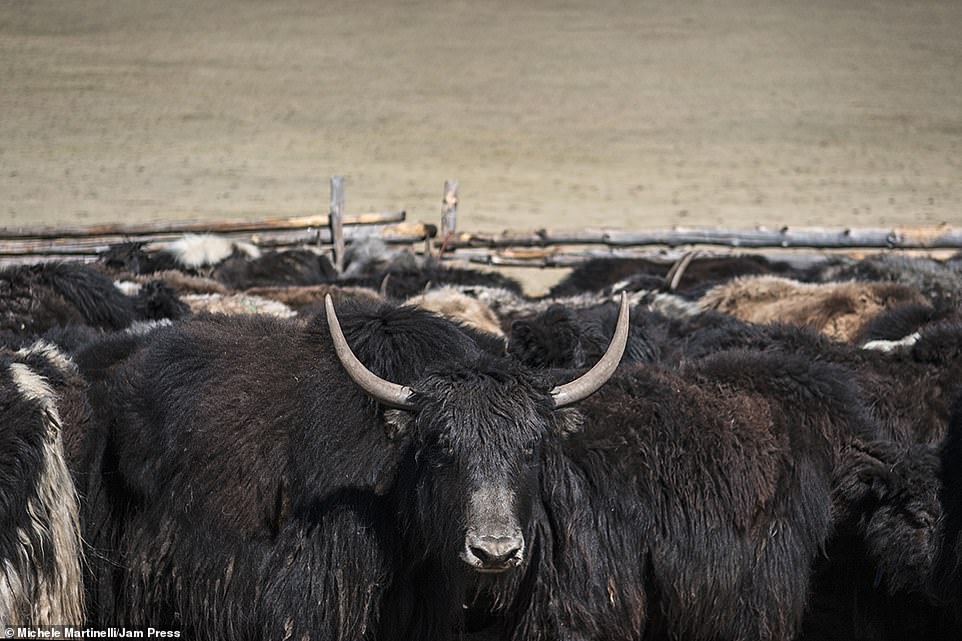 Yaks are used by the nomads to transport heavy loads and plough fields. They also provide milk, meat, wool and furs for the family 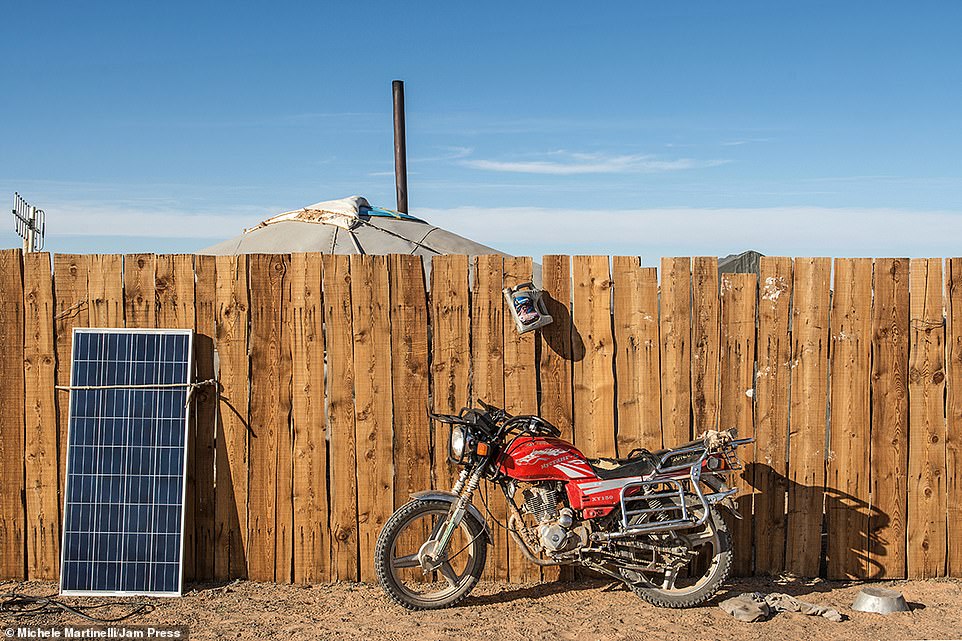 Electricity: Nomads use solar panels to charge a battery which powers small devices, such as televisions and mobile phones. The electricity can also be used to charge batteries of motorcycles 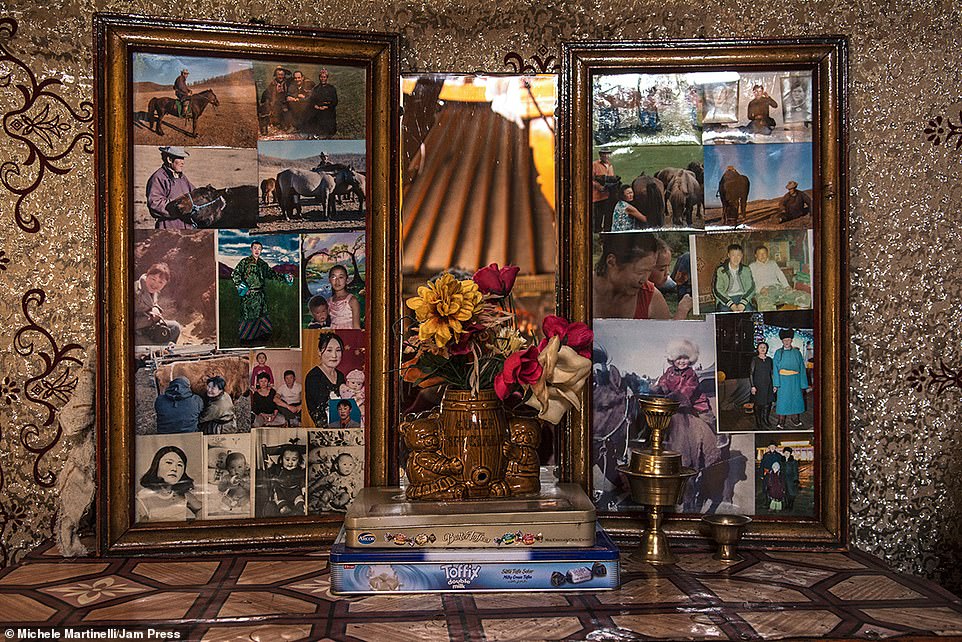 Nomadic families decorate the inside of their yurt with pictures of both ancestors and relatives, creating a family history mosaic 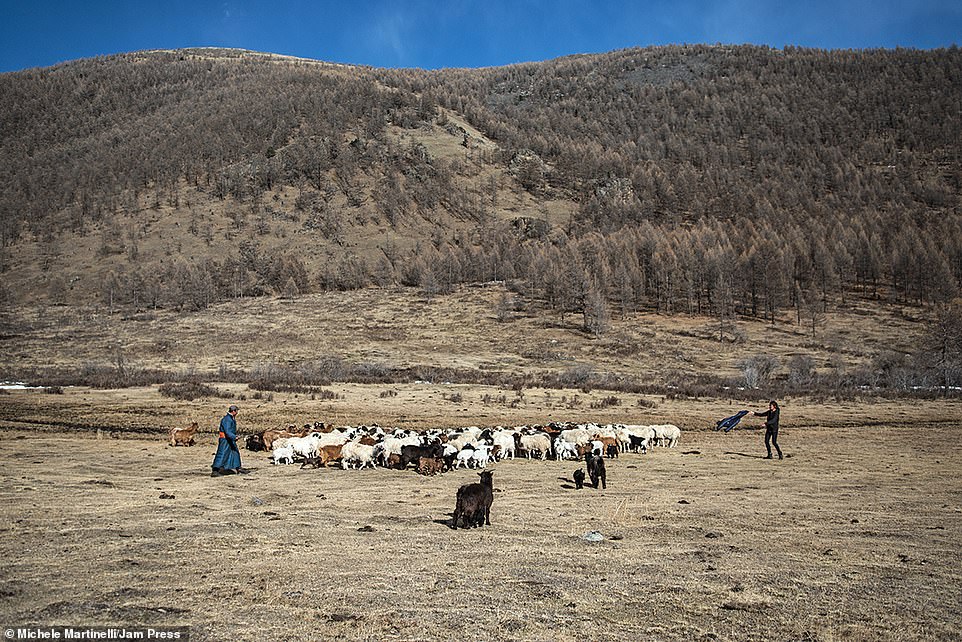 Hard work: A father and his daughter corral their flock of sheep and goats towards enclosures where they will spend the night in safety 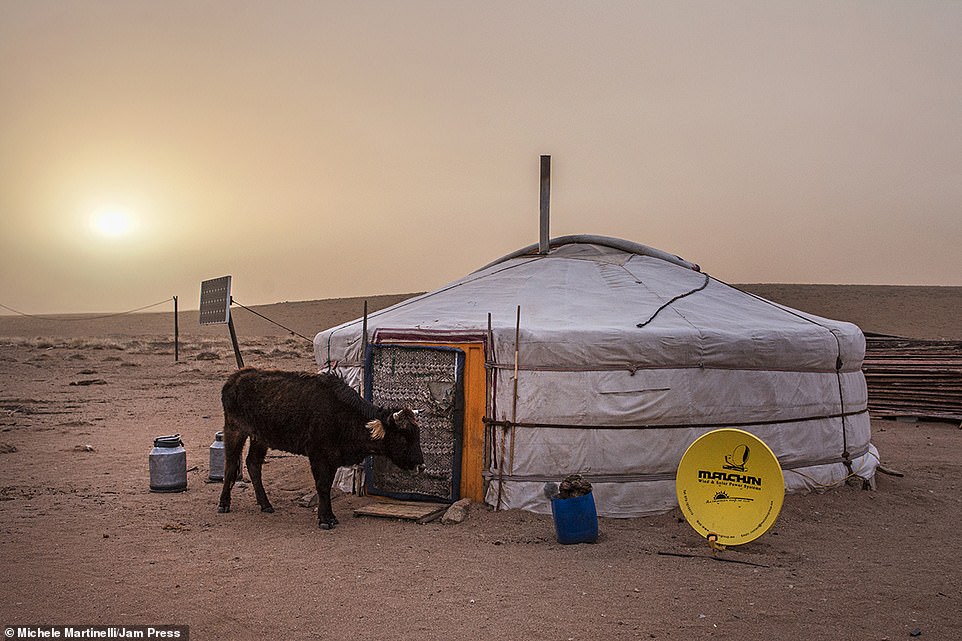 Nomadic life revolves around yurts, or ghers, meaning home or household, which are compactible and easily transportable circular houses 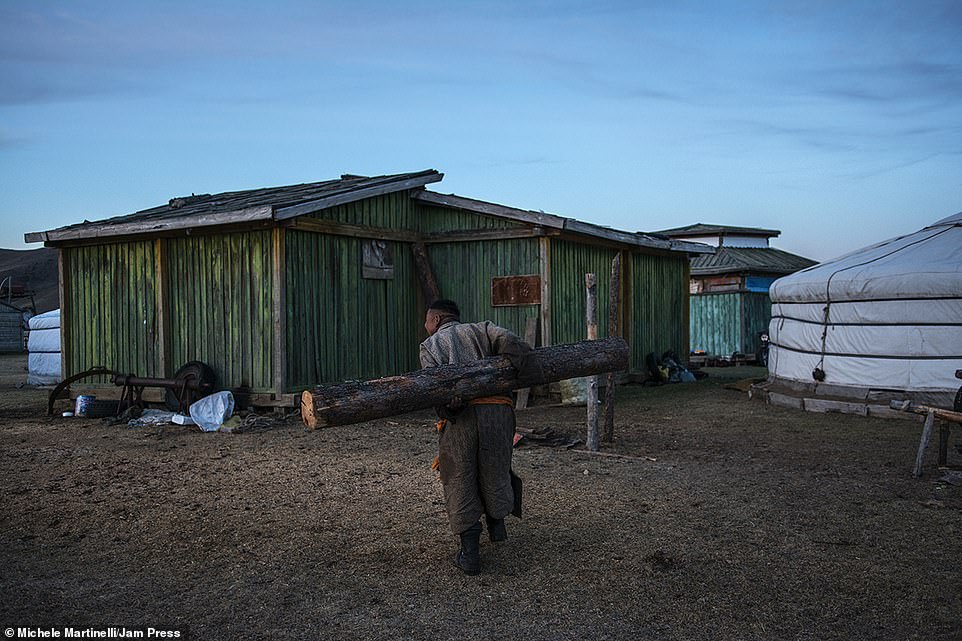 Nomads set up camp near the numerous coniferous woods found on the Mongolian steppe. The timber is fundamental to their way of life 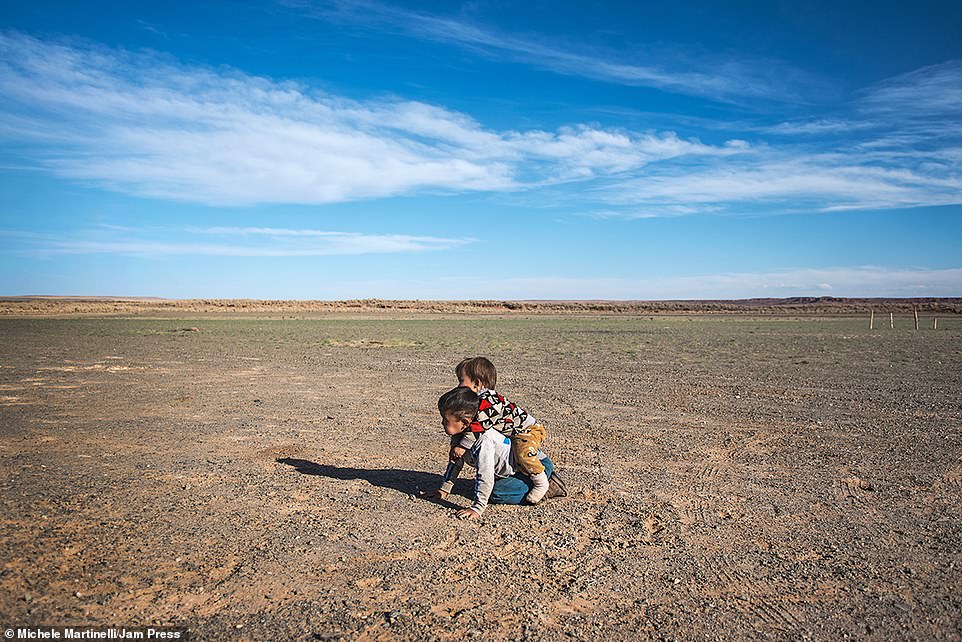 Rough and tumble: Two nomadic children play on the Mongolian steppe where they are taught to ride when they are toddlers 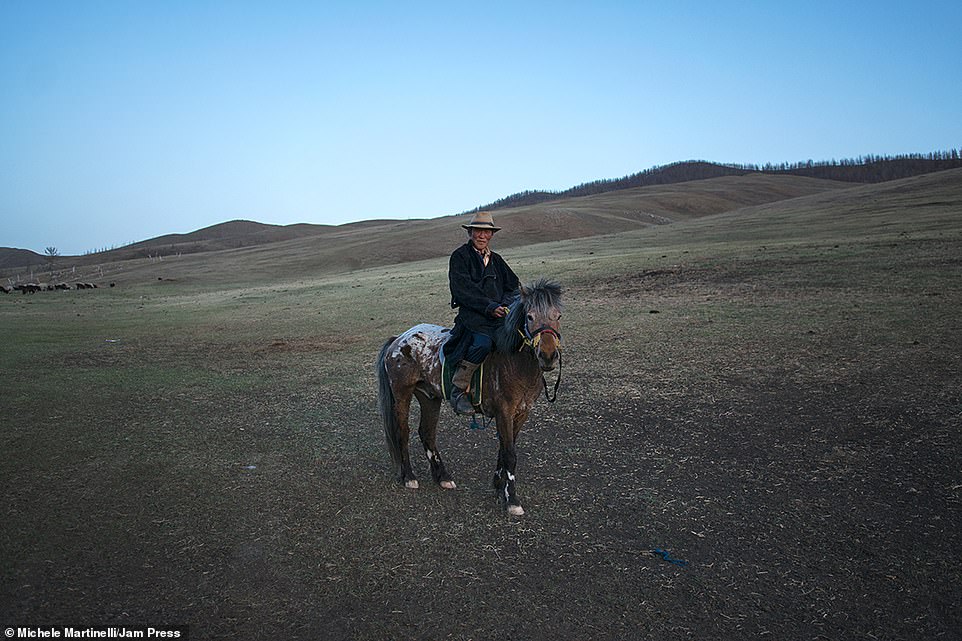